The Story Of Anne Hutchinson, The Fearless Puritan Woman Who Took On Colonial Boston’s Religious Patriarchy

In the late 1630s, Anne Hutchinson made a name for herself in the Massachusetts Bay Colony as an outspoken religious reformer — and garnered the ire of male religious leaders. 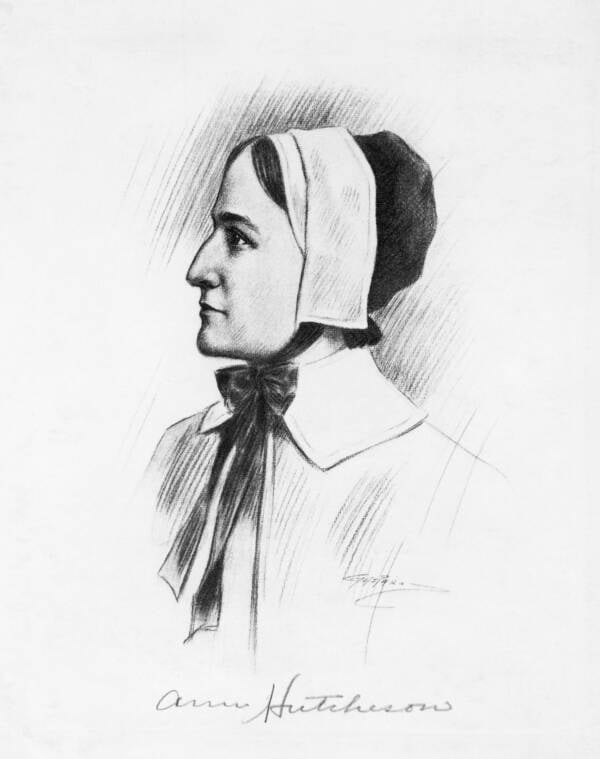 Bettmann/Getty ImagesA drawing of Anne Hutchinson, who was banished from Boston and considered “an instrument of Satan” because she was an outspoken woman.

Puritans living in the Massachusetts Bay Colony in the 17th century claimed they had fled England because they valued religious freedom, but even for them, Anne Hutchinson was a step too precocious.

The daughter of a Puritan minister, Hutchinson came to believe that people could establish a personal relationship with God to ensure their entry into heaven, regardless of their behavior on earth. She preached her ideas around Boston, and soon gathered a following of as many as 80 people.

But Hutchinson’s ideas — and the fact that she preached to both women and men — drew the scorn of many male religious leaders in Boston, whose own powers were threatened by her influence. They saw her as a dangerous heretic and set out to take her down.

Who Was Anne Hutchinson?

Born in 1591 in Lincolnshire, England, Anne Hutchinson grew up with the guidance of her father, a Cambridge-educated Puritan minister named Francis Marbury. Marbury ensured his daughter had an education and deeply influenced her thinking about religion and authority.

Like Hutchinson, Marbury was a free-thinker who often clashed with those in power. According to History of Massachusetts, Marbury challenged Anglican authority so many times that he was accused of heresy in London — almost 60 years before his daughter faced the same charges in Boston.

Hutchinson too sought out untraditional ideas in adulthood. She and her husband William, who she married in 1612, became fervent followers of Puritan minister John Cotton. According to History, Cotton preached controversial ideas about predestination and free will, and Hutchinson supported him by spreading his message to other women. 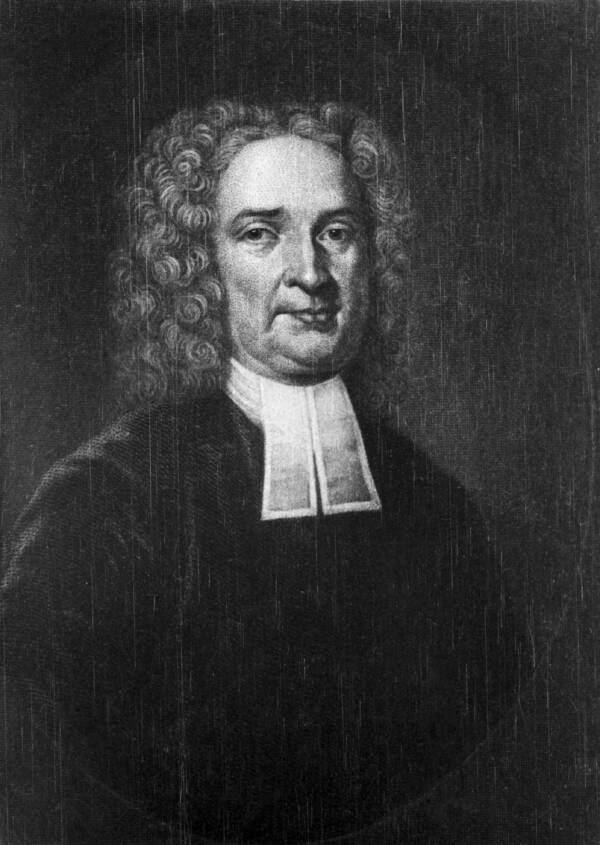 Bettmann/Getty ImagesJohn Cotton was a mentor to Anne Hutchinson, but later denounced her in Boston.

When Cotton decide to flee persecution in England and emigrate to Boston, Hutchinson and her husband decided to follow him. In 1634, the couple and their 10 children emigrated to “the New World.”

There, before long, the 43-year-old Anne Hutchinson would cause waves among religious leaders in the Massachusetts Bay Colony. 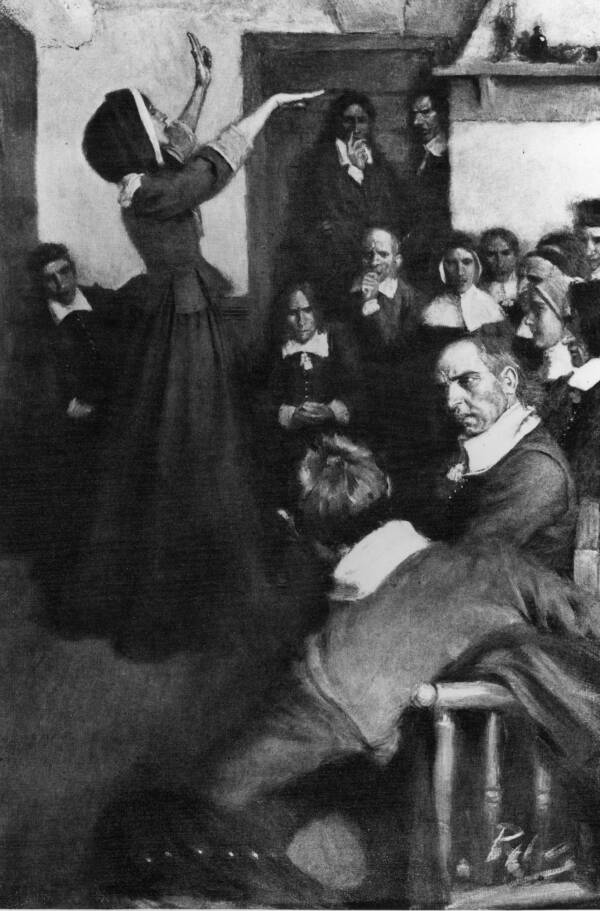 At first, things went well for Anne Hutchinson and her family in the New World. Her husband continued his trade as a cloth merchant, and Hutchinson found work as a midwife and herbalist. The couple continued to admire John Cotton, and Hutchinson supported him as she had in England by holding meetings with women in her home to discuss his ideas.

But about two years after she’d arrived in Boston, Hutchinson started to attract the ire of leaders like John Winthrop, the three-time governor of Massachusetts famous for describing the colony as a “city upon a hill.”

Anne Hutchinson, Winthrop wrote according to PBS, was “a woman of haughty and fierce carriage, of a nimble wit and active spirit, and a very voluble tongue, more bold than a man.”

He likely believed this because Hutchinson told the dozens of people who gathered at her home that faith in God alone was enough to ensure entry into heaven. In other words, someone’s deeds on Earth — for good or evil — mattered less than their faith.

This contradicted Puritan teachings, which stressed that people must live according to the Bible and perform good works. And it undermined the personal powers of Puritan ministers.

To many male leaders in Boston, that wasn’t even the worst of it. Though Hutchinson had started out by holding meetings for women, her sermons had started to attract men, too. According to the National Parks Service, women were not allowed to speak or teach in public, so Hutchinson’s ideas and sermonizing to a mixed crowd of 60 to 80 people were seen as a threat.

In November 1637, Hutchinson was put on trial for heresy. For two days, she defended herself against Winthrop who, according to Biography, declared that her sermonizing was “not fitting for your sex.” Hutchinson was further accused of being more of “a Husband than a Wife and a preacher than a Hearer; and a Magistrate than a Subject.” 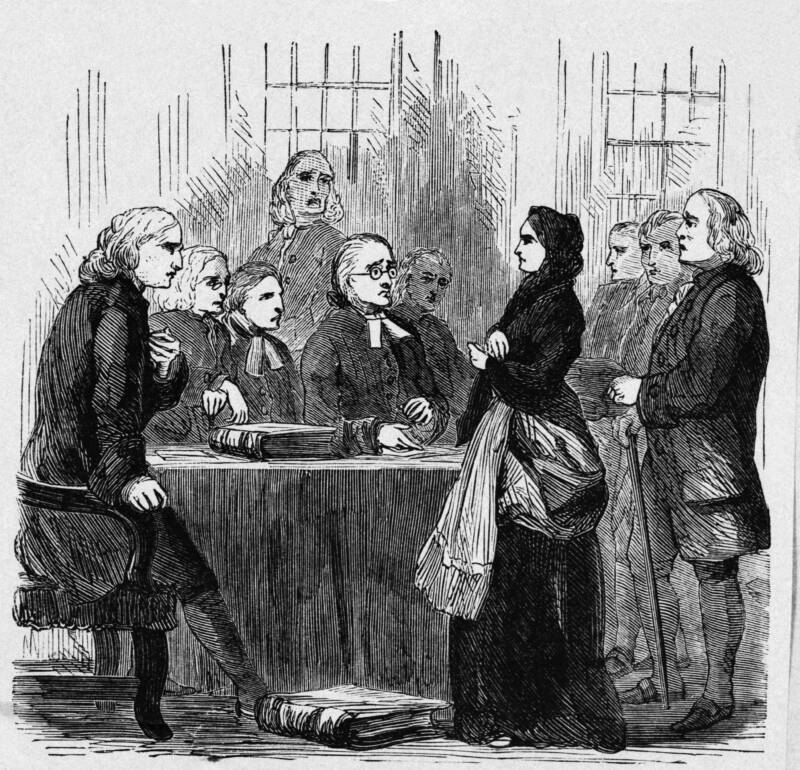 But though Hutchinson deftly sparred with her interrogators, she made a statement at the end of her trial that sealed her fate. She declared that God had spoken to her directly through an “immediate revelation” and that he would punish those who sought to convict her.

This was blasphemy. Hutchinson was promptly declared a heretic, and banished from Boston.

Even her mentor turned on her. In the aftermath of her conviction, John Cotton declared that Hutchinson’s meetings were “promiscuous and filthie coming together of men and women without Distinction of Relation of Marriage” and her ideas were “like gangrene and spread like leprosy, and will eat out the very bowels of religion.”

Forced to leave the city, Anne Hutchinson, her family, and 30 other families set out for Rhode Island in March 1638. But their trials were not yet over, and Anne Hutchinson and many of her children would soon meet a bloody end.

The ‘American Jezebel’s’ Death At The Hands Of Siwanoy Warriors 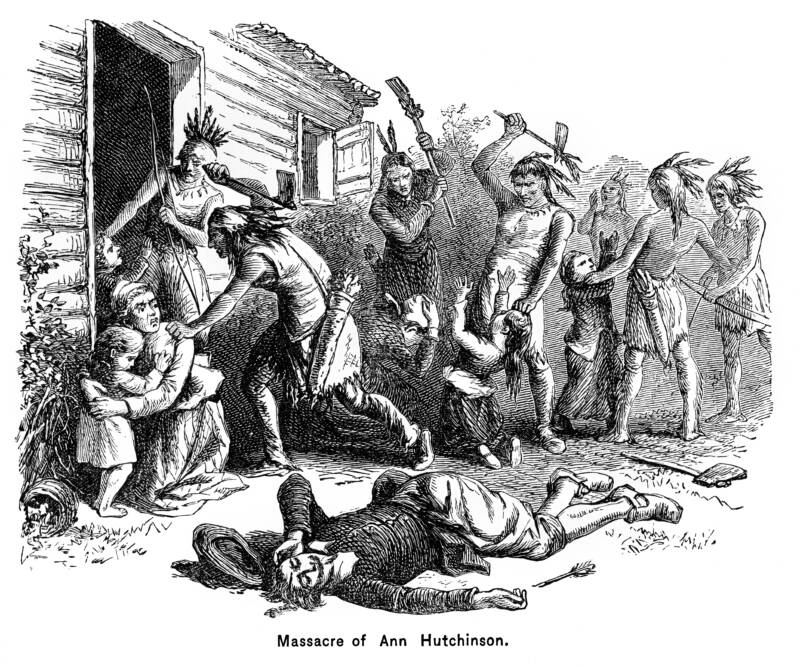 Getty ImagesAnne Hutchinson and six of her children were killed in an attack by Siwanoy warriors.

Though Anne Hutchinson had left Boston, she hadn’t escaped the wrath of its male leadership. Just a year after she and her family settled in Rhode Island, three Puritan ministers from Massachusetts paid her a visit. They demanded she recant her beliefs and, when Hutchinson refused, warned her that Massachusetts would soon take over Rhode Island.

When her husband died in 1642, Hutchinson decided to move her family further from Massachusetts. She brought them to New York in hopes of escaping the Puritan’s grasp. Instead, Hutchinson brought most of them to their doom.

In August 1643, Native American Siwanoy warriors descended upon Hutchinson’s homestead. Possibly angered by white settlement in their lands, and possibly encouraged by Puritans, the warriors massacred Hutchinson and six of her children, then abducted her nine-year-old daughter who’d been picking berries nearby.

Back in Boston, news of Anne Hutchinson’s death was met with satisfaction.

According to History of Massachusetts, Winthrop called Hutchinson an “American Jezebel” and an “instrument of Satan.” The Reverend Thomas Weld also told acquaintances in England, “The Lord heard our groans to heaven, and freed us from our great and sore affliction.”

To them, Anne Hutchinson was nothing more than a dangerous nuisance. But history has looked upon her with a kinder eye. Today, she’s seen as a proponent of religious freedom and a woman before her time.

After reading about the life and death of Anne Hutchinson, see how a stone may have solved the mystery of the Roanoke colony. Or, learn about the Darién Scheme, Scotland’s failed attempt to build a colony in the Americas.