The harrowing images in these 1830s anti-slavery almanacs helped reveal the brutality of slavery in the U.S. -- and helped end the practice.

Almanacs were a popular source of information for literate Americans starting in the 1600s, with the first of these publications focused on weather, horoscopes, and other amusements.

When the American Anti-Slavery Society (AASS) published the first Anti-Slavery Almanac in 1836 (and for years after that), they sought to educate people on the moral and ethical horrors of slavery, and included graphic images of slaves’ treatment to emphasize the un-Christian nature of the practice.

As you’d imagine, these images created quite the controversy: 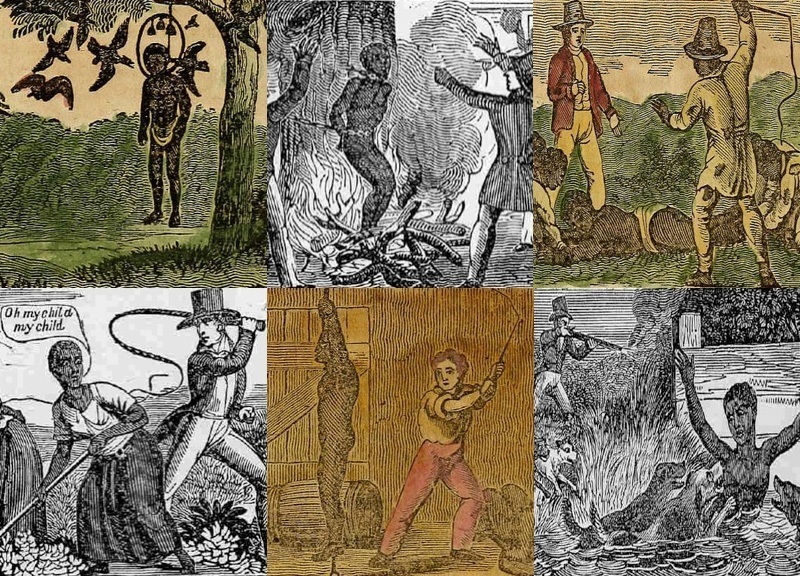 It's entirely possible that slavery wouldn't have been abolished when it was without these explosive Anti-Slavery Almanacs, starting in 1936... Image Sources: The Public Domain Review and Awesome Stories 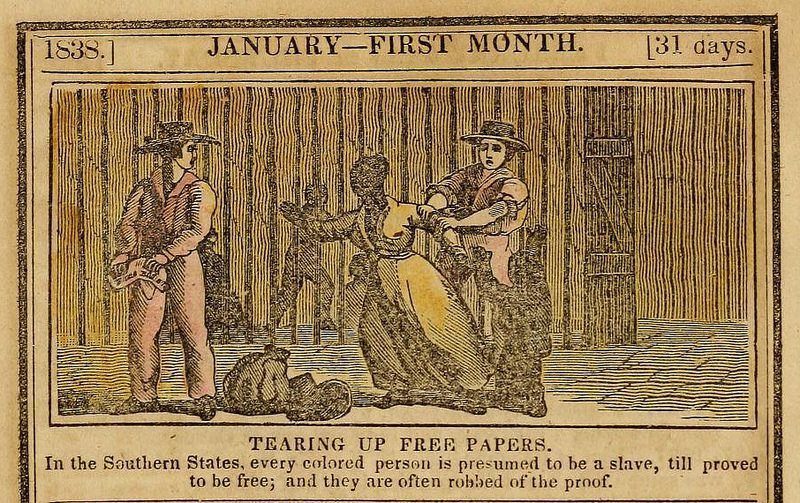 Abolitionist and editor William Lloyd Garrison was a leading figure behind the publication of these almanacs. The Public Domain Review 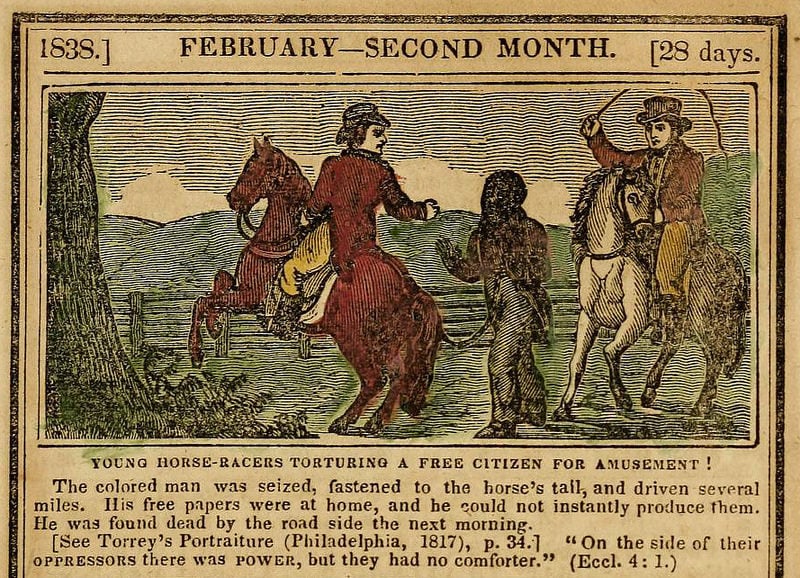 Garrison launched the newspaper The Liberator in 1831, which would clear the path for these anti-slavery almanacs to be printed.The Public Domain Review 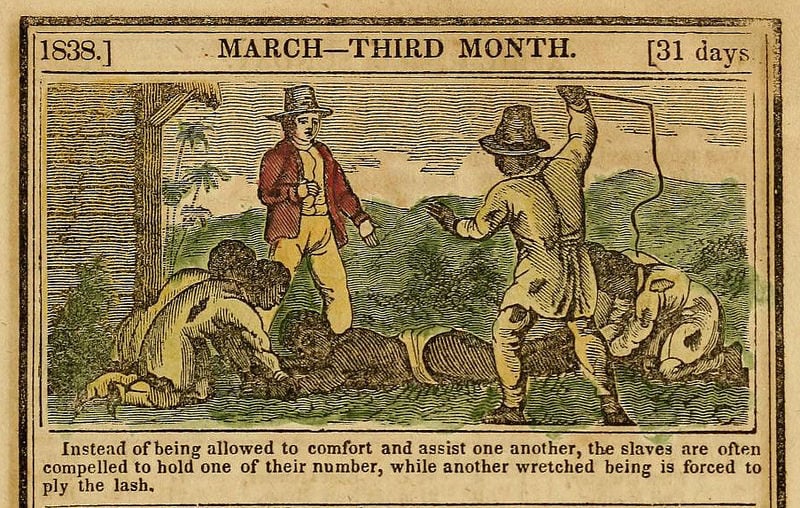 In 1832, Garrison formed the New England Anti-Slavery Society, which called for the immediate abolition of slavery, and it grew quickly. The Public Domain Review 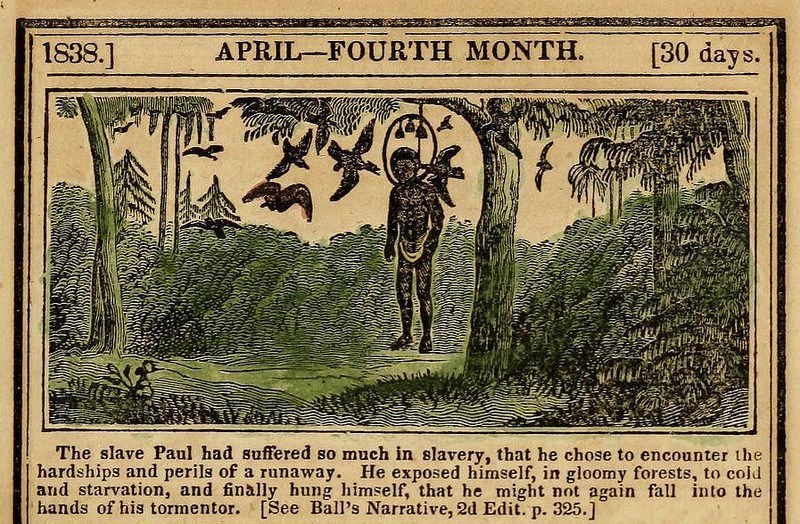 It expanded to become the American Anti-Slavery Society in 1833, and within five years topped a quarter of a million members. The Public Domain Review 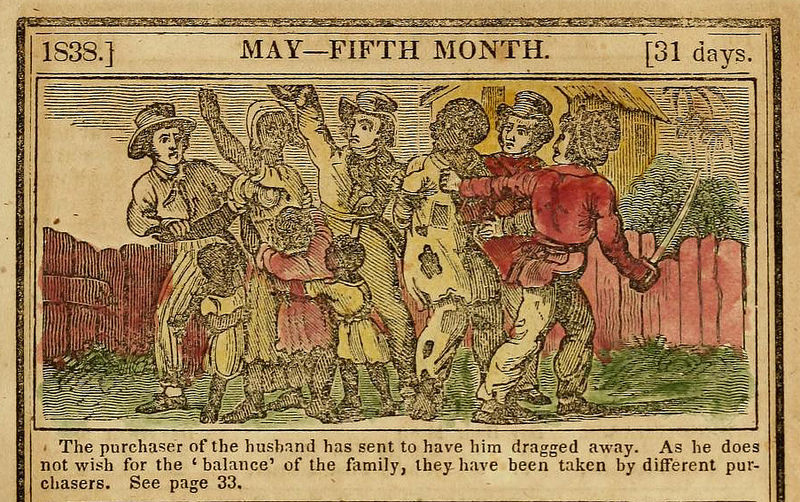 The first almanac was printed in 1836 by the American Anti-Slavery Society.The Public Domain Review 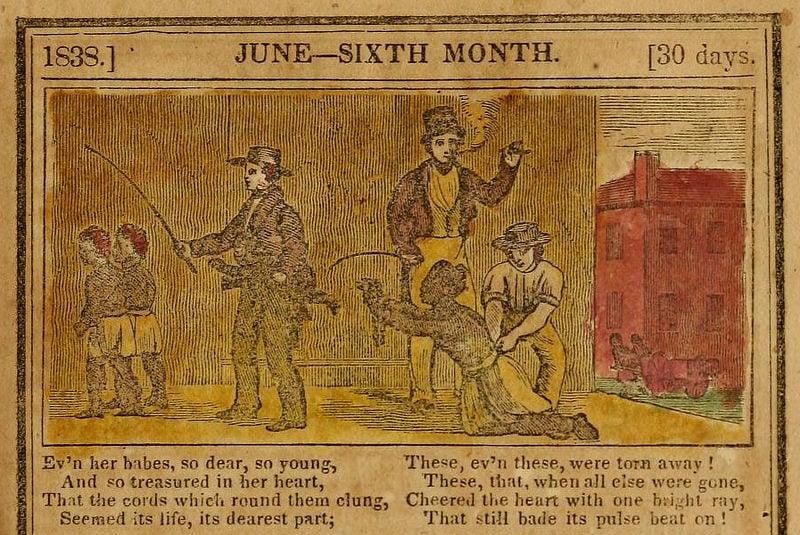 The almanacs were released annually, and featured a gruesome image to accompany each month of the year.The Public Domain Review 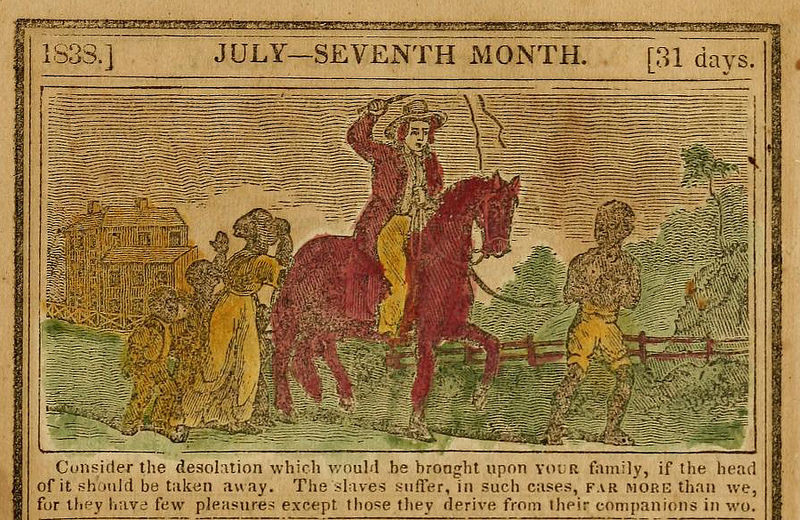 In addition to the images, made a strong written case about how deeply un-Christian the institution of slavery was.The Public Domain Review 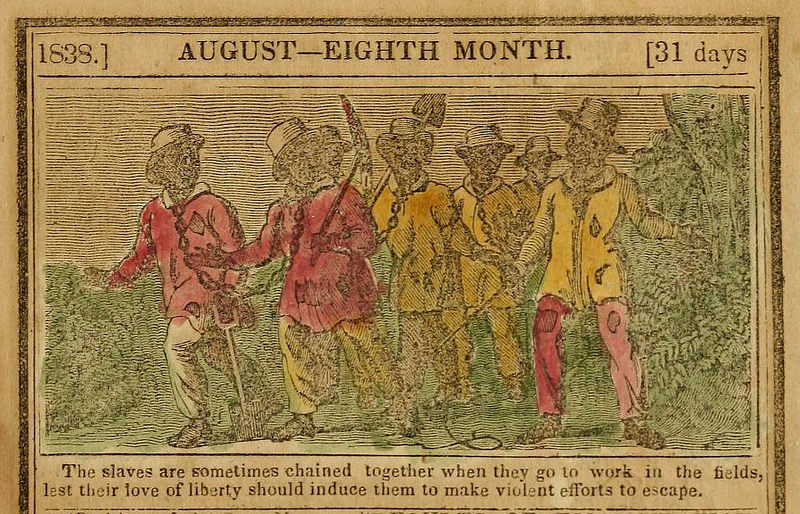 These written passages helped expose the vile treatment of slaves, including the fact that many children were separated from their families.The Public Domain Review 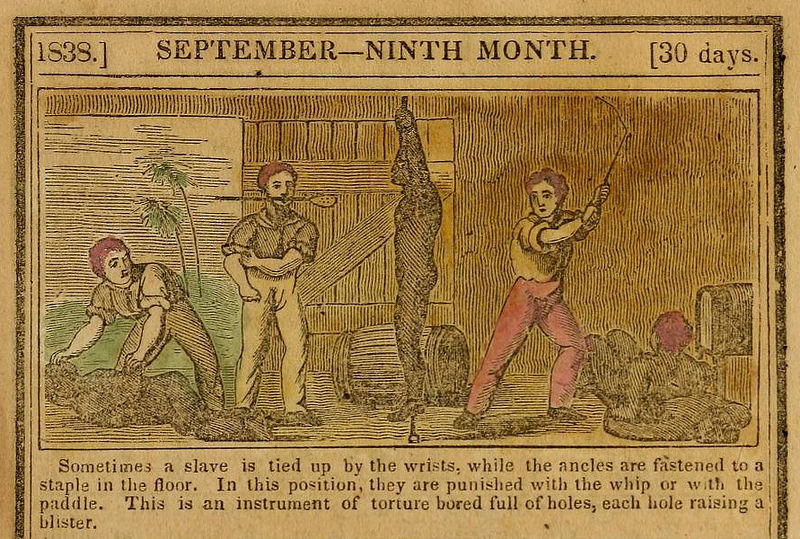 In addition the almanacs marshaled statistics to help prove their case, marking a crucial moment in U.S. history when stats became an authoritative political tool. The Public Domain Review 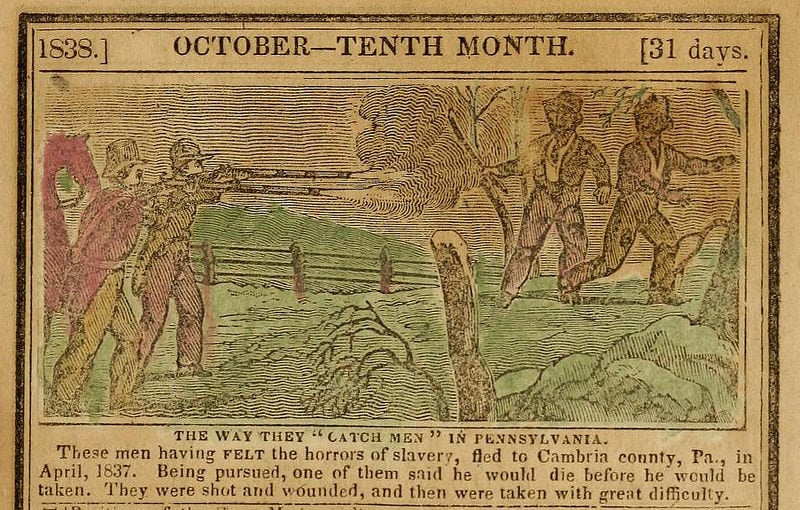 Each year, the AASS featured statistics in its almanacs to convey the movement’s growth, as well as to reveal politicians’ voting records on the matter of slavery.The Public Domain Review 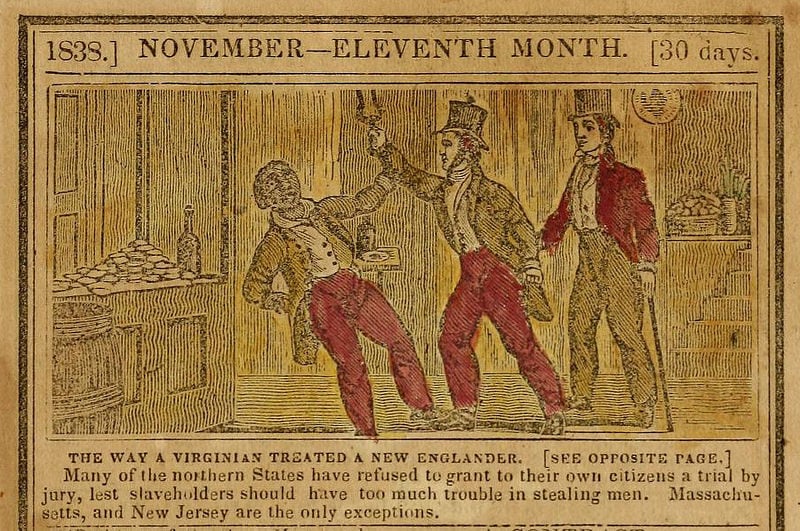 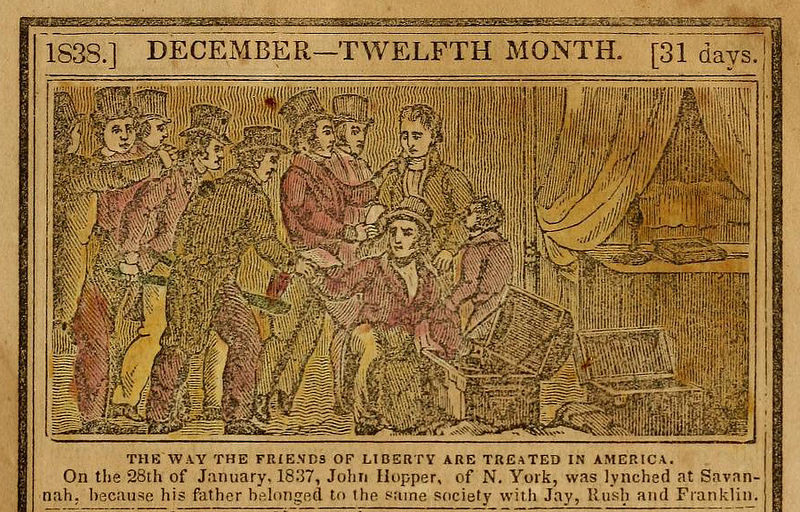 She adds, “Just as the state solidified its power in this period through what Oz Frankel describes as “print statism”—the unprecedented production, accumulation, and diffusion of social facts in and through official reports—so too did antislavery rely on the printed discourse of numeracy to establish their knowledge system as credible and their movement as legitimate.”The Public Domain Review 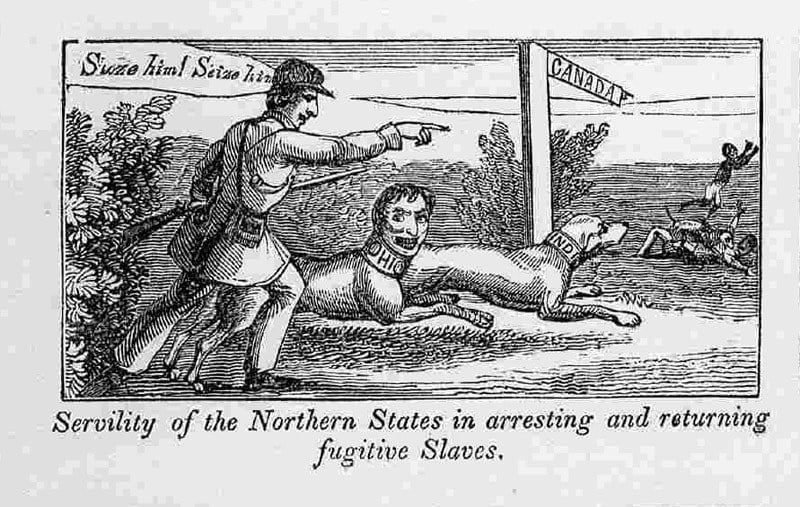 The years between 1832 and 1837 saw a sharp increase in the circulation of anti-slavery propaganda, thanks in no small part to Garrison’s strategic use of media, numeracy, and vivid imagery. www.awesomestories.com 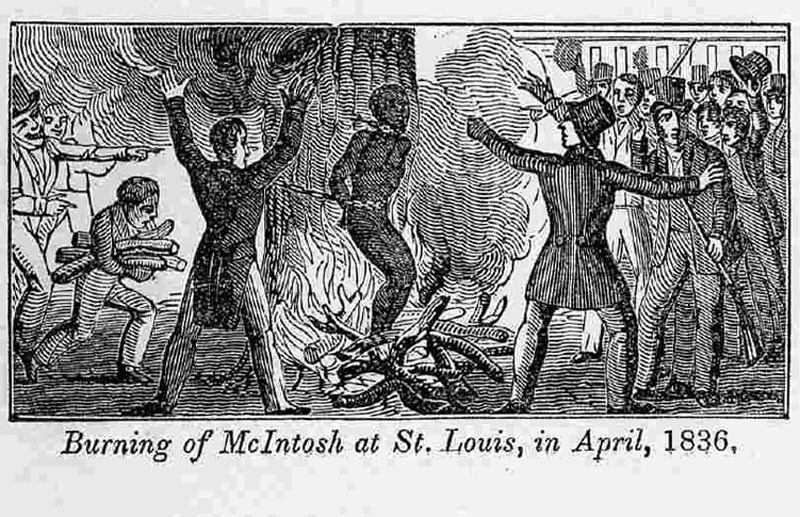 As noted activist/abolitionist Angelina Grimke said in 1838, “Until the pictures of the slave's sufferings were drawn and held up to the public gaze, no Northerner had any idea of the cruelty of the system, it never entered their minds that such abominations could exist in Christian, Republican America."www.awesomestories.com 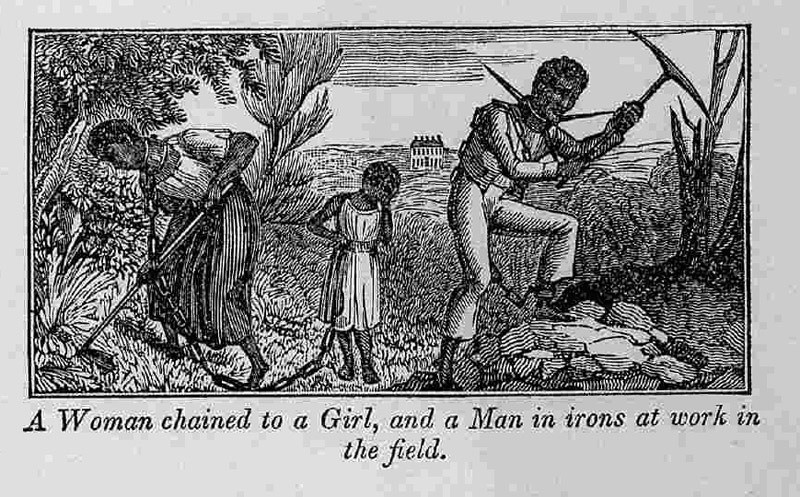 That’s not to say the almanacs — carved from woodblocks — were not met without resistance. Southern states were adamant in their attempts to block the distribution of these materials.www.awesomestories.com 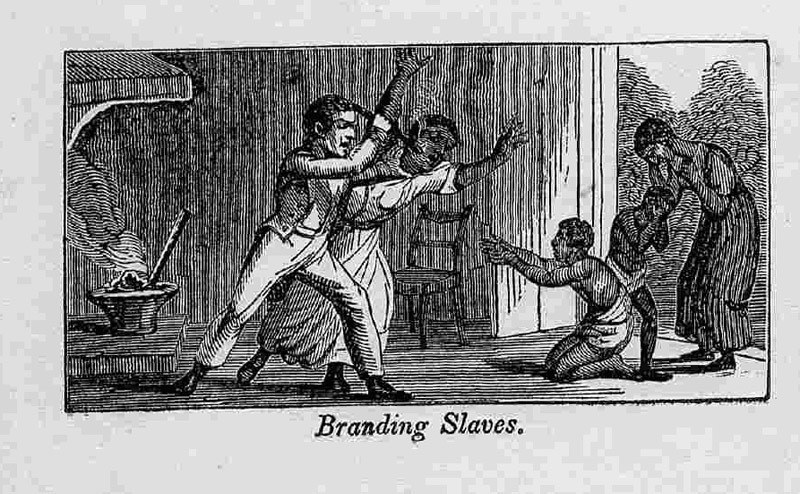 They were, however, widely read in the North, where they originated.Awesome Stories 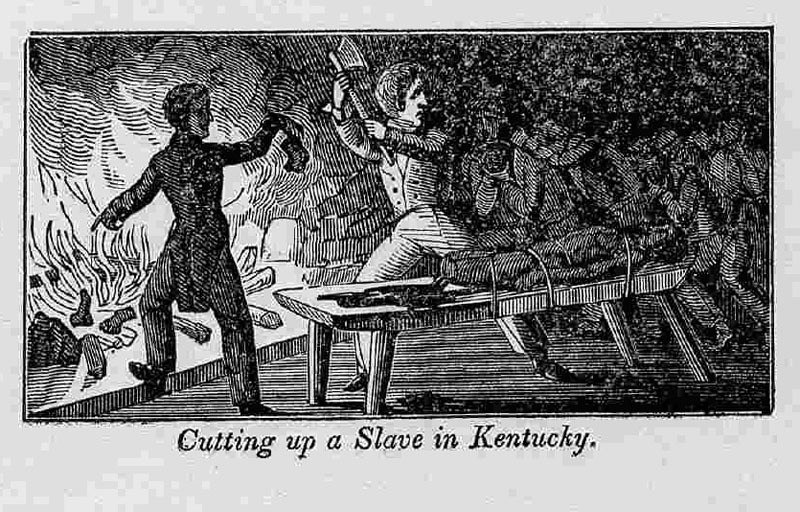 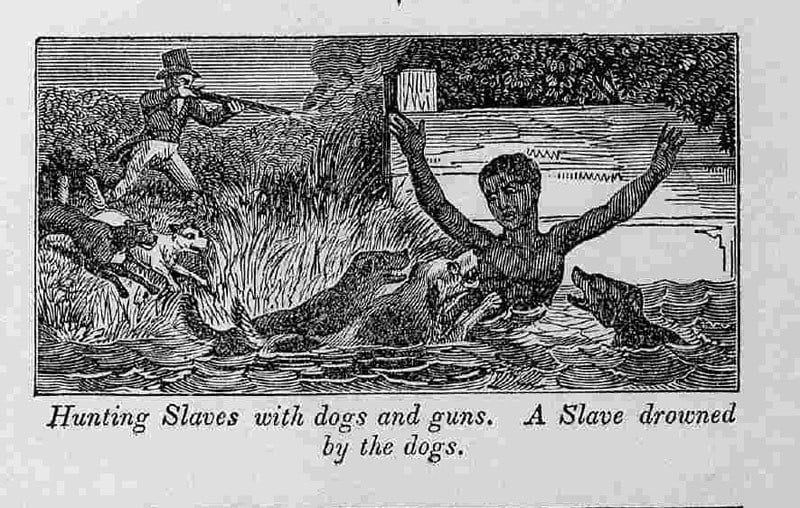 These petitions became so overwhelming that in 1836 the U.S. House of Representatives implemented the “gag rule,” which blocked debate on the subject.Awesome Stories 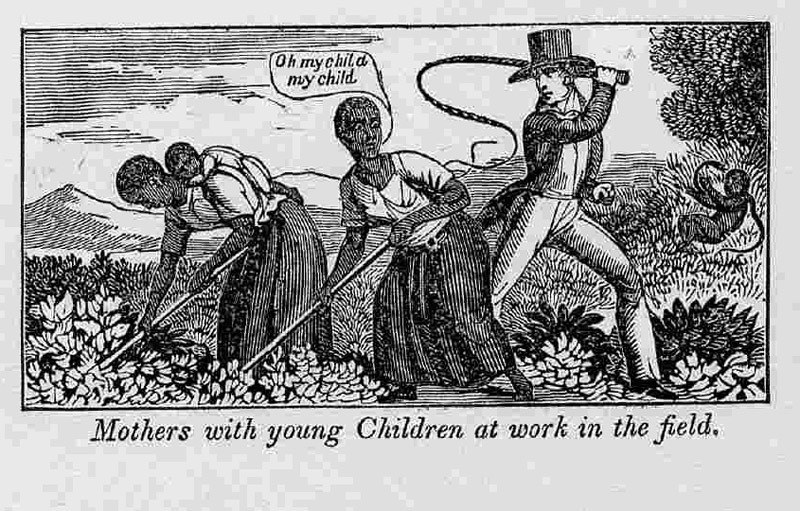 Abolitionists were unfazed by the ruling, and continued to agitate for the end of slavery, gaining momentum through the continued dissemination of their almanacs. Awesome Stories 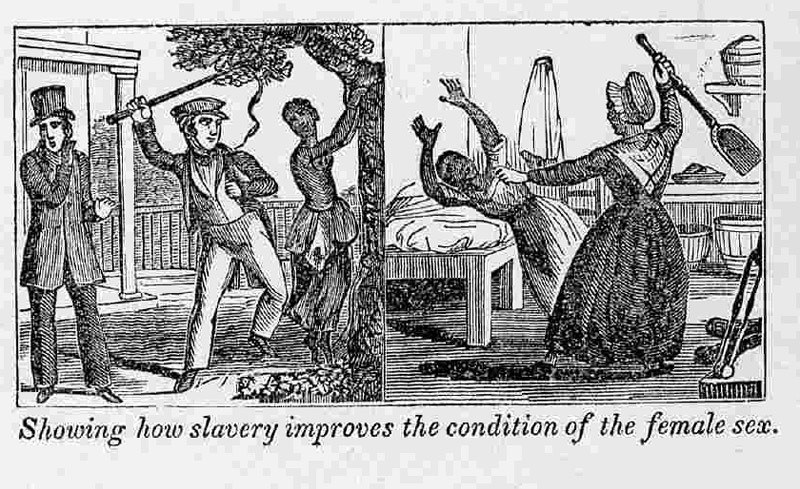 The gag ruling was eventually repealed in 1844. Awesome Stories 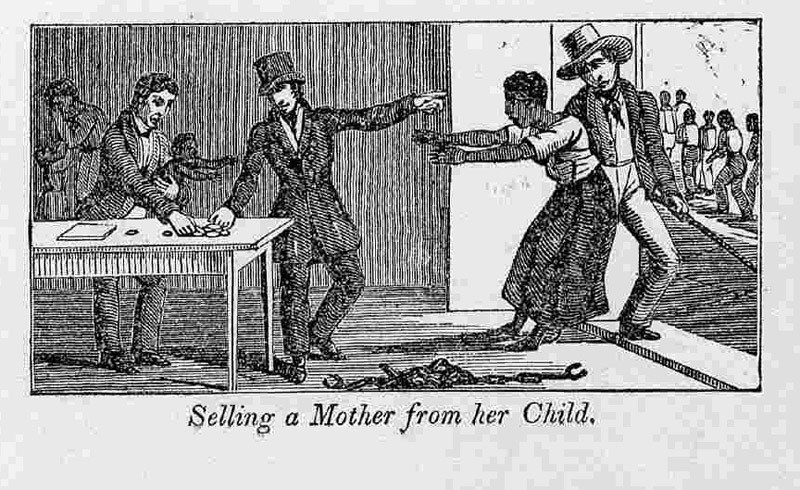 Initially, abolitionists hoped that one of the major political parties of the time (the Democrats or the Whigs) would support their cause with the immediacy they demanded. Awesome Stories 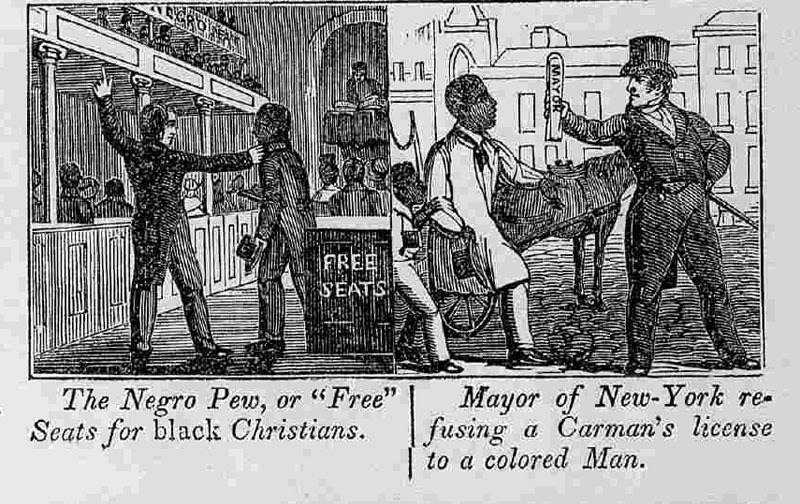 That didn’t happen, and so in 1848, abolitionists established the Free Soil party. Awesome Stories 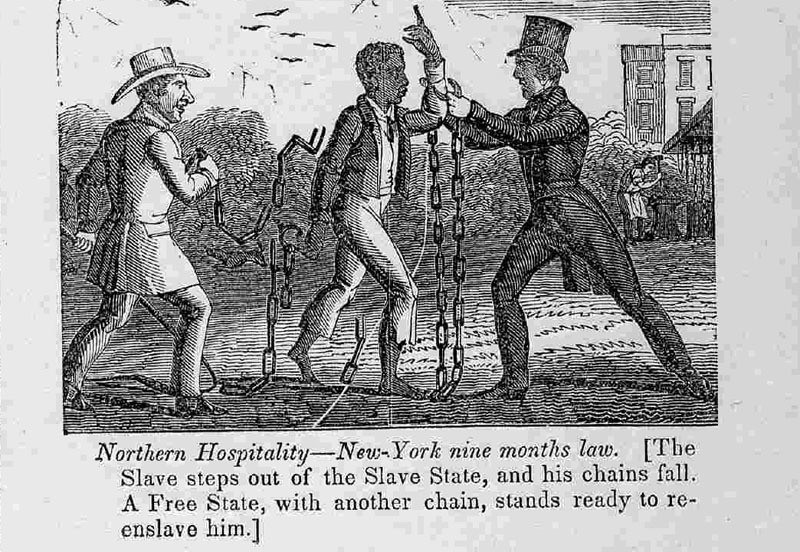 The party’s platform was "Free Soil, Free Speech, Free Labor and Free Men, and under it we will fight on and fight ever, until a triumphant victory shall reward our exertions."Awesome Stories 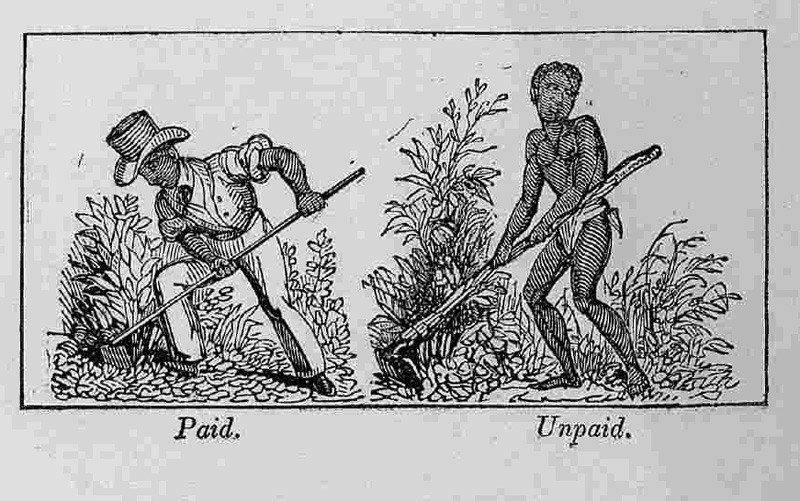 While short-lived, the party exerted major influence in Congress, where it sent 16 elected officials. It also had two presidential candidates, Martin Van Buren in 1848 and John P. Hale in 1852, both of whom lost.Awesome Stories 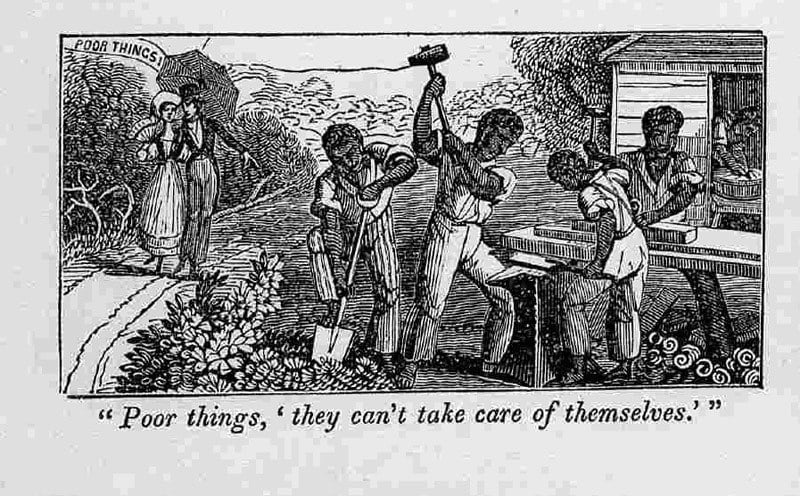 The party's most important legacy lies not in votes or numbers, but the political possibilities it provided, allowing anti-slavery Democrats a way to convene with likeminded individuals of other parties.Awesome Stories 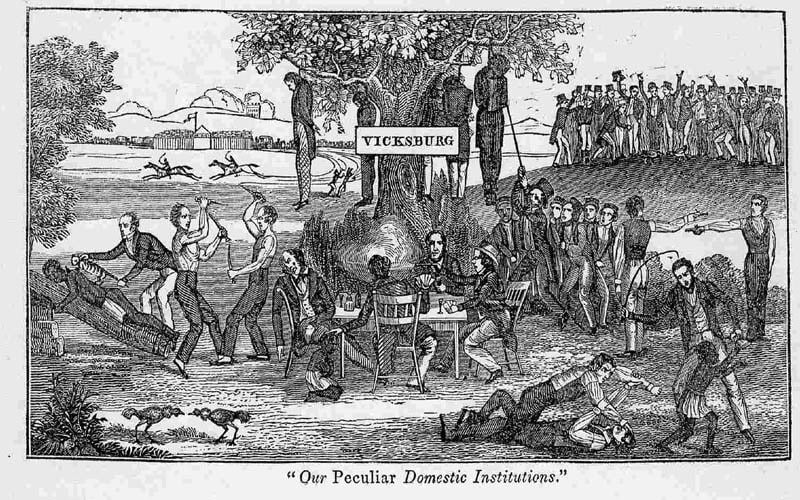 This political faction would eventually become the Republican Party, whose most well remembered elected official, Abraham Lincoln, would later enact the Emancipation Proclamation on January 1, 1863 and change the status of 3 million people from "slave" to "free." Awesome Stories