On April 13, 1970, an oxygen tank exploded aboard Apollo 13, forcing American astronauts Jim Lovell, Jack Swigert, and Fred Haise to act quickly in order to save the spacecraft as well as their own lives. The explosion forced the crew to abandon their mission — to reach the moon — but the crew’s heroics saved the craft and saved NASA from another tragedy just three years after the Apollo 1 disaster.

Forty-six years later, we look beyond those two accidents and survey, via photographs from the missions, some of the most important achievements in the history of the Apollo program: 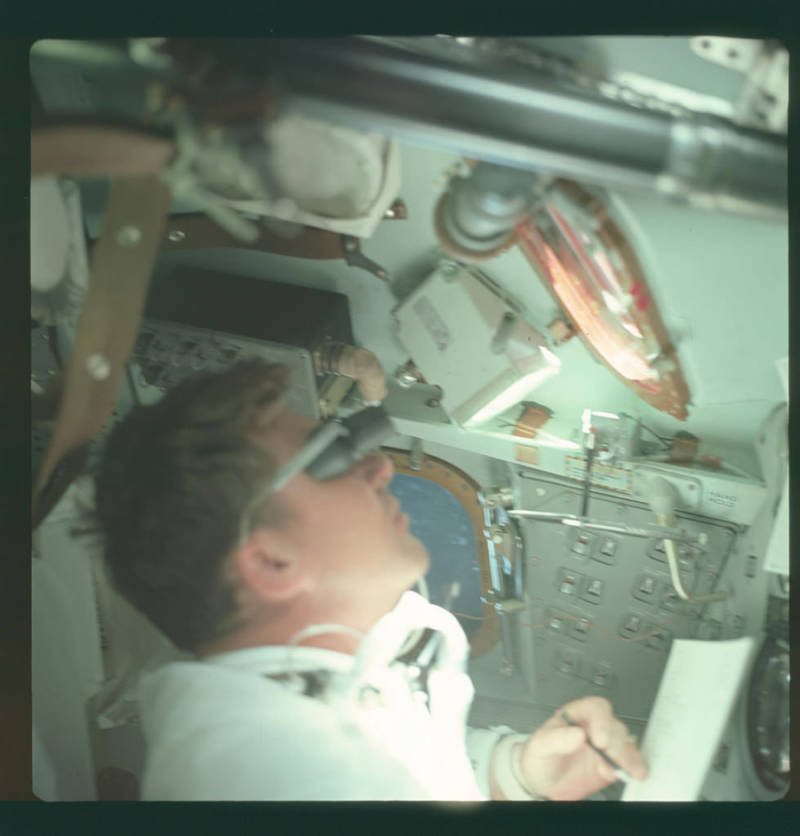 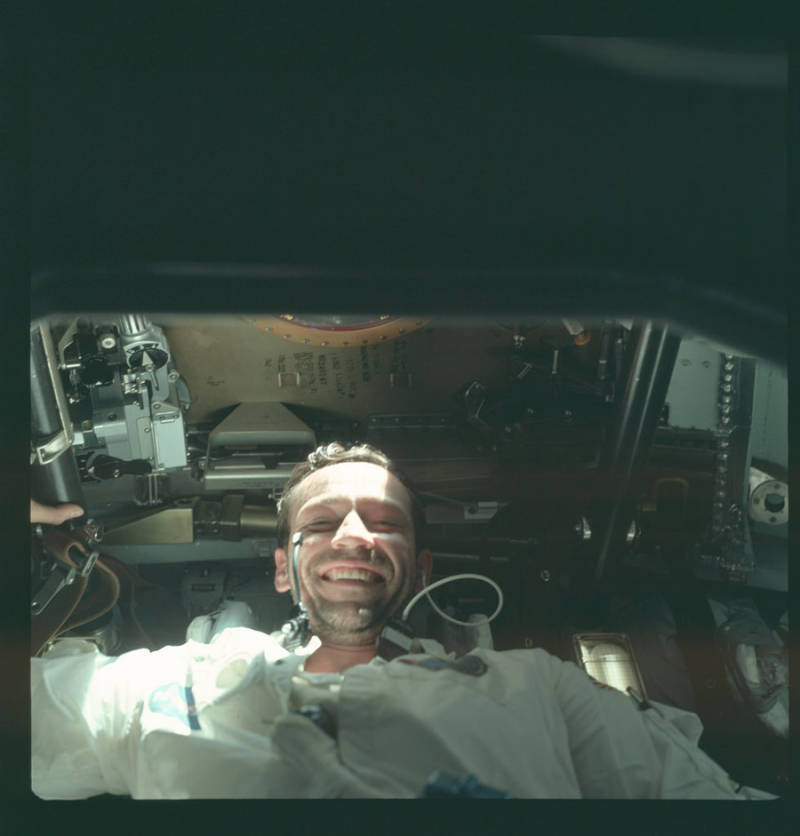 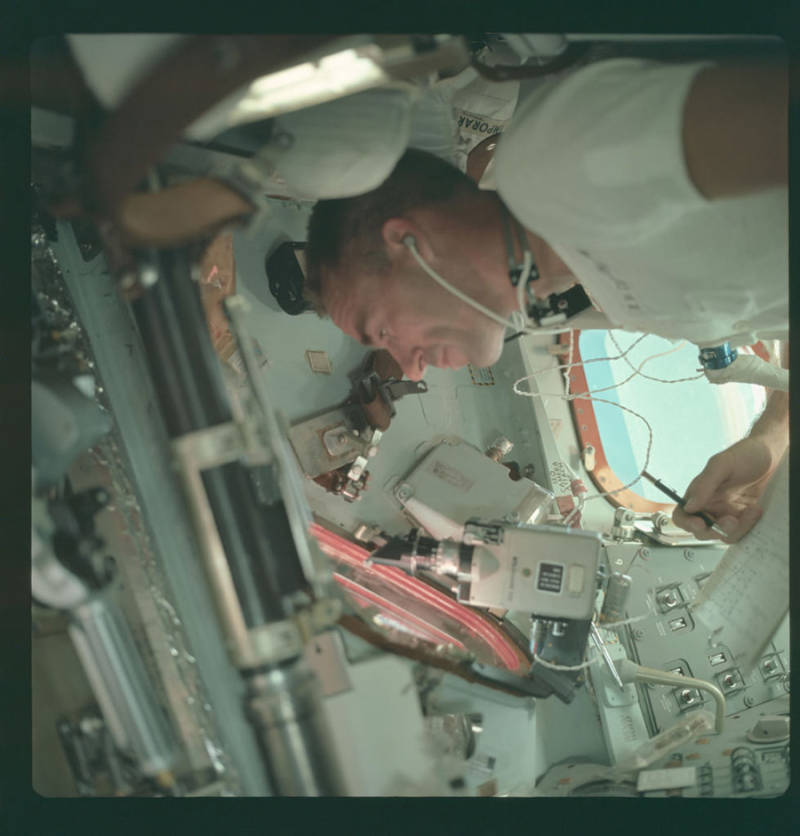 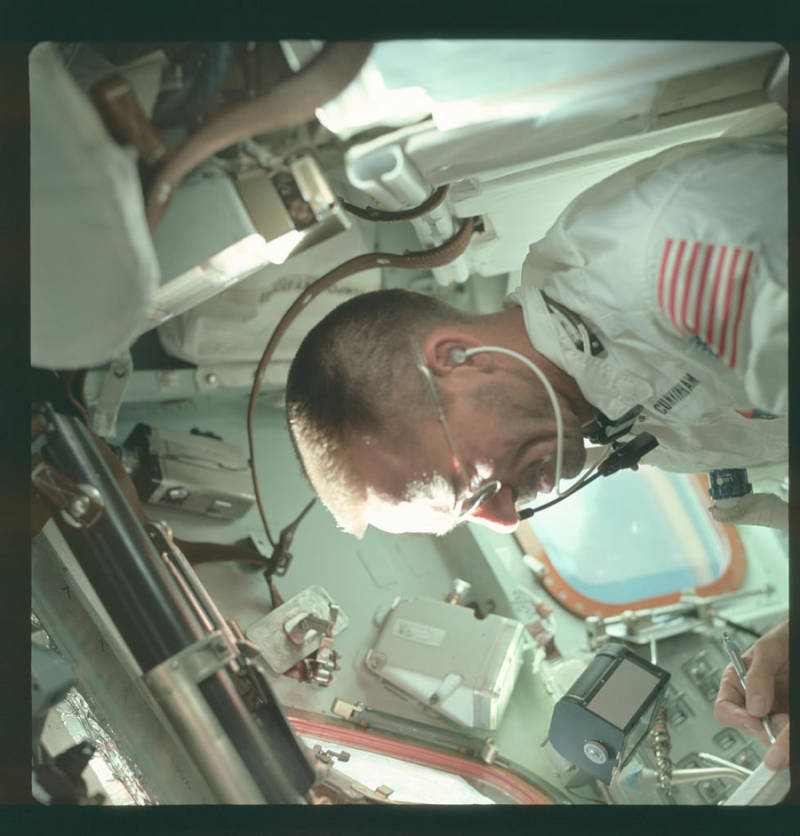 Cunningham writes with a space pen aboard Apollo 7. The Apollo 7 crew also transmitted the first live television broadcast from a U.S. spacecraft. 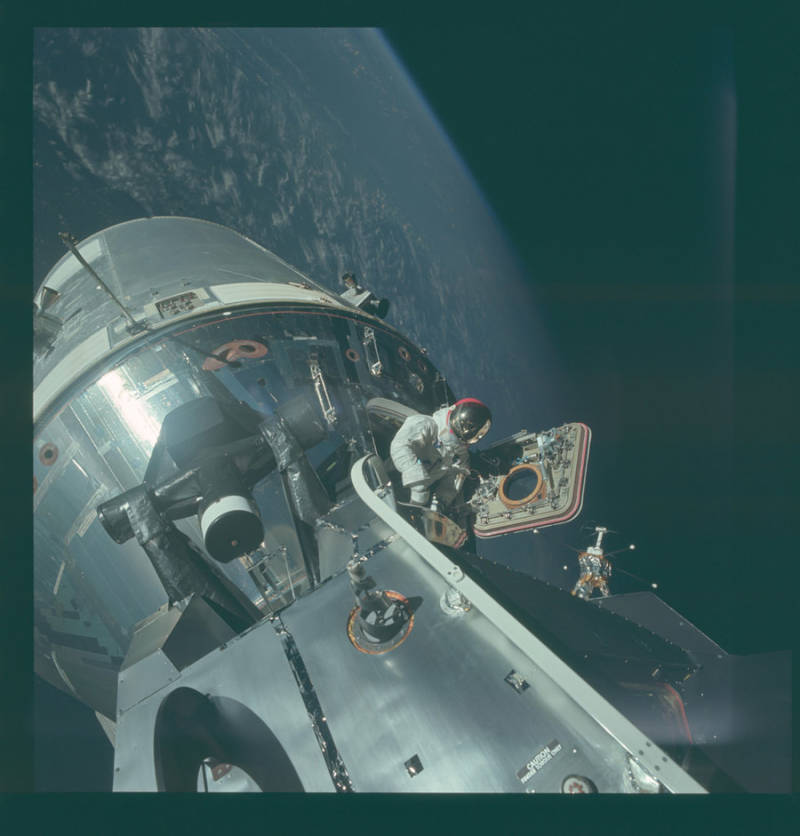 An astronaut peeks out of the Apollo 9 Module with the curvature of the Earth shown clearly in the background. 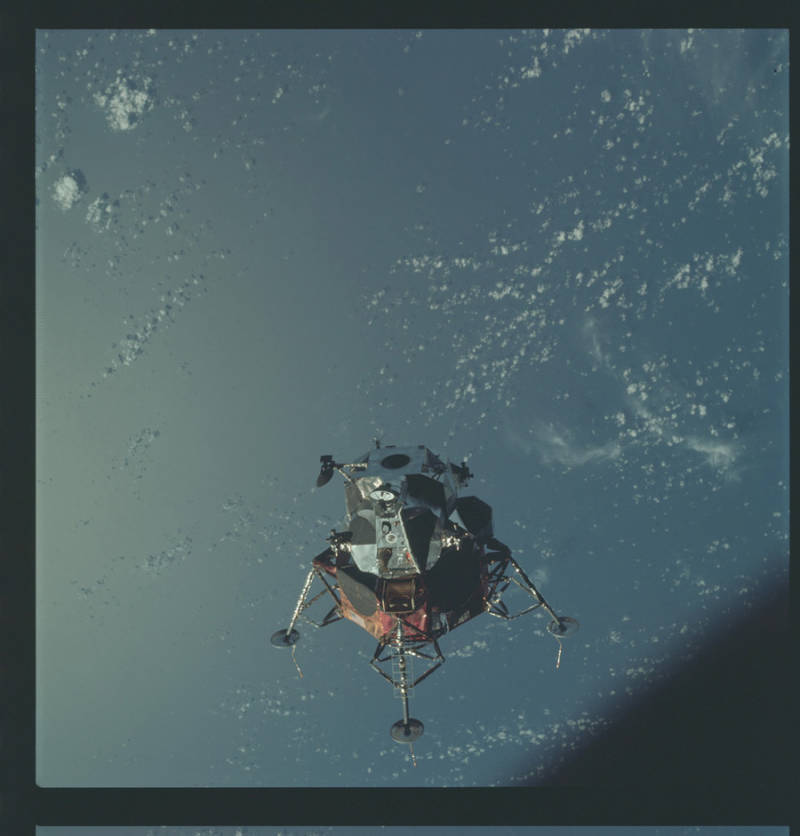 Apollo 9 was the first mission to include the Lunar Module. 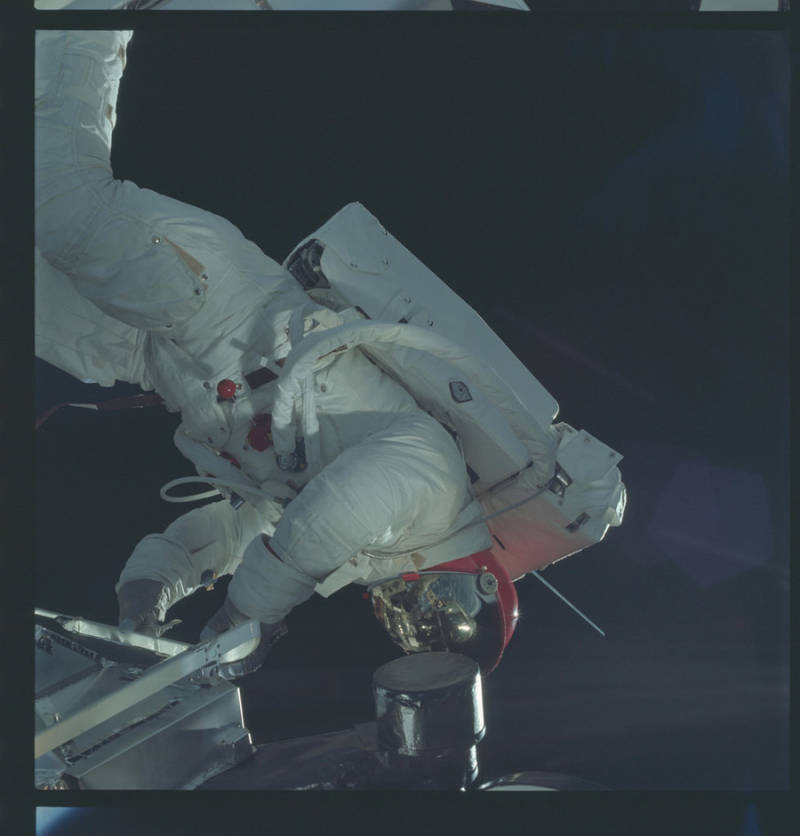 The Apollo 9 crew of Commander James McDivitt, Command Module Pilot David Scott, and Lunar Module Pilot Rusty Schweickart spent 10 days in orbit performing many tests that would be critical to eventually landing on the moon. 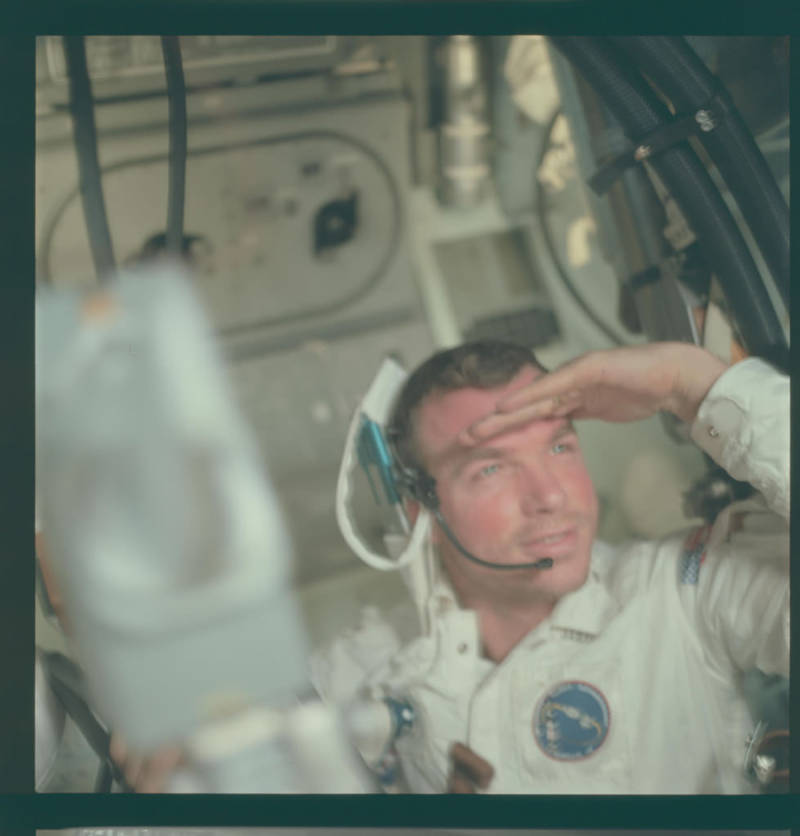 David Scott (above) would later be the Commander on Apollo 15. 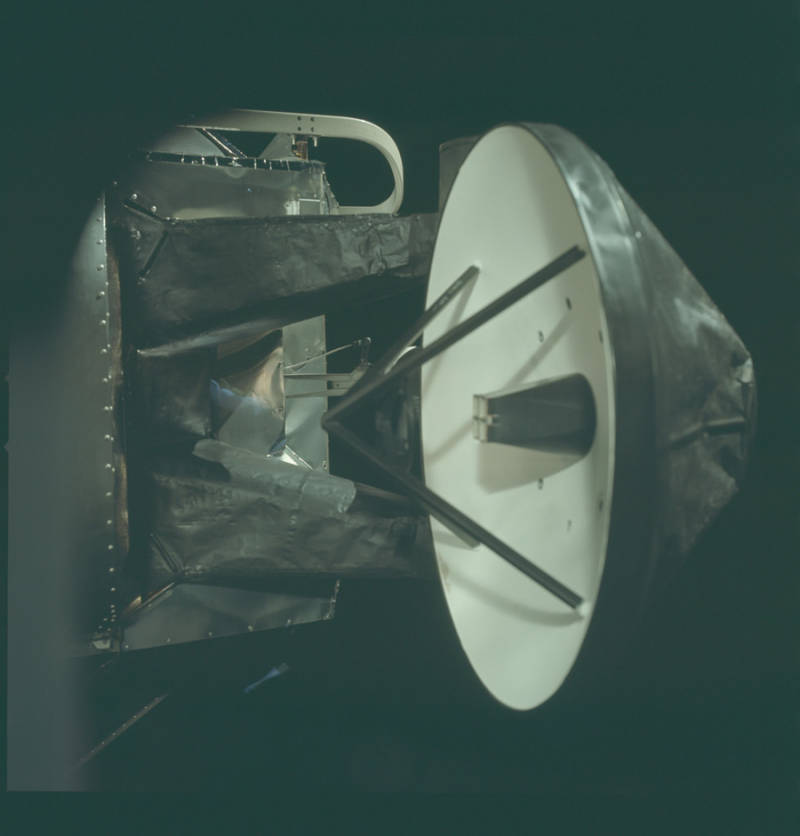 The Apollo 10 Lunar Module was able to navigate within 8.4 nautical miles of the lunar surface, the point at which powered decent to the moon’s surface would commence. 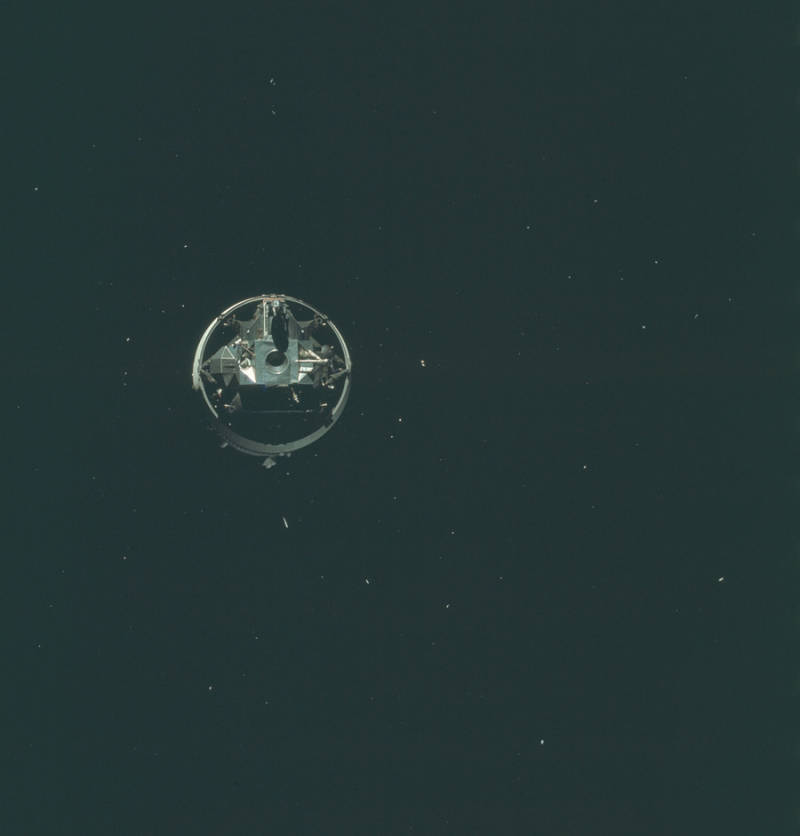 The success of this mission enabled the first lunar landing attempt with Apollo 11. 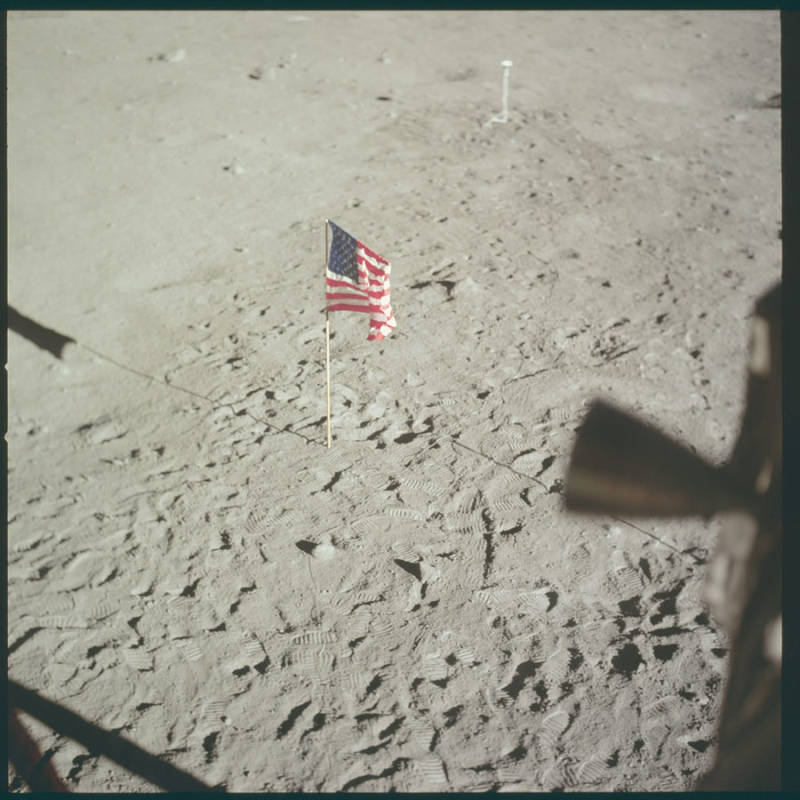 The Apollo 11 Lunar Module, with Neil Armstrong and Buzz Aldrin on board, landed on the surface of the moon on July 20th, 1969. 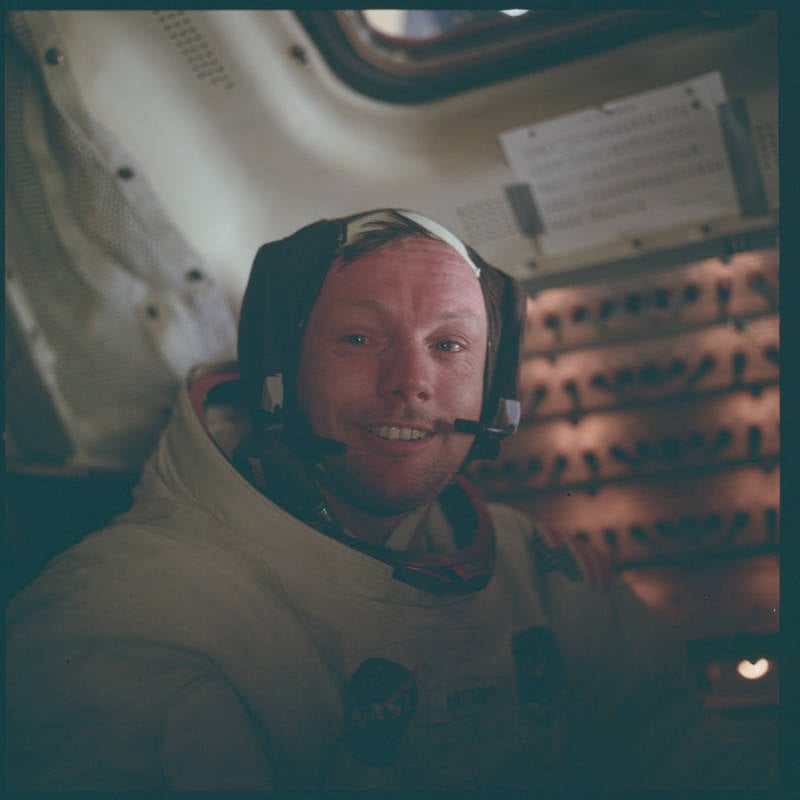 Shortly after it landed, Armstrong (above) became the first man to walk on the moon. 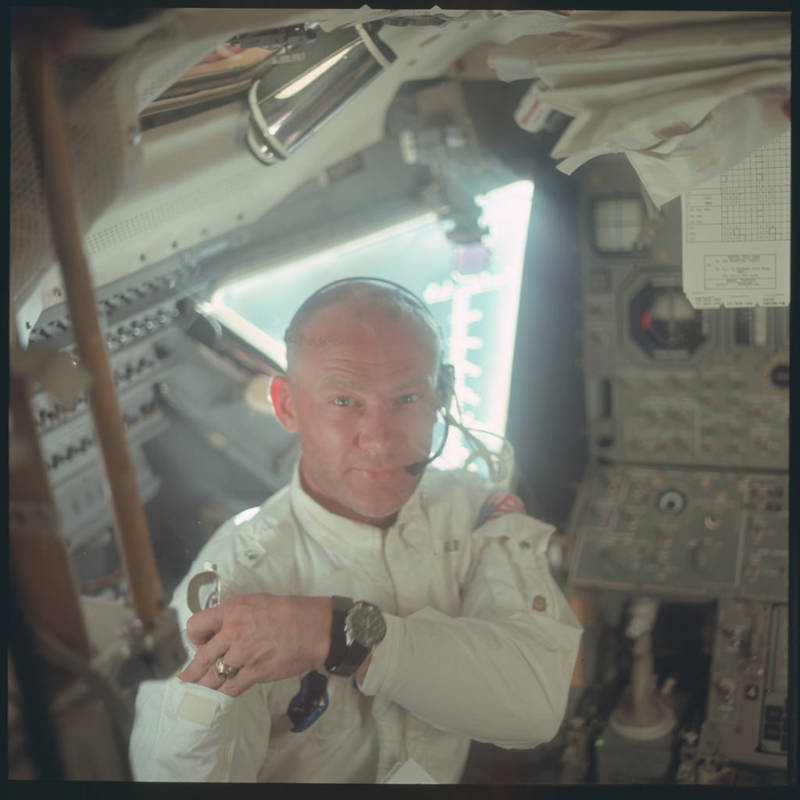 Aldrin (above) would soon follow Armstrong, becoming the second man to ever step on the lunar surface. 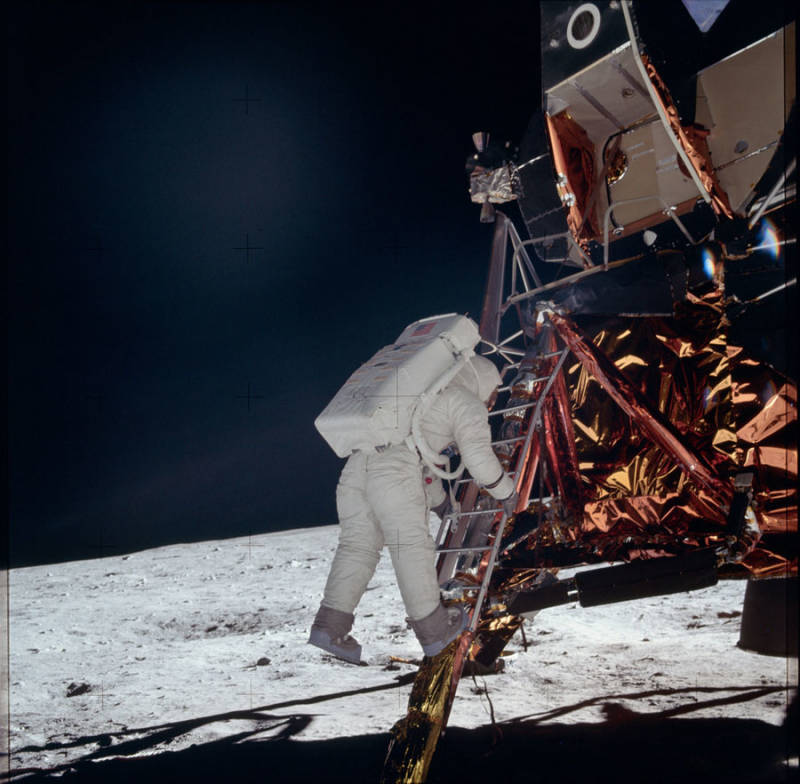 Neil Armstrong climbing out of the Lunar Module and onto the surface of the moon. 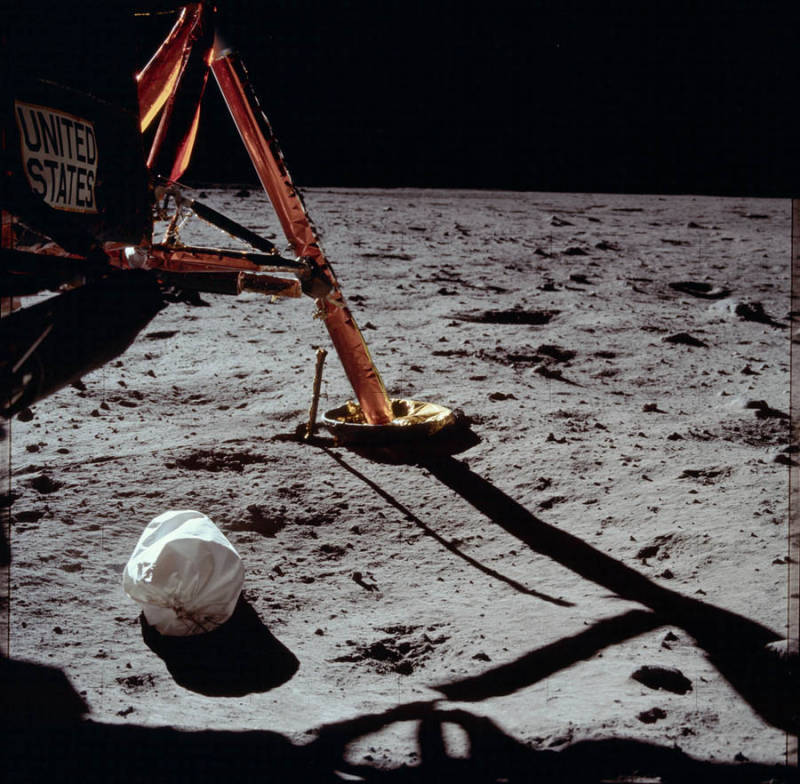 Above is the first EVA (Extravehicular Activity) photo ever taken — the first frame taken by Neil Armstrong from west of the ladder. 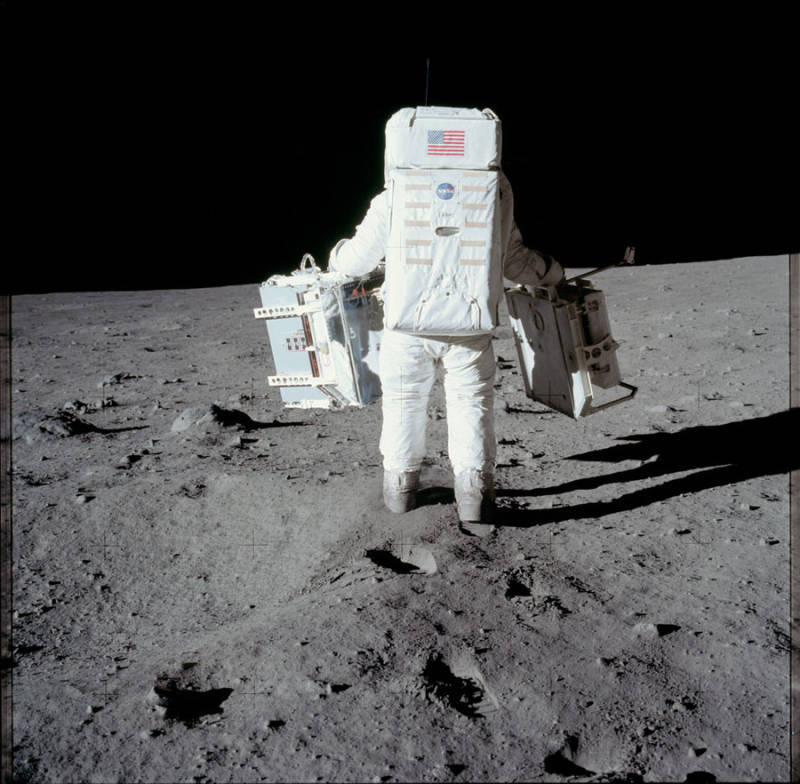 Aldrin preparing to deploy two components of the Early Apollo Scientific Experiments Package (EASEP) on the surface of the moon. 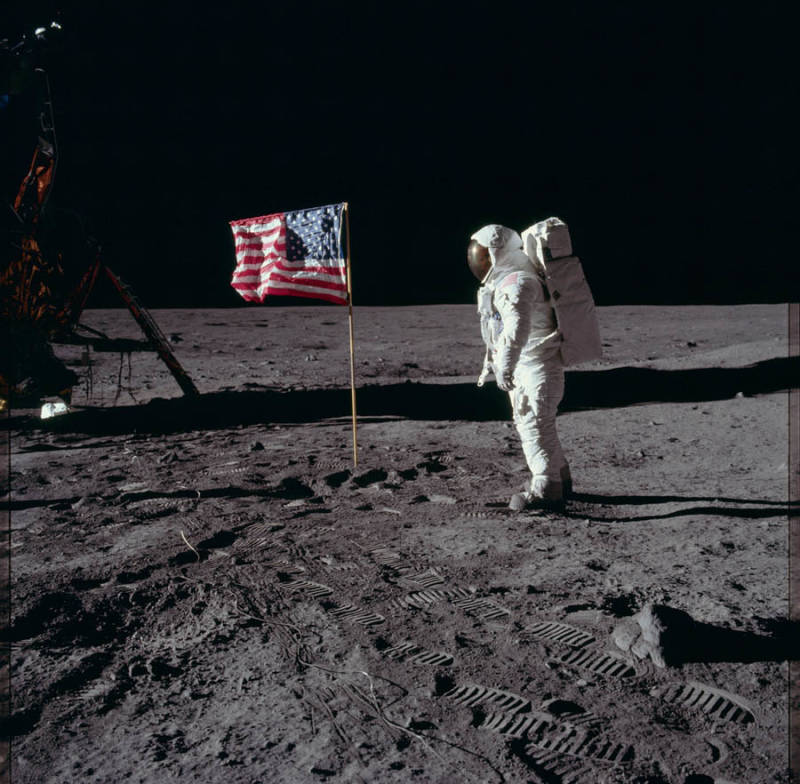 Aldrin stands saluting the American Flag upon the lunar surface. The astronaut's footprints are clearly visible in the frame. 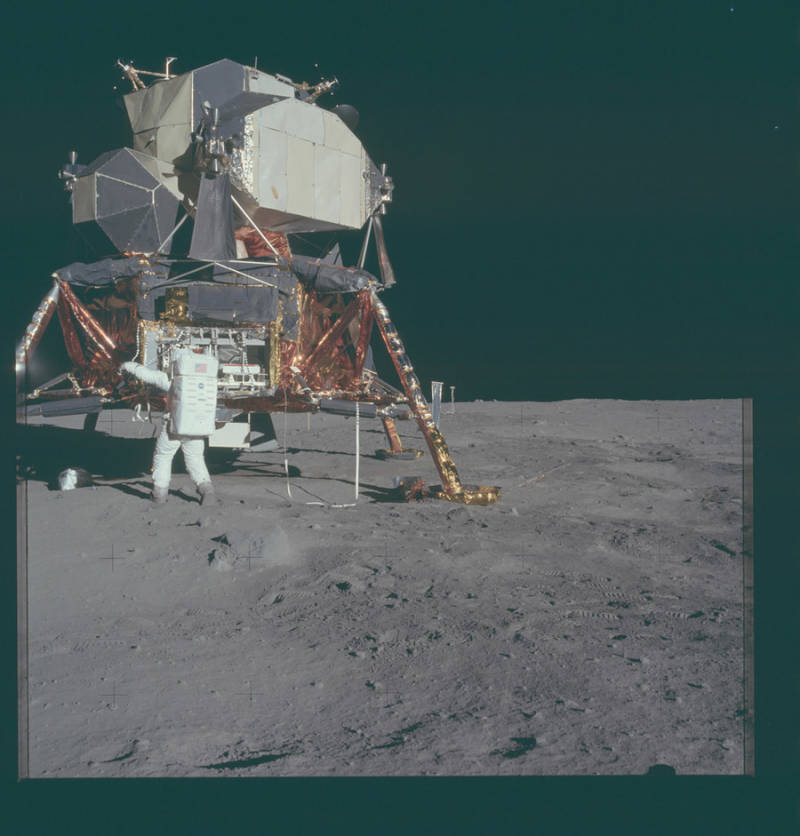 The theories were put to the test in and all were debunked. 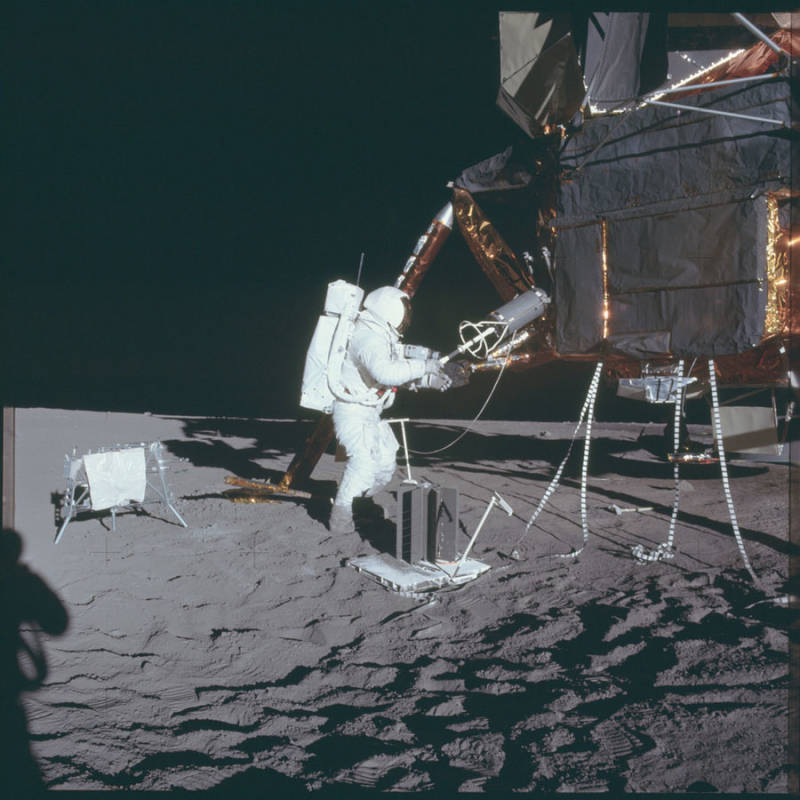 Apollo 12 was the sixth American manned space flight and the second to land on the lunar surface. 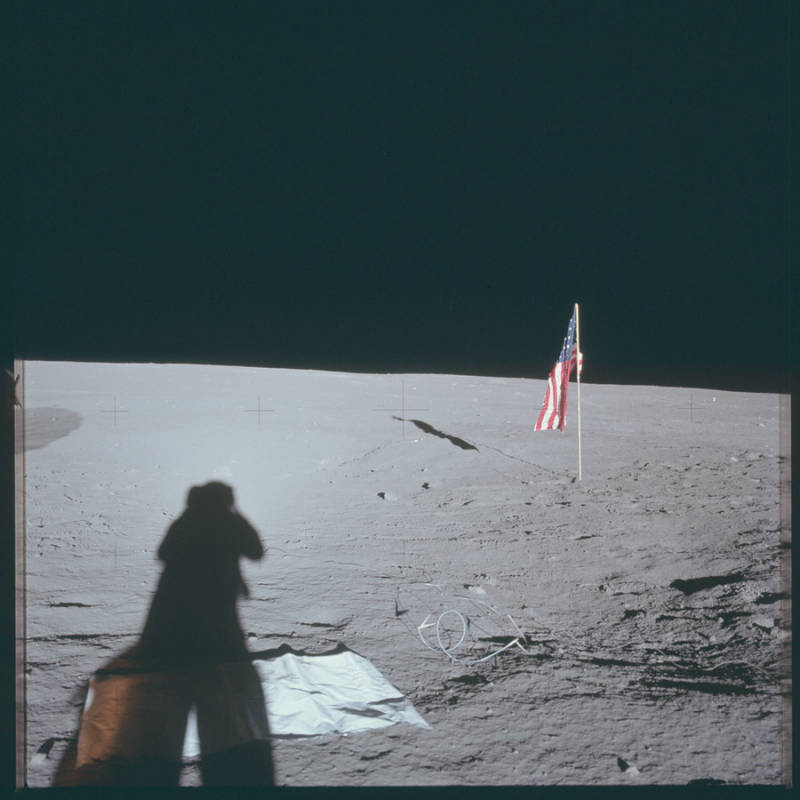 The Apollo 12 mission was the first to take a color television camera onto the moon's surface, but the camera was accidentally destroyed when Lunar Module Pilot Alan Bean pointed it towards the sun. 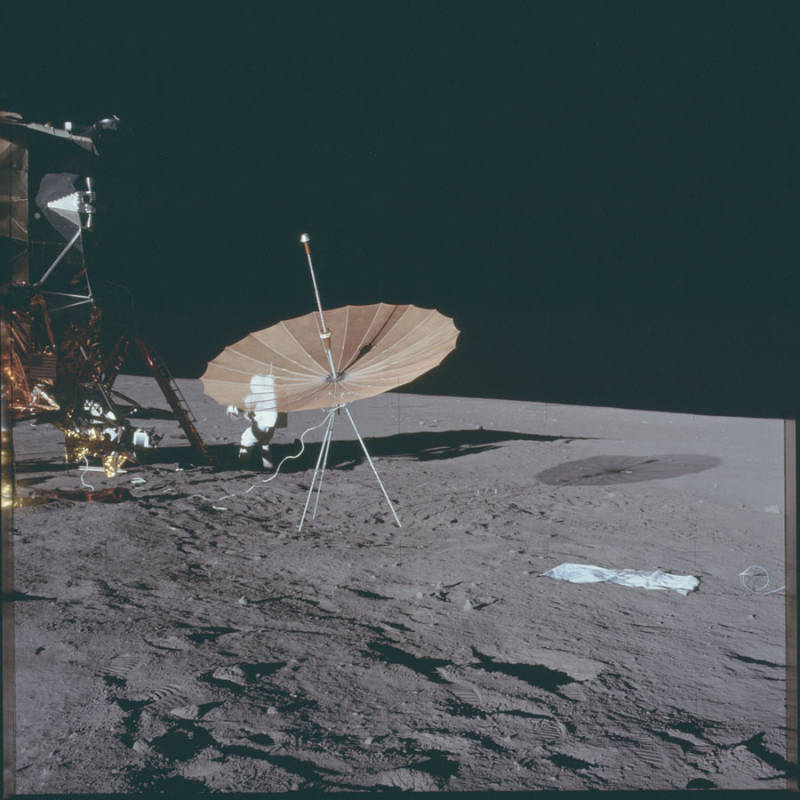 The Apollo 12 landing occurred near the Surveyor 3 unmanned space probe which landed in 1967. The crew retrieved some parts from the Surveyor craft to be returned to Earth to study the effects of long term exposure of the lunar environment. 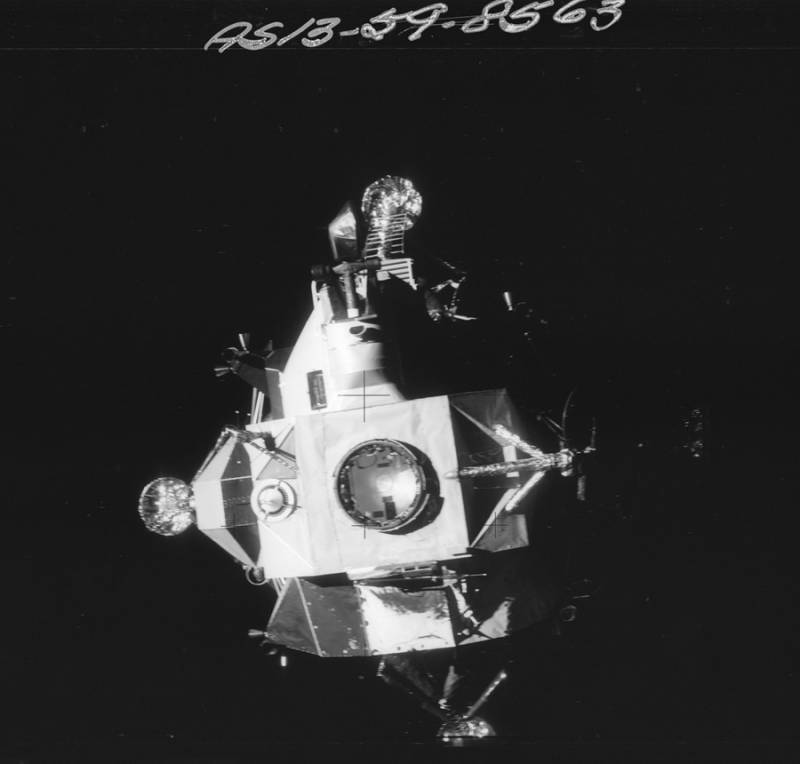 Apollo 13 launched on April 11, 1970 and was intended to be the third manned mission to land on the moon's surface. However, two days into the mission, an oxygen tank exploded onboard, crippling the Service Module, which was vital to the Command Module. 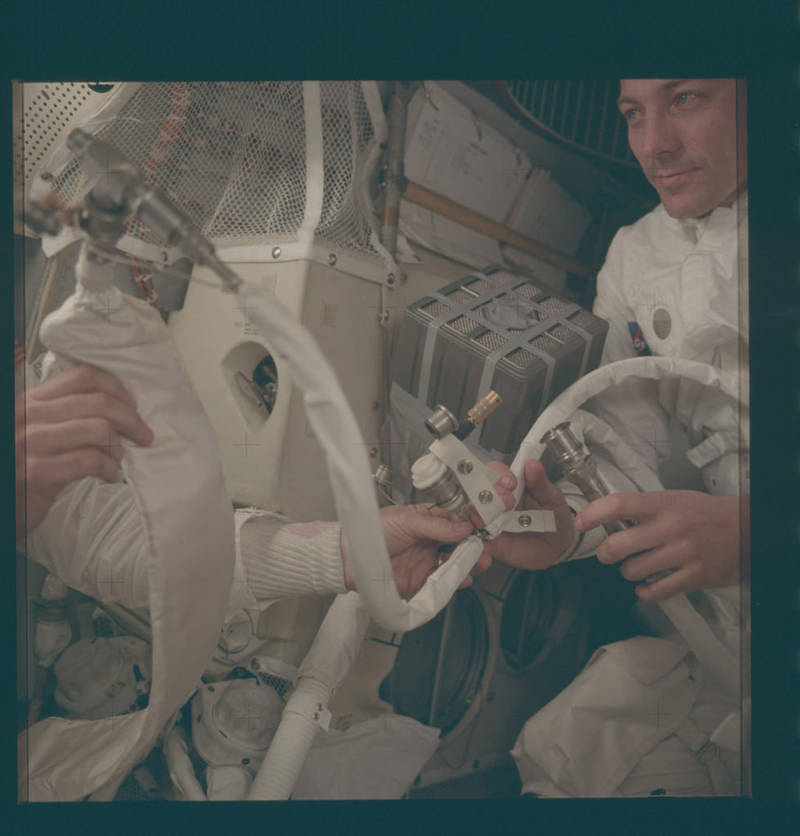 The crew had to improvise and repair an onboard air purifier in order to decrease the carbon dioxide levels and save the astronauts' lives. 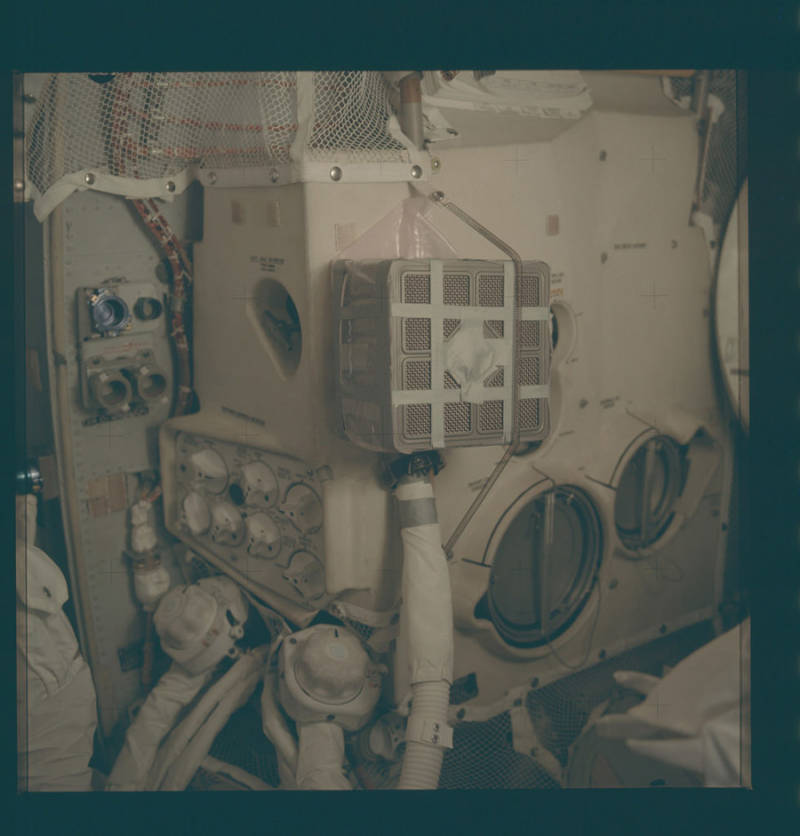 The purifier did not fit properly, so duct tape was used to solve the issue — it essentially allowed them to fit a square peg into a round hole. 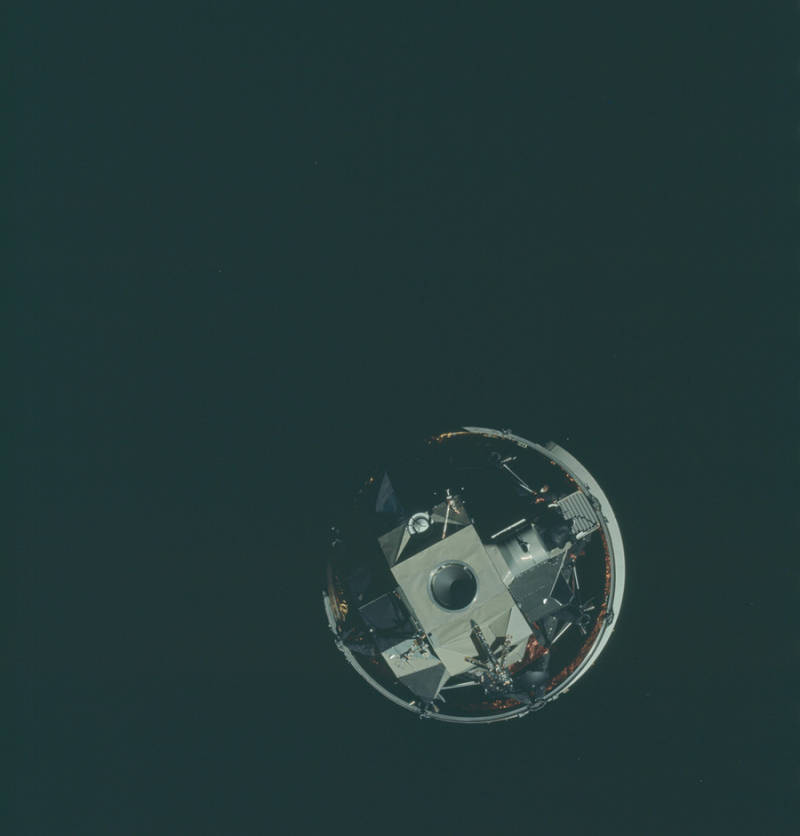 Despite low power and low oxygen, Apollo 13 made its successful return to Earth on April 17, 1970.

All Apollo photos taken from the Project Apollo Archive.

If you enjoyed these Apollo photos, be sure to check out these vintage NASA photos and read the story of the last man to walk on the moon.