Then And Now: The World’s First Cell Phone Looks A Lot Bulkier Than Today’s 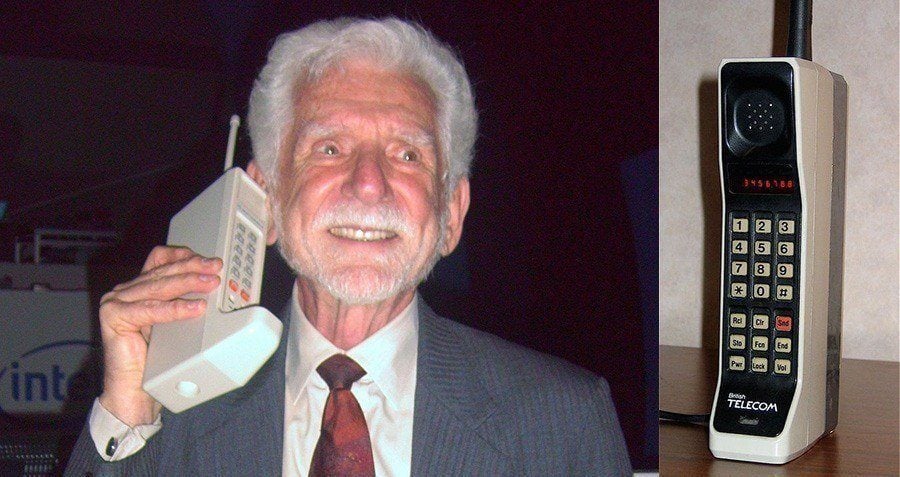 Right: The Motorola DynaTAC 8000X, the first cell phone ever made commercially available (1984 model). Left: Martin Cooper, the lead inventor of the DynaTAC and the father of the cell phone, in a 2007 reenactment of the very first cell phone call ever made on a DynaTAC prototype in 1973. Image Sources: Wikimedia Commons

On April 3, 1973, Motorola employee Martin Cooper made a very consequential phone call. Dialing up AT&T’s Joel Engel from midtown Manhattan, Cooper informed Engel that Motorola had beaten AT&T to the punch on a new project they’d both been trying to develop: The world’s very first cell phone. Cooper’s call came not from an office building, but, for the first time ever, from the street.

His prototype in hand, Cooper stood on the bustling sidewalk and spoke the first words ever uttered into a cell phone: “Joel, this is Marty. I’m calling you from a cell phone, a real, handheld, portable cell phone.”

With those words, the revolution had arrived.

As is the case with all momentous inventions, the revolution had actually been underway for decades. All the way back in 1947, AT&T’s Bell Labs had turned out the first research on cellular communications networks. After that, the race was on.

That phone, the DynaTAC 8000X, finally came to market in 1984. At that point, it weighed nearly two pounds (790 grams) and measured 10 inches in length — and that’s not even counting its thick rubber antenna — making it over six times heavier and two times longer than the iPhone 6.

Beyond that, the DynaTAC had a rudimentary red LED display for numbers, 60 minutes of battery life (followed by a ten-hour charge time), and retailed for $3,995 — which would equate to a little over $9,000 today.

The next great leaps in the cell phone’s story remain to be seen, but it just might be the much-rumored flexible cellphone screen.

Several companies are working on this feature, with the most recent major waves made by ReFlex, in February. The company says its device will be on the market in the next five years, but for now, we’ll have to make do with their — admittedly staggering — prototype demonstration video: