26 Photos Of NASA Landings Throughout The Decades 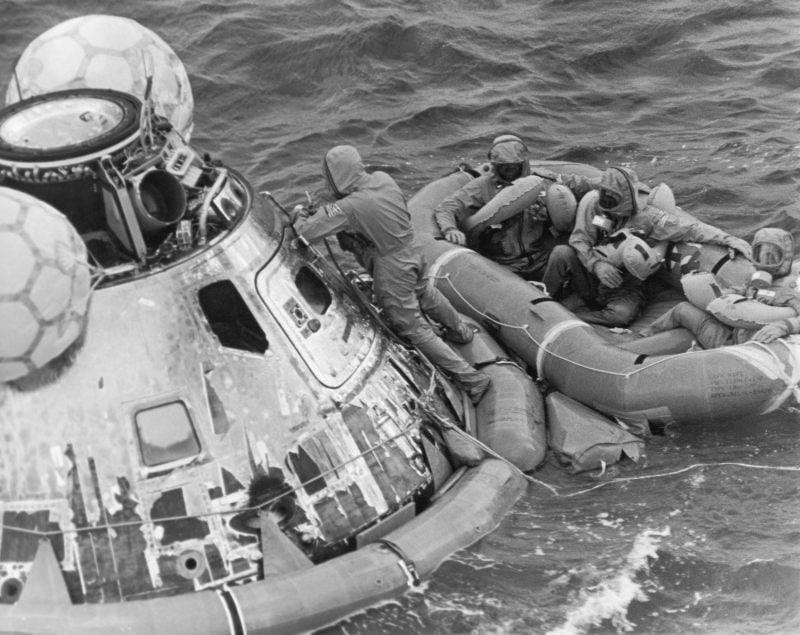 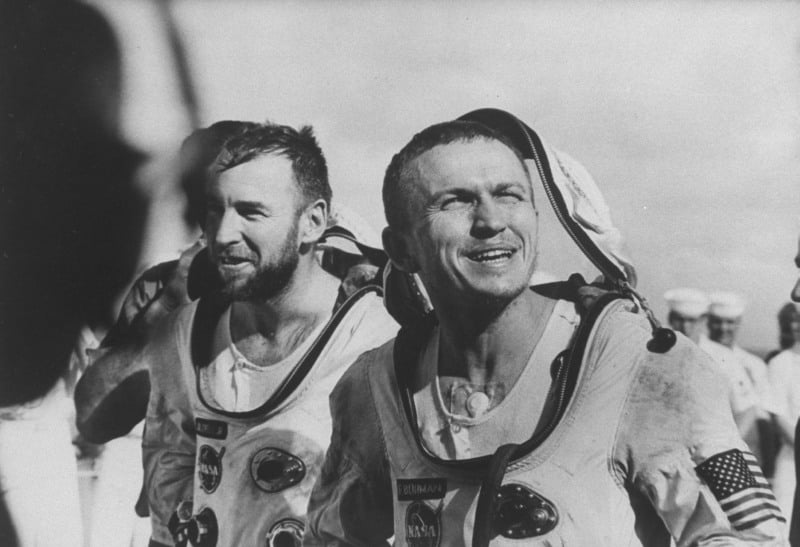 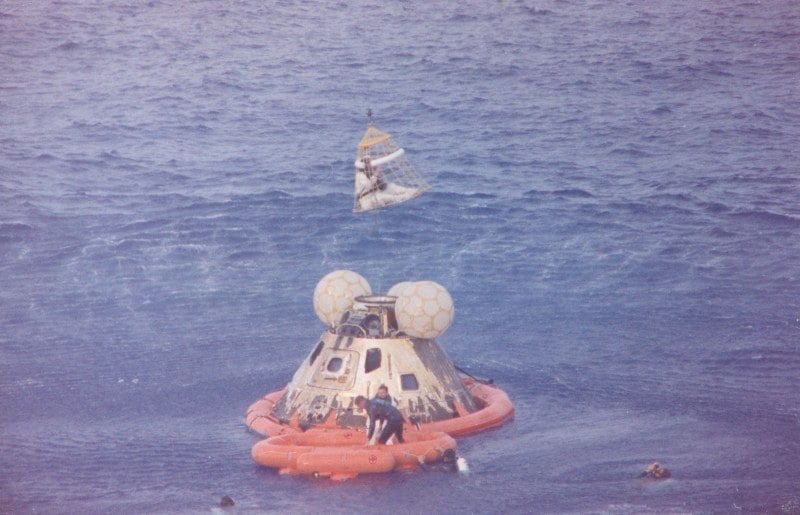 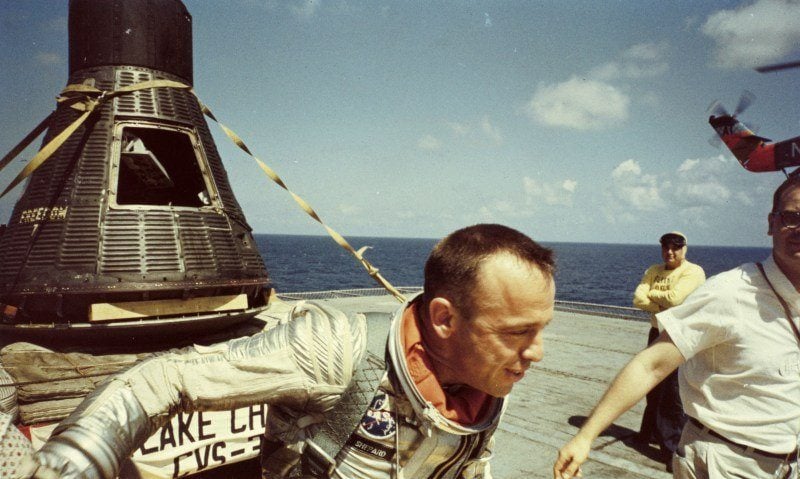 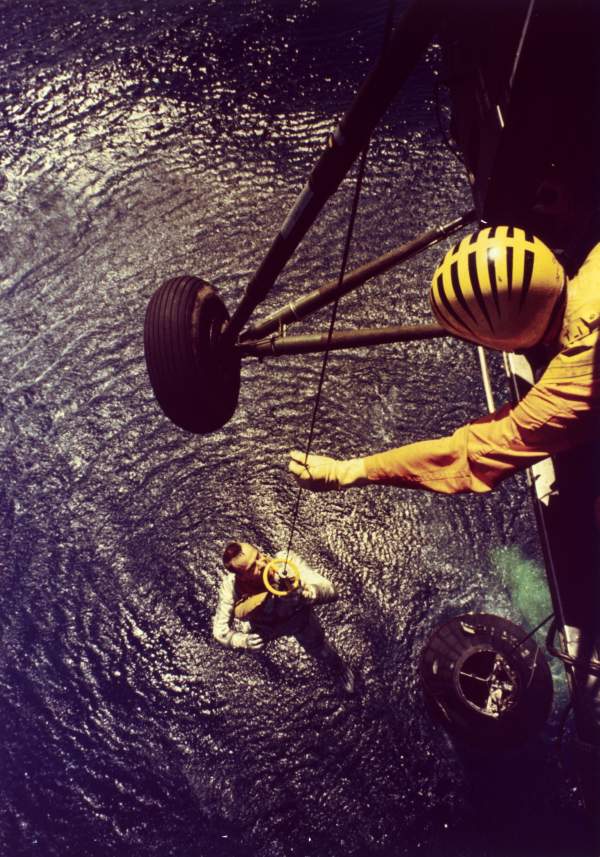 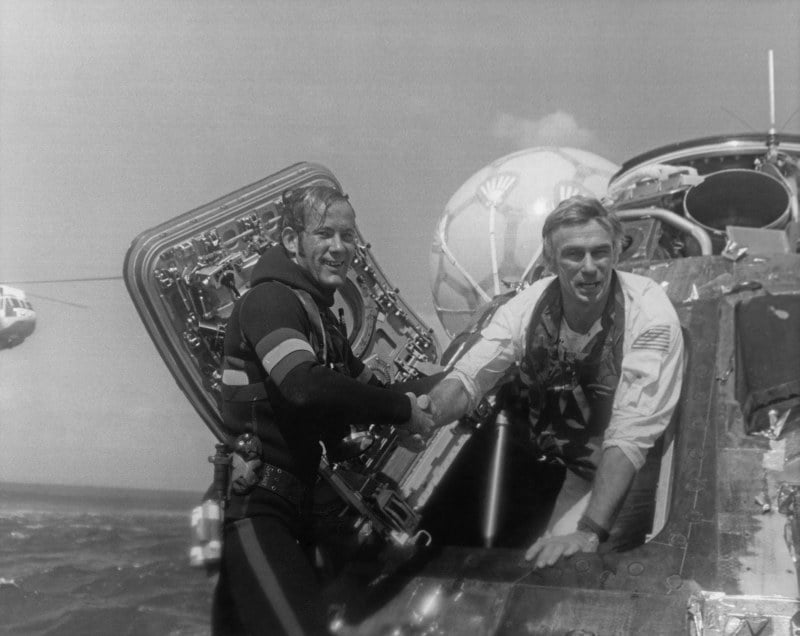 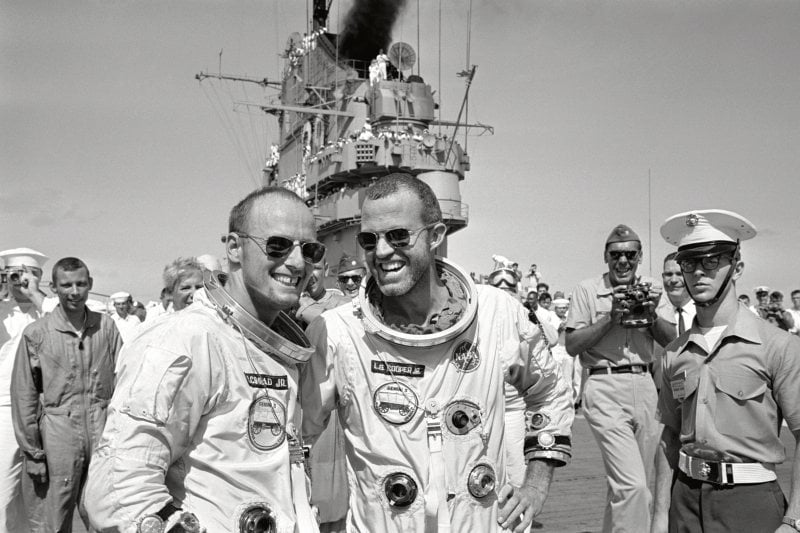 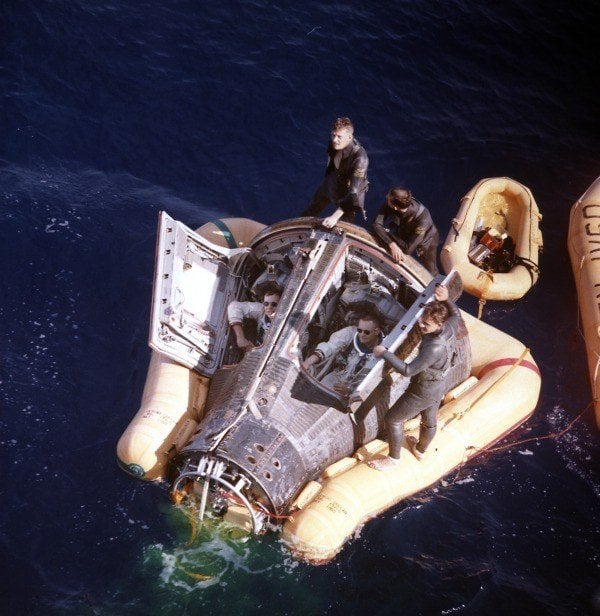 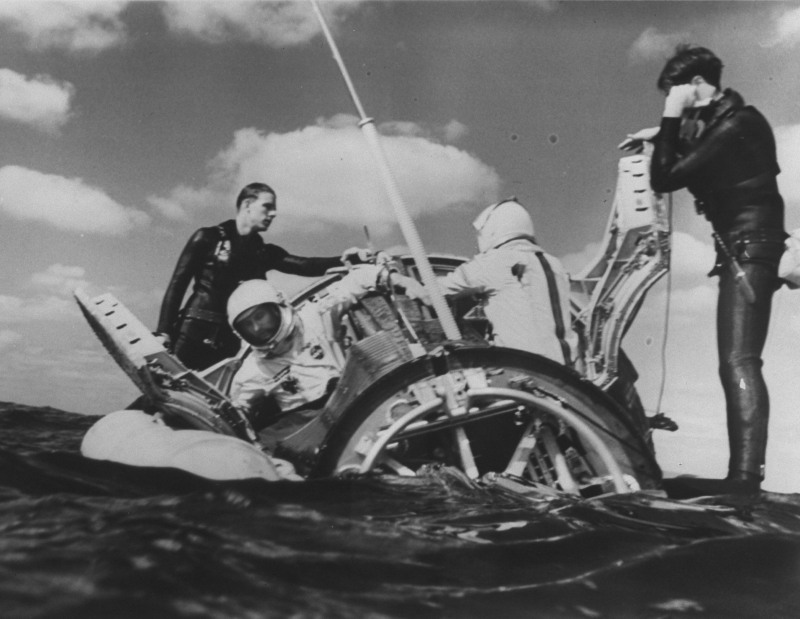 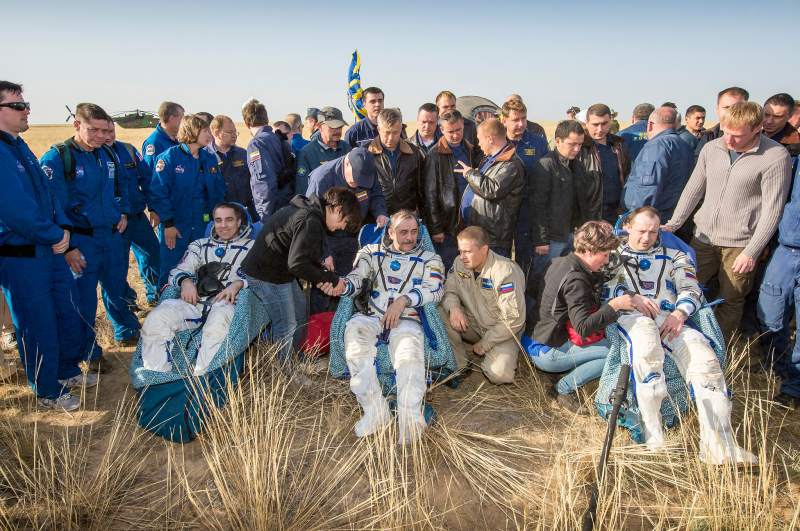 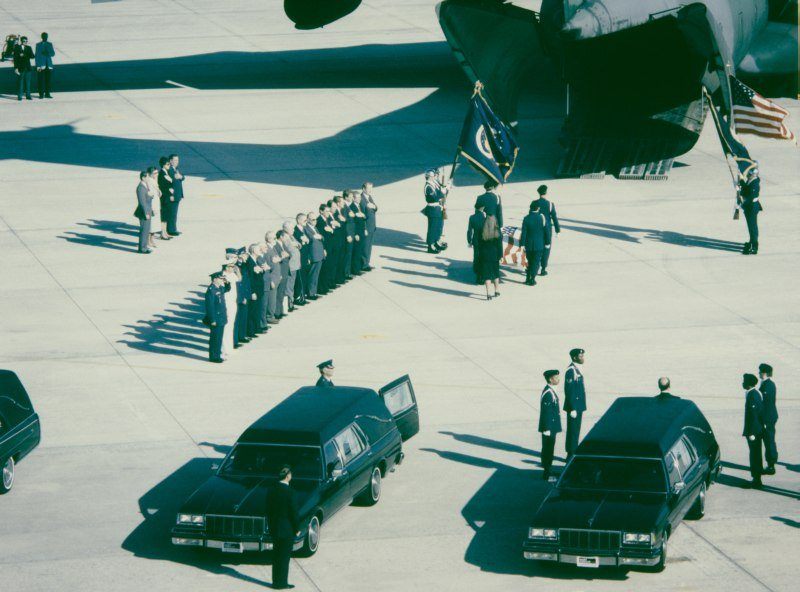 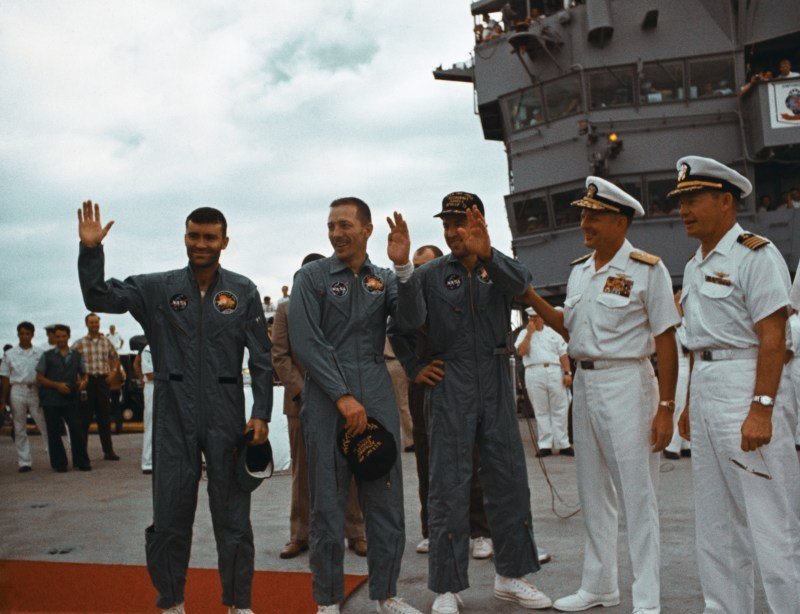 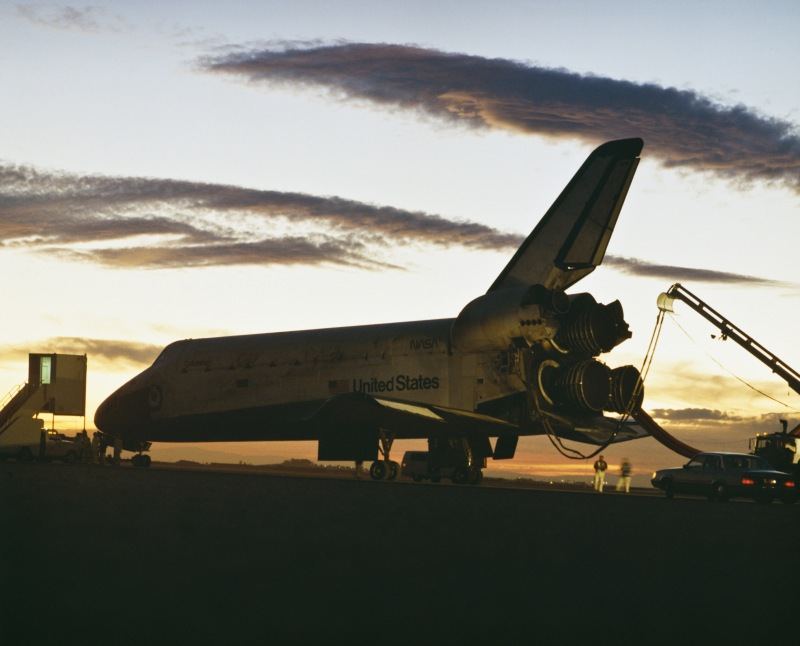 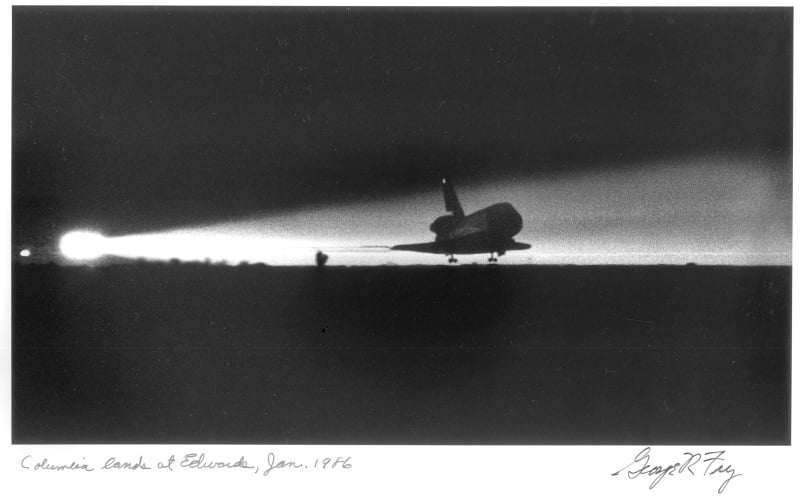 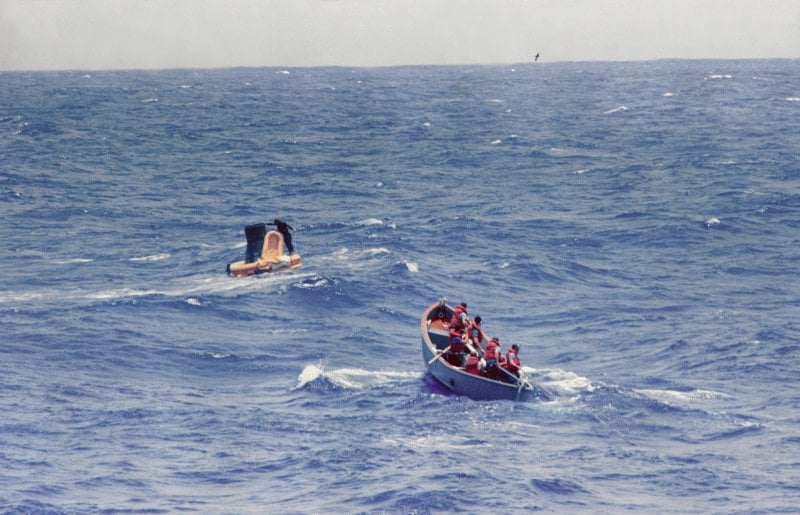 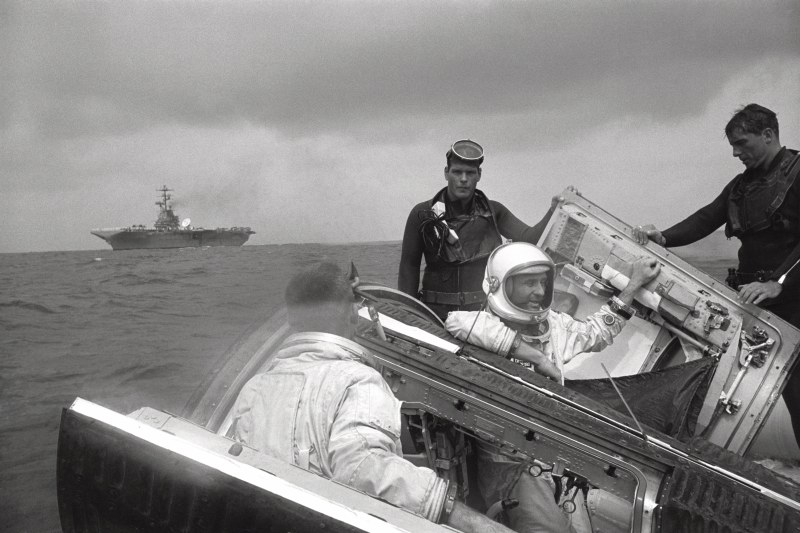 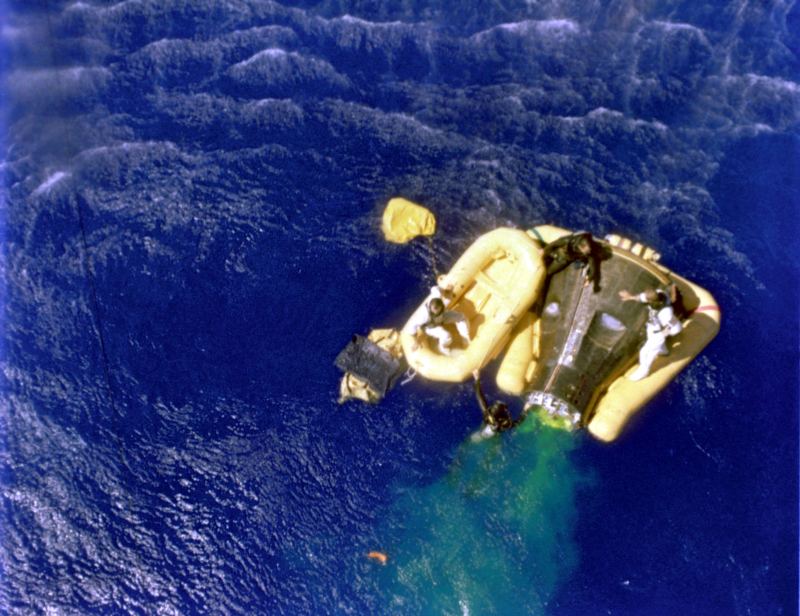 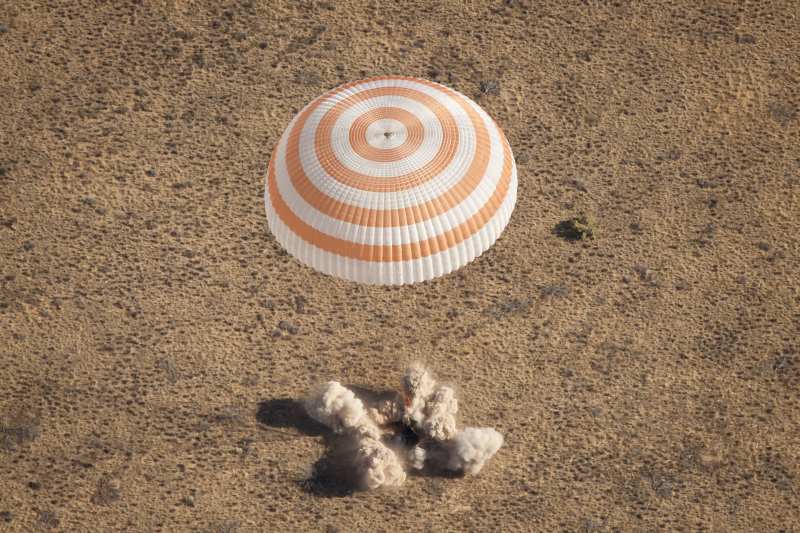 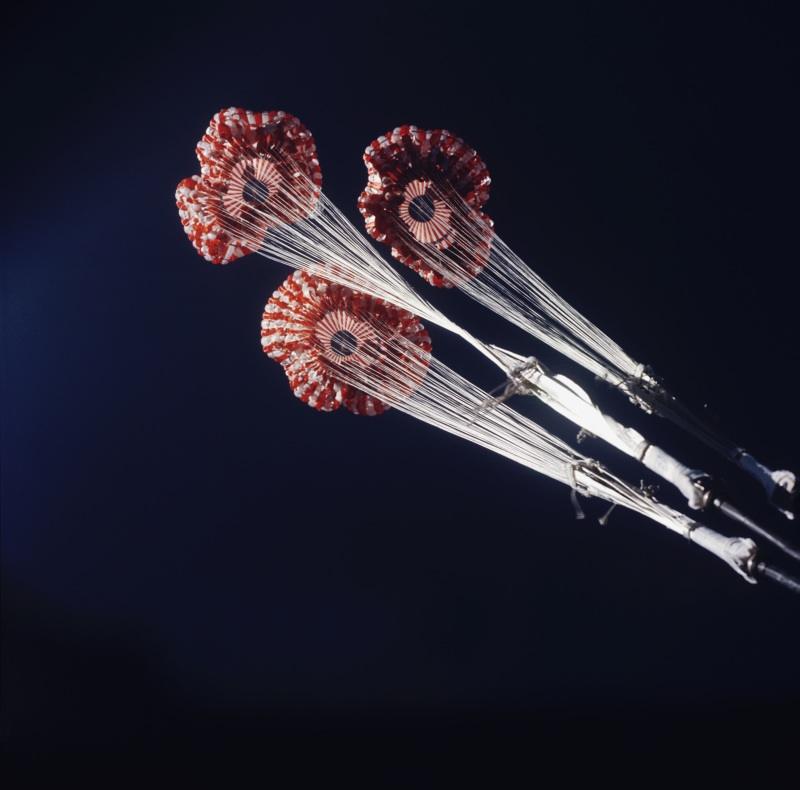 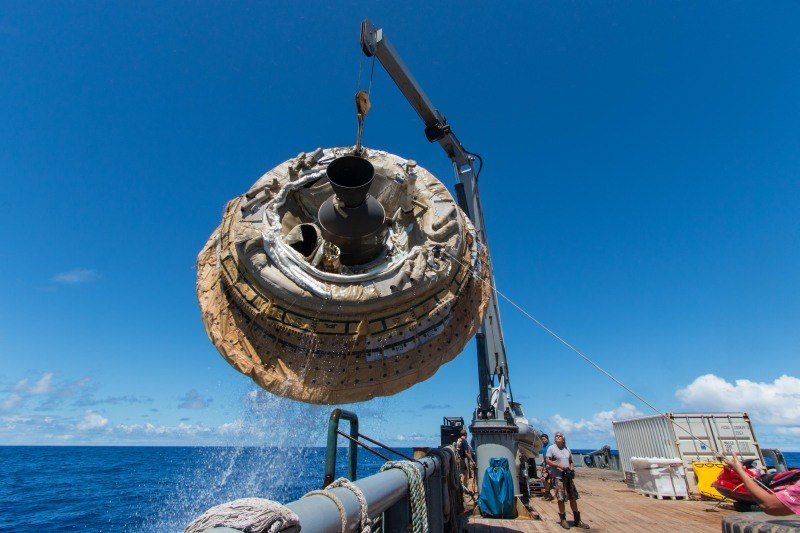 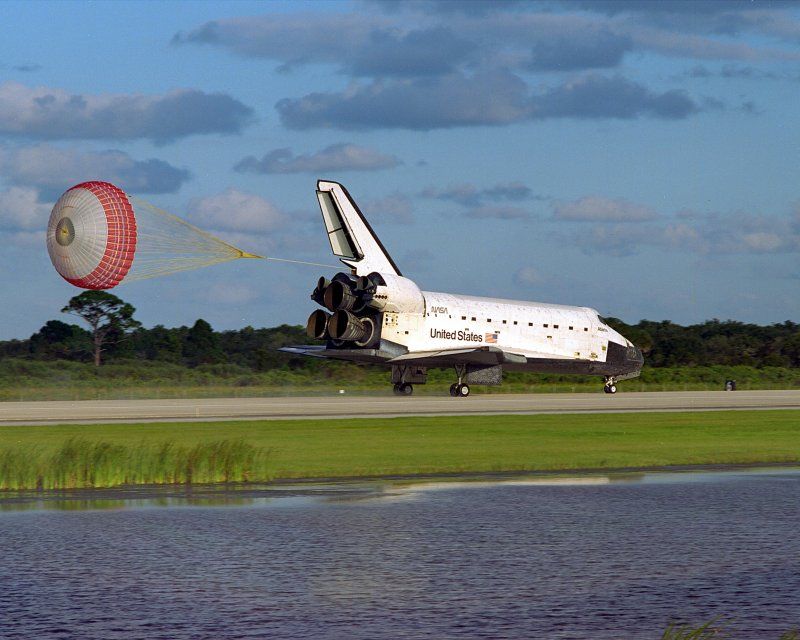 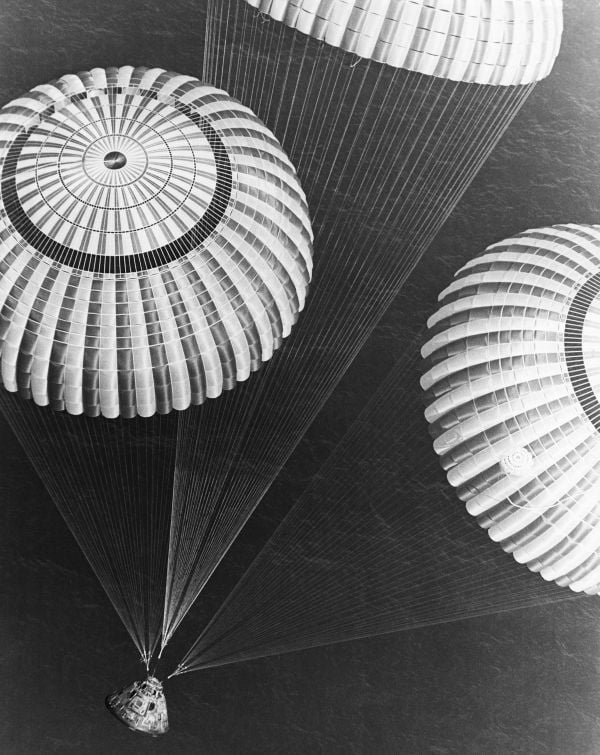 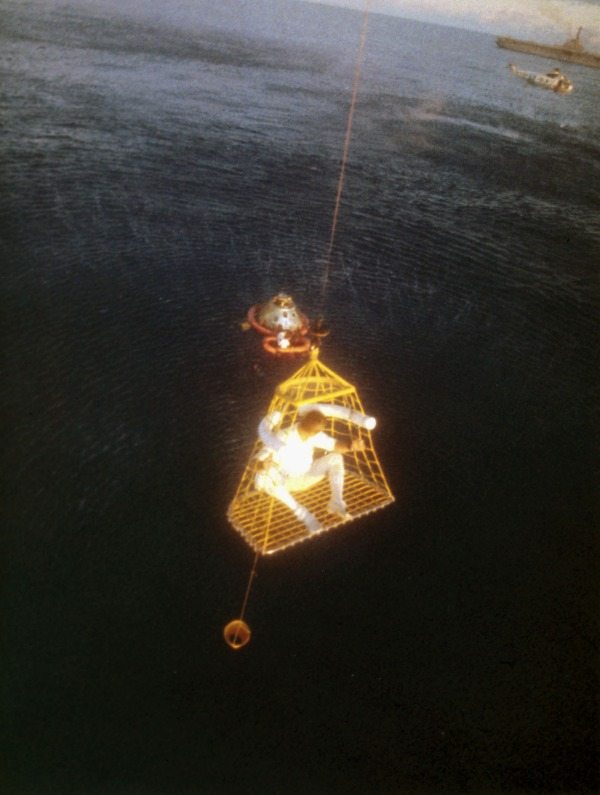 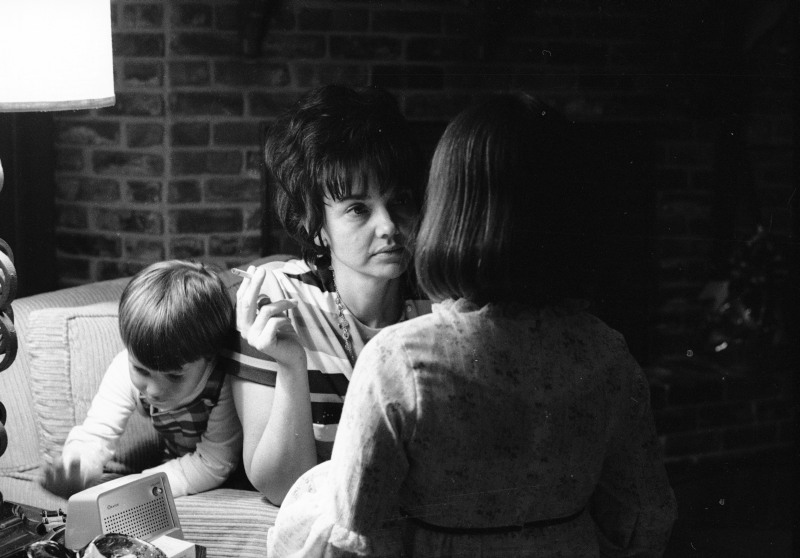 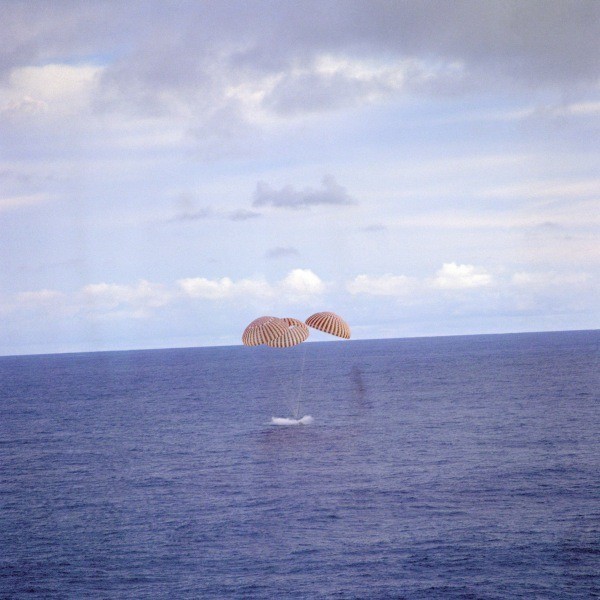 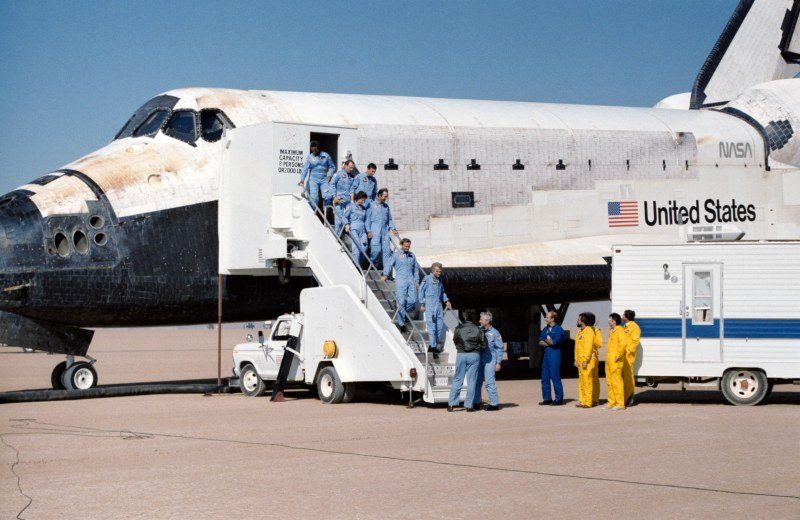 1 of 27
Apollo 11 astronauts Neil Armstrong, Michael Collins, and Buzz Aldrin, await helicopter pickup from their life raft, July 24, 1969.Getty Images/Bettman
2 of 27
Gemini 7 astronauts James A. Lovell and Frank Borman arriving on carrier Wasp after splashdown, December 16, 1965.Getty Images/Time Life Pictures
3 of 27
Apollo 13 astronaut John L. Swigert Jr. is lifted aboard a helicopter while James A. Lovell Jr. waits for his turn, April 17, 1970.Flickr/NASA
4 of 27
Alan Bartlett Shepard Jr. shortly after his "Freedom 7" splashdown in the Atlantic Ocean, May 5, 1961. Getty Images/MPI
5 of 27
Alan Bartlett Shepard Jr. being airlifted to safety after his "Freedom 7" splashdown in the Atlantic Ocean, May 5, 1961.Getty Images/MPI
6 of 27
Commander of the Apollo 17 lunar mission Eugene Cernan is welcomed back to Earth by a US Navy Pararescueman, December 19, 1972.Getty Images/NASA
7 of 27
Astronauts Charles Conrad Jr. and L. Gordon Cooper Jr. and walk across the U.S.S. Lake Champlain following splashdown, August 29, 1965.Flickr/NASA
8 of 27
After Gemini 8 made an emergency landing, astronauts Neil Armstrong and David Scott await pick-up inside their capsule, March 17, 1966.Getty Images/Time Life Pictures
9 of 27
Astronauts Thomas P. Stafford and Walter M. Schirra leaving capsule after Gemini 6 splashdown, December 16, 1965.Getty Images/Time Life Pictures
10 of 27
Soyuz TMA-08M capsule from the International Space Station just minutes after landing in a remote area in Kazakhstan, September 11, 2013.Flickr/NASA
11 of 27
The crew that didn't make it home: The remains of the crew of the Space Shuttle Challenger being transferred, Dover Air Force Base, Delaware, August 30, 1988. Challenger disintegrated 73 seconds into its mission, killing seven crew members. Getty Images/Space Frontiers
12 of 27
Apollo 13 astronauts wave aboard an aircraft carrier after splashdown in the Pacific, April 17, 1970.Getty Images/Bettmann
13 of 27
The Space Shuttle Columbia on the runway at Edwards Air Force Base, December 9, 1983. Getty Images/Space Frontiers
14 of 27
NASA Space Shuttle Columbia landing at Edwards Air Force Base, January 1986. Getty Images/George Fry
15 of 27
Navy divers install a stabilizing flotation collar around a Mercury space capsule nicknamed "Faith 7" after splashdown, May 16, 1963.Flickr/NASA
16 of 27
Astronauts Thomas P. Stafford and Eugene A. Cernan sit with their Gemini 9 spacecraft awaiting the recovery ship U.S.S. Wasp, June 6, 1966.Flickr/NASA
17 of 27
Astronauts L. Gordon Cooper Jr. and Charles "Pete" Conrad Jr. exit Gemini 5, August 29, 1965.Flickr/NASA
18 of 27
The Soyuz TMA-21 spacecraft lands in a remote area in Kazakhstan, September 16, 2011. Flickr/NASA
19 of 27
Three parachutes open above the capsule carrying crewmen from the Skylab 3 mission, September 25, 1973.Getty Images/Corbis
20 of 27
NASA's Low-Density Supersonic Decelerator is lifted aboard the Kahana recovery vessel, June 28, 2014.Flickr/NASA
21 of 27
Space Shuttle orbiter Atlantis lands at the Kennedy Space Center Shuttle, October 6, 1997.Flickr/NASA
22 of 27
The Apollo 17 spacecraft glides to a safe splashdown southeast of American Samoa, December 19, 1972.Flickr/NASA
23 of 27
Apollo 10 astronaut Eugene Cernan being hoisted aboard a helicopter for transfer to the recovery ship USS Princeton, April 15, 1969. Getty Images/Science & Society Picture Library
24 of 27
A landing that almost didn't happen: Marilyn Lovell, wife of astronaut JIm Lovell, holds a cigarette as she speaks with her children, Houston, Texas, April, 1970. The Apollo 13 crew was forced to abort their lunar landing after an on-board explosion, but made it home safe on May 18. Getty Images/Bill Eppridge
25 of 27
Apollo 13 Command Module lands in the south Pacific Ocean, April 17, 1970.Flickr/NASA
26 of 27
The crew of the STS 61-A mission leave the orbiter after landing, November 6, 1985.Flickr/NASA
27 of 27 26 Photos Of NASA Landings Throughout The Decades
View Gallery

The launches may get more press, but the engineering prowess required to pull off safe NASA landings is a thing of beauty. And so are the decades worth of photographs documenting the joyous return of the brave men and women who'd just went exploring beyond the ether.

The landing of the first shuttle in 1981 — the STS-1, the world's first reusable space vehicle — drew a crowd of 200,000-plus to Edwards Air Force Base in California and ushered in a new era of spaceflight.

Prior missions required that space capsules return to Earth with a so-called "splashdown" water landing, meaning that the Navy had to be on standby to recover the astronauts.

The risks of a splashdown are many, from a blown hatch door leading to a near-drowning, to the capsule missing its mark entirely, landing hundreds of miles away — both of which have actually happened to NASA astronauts.

Remarkably, however, the more primitive, parachute-aided splashdown landings have never caused fatalities. The only reentry-related astronaut deaths came in 2003, when the space shuttle Columbia's thermal protection system failed and the craft disintegrated in the atmosphere, killing all seven on board.

Columbia was a haunting reminder of the 1986 Challenger disaster, as well as the famous near-disaster of Apollo 13 — both additional reminders of why the men and women in the photographs above look so fortunate to have ventured into space and made it safely home to their loved ones.

The gallery above features a mix of the splashdown landings from the early days of spaceflight with the far more familiar runway landings of the space shuttle.

Also included above are more recent photos of a Soyuz capsule from the International Space Station gliding safely to rest on the Kazakhstan steppe, aided by rocket brakes so precise that they engage at literally the last second, bringing both the mechanical marvel and the real-life superheroes inside home safely.

Love exploring NASA? Check out dozens of photos from the agency's glory days. Still feeling adventurous? How about Hubble telescope photos from the farthest reaches of space.