This Pew report reveals the fastest growing religion in the world. The answer will likely surprise and, sadly, terrify many in the U.S. 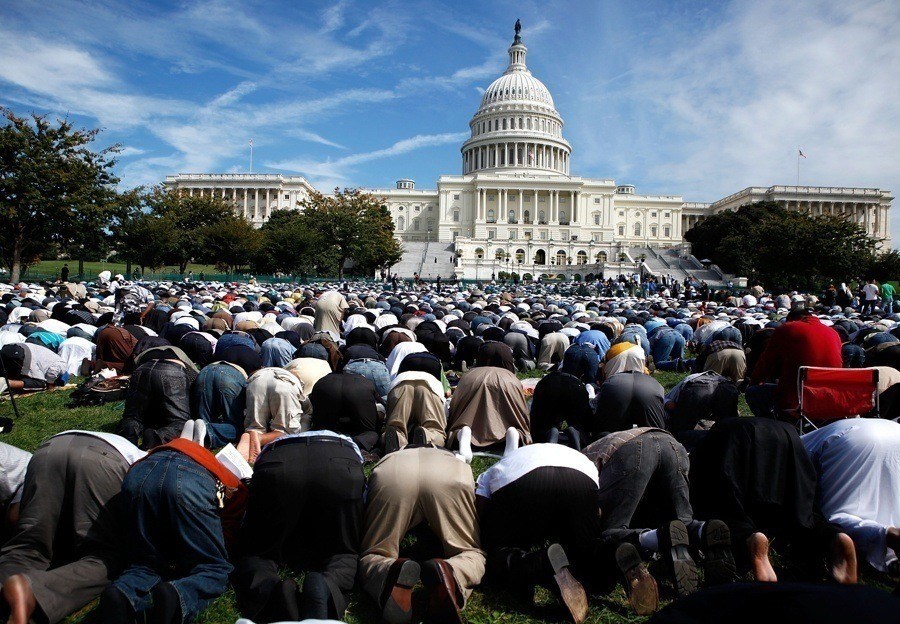 Muslims pray during the “Islam on Capitol Hill 2009” event — meant to promote the diversity of Islam in America — at the U.S. Capitol on September 25, 2009.

On April 18, anti-Islam protestors will rally outside the Georgia State Capitol in Atlanta and march on to CNN headquarters, shredding images of President Obama, Hillary Clinton, and the Prophet Muhammad along the way.

It could get even more volatile than that, though. In Capitol Police Director Lewis G. Young’s warning to Capitol employees, “You are hereby notified that protest organizers have encouraged their participants to carry loaded long guns [rifles, shotguns, etc.].”

According to an email from James Stachowiak, one of the suspected organizers of the event, the protestors seek to “raise public awareness to what we perceive as a threat to our nation from Islamic immigration and refugees.”

And, sadly, as the anti-Islam tide in the U.S. (not to mention elsewhere) appears to be ever rising — not just among Stachowiak and the like, but among those with a far larger soapbox — extremists of that sort would be terrified to know the statistics that underpin their twisted fears.

According to a report last year from the Pew Research Center, Islam is easily the fastest growing religion in the world (73% growth rate for Islam vs. 35% for Christianity) and its followers will nearly equal the amount of Christians worldwide by 2050.

And in the United States specifically, between now and 2050, the percentage of the population that is Christian will decrease by 12% while the percentage that is Muslim will more than double.

Now, even after that decrease and that doubling, the U.S. in 2050 will still be 66% Christian and just 2.1% Muslim. And the government’s plan to accept refugees — certainly one of the main things, if not the main thing Stachowiak and his cohorts are concerned about — isn’t going to do anything to change that.

Sadly, people like Stachowiak can rest easy: The State Department revealed last week that the U.S. is way behind on its refugee acceptance goals for 2016.

After learning about the fastest growing religion in the world and trends in the United States, take a look at these Syrian Civil War photographs to see what’s fueling much of the refugee crisis worldwide.