While many have worshipped the bizarre specimen for its purported powers of everlasting life, others believe it's a man-made creation. 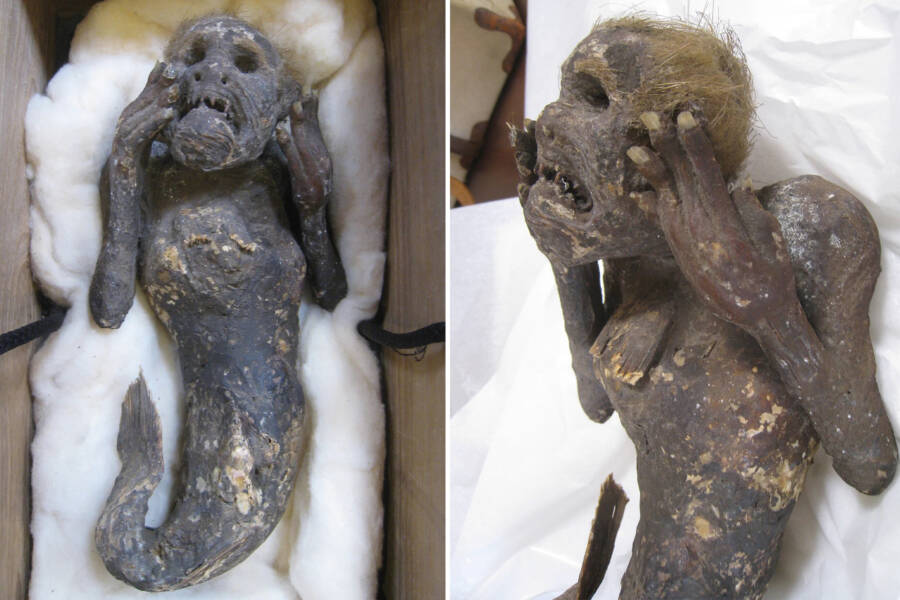 Kinoshita HiroshiThe mummy was allegedly fished from the waters off Shikoku island between 1736 and 1741.

A mummified “mermaid” allegedly caught in the Pacific Ocean between 1736 and 1741 is now finally being studied for the very first time. The 300-year-old corpse had spent decades being prayed to at a Japanese temple for its believed powers of immortality — until Hiroshi Kinoshita, of the Okayama Folklore Society, found it in a box.

The mummy’s ghastly grimace was only matched by its confounding physiology. While it measured a mere 12 inches long, the upper half certainly resembled that of a human being, according to LiveScience. The lower half, however, increasingly tapered off and culminated in a fish-like tail, complete with scales.

While the corpse is now being analyzed by Kurashiki University experts, its origin story is just as engrossing.

Kinoshita only recently stumbled upon the box holding this mysterious mummy at Enjuin Temple in Asakuchi city. While it had been put on display some 40 years ago for worshippers to pray for longer lives, the mummy was eventually tucked away for preservation. Kinoshita found a curious letter from 1903 accompanying it. 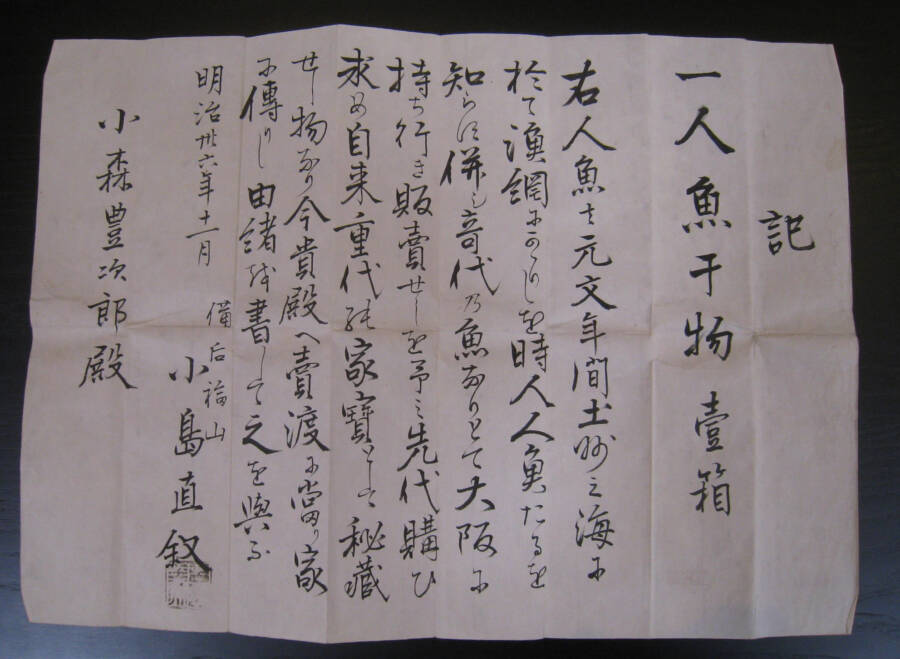 Kinoshita HiroshiThe letter was dated to 1903 and claimed fishermen sold the “unusual fish” to an affluent family.

Caught by fishermen sometime between 1736 and 1741 and sold to a wealthy family, according to the letter, the mummy was passed down for generations before Enjuin Temple acquired it. According to New York Post, Kinoshita is convinced its appeal is based on folklore.

“I heard that some people, believing in the legend, used to eat the scales of mermaid mummies.” 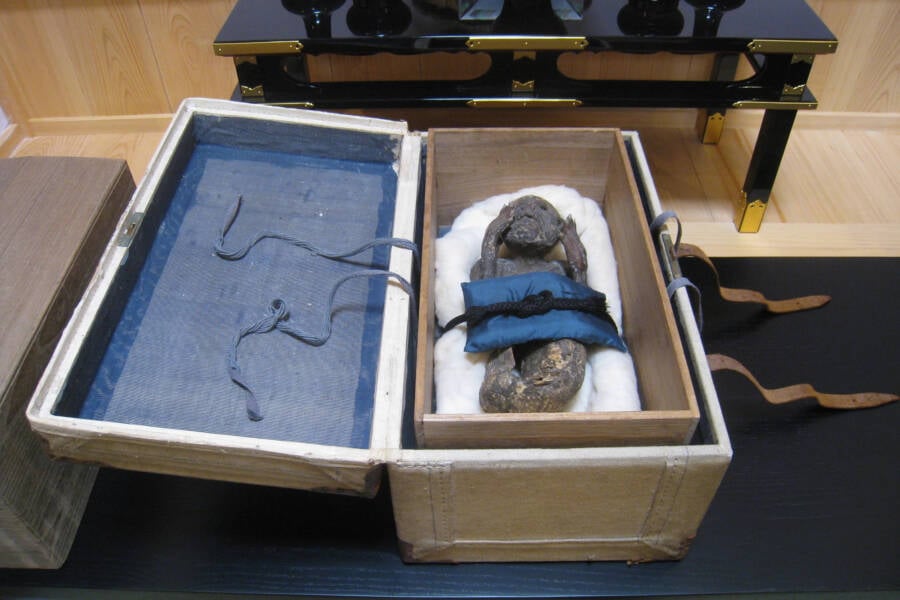 Kinoshita HiroshiThe mummy was worshipped by locals for its purportedly supernatural powers.

Who exactly owned the mummy prior to the temple’s acquisition remains a mystery, while the reasons for its worship are clear — and range from the “Yao-Bikuni” legend of everlasting life to predictions of the future.

“This ‘Yao-Bikuni’ legend is also preserved near the temple where the mermaid mummy was found,” said Kinoshita. “There is also a legend that a mermaid predicated an infectious disease.”

“We have worshipped it, hoping that it would help alleviate the coronavirus pandemic even if only slightly,” said Kozen Kuida, chief priest at Enjuin Temple.

After centuries as a folkloric totem, the mummy underwent its first analysis earlier this year. While experts took CT scans on Feb. 2, Kinoshita won’t rest until comprehensive DNA tests have concluded. He believes there’s a mundane explanation for the bizarre specimen.

“Of course, I don’t think it’s a real mermaid,” he said. “I think this was made for export to Europe during the Edo period, or for spectacles in Japan. The legend of mermaids remains in Europe, China and Japan all over the world. Therefore, I can imagine that people at that time were also very interested in it.”

“I think it is made from living animals and we would like to identify them by CT scans or DNA testing. It looks like a fish with scales on the lower body and a primate with hands and a face on the upper body.” 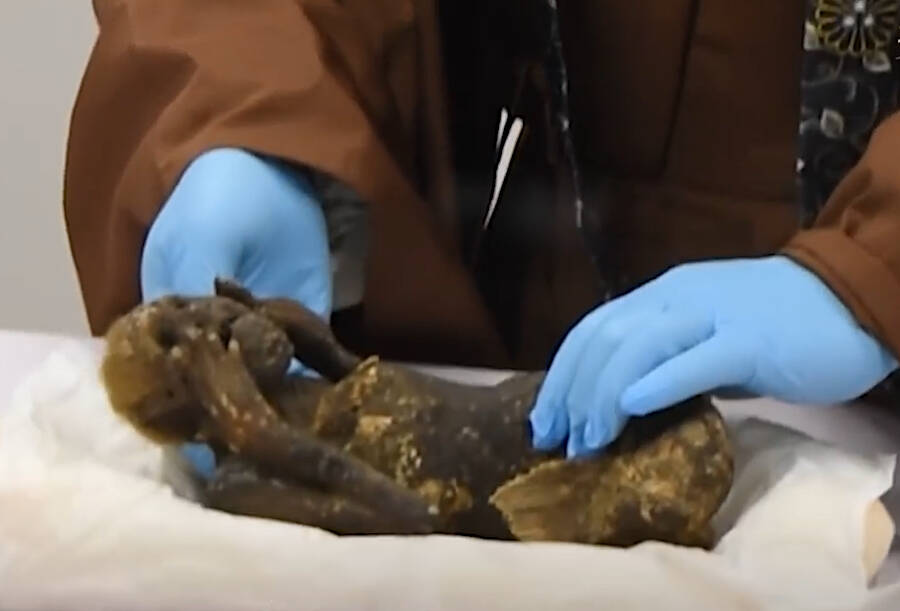 The Asahi ShimbunThe mummy underwent a CT scan on Feb. 2 and is now undergoing DNA testing.

Ultimately, Kinoshita’s theory is far more plausible than the notion of a newfound species being fished out of the Pacific. From the pointy teeth and grimacing face to the mammalian hands and hairy head and brow, the upper half appears to have been taken from a monkey. The lower half was likely fished from the water and somehow attached to the torso. However, the mystery will continue until DNA testing has wrapped.

Kinoshita said the results will be made public later this year.

After reading about the “mermaid” mummy discovered in Japan, learn about the 500-year-old Incan “princess” mummy from Bolivia. Then, read about the world’s oldest mummy.