In the 18th and 19th centuries, the Ashanti Empire ruled over much of modern-day Ghana — and tirelessly fought back against British colonization.

Out of the dense forests of West Africa rose the Ashanti Empire, a kingdom that grew to an unprecedented position of power in the 1700s and 1800s. Though the Ashanti state first emerged as a tiny outpost, it eventually evolved into a complex and wealthy kingdom that held dominion over millions of subjects and an area the size of Wyoming.

Based in present-day Ghana, the Ashanti Empire swallowed its neighbors until it was acknowledged as “indisputably the greatest and the rising power of western Africa.” At its peak in the late 18th century, the Ashanti Empire ruled over 4 million people and controlled hundreds of miles of the West African coastline. But its reign would not last forever.

Eventually, the British sought to colonize the region. The Ashanti Empire strongly resisted the invasion and even fought five gruesome wars in an attempt to keep the Europeans out of their homeland. But as the power of the Ashanti gradually weakened, they were eventually forced to surrender.

Still, even their final defeat wasn’t conclusive enough to wipe them off the map entirely. To this day, the Ashanti remain a proud people under the leadership of an unbroken line of kings in their own region of Ghana.

The Origins Of The Ashanti Empire 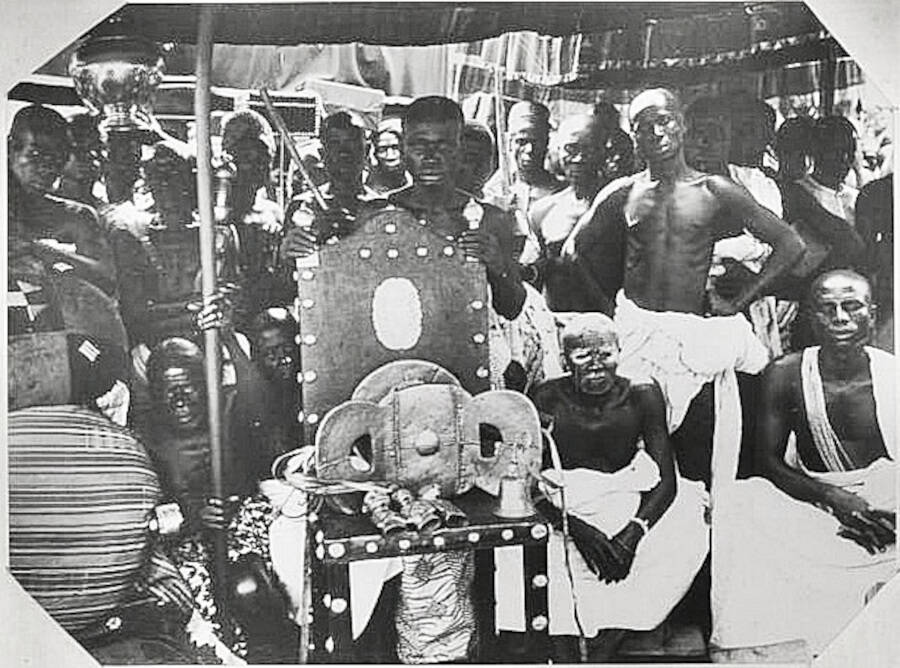 The National ArchivesThe power of the Ashanti Empire is vested in the sacred Golden Stool. Even the king himself is only allowed to touch the stool once in his life, during his coronation ceremony.

No one is sure exactly where the Ashanti originally came from, but we do know that they are a branch of the Akan people. Ashanti traditions hold that they first emerged from holes in the forest floor back in ancient times and later migrated from the coast into the interior of modern Ghana.

Some scholars believe that the ancestors of the Ashanti people actually belonged to the older Ghana Empire — based in present-day Mauritania and Mali. Others think that the Ashanti trace their roots back to Egypt.

But wherever they came from, there’s no question that their new home was inhospitable. Complex civilizations rarely form in the dense jungle, but the Akan people found something worth staying for: gold. From the 11th century onward, they built vast trade networks throughout West Africa and beyond, as other kingdoms and nations clamored for their precious metal.

By the 15th century, the Akan people had attracted the attention of European traders. Though the Portuguese were the first Europeans to make contact with the Akan people, the Dutch and the British would soon follow.

As time marched on, various Akan groups rose and fell based on the strength of their trade wealth. With some of the richest gold deposits in the world, many Akan kingdoms and cultures battled for supremacy, including the Ashanti. But the Ashanti didn’t become the dominant group right away. Instead, another group rose to the top first: the Denkyira.

The powerful kings of the Denkyira ensured the obedience of smaller states, often by taking high-ranking hostages during the 17th century. The most memorable of these hostages was an Ashanti man named Osei Tutu.

After years in captivity, Osei Tutu escaped and eventually made his way to the Ashanti capital of Kumasi to be crowned Asantehene, or king. He then wisely bided his time, building an army and an alliance with neighboring kingdoms. Interestingly enough, the word “Ashanti” literally means “because of war,” and that would soon prove to be a very appropriate name.

How The Ashanti Empire Grew Through Warfare, Gold, And The Slave Trade 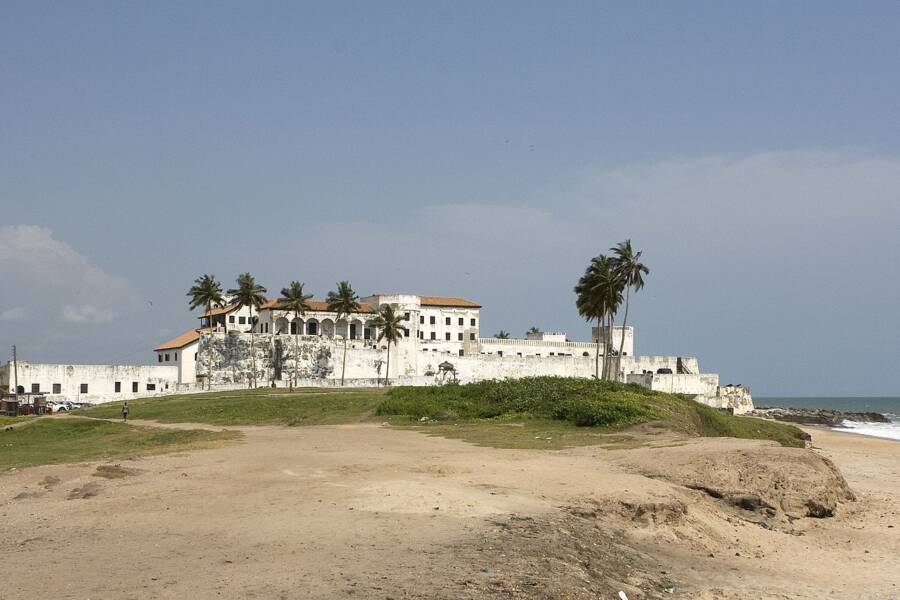 Wikimedia CommonsElmina Castle, on Ghana’s southern coast, was a rich source of profits for the Ashanti. There, European traders paid generous prices for Ashanti gold and captives doomed to the slave trade.

By the late 17th century, Osei Tutu had become a formidable leader and an extremely effective organizer among the Ashanti people and his other allies — especially when it came to his plans to overthrow the Denkyira. And from 1698 to 1701, the Ashanti fought tirelessly to defeat their enemies.

After the Ashanti emerged victoriously, Osei Tutu instructed one of his allies, the priest Okomfo Anokye, to enthrone him on a golden stool to represent his ultimate supremacy over his allied chieftains and kings.

At the time, the Golden Stool was said to have descended from heaven. And so after Osei Tutu was rewarded with the throne, it soon became a sacred symbol of both the Ashanti kings and their loyal subjects.

Years later, Osei Tutu’s heirs expanded the kingdom far to the north and along the southern coast of West Africa, where European trading ports offered modern weaponry and other items in return for gold — and slaves.

Slavery had been a feature of Akan societies long before the rise of the Ashanti. For the rapidly-expanding Ashanti Empire, their prisoners of war were considered a valuable “commodity” during the slave trade.

Enslaved captives and gold thus fueled the growth of the empire, but when British explorers began traveling further into the region past the coastline, this was not what they found most outrageous.

Why Tensions Rose With Britain 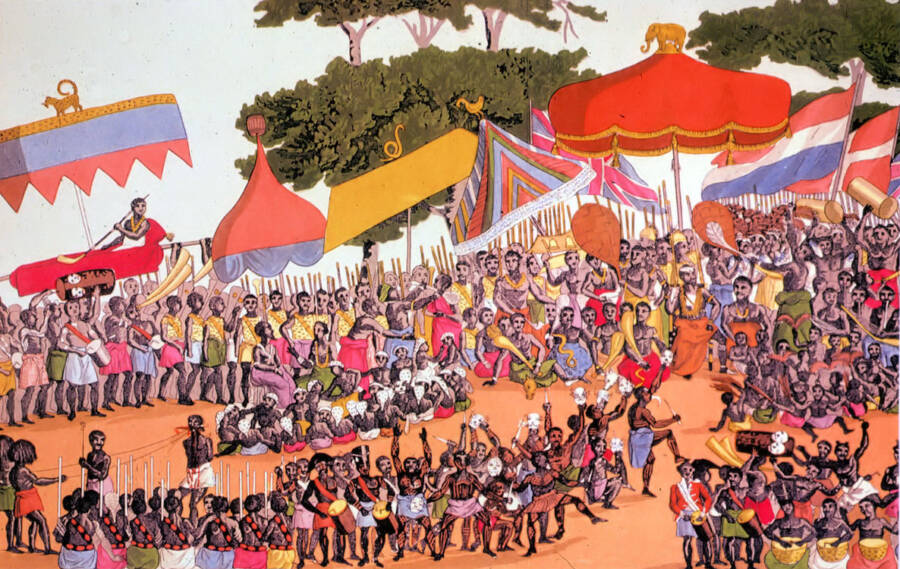 Wikimedia CommonsThomas Bowdich was one of the first Europeans to explore the Ashanti region beyond the coastline, witnessing important cultural events such as the Yam Festival, a celebration of thanksgiving.

Thomas Bowdich, a young British commercial agent, was among the first Europeans to travel beyond the coast of the empire in 1817. He described scenes of splendor, including nobles clad in bright kente cloth and regiments of soldiers in elaborate court processions around the gold-laden king.

But he also described the more disturbing aspects of the empire, including a grisly scene of human sacrifice: “Our attention was forced … to a most inhuman spectacle … it was a man whom they were tormenting previous to sacrifice; his hands were pinioned behind him, a knife was passed through his cheeks, to which his lips were noosed like the figure of 8.”

Bowdich continued, “One ear was cut off and carried before him, the other hung to his head by a small bit of skin; there were several gashes in his back, and a knife was thrust under each shoulder blade; he was led with a cord passed through his nose, by men disfigured with immense caps of shaggy black skins, and drums beat before him.”

Still, the British decided to establish the Gold Coast colony in 1821, very close to the Ashanti people. This offered new opportunities for trade between the Ashanti and the British — but it also paved the way for a collision course that pitted Europe’s most powerful empire against Africa’s.

The increased trade slowly shook the Ashanti Empire from the ground up. Though many of the king’s subjects preferred to trade with the British for European goods, gold would soon become their only means of exchange — since Britain was in the process of abolishing the slave trade.

Before long, trade relations declined, and tensions rose over some of the Ashanti people’s practices — including their involvement in the slave trade — as well as disputes over some local regions. And when the British moved toward annexation, it was only a matter of time before war erupted.

How The Ashanti People Fought Back Against Colonization For Decades

Tensions came to a head when Ashanti soldiers murdered an African soldier in the British service in 1823. Though the attack did not appear to be planned by the king — and was likely the result of a private conflict — British officer Sir Charles MacCarthy decided to lead a campaign against the Ashanti.

But MacCarthy was caught by surprise during the Battle of Nsamankow by 10,000 Ashanti soldiers. His small force of 500 men was no match. The local militia fled, and only 20 British soldiers were able to escape the chaos. As for MacCarthy, he shot himself to avoid being captured. His skull was later lined with gold and used as a drinking cup for the Ashanti king.

Though the First Anglo-Ashanti War was largely a disaster for the British, it would be followed by a string of future wars that saw Ashanti power slowly diminish and fade away without ever dying out completely. 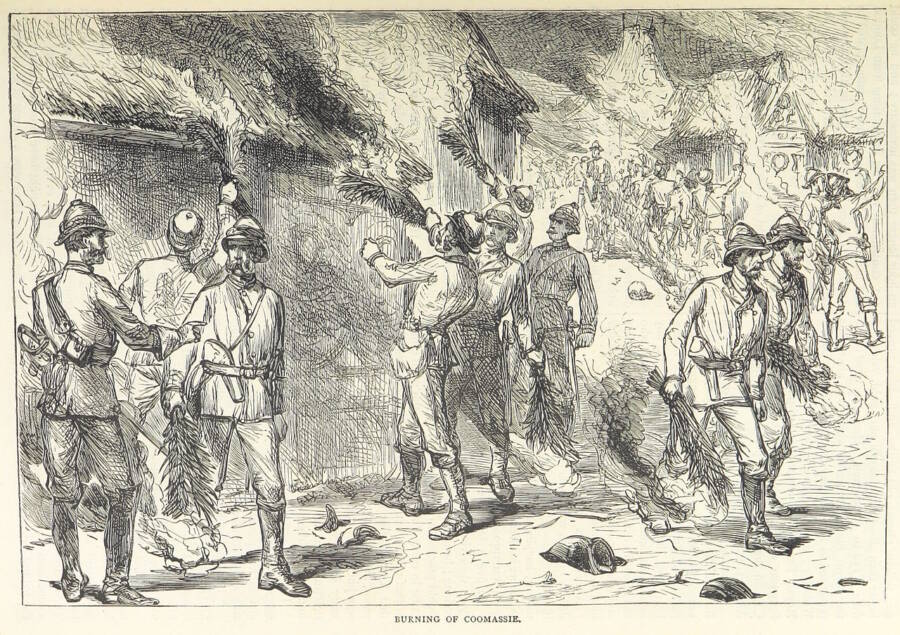 The British Library/Wikimedia CommonsThe burning of Kumasi was a shock to the Ashanti, who’d enjoyed success in warfare for decades.

Perhaps the greatest shock came in 1874, when British troops successfully reached Kumasi and burned the capital to the ground, destroying the royal palace and its “rows of books in many languages.”

What ended the warfare was an almost unparalleled act of arrogance. With Asantehene Prempeh I in exile, the British Governor of the Gold Coast, Sir Frederick Hodgson, traveled to Kumasi in 1900 to demand the submission of the Ashanti. With the empire’s nobles assembled before him, he demanded:

“Where is the Gold Stool? Why am I not sitting on the Golden Stool at this moment? I am the representative of the paramount power; why have you relegated me to this chair?”

The governor’s insulting speech enraged the Ashanti people. Under the leadership of Queen Mother Yaa Asantewaa, the Ashanti decided to attack and besiege Hodgson and his men in their Kumasi offices. Only months later would British colonial forces defeat the last of the Ashanti rebels, and their empire was officially declared a Crown colony in 1902.

All the while, the Golden Stool was nowhere to be found.

The Modern Survival Of The Ashanti Kingdom 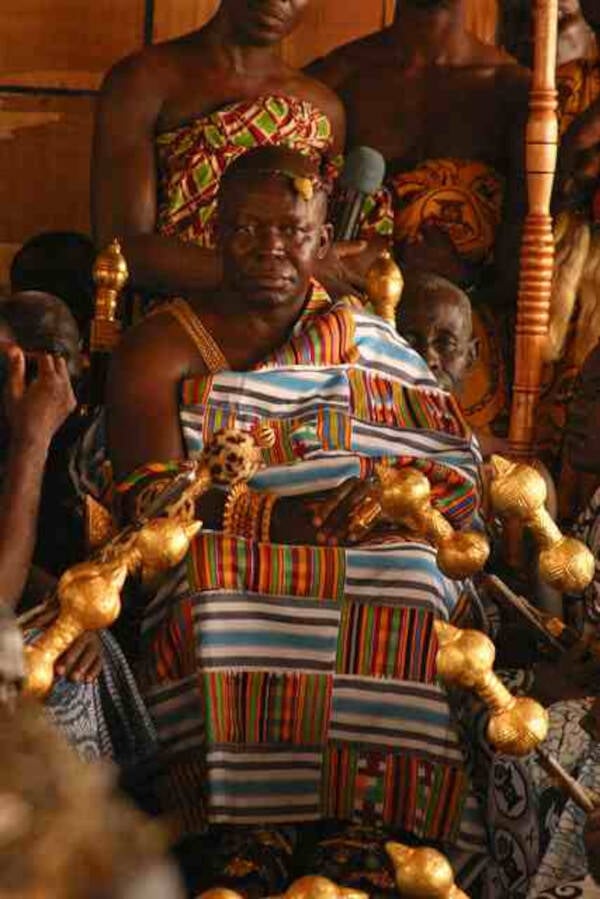 Wikimedia CommonsToday, the Asantehene is Osei Tutu II, named for the monarch who set the Ashanti on their original path to glory.

Though the British ruled the Gold Coast — including the Ashanti Empire — for years, their reign did not last forever. In 1957, the colony became a dominion of the British Commonwealth. And just a few years later, the region won its independence as the Republic of Ghana in 1960.

Around this same time, Kwame Nkrumah was installed as the very first president of Ghana. But just because there was a new type of administration in the region didn’t mean that the Ashanti kings disappeared.

Indeed, even during colonial times, British authorities had allowed the Ashanti kings to reign. Though their rule was largely in name only, they did what they could to maintain their position. And even before the region won independence, the kings were recognized as a political entity in 1935.

As the modern nation of Ghana began to take shape, the administrative region of Ashanti was formed in the old imperial heartland, with Kumasi as its capital. There, the kings could continue many of their customs in peace. That said, some of the Ashanti people’s older practices have been firmly left in the past, including slavery and involvement in the slave trade.

Upon independence, Asantehene Prempeh II would become the first Ashanti ruler to reign in a country free of British influence. Power passed peacefully to his successor in 1970, and in 1999, to the current king, Osei Tutu II.

Today, the descendants of this complex nation proudly maintain many of their traditions, including their love of gold. The king is a central figure in daily life and the focus of important celebrations, such as the Akwasidae Festival, which is held every six weeks to commemorate the ancestors of the Ashanti — who helped pave the way for where the descendants are today.

After reading about the Ashanti Empire, find out more about Shaka Zulu, their equally memorable counterpart far to the south. Then, learn how Malian emperor Mansa Musa built one of the largest fortunes in history.