He earned every honor from the United States military plus five from abroad at 19. But that's not all — Audie Murphy also became a Hollywood sensation.

On a cold January afternoon in 1945, Second Lieutenant Audie Murphy watched with mounting alarm as over 200 German troops emerged from the woods. But instead of succumbing to panic, the 19-year-old Murphy jumped on a burning tank — and began spraying bullets at his enemies.

For his bravery, he would later win the prestigious Medal of Honor, along with several other awards and medals. But that January day was just one chapter in Murphy’s remarkable story. His life had started in poverty, led to wartime glory and Hollywood fame, and ended in utter tragedy.

This is the life — and death — of war hero and Hollywood star Audie Murphy. 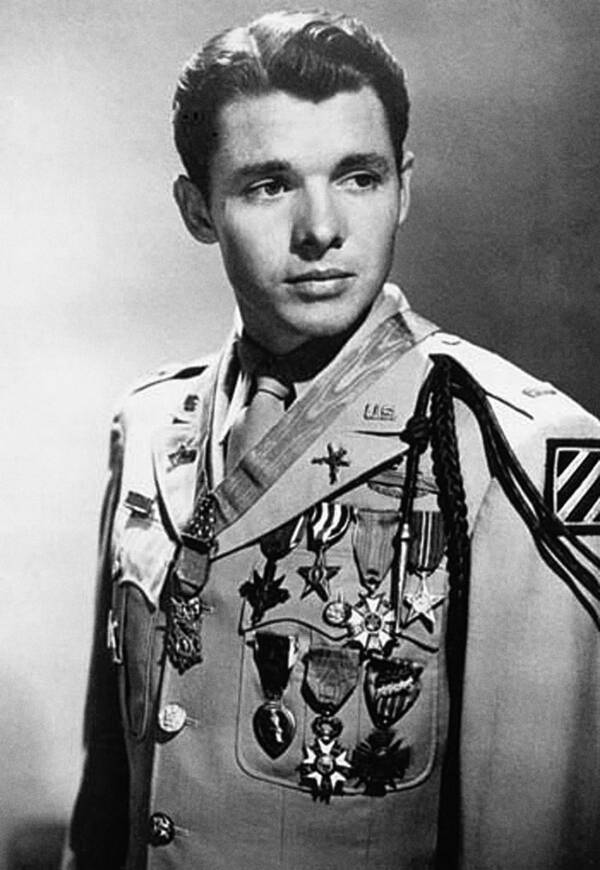 U.S. Army War hero Audie Murphy, standing tall with his many medals in 1948.

By the time he was 20 years old, Audie Leon Murphy had achieved worldwide renown. But his early years were difficult. One of 11 children, Murphy was born on June 20, 1925, to a family of poor sharecroppers in Texas. And he took on a very heavy load at a young age.

His father abandoned the family. His mother died. And to feed his siblings, Murphy took to killing rabbits with a slingshot or a borrowed rifle. Since he could only afford a dime’s worth of bullets, Murphy learned not to miss.

But despite Murphy’s best efforts to help his family, his siblings were steadily shipped off to live with relatives or in orphanages. So, 10 days after his 17th birthday, Audie Murphy decided to go fight in World War II. However, there was just one problem — he was considered too young and too small.

“Unfortunately the [Marine] corps was looking for men, men italicized,” Murphy wrote in his memoir To Hell and Back. “A seargent glanced over my skinny physique. My weight did not measure up to Leatherneck standards.”

After being rejected by both the Marines and the paratroopers in the military, he was eventually accepted by the U.S. Army — but only when his sister signed an affidavit that falsely added a year to his age. At the time, Audie Murphy stood just 5’5″ tall and weighed only 112 pounds.

“Thus, with a pocket full of holes, a head full of dreams, and an ignorance beyond my years, I boarded a bus for the induction center,” Murphy wrote. “Previously I had never been over one hundred miles from home.”

Following basic training, Murphy was assigned to the 15th Regiment, 3rd Infantry Division, and arrived in Casablanca, Morocco, in 1943. Just a few months later, he fought in the invasion of Sicily, charged the beaches at Anzio, and helped the Allied forces push toward Rome.

“I have seen war as it actually is,” Murphy later wrote, “and I do not like it.”

But despite his private feelings about the conflict, Murphy shone as a soldier. A skilled marksman and tactician, he swiftly ascended the ranks — helped, in part, by multiple deaths, injuries, and transfers among his superior officers. By 1944, he and his unit were sent to fight in France.

How Audie Murphy Won The Medal Of Honor 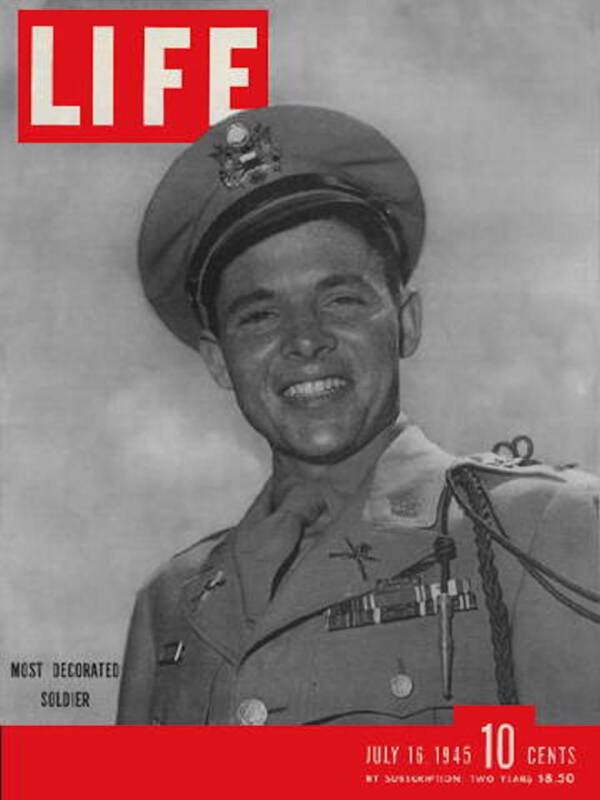 By January 1945, Audie Murphy had already won two Silver Stars and the Distinguished Service Cross. And at just 19 years old, he was now in command of his own unit. But Murphy would be tested on January 26, in Holtzwihr, France, an area that was also known as the Colmar Pocket.

On that day, Murphy and his men were holding a roadway and awaiting reinforcements when over 200 Germans with Panzer tanks burst out of the woods nearby. Fighting panic, Murphy ordered most of his men to retreat as he called Allied command and demanded reinforcements. As shells burst around him, an artillery commander asked about the Germans’ proximity.

“Just hold the phone and I’ll let you talk to one of the bastards!” Murphy said.

But amid the melee, Murphy suddenly saw an opportunity to fight back. While crouching by a burning tank, he realized that its gun was still operational. So he jumped onto the tank, aimed the gun, and started firing.

“My numbed brain is intent only on destroying,” Murphy later wrote. “I am conscious only that the smoke and the turret afford a good screen, and that, for the first time in three days, my feet are warm.”

By the time the smoke had cleared, Murphy had single-handedly taken down some 50 Nazi soldiers. “How come I’m not dead?” he wondered in a daze.

Of course, Murphy had done more than survive the onslaught — he’d become a legendary war hero. In the aftermath of his brave stand at the Colmar Pocket, he was awarded the prestigious Medal of Honor.

“Murph was a daredevil; he took chances that others just wouldn’t take. He was too daring for most of us,” recalled Brad Croeker, a Company B private. “His middle name was Lucky.”

By the time the war had ended, Murphy had earned every honor offered by the U.S. military at the time — plus a few from France and Belgium. He returned home one of the most decorated soldiers from the war with 33 medals and awards. Unsurprisingly, Murphy received a literal hero’s welcome and was soon feted with parades and interviews.

Meanwhile, a new chapter of his life loomed on the horizon. Audie Murphy had become such a compelling and admired figure throughout the United States that he was encouraged to try his hand at Hollywood.

From The Front Lines To Hollywood Fame 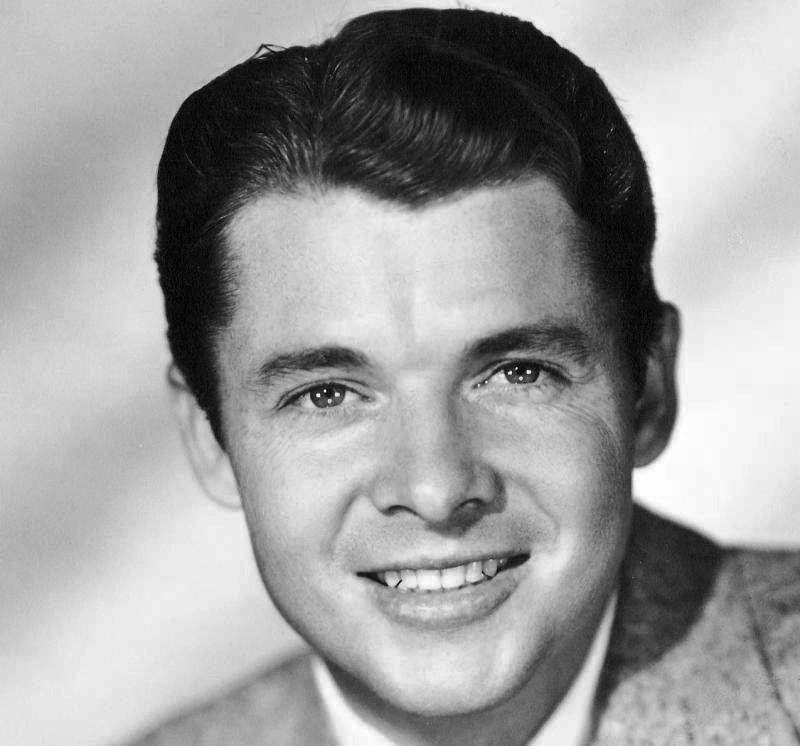 Wikimedia Commons Audie Murphy was catapulted into stardom the instant he returned home.

After Audie Murphy appeared on the cover of LIFE in July 1945, he caught the eye of actor James Cagney, who believed Murphy could conquer Hollywood. James and his brother, Bill, encouraged Murphy to become an actor.

Though Murphy believed he had “no talent,” he followed their advice and moved to Hollywood, where he nabbed a bit part in 1948’s Beyond Glory.

“I had eight words to say,” Murphy said. “Seven more than I could handle.”

Yet the film jobs kept coming, and so he kept accepting them. Murphy went on to appear in more than 40 films and even played himself in the 1955 adaption of his autobiography, which was also titled To Hell and Back.

Murphy found that experience odd and often wrenching. He called it a “strange jerking back and forth between make‐believe and reality” and recalled one scene where he had to relive the death of a friend.

In real life, his fellow soldier had stood up and was hit by machine gunfire. He died shortly thereafter in Murphy’s arms, telling him: “I goofed, Murphy.”

“When we shot the scene, we changed the part where Brandon died in my arms,” Murphy remembered. “That was the way it had really happened, but it looked too corny, they said. I guess it did.”

Despite Murphy’s humble assessment of his own skills as an actor, movie audiences apparently liked him. He was even voted the most popular Western actor in America in 1955 by motion picture exhibitors.

After 20 years of movie-making, Audie Murphy retired from the film business. Along the way, he’d gotten married, divorced, and married again. But one final chapter remained in his life. And after achieving glory in war and fame in Hollywood, this chapter would be the darkest one yet.

How Did Audie Murphy Die? 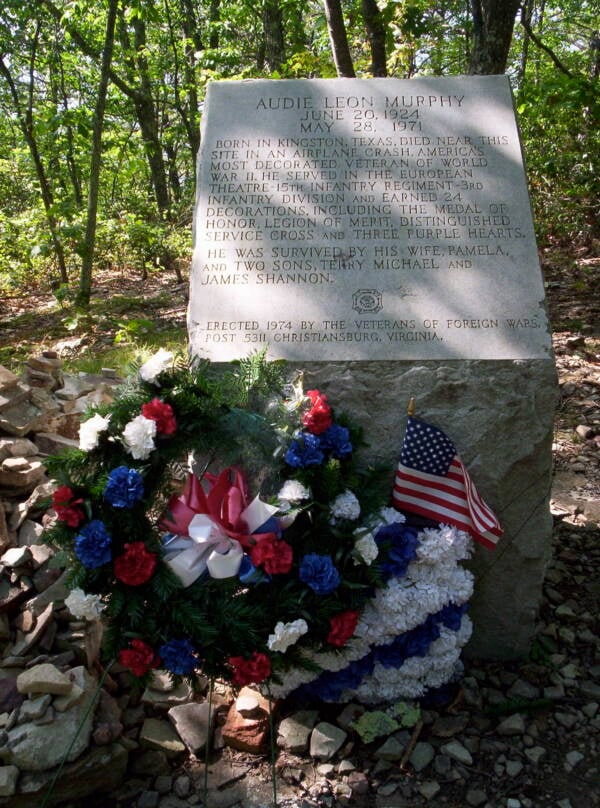 Jwalden/Wikimedia CommonsA monument to Audie Murphy at the site where he died.

Despite his success on the battlefield — both real and made up — Audie Murphy never fully shook the ghosts of war. When once asked how some people survived a war, Murphy responded: “I don’t think they ever do.”

Haunted by the “boys who never came back,” Murphy slept with a pistol under his pillow and experienced many common symptoms of post-traumatic stress disorder, including nightmares and depression. He developed an addiction to sleeping pills and soon began gambling.

This vice — and a series of bad investments — led Murphy to declare bankruptcy in 1968. And just three years later, Audie Murphy tragically died while exploring yet another way to make more money.

On May 28, 1971, Murphy and five other men boarded a twin‐engine Aero Commander plane in order to check out an investing opportunity. But instead, the plane crashed into Brush Mountain near Roanoke, Virginia, killing all on board. Audie Murphy was just 45 years old when he died.

But during his short time on Earth, Audie Murphy seemed to have lived multiple lives before he died. He spent his childhood in poverty, achieved glory during World War II, and even became a famous Hollywood actor.

Buried with full honors at Arlington Cemetery, Murphy is remembered today as both one of America’s most decorated soldiers and as a man who stayed humble even at the height of his success.

“I’m just a friendly, sort of scrawny, freckled face kid from Texas,” Audie Murphy once said. “So how can anyone honestly expect me to maintain an air of superiority and romantic mystery?”

After this look at Audie Murphy, read about Ira Hayes, the Native American war hero who raised the flag at Iwo Jima. Then, check out the story of Erich Hartmann, Germany’s deadliest flying ace of all time.