Insane footage from the Battle of Okinawa shows just how reckless and terrifying kamikaze pilots were.

On October 25, 1944, the American soldiers stationed aboard naval ships in the Leyte Gulf saw something that no amount of training could have prepared them for. Before their eyes, over a thousand aircraft fell from the sky, crash-diving into American warships, the debris dotting the seas around them.

The American’s fought back by engaging in airborne combat and had soldiers on the ground shooting at the planes heading straight for them. All in all, the United States lost thirty-four warships, the result of roughly 1900 kamikaze aircraft crashing into them.

The term “kamikaze” means “divine wind,” fitting when you consider that the pilots considered their work the highest of all honors. As the American’s were closing in on Okinawa and Iwo Jima, as well as the Philippines, the Japanese were looking for a way to push back.

“I firmly believe that the only way to swing the war in our favor is to resort to crash-dive attacks with our planes,” Japanese naval Captain Motoharu Okamura declared. “There will be more than enough volunteers for this chance to save our country.” 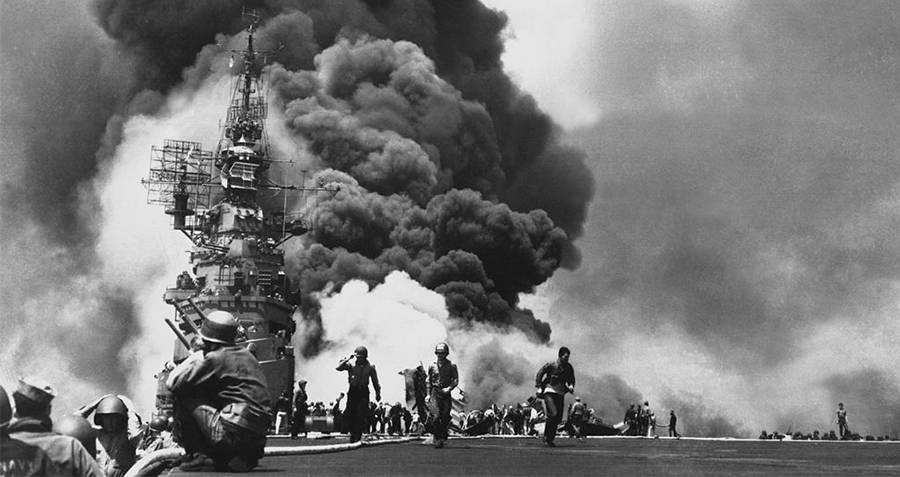 And, indeed, there were. The first kamikaze fleet had only 24 pilots, willing to throw themselves, literally, into the flames for their country. The pilots weren’t even Japan’s finest, as most of them were inexperienced pilots with little to no training.

There were no rules for the pilots, and no aim besides the naval ships. There was no hope of survival once they made an impact and by the end of the war, the Japanese had lost nearly 5,000 men to what the American’s called “inhumane warfare.”

They flew conventional aircrafts but also had specially designed planes, known as “Ohka,” that were designed for maximum devastation upon impact. The Ohka was a rocket-powered aircraft that would be carried toward its intended target on the bottom of a bomber.

The impact of the kamikazes was more than just physical. The damage itself wasn’t enough to hold off the U.S., as the navy soon captured Okinawa, Iwo Jima, and the Philippines, but the emotional impact was insurmountable. Soldiers remembered feeling a sense of horror at the fact that the kamikaze pilots had no concern for the destruction of their own lives.

Once retrieved, the bodies couldn’t be identified. Over 1,000 kamikaze pilots were buried at sea following the attack, which resulted in the highest concentration of Navy losses since Pearl Harbor.

Enjoy this article on Japanese kamikaze pilots? Next, take a look at this picture which claims to show an alive and well Amelia Earhart. Then, read about Japanese sex-slavery during World War II.