Erich Hartmann: The German World War II Pilot Who Was The Deadliest Flying Ace Of All Time 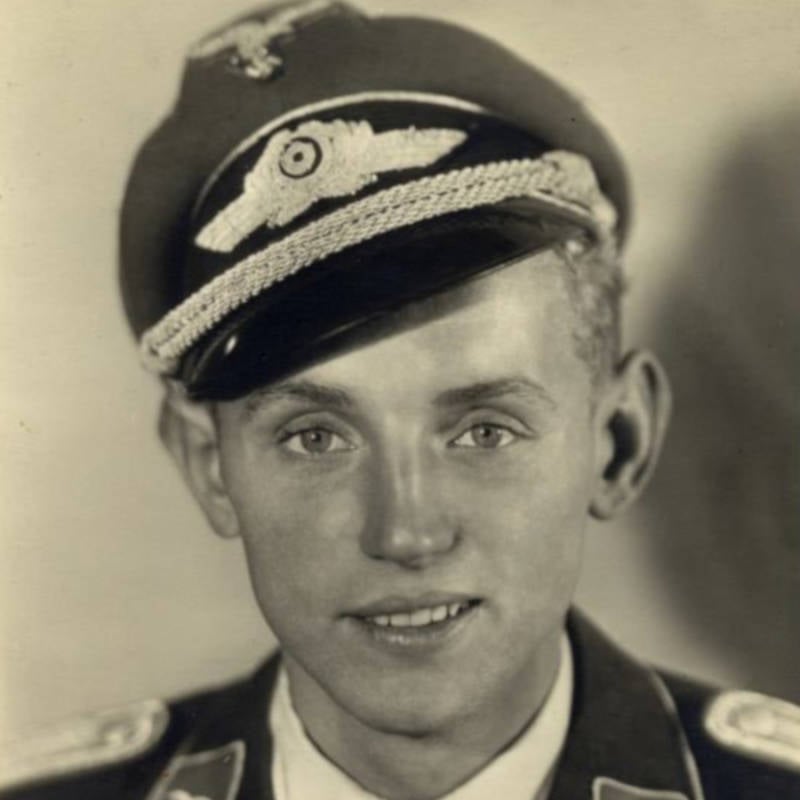 Erich Hartmann took pride in his skills as a fighter pilot for the German Luftwaffe in World War II — as well he should have. He was so feared on the Eastern Front that Soviet planes would turn around and retreat rather than face him in his formidable Messerschmitt Bf 109.

Erich Hartmann was born in Weissach, Wurttemberg on April 19, 1922, to Alfred and Elisabeth Hartmann. The family moved to China during the 1920s to avoid the economic calamity that struck Europe. But by 1928, the idyllic life of the Hartmanns had come to an end as they fled back to Germany to escape the Chinese Civil War.

Back in Germany, Elisabeth Hartmann became one of the country’s first female glider pilots. It’s from his mother that young Erich began his passion for flight. His mother was an excellent teacher. Erich received his glider pilot’s license in 1936 at just 15-years-old.

By 1939, Erich Hartmann, then 18, received a pilot’s license to fly a powered aircraft and had begun fighter pilot training. From October 1940 to October 1942, Hartmann trained on Messerschmitt Bf 109, or ME 109, aircraft. These planes were the workhorses of the Luftwaffe and were some of the most reliable and powerful fighter aircraft in the world at the time. 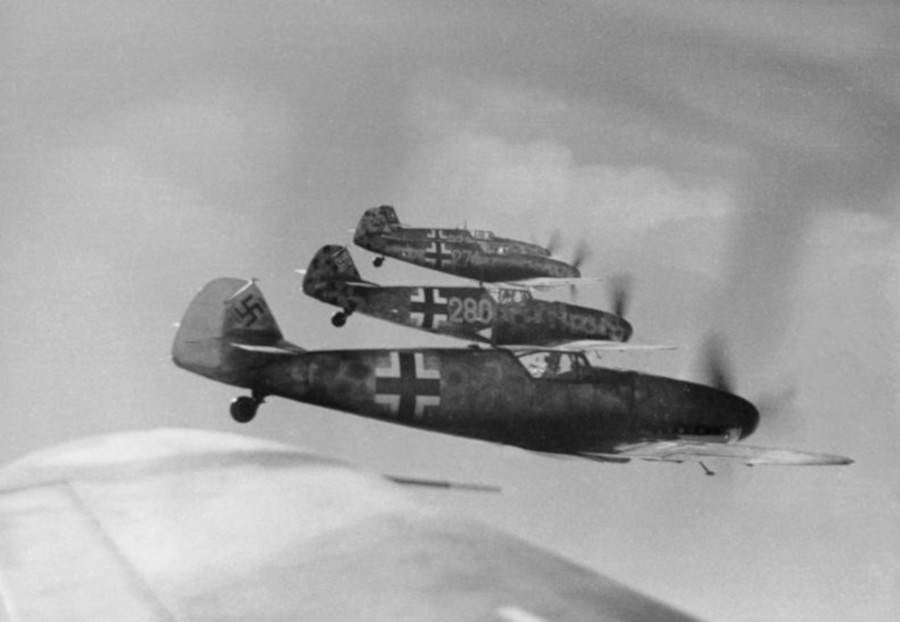 An ME 109 squadron in action during World War II.

His training was not without incident. Erich Hartmann received a mark against his record for performing aerial maneuvers over an airfield — in other words, showing off. He was confined to the ground but his recklessness actually saved his life. A comrade was killed flying that same aircraft in a training mission while Hartmann served his disciplinary suspension.

Hartmann served on the Eastern Front and his base of operations was in Maykop, Russia, near the northeastern shore of the Black Sea. His reputation as a marksman with excellent eyesight, lightning-fast reflexes, great flying instincts, and an uncanny ability to stay cool in combat put him in harm’s way time and again. But it was worth it: Hartmann proved to be a formidable flyer.

He scored two aerial kills against Soviet planes in late 1942, and emboldened by this, he had become an Ace with 11 kills by April of 1943.

The Ace was so successful because he allowed himself to get close enough to an enemy aircraft and then maneuver, tactfully, away very quickly before the crippled enemy could crash into Hartmann’s plane.

Between April and August of 1943, Hartmann downed another 40 Soviet planes.

His skill with the ground crew was just as good as in the air. Following an escort mission in August 1943, Hartmann’s plane went down because of debris from one of his kills. His plane landed behind enemy lines and the Soviets captured him.

He wasn’t a prisoner for long. Erich Hartmann feigned internal injuries, jumped his guard, and walked back to German-held territory to rejoin his unit. No wonder the Soviets nicknamed Hartmann “The Black Devil.”

By the end of that year, Hartmann amassed some 159 aerial kills. He wasn’t even halfway to his final kill total.

On May 21, 1944, Hartmann engaged American aircraft for the first time. He shot down two American P-51 Mustangs that day, and then four more on June 1. All of these kills were in German-occupied Romania as the Allies advanced towards Germany. 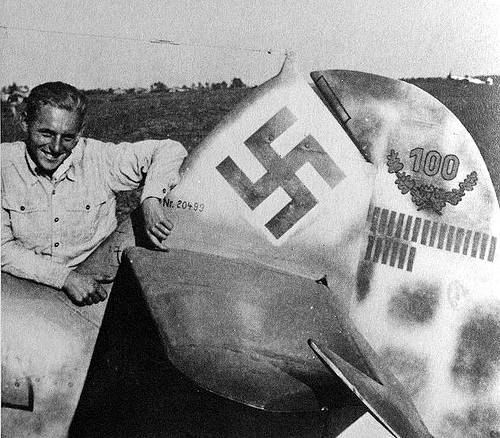 Erich Hartmann received numerous awards and citations for his kills. He received the Iron Cross, the Knight’s Cross with Oak Leaves, Swords & Diamonds, which were reserved for those of military valor and outstanding leadership. He also worked up to the rank of major and eventually became the top ace of Germany in World War II when he surpassed the previous record of Gunther Rall’s 272 kills.

Wikimedia Commons An ME 109 in modern times, and closer-up.

On May 8, 1945, as the Germans prepared to surrender to the Allies, Hartmann made one last brazen kill. Soviet troops were on the ground in Brunn, an East German town, watching an ace perform acrobatic maneuvers above them.

Suddenly, an ME 109 dove out of the sun. Its 20-mm machine gun cannons made quick work of the Yakovlev Yak-9’s fuselage. The enemy plane crashed in a molten heap of burning slag. It was Hartmann’s final kill and it was in front of stunned enemy onlookers in the Soviet infantry.

In all, Erich Hartmann amassed 352 kills over 30 months and flew 1,404 combat missions, and then some. Most of these kills happened on the Eastern Front against the Soviet Union.

Hartmann was captured after the war by American forces. He was turned over to the Soviets where he spent 10 years as a prisoner of war. The Soviets put him on trial, but it was a show trial at best. The former enemies of Germany wanted to show the world that they captured the greatest aerial ace of all-time. Hartmann was beaten and interrogated while in prison, and sentenced to 25 years of hard labor.

But West German authorities arranged for Hartmann’s release in 1955. Upon his return to Germany, Hartmann wasn’t necessarily welcomed back as a hero, as was the case for many former German soldiers.

Erich Hartmann rose to the rank of colonel in the West German Bundesluftwaffe after rejoining the military. The world’s most prolific flying ace was in charge of West Germany’s first all-jet fighter squadron, a group of Canadair F-86 Sabres. By the 1960s, West Germany purchased Lockheed F-104 Starfighters for the air force’s main jet. However, Hartmann disapproved of the choice. He felt the planes were unsafe.

More than 100 West German pilots lost their lives in training accidents in F-104s. But as Hartmann became increasingly critical of his superior officers, he was forced to retire early from military service in 1970.

Erich Hartmann continued to fly until 1980 as a trainer and flight instructor in Bonn. He died on September 20, 1993, in Weil im Schönbuch, Germany.

Of his accomplishments, Hartmann said he crash-landed 16 times but he was never once shot down. All of his crashes were due to mechanical failures or debris from aircraft shot while in flight.

In his last interview before his death, Erich Hartmann explained the tactics employed by German pilots. He said that he and his wingmen amassed so many kills because they would fly at higher elevations than enemy squadrons and fly out of the sun. The bright sun would then shield German planes from the sights of enemy pilots. Hartmann would then rely on quick sweeps out of the sun to take on enemy squadrons. This was before the time of radar on airplanes, so pilots flew by sight.

Erich Hartmann continued to say that his proudest achievement wasn’t his 352 kills. It was that he never lost a wingman.

As far as why German pilots amassed so many aerial victories compared to Allies, there were two reasons.

One is that German pilots were in short supply. Whereas American pilots could rest in between missions when another squadron took off, German commanders called pilots into service time and again. Another reason for the high kills counts was due to the nature of the flights. Allied planes came from far-away bases into German territory, but German planes often took off from bases and could engage the enemy in few minutes rather than flying around for hours.

But no matter how history looks at Hartmann’s numbers, he was one of the most feared fighter pilots of World War II. His record will likely never be broken.