Aum Shinrikyo was founded on the basis of meditation and spiritual guidance, but before long, it was a group determined to jump-start the apocalypse. 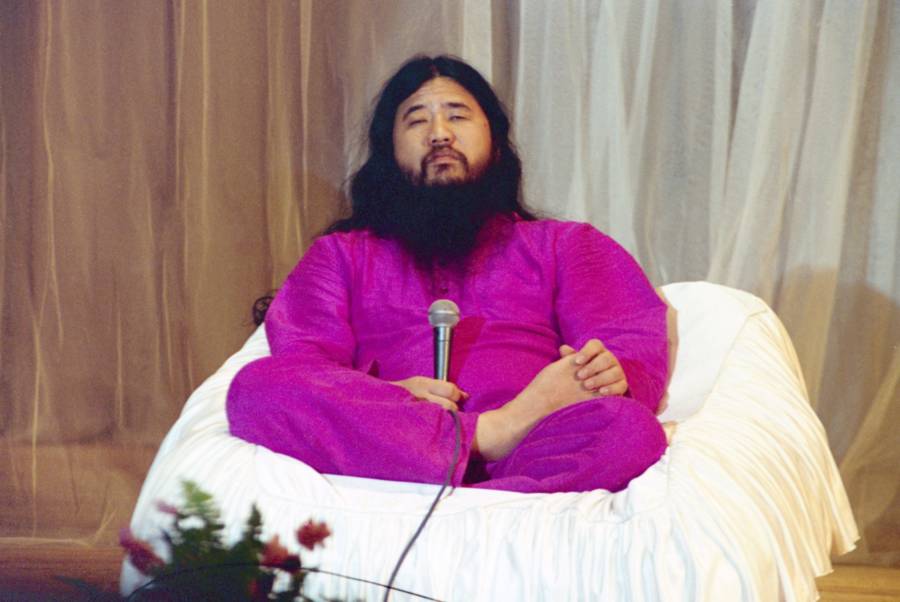 Wojtek Laski/Getty ImagesShoko Asahara, leader of the cult group Aum Shinrikyo, during a visit to Moscow, Russia, on February 17, 1994.

In 1984, the Japanese group Aum Shinrikyo was founded as a simple yoga class.

Just 11 years later, it carried out a devastating sarin gas attack on a Tokyo subway and made a name for itself as one of the world’s most frightening doomsday cults.

Shoko Asahara And The Start Of Aum Shinrikyo

The man who turned a yoga class into murderers came from humble beginnings.

Shoko Asahara, born Chizuo Matsumoto, grew up in a poor family of tatami mat makers. He lost much of his sight to infantile glaucoma as a child and was sent to a school for the blind.

On his graduation in 1977, he left his classmates with few nice things to say about him. Peers remember him as a bully who wanted money and had few scruples about how he obtained it.

After leaving school, he began selling herbal remedies, a career that proved inadequate to support his wife and growing family. He eventually strayed into more questionable business practices and, in 1981, was found guilty of practicing pharmacology without a license.

That’s when things took a turn toward the mystical.

Asahara became deeply interested in meditation and ancient religious philosophy. He mixed Hindu, Buddhist, and Christian teachings with the prophecies of Nostradamus and began to promulgate his beliefs in the yoga and meditation sessions he taught.

What started in 1984 as a class became in 1987 the group Aum Shinrikyo, which gained official recognition as a religious organization in Japan just two years later.

In books and frequent appearances on talk shows, Asahara promised members health and a better life through spirituality, focus, and positive thinking — a message that garnered him an increasingly enthusiastic following. 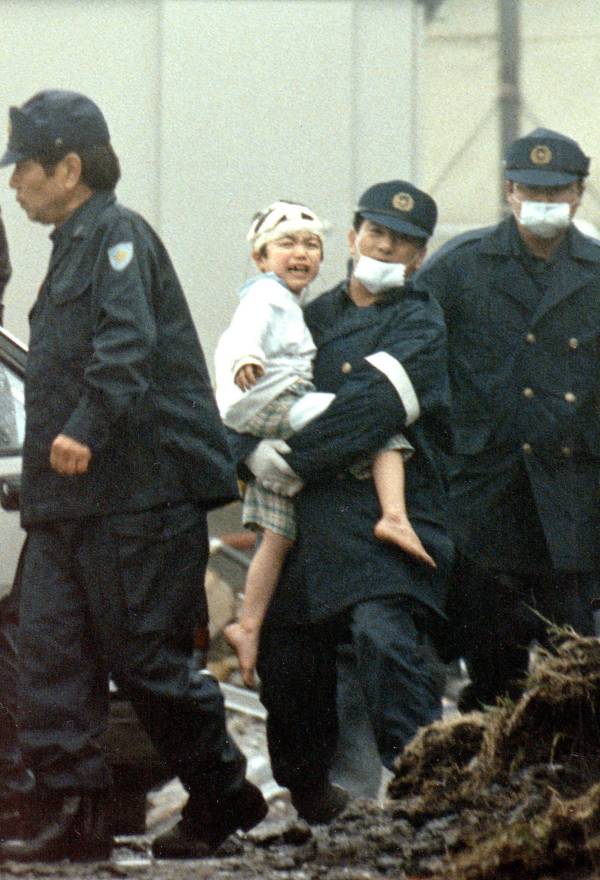 AFP/Getty ImagesA child of a member of the secretive sect Aum Shinrikyo is taken from a facility by police.

As time went on, Asahara’s claims grew bolder. He began to refer to himself as the “ultimate savior” and the lamb of Christ. He offered salvation and promised to take on the world’s sins while sharing his spiritual power and wisdom with followers.

But his lofty vision was mixed with more sinister messages. Young people, he said, should shun parents because parents were part of the present life and not the future.

It was an effective way to cut youthful followers off from more reasonable counsel, and it worked. Members developed strong bonds with each other by tapping into the anti-parent rhetoric and lost contact with their families.

His teachings also found a surprising foothold in the country among young academics and college students, who felt the cult’s ideas were progressive and a relief after years of high-pressure academic competition.

They stuck with it, determined to belong even as the group’s emphasis on physical endurance and punishment began to take a toll. Members attended “madness camp,” a ten-day summit designed to test the limits of their strength.

These aspects of cult life were shrouded in secrecy, but some who escaped the cult report undergoing shock-therapy and taking hallucinogenic drugs. 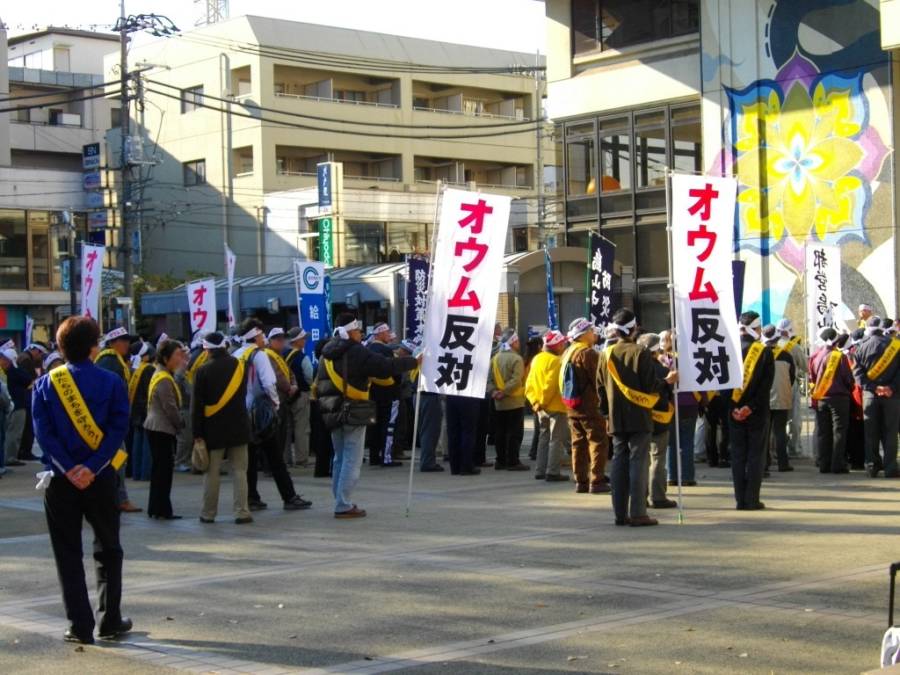 Wikimedia CommonsHorrified parents began to campaign against Aum Shinrikyo, claiming that the cult was brainwashing their children. Some continue to protest the group’s remaining offshoots to this day.

Rumors began to circulate. The anti-cult lawyer who was causing Aum Shinrikyo trouble mysteriously disappeared with his family and was never seen alive again. Some whispered that people who wanted to leave the group were being held against their will and forced to sign over substantial sums of money.

Others were dead, killed when they announced their intention to withdraw from the cult.

But Aum Shinrikyo continued to grow. By the early 1990s, the group had amassed some 10,000 members in Japan and several thousand around the world, notably in Russia.

The deadliest aspect of Asahara’s philosophy was his conviction that the apocalypse was near at hand. The guru believed that only initiates of Aum Shrinrikyo would survive the end of the world — and to hasten a future where only the devout inhabited the earth, they sought to bring it about themselves.

The cult tried to gain a foothold in Japanese politics, hoping to wield influence in the government, but after several elections failed to produce the desired results, they abandoned the scheme.

In response, the group began to amass weapons, mostly from Russia, and run an illegal narcotics trade to earn money beyond its donations from members. The proceeds went to a plant that the cult told the outside world was for printing the group’s materials.

In reality, the facility produced the Nazi-era nerve gas known as sarin. 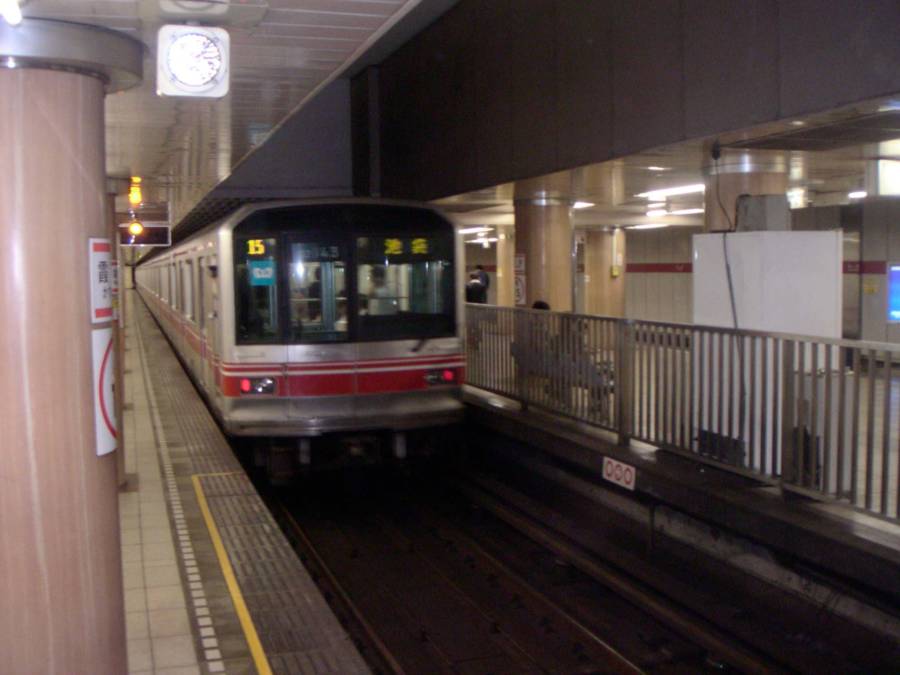 The plant wasn’t the group’s first attempt to poison the city. In 1993, they sprayed an anthrax-infected liquid from the roof of their building in Tokyo; people in the area reported a pervasive nasty stench, but nobody contracted anthrax or was otherwise injured.

Undaunted, they struck again the following year. Initial experiments with sarin gas had proved successful, so they focused their attention on a neighborhood where several judges who were predicted to rule against the cult in a land dispute resided.

Eight died, 500 were injured, and the cult was never suspected. 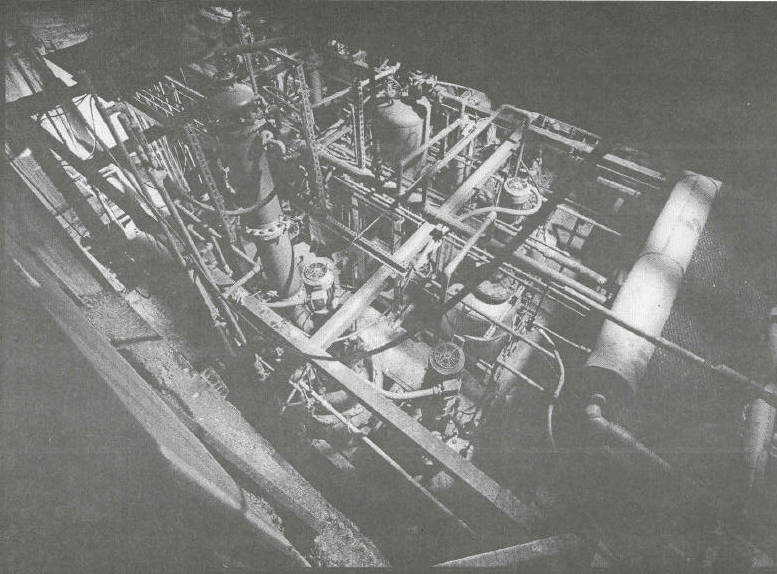 Several more citizens who were inconveniencing Aum Shinrikyo died of mysterious symptoms, but since no one knew the group was manufacturing deadly chemicals, Asahara and his followers escaped detection.

That is, until March 20, 1995, when members of the group boarded a subway train at rush hour in Tokyo while carrying concealed bags of sarin gas.

The cult members punctured the bags with the tips of their umbrellas and walked off the train. Inside the subway, 13 people died and 5,500 were injured. Many of the injured still deal with the aftereffects to this day. 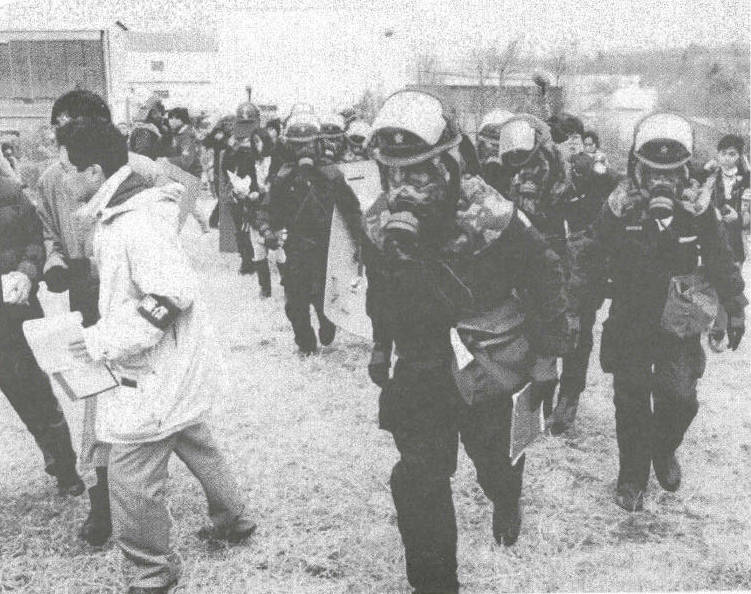 At last police eyes turned to the cult. In the days following the attack, the group’s compounds were raided. Police uncovered enough biological weapons to kill millions and plans to target other mass transit systems, including New York’s subway.

But the raids didn’t put an end to the cult’s activities. Several more nearly fatal attacks on commuters were stopped in the nick of time.

On May 16, authorities arrested Asahara. A judge handed down a death sentence that Asahara would spend years unsuccessfully appealing. He was finally executed on July 6, 2018, along with six other cult members.

A victim of the Tokyo sarin attacks remembers the incident and Asahara’s daughter reflects on his trial.

Despite The Horrors Of The Past, Aum Shinrikyo Lives On 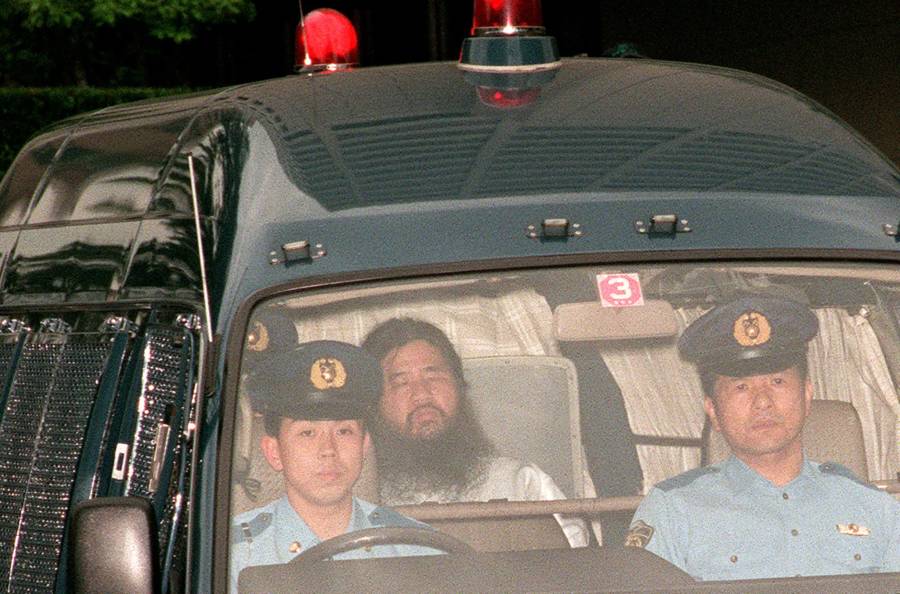 In the years since the Tokyo attack, former Aum Shinrikyo followers have spoken out about their experiences and written books about life inside the cult. Asahara dealt with disobedience harshly, torturing and sometimes killing those who failed to follow party line.

The cult also resorted to kidnapping to influence its members. Anyone who tried to leave the group faced torture or death.

Though the group’s membership has waned under public pressure, infighting, and government crackdowns, it still survives — albeit with a new name. In 2000, the group rechristened itself “Aleph.” Aleph further splintered in 2006 and gave birth to another Aum Shinrikyo offshoot, Hikari no Wa, or “Ring of Light.”

Somehow, Aleph and Hikari no Wa still have members today. Many of them are in Eastern Europe and Russia, where Aum Shinrikyo’s former followers joined the new groups. Though Asahara is gone, his philosophy lives on — and the world keeps a wary eye on its disciples.

After learning about Aum Shinrikyo, check out these five insane cults from around the world that are still active today. Then, read about the cult of Rajneesh, the group that carried out the largest bioterror attack in American history.