‘I Shall Eat You Up’: Inside The Terrifying Legend Of The Cannibalistic Baba Yaga

A fearsome witch of Slavic folklore, Baba Yaga is said to kidnap, roast, and eat children in the woods of Eastern Europe.

In a famous Russian folk tale, an evil stepmother sends her stepchildren away. As they wander the woods, the brother and sister find a strange hut that stands on chicken legs. Inside the hut, they meet a grandmother.

“If you satisfy all my wishes I shall reward you,” the grandmother declares, according to Folk Tales From the Russian. “If not, I shall eat you up.”

This grandmother, known as Baba Yaga, may remind some of another old woman who lives in a forest and eats children. Indeed, Baba Yaga’s story has echoes of Hansel and Gretel, with a Slavic twist. But some think that this character is even scarier than the villain from Grimms’ Fairy Tales.

However, others claim that this legendary witch is more complex, especially since she’s been featured in numerous different stories in different ways. This is her terrifying — and thought-provoking — history.

Who Is Baba Yaga? 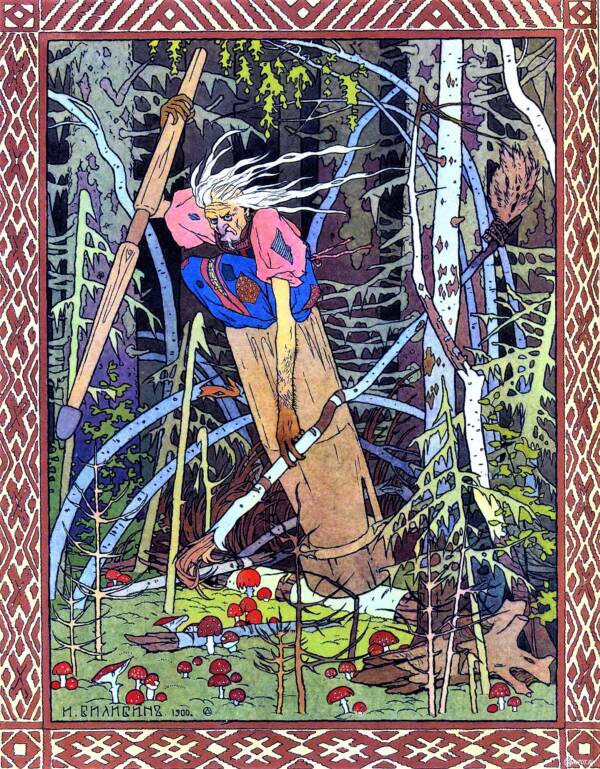 Ivan Bilibin/Wikimedia CommonsBaba Yaga is said to be a witch with magical powers.

According to legends dating back to at least the mid-18th century, Baba Yaga is a witch who resides in the forest. She usually uses a magical mortar and pestle for transportation, but sometimes flies around on a broom.

Baba Yaga’s house, which sits in the darkest corner of the woods, stands atop chicken legs. A rooster head sometimes pokes up from the roof. And the witch protects her hut with a fence built from human bones.

Like many other legendary witches, Baba Yaga enjoys roasting and eating her victims in her house, where she keeps an enormous oven.

Baba Yaga is said to be hideously ugly. She is bony and frail, with a nose so long it hits the ceiling when she lies down to sleep. Some call her “the bony one.” Others claim her teeth are made from iron. Sometimes, she’s even portrayed as a trio of three evil sisters.

The witch is also said to wield powerful magic. She commands a flock of black geese who search the woods for children. Boys and girls who ignore their mothers’ warnings while wandering too far into the forest might find themselves snatched up by the geese and carried back to the witch’s oven.

The Complexities Of A “Grandmother Witch” 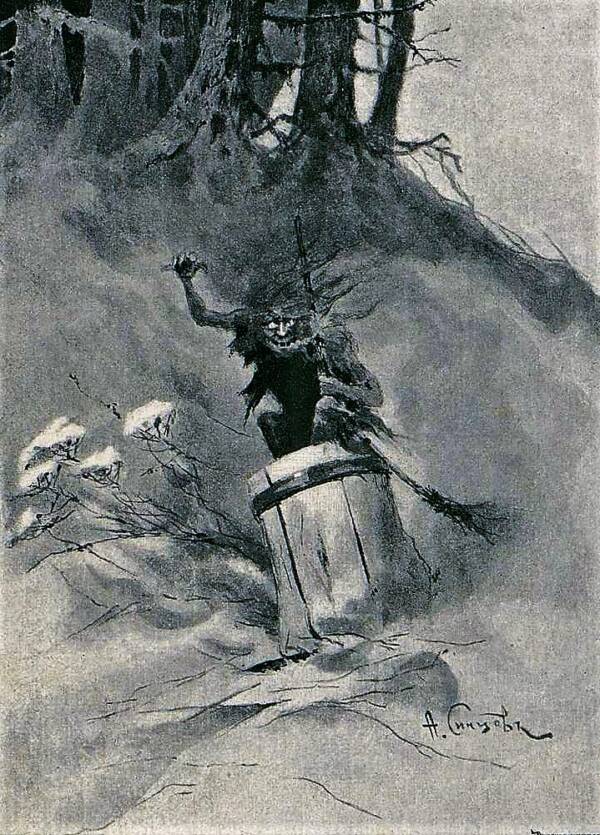 V. A. Gatsuk/Wikimedia CommonsAn 1894 edition of Tales of the Russian People included this image of Baba Yaga.

There’s no question that Baba Yaga is a fearsome figure in Slavic folklore. But she also sometimes acts as a fairy godmother — with a dash of evil.

In some stories, she helps the hero. Though she is still portrayed as a crone, she shows flashes of maternal instinct. Sometimes, she’s even likened to Mother Nature — a powerful force that can seem harsh and capricious.

According to the World History Encyclopedia, Baba Yaga shares several characteristics with an early Slavic goddess of death. Called Iagaia Baba, the underworld goddess sat atop an iron mortar and carried a pestle made from the same material. Some Slavs dedicated blood sacrifices to the goddess.

Because of this, many people believe that Baba Yaga has evil origins. One tale even claims that the Devil boiled 12 evil women in a cauldron to create an essence of evil. After the Devil spat in the cauldron, Baba Yaga burst out. But others argue that her positive portrayal in some stories — especially where she helps young visitors — is a sign that there’s some good in her.

Still, the crone’s name does serve as a warning of sorts. In Old Russian, baba meant a sorceress or someone who could tell the future. Midwives were also called baba. Today, the word usually refers to a grandmother.

“Yaga” has more mysterious origins. Some claim that it means witch or evil woman. Others liken it to the word for snake. 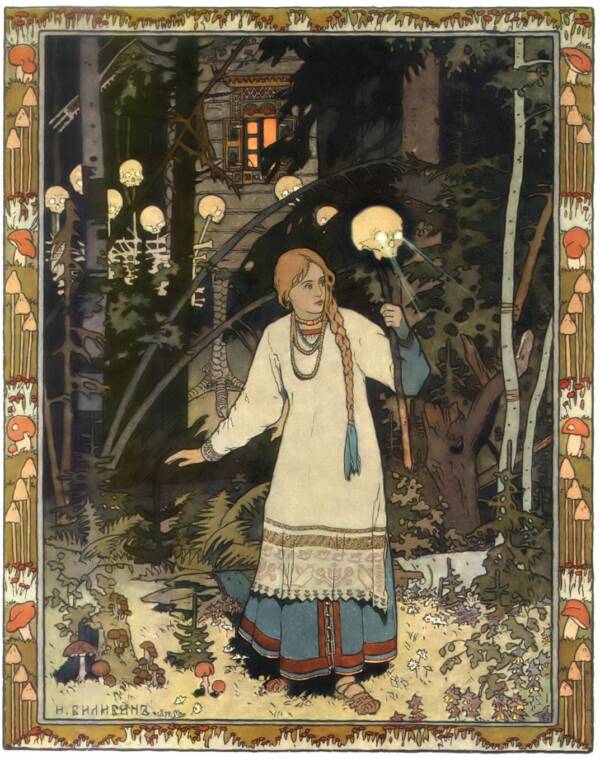 The folk tale of “Vasilisa the Beautiful” is a unique portrayal of Baba Yaga, as it shows her initially plotting against a young visitor and yet still helping her by the end of the story. In this legend, a stepdaughter named Vasilisa is sent into the woods by her wicked stepmother to find fire for her family.

While in the forest, Vasilisa encounters Baba Yaga, who offers to help Vasilisa — for the right price. The beautiful young girl must complete seemingly impossible tasks, like separating all of the black bits from a large bag of millet seeds in a single night. If she fails, she could be killed.

With the threat of being roasted and eaten by the witch, Vasilisa completes the tasks — with the help of a magical doll. She then successfully leaves with the fire, in the form of a burning skull from Baba Yaga’s fence.

Though Baba Yaga is not exactly depicted as a kindly grandmother in this particular story, her “gift” ultimately ends up helping Vasilisa in the long run. The fiery skull burns down Vasilisa’s house, killing the evil stepmother.

Vasilisa also finds her happy ending. She marries the tsar’s son and moves into a palace, never to be bothered by Baba Yaga or her stepmother again.

The Lasting Legacy Of Baba Yaga 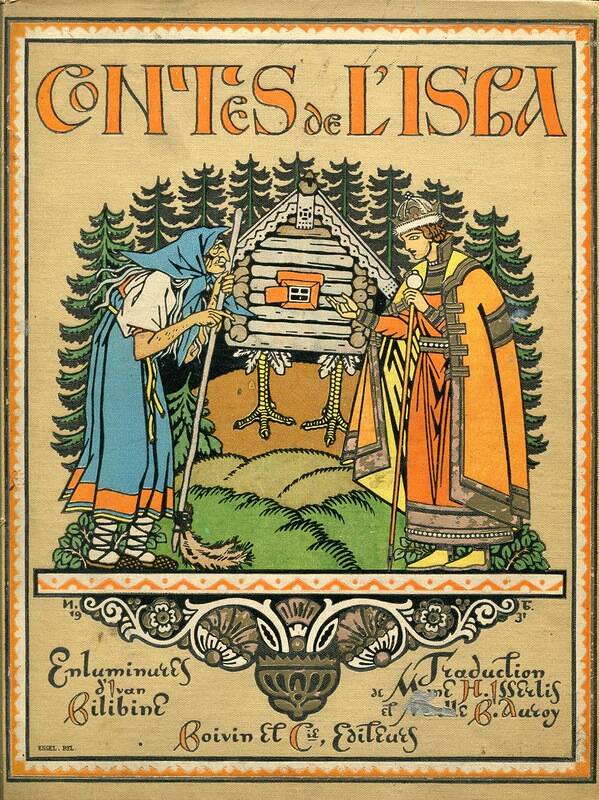 In many ways, Baba Yaga has represented the exact opposite of society’s ideal woman for centuries — and she still does to this day.

Instead of birthing and raising children, the witch eats them. She does not marry anyone or put the needs of other people above her own. Instead, Grandmother Witch is deeply selfish to the point of being evil.

Baba Yaga rejects everything that society expects from her. She even rejects society itself by living in the deep woods away from civilization.

The Slavic witch serves as a threat and reminder for those who leave the beaten path. Wander too far into the woods, and Baba Yaga will eat you.

For centuries, this legendary witch has kept countless children from straying too far — both literally and figuratively — from their families.

And unsurprisingly, young girls who learned the story of Baba Yaga were expected not to emulate the witch in any way as they got older. They were instructed to meet society’s expectations rather than reject them.

Since Baba Yaga rejects just about every societal norm in the book, this is precisely what makes her so fascinating to many people as both a villain and a mysterious fairy godmother character. But at the heart of it, she also represents an evergreen reminder for people to watch out for themselves in a dangerous world — and to not stray too far from safety.

After reading about Baba Yaga, take a look at the Mexican legend of La Llorona. Then, learn about the true story behind Hansel and Gretel.