Born in 1990, Ovidio Guzmán López was 18 when he joined his father's Sinaloa Cartel. Now, he helps produce and traffic thousands of pounds of narcotics every year. 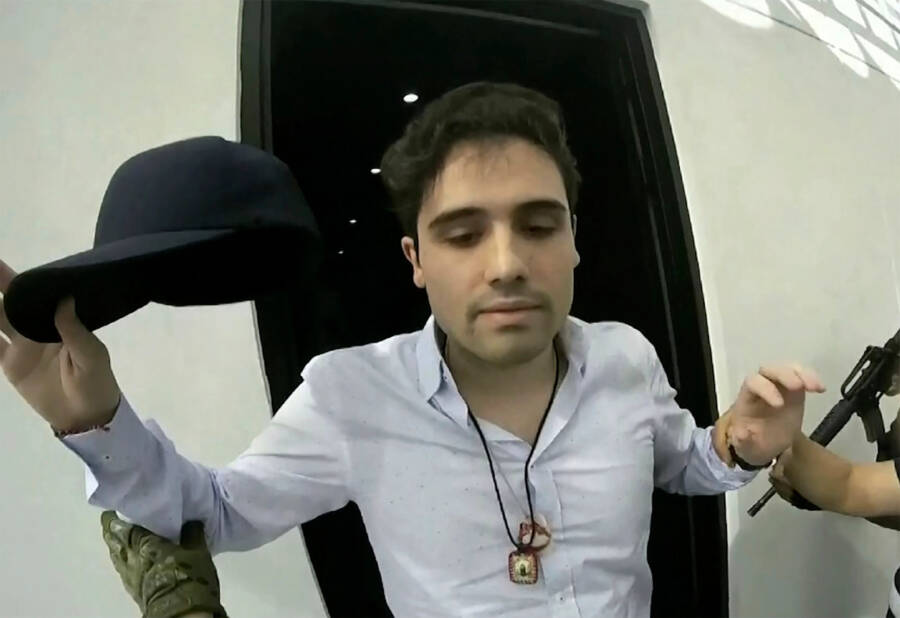 Los Angeles Times/YouTubeOvidio Guzmán López was arrested in 2019 — and released due to cartel pressure.

Since the late 1980s, the Sinaloa Cartel has been laundering money and trafficking drugs into the United States and bribing, torturing, or murdering anyone who crosses it. While its leader Joaquín “El Chapo” Guzmán was captured in 2016, his son, Ovidio Guzmán López, remains at large — but not for lack of trying.

López and his brother Iván Archivaldo Guzmán have reportedly become high-ranking members of the cartel and taken complete control of its cannabis and cocaine distribution networks. Known as “Los Chapitos,” El Chapo’s sons have even begun delving into methamphetamine — producing up to 5,000 pounds per month.

While Ovidio Guzmán López attended a private school that touted integrity as a core principle, he was a true narcotics trafficker by the time he turned 18 in 2008. And by 24, he was a high-ranking leader of the cartel.

Justice appeared to have won when the Mexican Army captured him in Culiacán on October 17, 2019. However, not even the federal government was prepared for blowback, as hundreds of heavily-armed cartel members turned the city into a war zone — and threatened to murder the families of soldiers until López was freed.

Ovidio Guzmán López was born on March 29, 1990, in Culiacán in Sinaloa, Mexico. It remains unclear how many siblings he has, as his father had four wives and fathered between 13 and 15 children. López was named after his mother Griselda López Pérez his father’s maternal grandfather, Ovidio Loera Cobret. 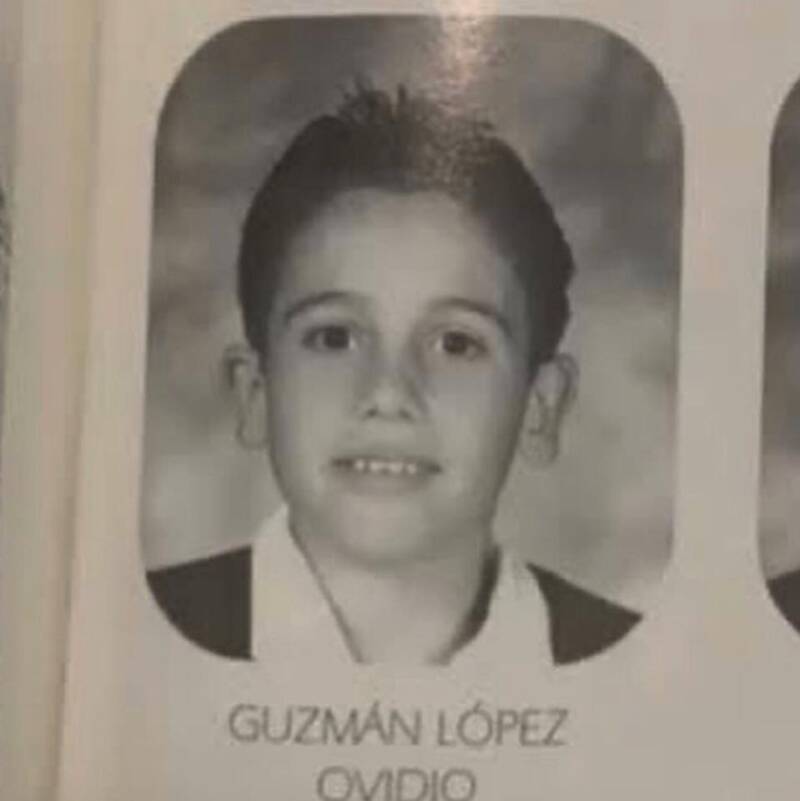 According to the Mexican newspaper Milenio, López was five years old when his parents enrolled him in Mexico City’s Center for Education and Culture Ajusco, or Ceyca School. That exclusive institution was founded on the principles of the Legionaries of Christ and prided itself in nurturing young children into men and women of honor.

López arguably never stood a chance, however, as El Chapo was sentenced to 20 years in prison for drug trafficking and bribery in 1993. At the school, everyone and their parents knew who he was and didn’t include him in activities or birthday parties.

They once even organized a Disney World trip without him, even after his mother offered to pay for everyone’s accommodations. Nicknamed “El Ratón” (The Mouse), Ovidio Guzmán López was in fourth grade when his father broke out of prison in 2001. Unfortunately, it wouldn’t be the last time.

López’s yearbook photos curiously end in the sixth grade. What he did for the rest of his childhood remains unclear, while the U.S. government believes he and his brother Iván began trafficking drugs when López turned 18.

How He Took Over The Sinaloa Cartel

In 2012, according to the BBC, Ovidio Guzmán López and Iván Archivaldo Guzmán-Salazar were blacklisted by the U.S. Treasury Department in 2012. With their American assets frozen and unable to conduct business with U.S. citizens, it appeared the walls were closing in. Their fugitive father was rearrested in 2014, only to escape yet again the following year. 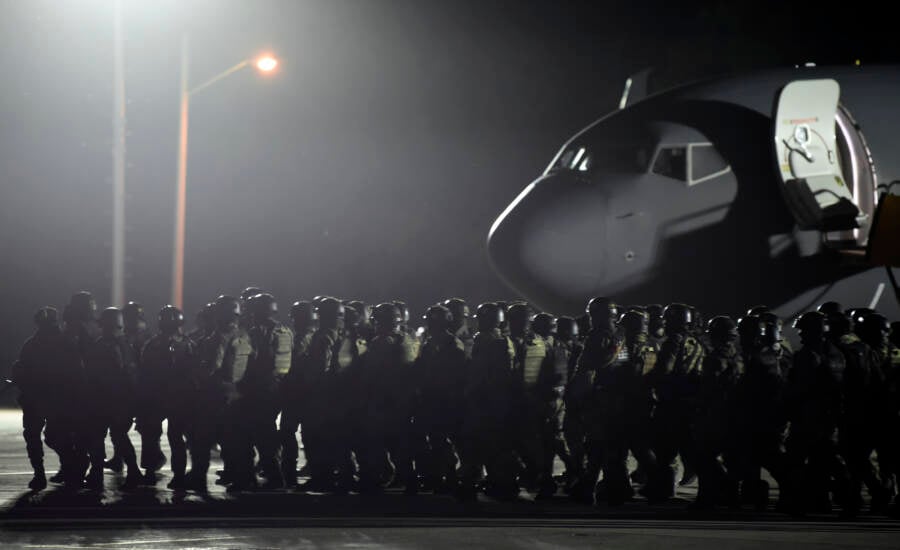 Meanwhile, López and his siblings used the profit from their cocaine and cannabis operations and reinvested it in the cartel to diversify their portfolio. Soon, they were purchasing large quantities of ephedrine, a key ingredient for making methamphetamine, from Argentina.

Then, they built 11 new labs across Sinaloa to process the drug into crystal meth and began selling the final product to criminal distributors in Mexico, Canada, and the United States.

In 2019, however, the U.S. government indicted Ovidio Guzmán López on conspiracy to distribute cocaine, methamphetamine, and cannabis for importation into the United States. While López certainly managed to forge ahead, his father’s sentencing in July signaled the end of their reign — or so it seemed.

Inside The Battle That Set Ovidio Guzmán López Free

On April 2, 2019, a Federal Grand Jury in Washington, D.C., charged Ovidio Guzmán López and his brother Iván with conspiracy to distribute more than five kilograms of cocaine, 500 grams of methamphetamine, and 1,000 kilograms of cannabis. They were to be extradited to face justice but first had to be located — and safely arrested. 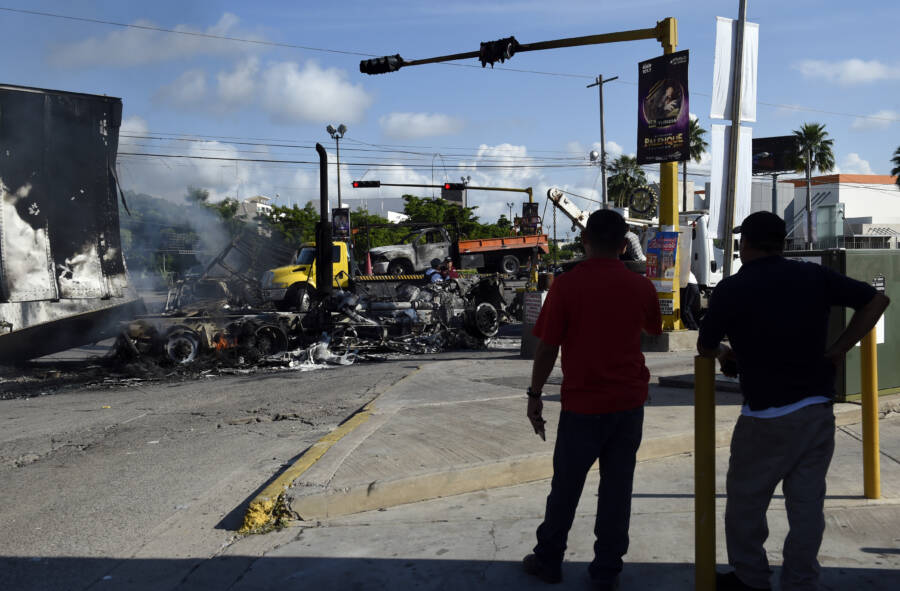 Alfredo Estrella/AFP/Getty ImagesThe cartel set cars on fire, took over the airport, and fired at civilians.

By October, Mexican security forces located both of them. And on Oct. 17, they went to arrest the brothers, starting with Iván. But, according to The New York Times Iván managed to overpower the forces and called in hundreds of members of the cartel to invade Culiacán, where López lived, and protect him.

When the Mexican forces approached López’s house, cartel members fired on them from inside. But after an intense firefight, they managed to get inside and detain López, who surrendered unarmed, according to video released of the encounter. But the battle was far from over.

Celebrations rapidly ceased when hundreds of cartel members tore through the city in trucks mounted with .50-caliber, military-grade machine guns. They set cars on fire to gridlock essential intersections, took over government buildings, and shut down the airport as dozens of imprisoned traffickers were broken out of jail.

Determined to retrieve López before his extradition, cartel members located his safe house and threatened to keep killing civilians until he was freed. Within hours, the Mexican government capitulated — and ordered its soldiers to comply. So the soldiers handed Ovidio Guzmán López a cell phone and told him to call it off.

Where Is Ovidio Guzmán López Today?

Defending his decision to release Ovidio Guzmán López, Mexican President Andrés Manuel López Obrador made the case that it was to protect citizens.

“You cannot fight fire with fire,” he said according to The Guardian. “We do not want deaths. We do not want war. The capture of a criminal cannot be worth more than the lives of people.” 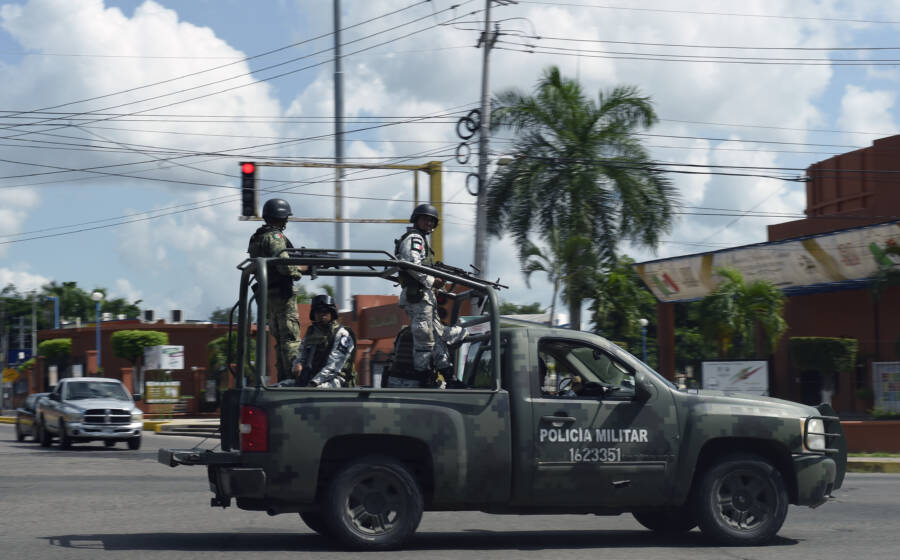 While El Chapo continues to serve a life sentence plus an additional 30 years at the ADX Florence supermax prison in Colorado, the whereabouts of Ovidio Guzmán López, Iván Archivaldo Guzmán, and Ismael Zambada García continue to baffle both Mexican and American authorities to this day.

According to KABC, the United States government has issued a $5 million reward for information leading to each of their arrests. But according to local reporting and the U.S. Department of State, López has continued to increase in popularity and brutality.

Ovidio Guzmán López has continued to run the Sinaloa Cartel’s meth operations, moving millions of dollars worth of meth every month while ordering the murders of competitors, civilians suspected of being informants, and even a famous singer who refused to perform at his wedding.

And just before Christmas 2021, he threw a large outdoor party in Culiacán, where he raffled away eight new cars, gave away bicycles and home appliances, and delivered toys for children — all stamped with his father’s initials.