Ismael "El Mayo" Zambada García took control of the Sinaloa Cartel after Joaquín Guzmán's arrest in 2014. But unlike his predecessor, El Mayo has never been to prison — and remains at large to this day.

As the former leader of the Sinaloa Cartel, Joaquín “El Chapo” Guzman was one of the most famous drug lords in the world. But during his trial in 2018, Guzmán’s attorneys claimed that he was the victim of a conspiracy by the cartel’s true leader — Ismael “El Mayo” Zambada García.

While hundreds of thousands of pages of evidence confirmed that Guzmán was indeed the head of the snake, the shadowy operations of Zambada remain largely unknown. What is clear is that El Mayo took charge of the Sinaloa Cartel after El Chapo’s arrest — and he remains at large to this day. 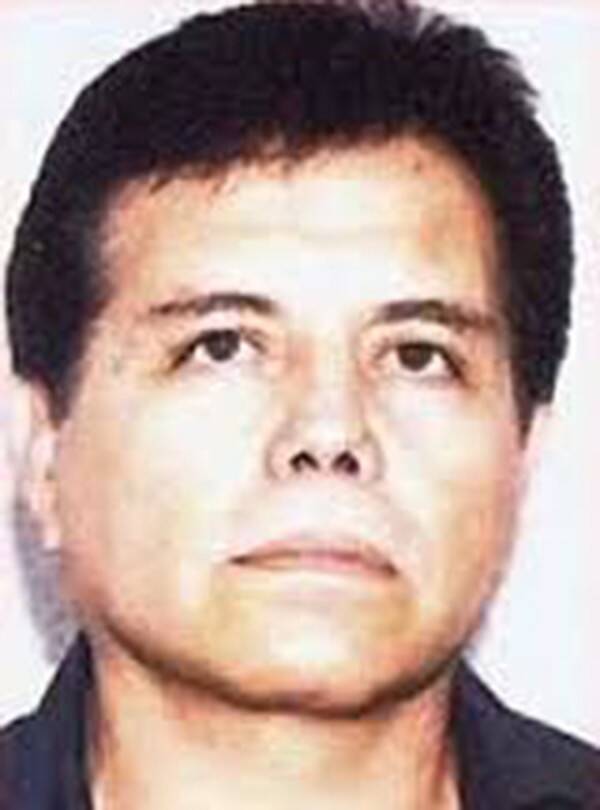 Questions have not only remained, but mounted: Who is Ismael “El Mayo” Zambada? Where is he now? And how did Zambada, who is now 72 years old, take control of a drug-trafficking empire while staying out of sight?

Who Is Ismael Zambada García?

Born in 1948 in a community called Álamo in the Sinaloa state capital of Culiacán, Mexico, Ismael Zambada García was an ambitious criminal from the start. The lowly farmer began dealing drugs when he was 16 years old.

While he started out small, he slowly worked his way up. Before long, he was linked to the Guadalajara Cartel, a major organization that dominated the drug trade during the 1980s. At one point, the cartel controlled almost all of the drug trafficking between Mexico and the United States. 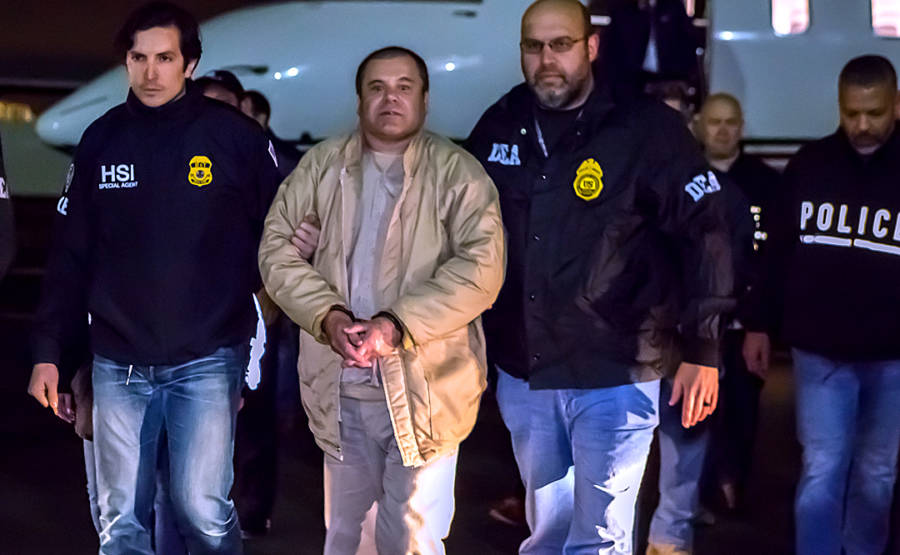 But after the capture of founder Miguel Ángel Félix Gallardo — otherwise known as El Padrino, or The Godfather — everything changed.

American officials arrested Gallardo in 1989, and sentenced him to 40 years in prison. After serving 27 years of his sentence, he was later re-sentenced to 37 years in prison in 2017 for the murder of a DEA agent.

While this was clearly a victory for law enforcement, Gallardo’s downfall also sparked violence between many of the drug lords left behind without one of their most powerful leaders. It also split the once mighty cartel into multiple contingents, perhaps the most infamous one being the Sinaloa Cartel.

Both El Chapo and El Mayo are credited with building the Sinaloa Cartel from the wreckage of the Guadalajara Cartel in the early 1990s.

FlickrMiguel Ángel Félix Gallardo was serving his 37 years in the Altiplano maximum-security prison, but was transferred to a medium-security facility in 2014 due to his declining health.

Decades of unspeakable violence, intimidation, and illegal drug trafficking around the world positioned the Sinaloa Cartel as a multi-billion dollar enterprise. Javier Valdez, the founder of the Sinaloan newspaper Riodoce, said Zambada “controls the Sinaloan police.”

And it’s clear that Ismael Zambada García has only grown more powerful with time.

The Sinaloa Cartel exports and distributes wholesale amounts of methamphetamine, marijuana, cocaine, heroin, and fentanyl to the U.S. each year, its operations running like clockwork. It maintains distribution hubs in multiple cities such as Phoenix, Los Angeles, Denver, Atlanta, and Chicago.

After receiving shipments from sources like Panama and Colombia, the cartel transports the products into the United States. The illicit drugs are usually distributed through crossing points located along Mexico’s border.

This includes trucks, submarines, and aerial transportation, as well as tunnel systems. Once the items are securely brought to the United States, the distribution centers take the next step from there.

A segment on the Mexican cartel by CBS News.

The cartel’s substantial rise in power during the 1990s can be largely attributed to Zambada’s skills at forming alliances with former members of the Guadalajara Cartel. He was rather adept at coordinating criminal efforts with equally powerful figures in the industry.

Of course, controlling territory and amassing larger pieces of the proverbial pie required a ruthless indifference toward violence — which Zambada didn’t lack. According to the U.S. State Department, he was a key member of the brutal Amado Carrillo-Fuentes Organization, or Juarez Cartel.

Zambada worked with Fuentes for years, until Fuentes died in 1997 — and Zambada absorbed his factions into the Sinaloa Cartel. This consolidation was anything but voluntary.

“From 1992 to the year 2000 the days were difficult and bloody and a stupid senseless war where many families were destroyed and with a lot of pain in their hearts,” said Rosario Niebla Cardoza, Zambada’s wife.

It certainly didn’t help matters that Zambada was playing a major leadership role in the Sinaloa Cartel during this time. 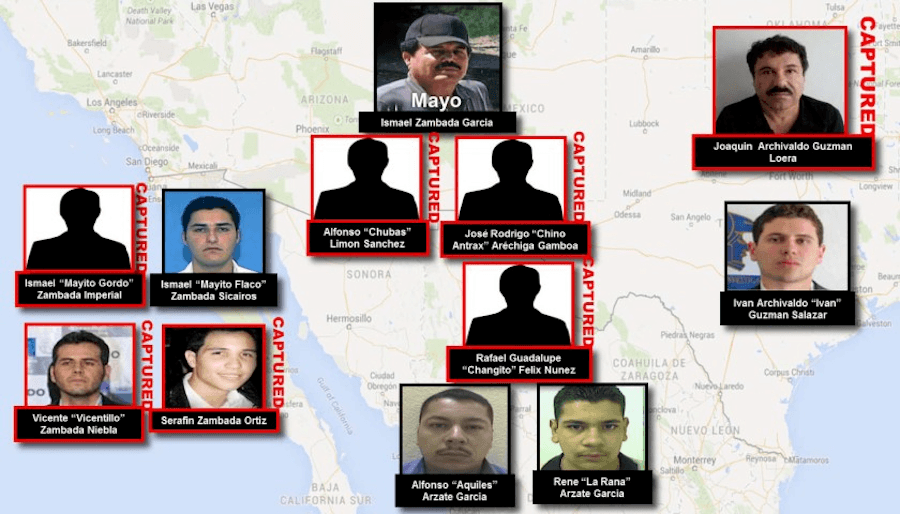 While El Chapo was jailed from 1993 to 2001, it was El Mayo who oversaw the Sinaloa Cartel’s expansion. It was also El Mayo who sent a private helicopter to El Chapo after he escaped from Puente Grande. It’s little wonder why El Mayo has often been credited with El Chapo’s rise after his first escape from prison.

“In the late 1990s, Zambada-García emerged as one of the strongest drug traffickers in Mexico, capable of transporting multi-ton quantities of cocaine and marijuana and multi-kilogram quantities of heroin,” the State Department said.

Though Mexico’s attorney general’s office indicted him in 1998 and the FBI indicted him in 2003 for his drug trafficking crimes, Zambada simply disappeared out of sight. He remains at large to this day.

A wanted man since 1998, Zambada forged ahead under El Chapo until the drug lord’s 2016 arrest — his third capture after he’d escaped from prison a second time. While El Chapo remains behind bars, El Mayo runs free. 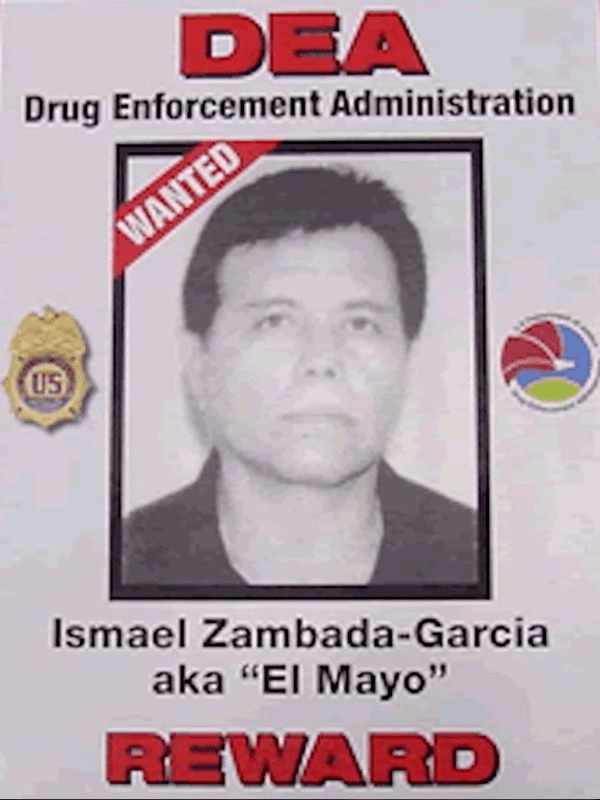 Meanwhile, the U.S. government has dangled a $5 million reward in front of anyone willing to provide information that leads to Zambada’s capture.

The 2009 U.S. indictment against Zambada explained that he “employed ‘sicarios,’ or hitmen, who carried out hundreds of acts of violence, including murders, kidnappings, tortures, and violent collections of drug debts, at their discretion.”

But in the 2000s, Mexican President Felipe Calderón primarily targeted another organization — the Tijuana Cartel. Consequently, the Sinaloa Cartel took advantage of its rival’s weakness and pushed ahead with full force to dominate its territories.

As a result, the Tijuana Cartel largely crumbled over the last decade — leaving the Sinaloa Cartel at the top of the proverbial mountain, worth an estimated $20 billion. As Zambada remains at large, it’s believed he’s still pulling the strings.

The violence that resulted was staggering, with 764 murders in Sinaloa in the first half of 2017 alone. It marked the highest homicide rate in the state in six years. Alejandro Sicairos, an editor of the local magazine Espejo, described the situation as such:

“It’s terror. The word for what is happening in Sinaloa is generalized terror. This hasn’t been the usual kind of shootout. They’re coming with everything they’ve got: high-caliber weapons, full arsenals, vehicle-mounted artillery.”

Though all are continuously vying for control, the three parties are still rumored to be running the drug trafficking empire under the umbrella of Zambada. He allegedly mediates between them, while also investing in multiple businesses in Mexico.

“He has a very diversified portfolio,” said Mike Vigil, the former head of international operations for the DEA. “Even though he’s only had maybe an elementary-school education, he’s received a Harvard-level education from some of the most prolific, knowledgeable, and astute drug lords that Mexico has ever had.”

In the end, it doesn’t look good for the 72-year-old — who reportedly suffers from diabetes and is hiding out in the mountains of Mexico’s Sinaloa region. But his exact whereabouts still remain a mystery.

“I have been up into those mountains and it’s very difficult to capture anybody,” Vigil said. “‘Mayo’ Zambada is one of the most astute drug traffickers that Mexico has ever spawned.”

Perhaps one of the biggest reasons why El Mayo has evaded capture for so long is that he keeps a very low profile. He’s only ever done one interview in 2010 with the Mexican magazine Proceso.

In the interview, he described living in fear of getting caught and revealed that at least four times the military had gotten close enough to capture him.

“I fled to the hills,” Ismael Zambada García said. “I know the foliage, the streams, the rocks, everything. They’ll only catch me if I slow down and get sloppy, like El Chapo.”

After learning about the Sinaloa Cartel leader El Mayo, learn how Pablo Escobar’s Medellín Cartel became the most ruthless one in history. Then, take a look at the crazy narco Instagram photos of Mexico’s cartels.