In Victorian Times, Women Had To Be Carried To The Beach

The Victorian era is well-known for its prudishness, but this beach day invention is crazy. 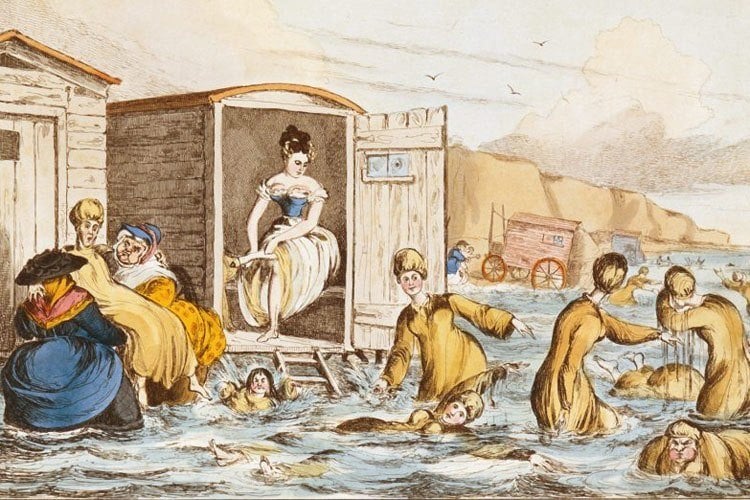 If 21st century society may be described as “overexposed,” it’s fair to qualify the 19th century as one of underexposure — and there’s perhaps no better example of that than the bathing machine.

Bathing machines actually began appearing in the 1750s, but were borne out of more practical concerns: At that time, men and women generally bathed together, and naked. Ironically, as soon as swimsuits were invented it was decided that a “proper” lady shouldn’t ever be seen wearing one.

While Victorian men were free to frolic in full view up and down the seaside, their female peers were virtual prisoners of the bathing contraption. Essentially mobile dressing rooms, these bathing machines took women to and from the shore, providing them cover while they dipped their toes in the water — in full swim dress, of course. 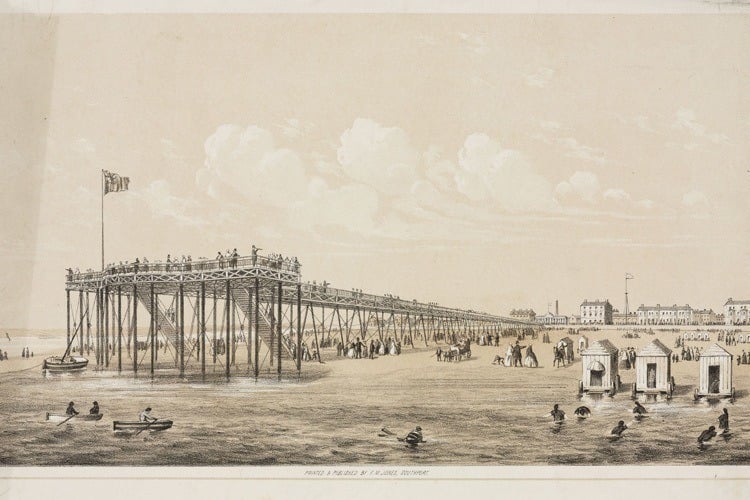 Southport Iron Pier in the 1860s. The 3,600 foot structure is considered to be the first of Britain’s pleasure piers. Photo: SSPL/Getty Images

In theory, the bathing machine experience ensured that women of the time would not be seen by onlookers and therefore maintain their modesty at the beach — in 1832, a law was passed which dictated that men and women were to be at least 60 feet apart at the beach. In reality, no walls or fences separated female swimmers from the gaze of the crowds on the beach itself, rendering the normative utility of the bathing machine rather hollow. 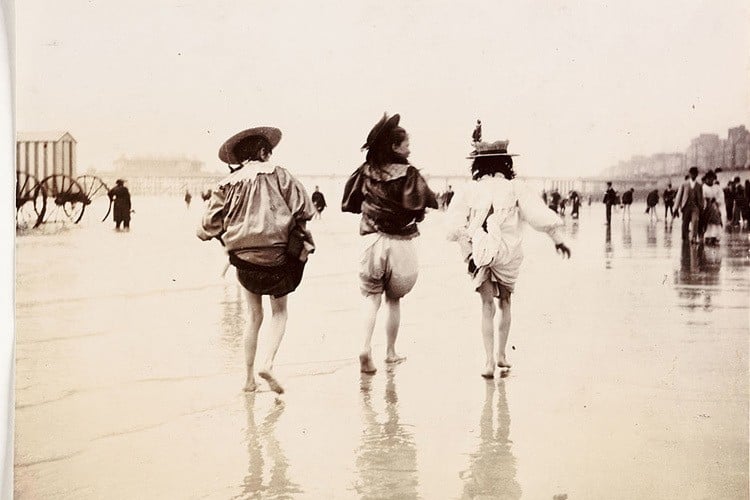 Three girls walking barefoot at the edge of the water, not knowing they were being photographed, c. 1890s. Photo: SSPL/Getty Images

The bathing machine, whose invention is historically credited to a Quaker named Benjamin Beale, consisted of little more than a box on four carriage wheels. Typically its walls were wood or canvas over a wooden frame, and advertising for products like soap and pills were often featured on the exterior. A raised box within the carriage allowed the bather to leave her clothing there, preventing it from getting wet when the machine entered the water.

Some machines were more luxurious than others. As this 1847 account has it,

“The interior is all done in snow-white enamel paint, and one-half of the floor is pierced with many holes, to allow of free drainage from wet flannels. The other half of the little room is covered with a pretty green Japanese rug. In one corner is a big-mouthed green silk bag lined with rubber. Into this the wet bathing-togs are tossed out of the way.

There are large bevel-edged mirrors let into either side of the room, and below one juts out a toilet shelf, on which is every appliance. There are pegs for towels and the bathrobe, and fixed in one corner is a little square seat that when turned up reveals a locker where clean towels, soap, perfumery, etc. are stowed. Ruffles of white muslin trimmed with lace and narrow green ribbons decorate every available space.” 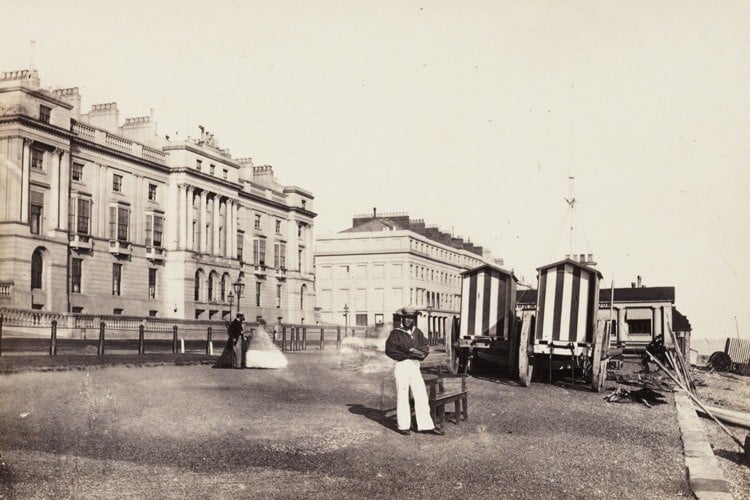 1864 photograph of the outside of the Victoria Hotel with bathing machines on the seafront. Photo: SSPL/Getty Images

With doors at both the back and front of the machine, a woman could enter the machine and change into her swimming attire in complete privacy. After what was deemed an appropriate amount of time, the bathing machine would then be brought (typically by horse — or less often with human power) to sea. 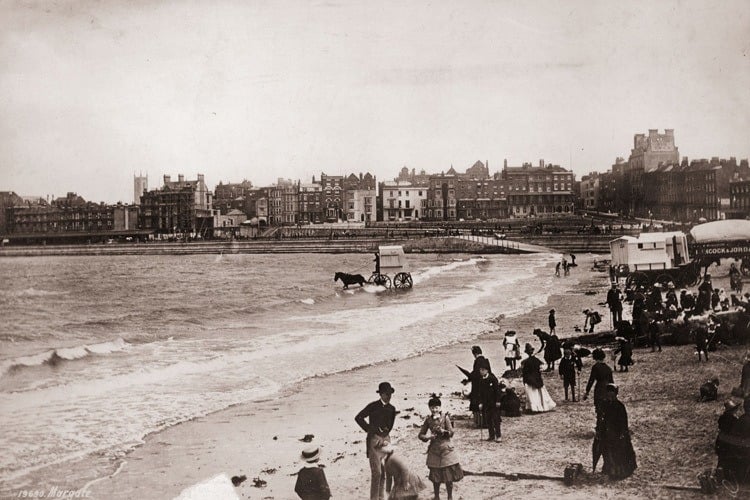 A horse pulls a bathing machine into the water at the beach at Margate in Kent. Photo: Otto Herschan/Getty Images

An attendant known as a “dipper” would help their patron exit. When the bather neared the back of the bathing machine, the dipper would essentially push her into the water. 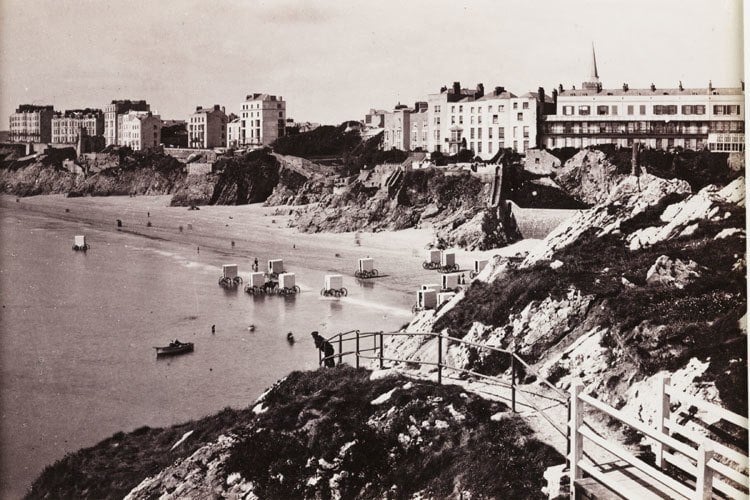 A view of the town of Tenby in Pembrokeshire, Wales taken from St. Katherine’s Rock. Photo: SSPL/Getty Images

When swim time was over, the dipper would escort the woman back into the machine. Given the additional weight a swimmer would take on as water soaked their clothing, dippers had to be quite strong. 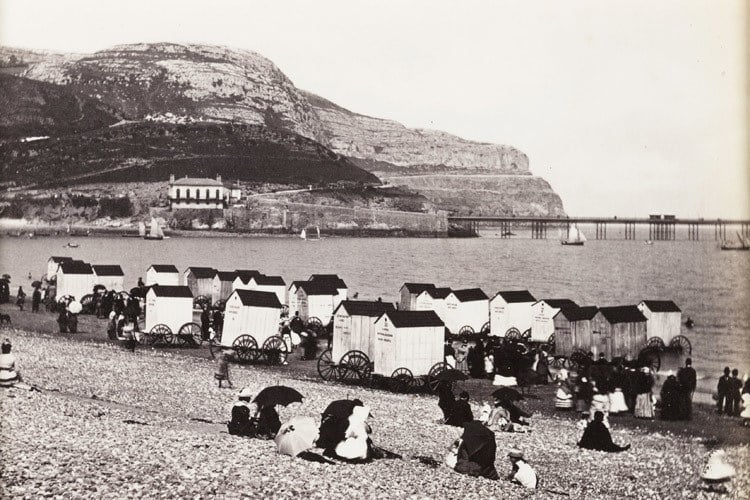 Bathing machines crowd the beach at Llandudno on the north coast of Wales. Photo: SSPL/Getty Images 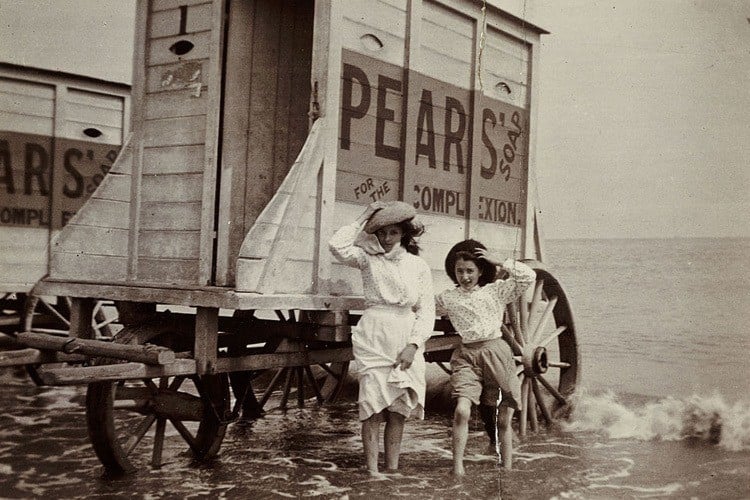 Though the Victorian age is most associated with Queen Victoria and the United Kingdom, bathing machines were also used in Germany, France, Mexico, and the United States. 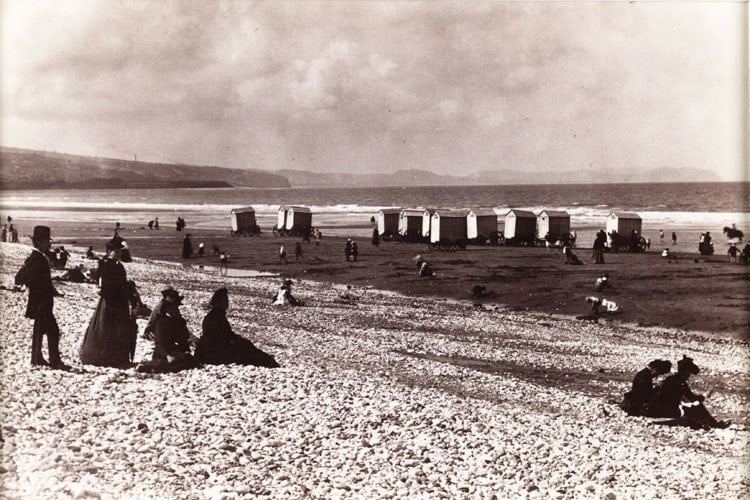 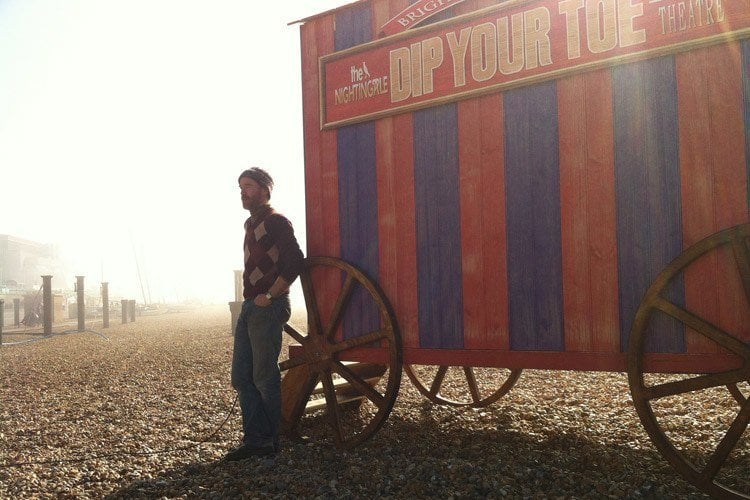 In some places, the few remaining bathing machines have taken on new life, and are used as beach huts or bathing boxes. Elsewhere, they have been re-purposed for more creative endeavors, such as the performing arts project, Dip Your Toe.

Next, check out these bizarre Victorian sex laws and learn why Victorians didn’t smile in photos.