For 30 years, the U.S. government deliberately exposed thousands of its people to life-threatening radiation. Modern scholarship reveals how far the project went. 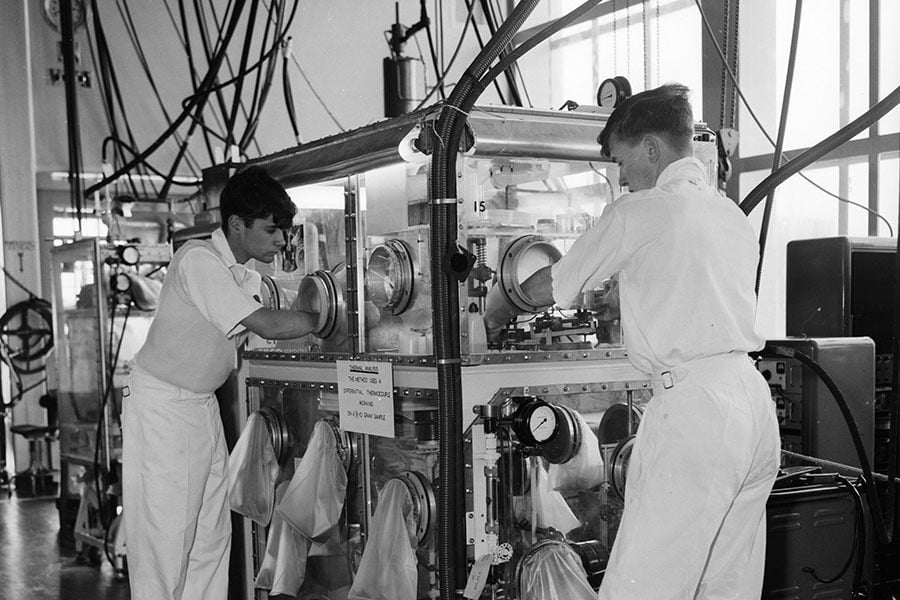 Engineers drilling and weighing a plutonium casting in one of the glove boxes at the Atomic Energy Research Establishment. Photo: Reg Birkett/Keystone/Getty Images

A poorly attended ceremony took place at the White House on October 3, 1995. Hosted by President Bill Clinton, the event marked the official receipt of the final report from a presidential advisory committee he had ordered into existence the year before.

The committee was to investigate the U.S. government’s secret program to expose human test subjects to radiation without their knowledge or informed consent.

The findings were chilling. At least 30 programs, beginning in 1945, saw government scientists knowingly exposing American citizens to life-altering levels of radiation, sometimes by directly injecting plutonium into their bloodstreams, in order to develop exposure data and plan for the effects of a nuclear war.

Children and pregnant mothers had been given radioactive food and drink, and soldiers had been marched over radioactive dirt at active test sites. In some cases, graves of the dead were robbed to secretly examine the remains of those killed by the studies. Virtually none of these actions were done with consent from the people involved.

Trillions of Bullets Every Second 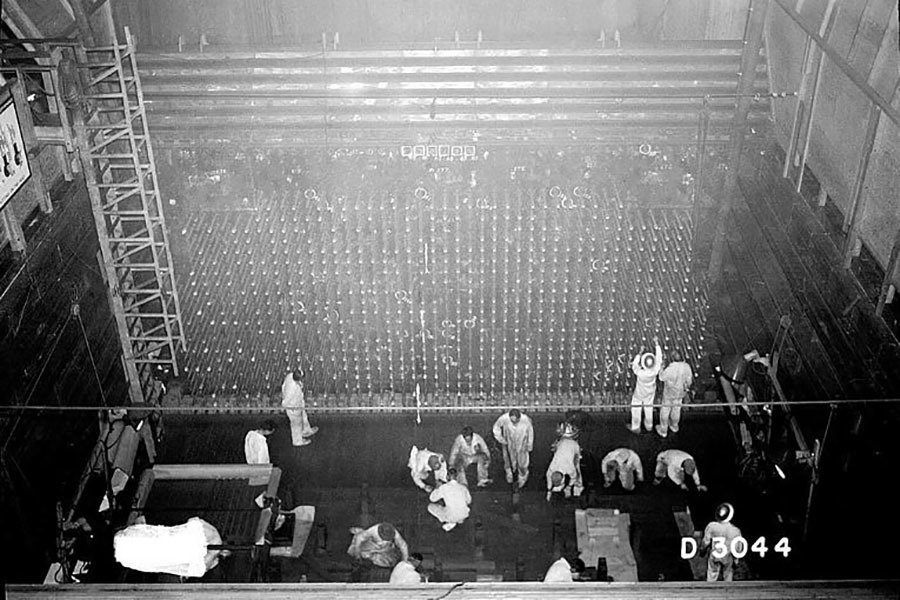 The Hanford B Reactor, the first plutonium producer, under construction. Photo: Wikimedia Commons

Plutonium was first isolated in the early 1940s, during the research that eventually grew into the Manhattan Project, which produced the world’s first atomic bombs. The metal, a byproduct of uranium fission, is basically harmless outside the body; its alpha particles travel only a short distance through the air and are easily stopped by human skin and clothes.

Inside the body, it’s a different story. If plutonium enters the body as a dissolved solution or airborne dust, the constant barrage of radiation breaks down DNA and damages the body’s cells, as if the contaminated person was being shot with trillions of tiny bullets every second from the inside.

Any exposure to plutonium raises your risk of cancer over a lifetime, and high doses cause enough damage to kill over a range of seconds to months, depending on the dose received.

On top of the radiation threat, plutonium is also a heavy metal, like lead or mercury, and is about as toxic as both. A 150-pound adult who consumes 22 mg of plutonium, or about 1/128 of a teaspoon, has a 50 percent chance of dying just from the poisoning before the radiation effects even come into play.

Manhattan Project workers, ignorant of the risks, routinely handled plutonium with their bare hands and breathed in the dust inside their closed, poorly ventilated laboratories. As Eileen Welsome, the Pulitzer Prize-winning journalist and author of The Plutonium Files told ATI:

In 1944, all the plutonium in the world could be fit on the head of a pin. But as more and more plutonium was produced, it began to get tracked about the laboratories like flour.

Nasal swabs kept coming back positive for plutonium dust, and workers’ urine and feces emitted detectable amounts of alpha radiation. Nobody in charge of the project knew how serious this problem was, and animal tests didn’t give very clear answers to how much plutonium was absorbed by the body or how quickly it could be excreted. Human test subjects were needed, and by the spring of 1945, they were available.