In the 1980s, the volatile political landscape in the Horn of Africa — borne primarily by famine and civil war between the brutal Derg regime and the people of Ethiopia — brought about the deaths of hundreds of thousands. By 1990, over 1 million refugees from the Horn of Africa would flee the region, and one area that hosted several refugee camps for the displaced was Sudan.

Photographer Frank Keillor visited some of the refugee camps in central and eastern Sudan during the mid-’80s in order to document living conditions there. While wealthy countries and NGOs shipped food and supplies to the camps, there still wasn’t enough for everyone. What was delivered was sometimes held up by red tape, and famine sometimes hit the camps.

In other ways, some camps actually offered refugees a sense of normalcy, even allowing children to go to “school.” Keillor’s photographs –- while taken at some of the seemingly better organized camps — tell that story: 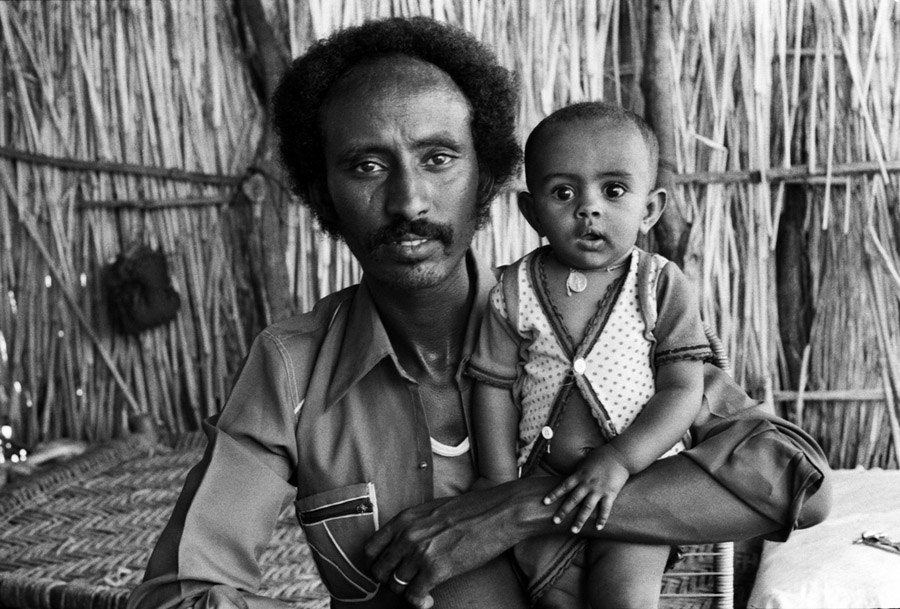 A father and son pose in a Sudanese refugee camp. Often times family members who were already too ill to travel did not make the journey to a refugee settlement. 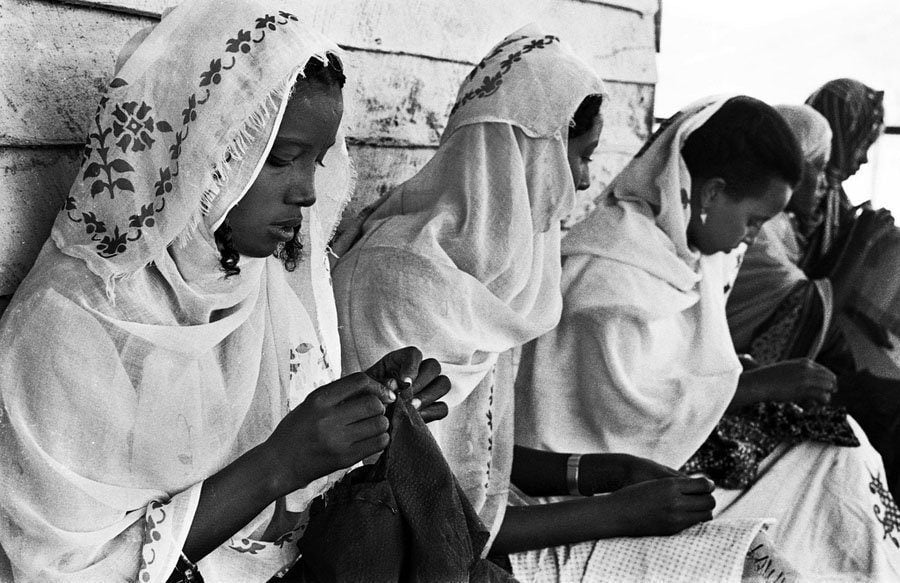 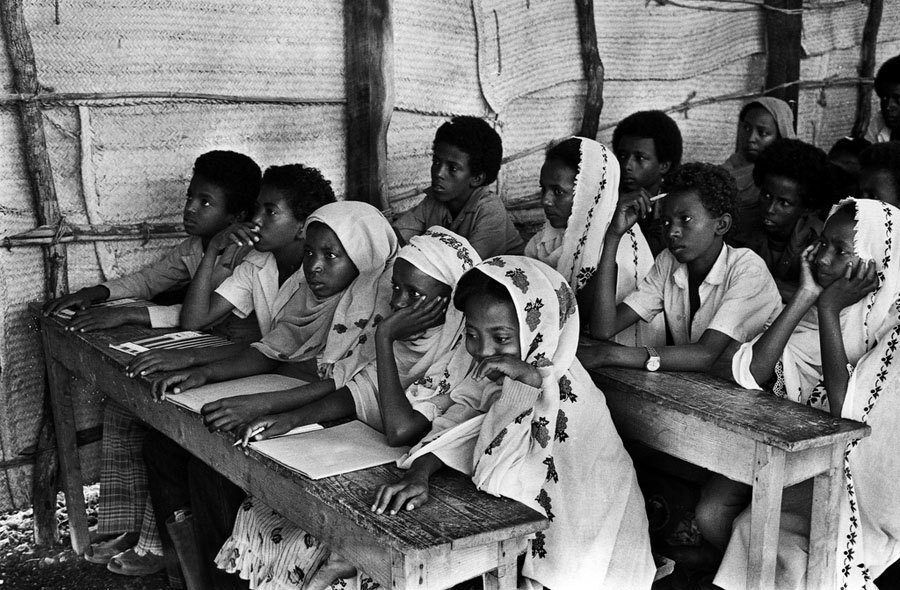 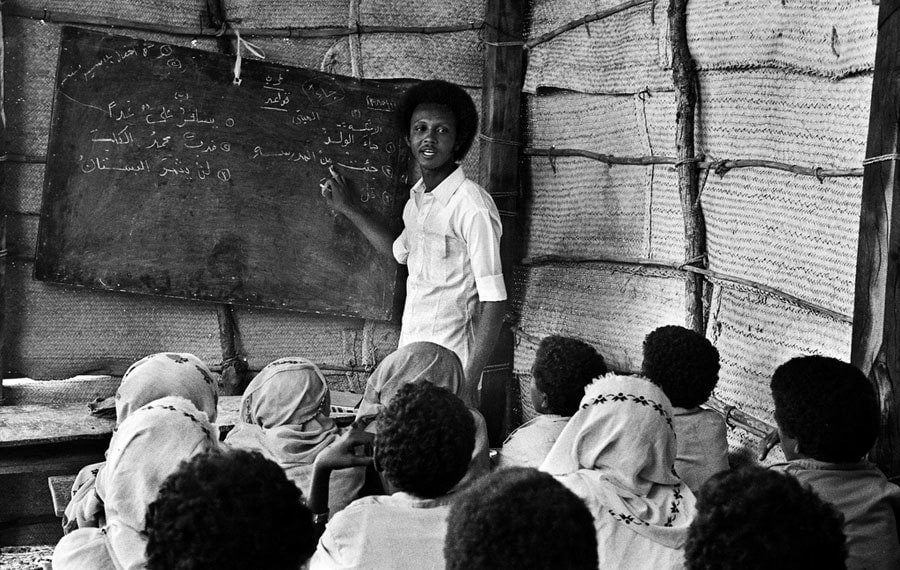 Kids listen to their instructor inside a classroom. 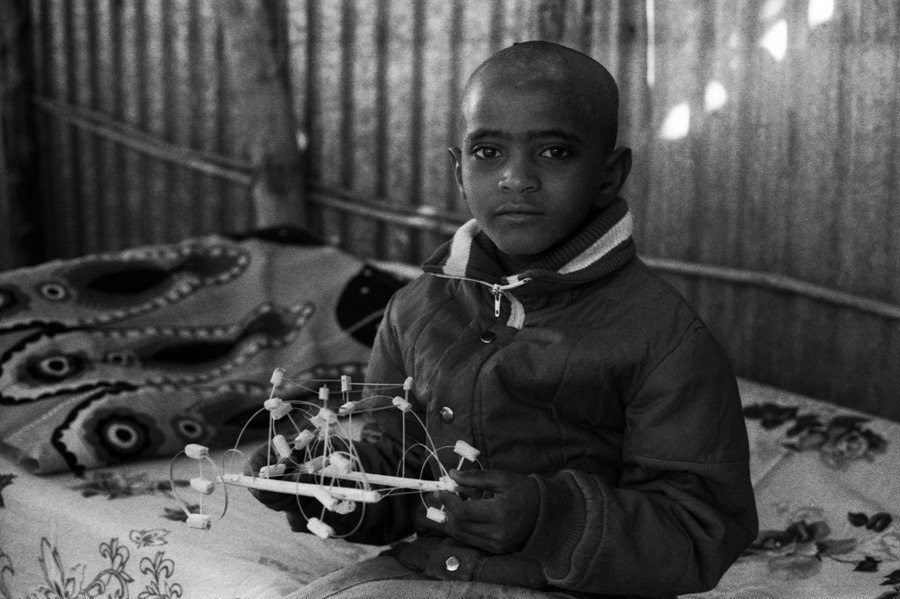 Of the children who entered the camp, a relief worker named Sister Mary said, "When the children come in, their eyes are empty and they act like zombies. After we feed them a little and care for them, a light clicks on — and the brightness in their eyes gives all of us the strength to carry on." 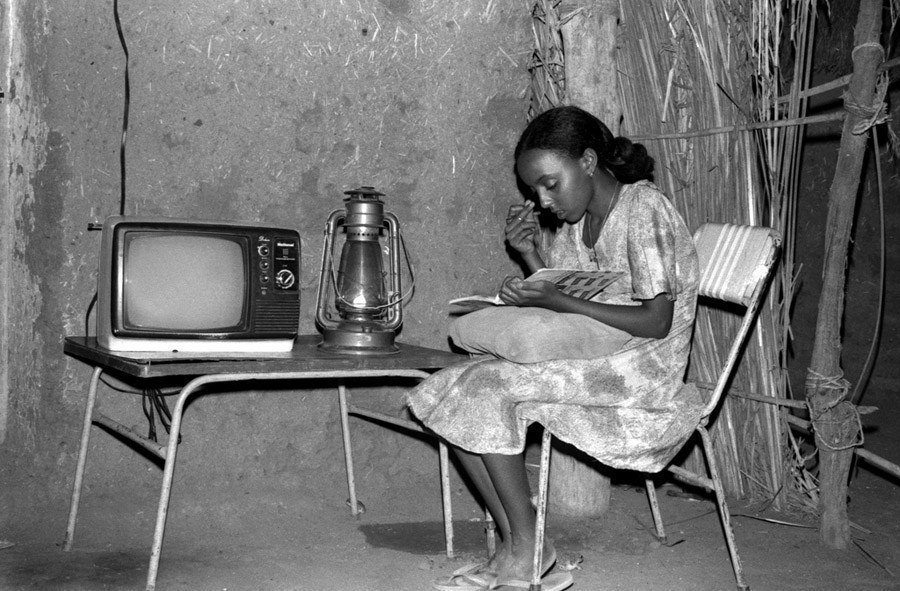 A young woman does her schoolwork by the light of a lantern. 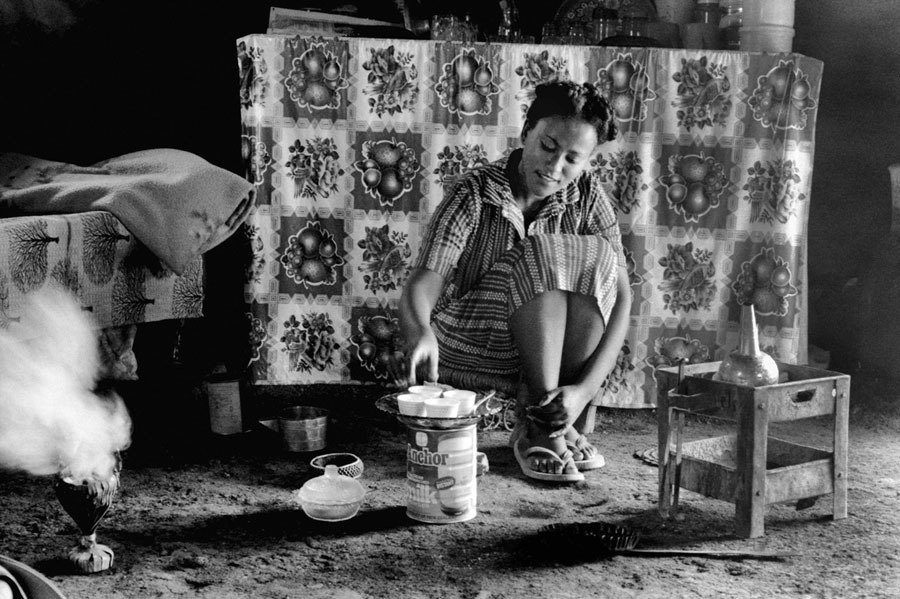 An Ethiopian woman prepares coffee, a ceremonial affair within the culture. 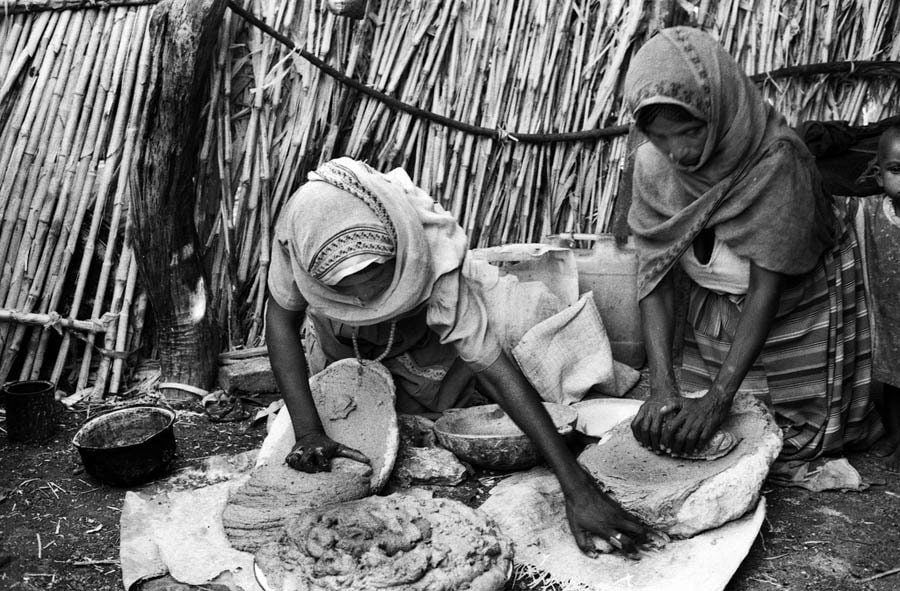 A survivor of the Ethiopian famine, Elias Kifle Maraim Beyene, remembers the release of We Are the World, meant to ameliorate the famine, and that Michael Jackson wrote the song. "We baked a special bread from it (...). When you have been through such hard times you never forget events like this. If you speak to anyone who was in Addis Ababa at that time they will all know what Michael Bread is and I know I will remember it for the rest of my life." 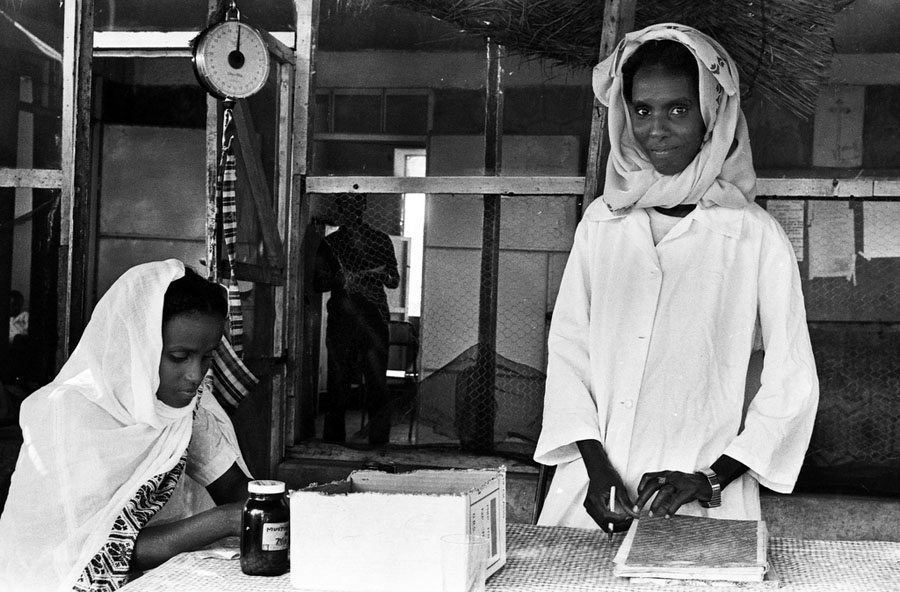 Featured above are midwives who assisted the pregnant or soon-to-become pregnant refugee women. 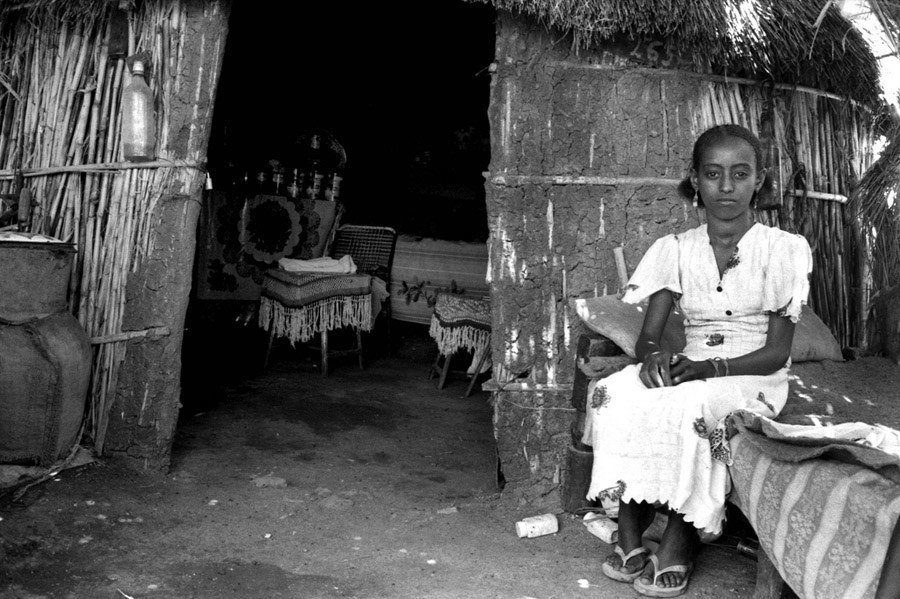 A girl outside her home on the Ethiopian border town of Kessalah. 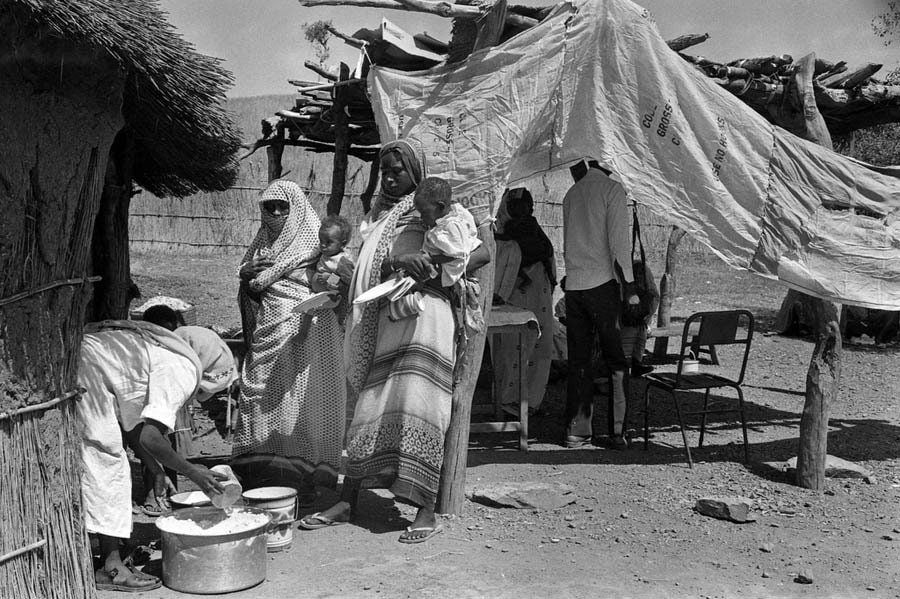 One of the food dispersal centers. While adequate in the beginning, food supply became low as more refugees arrived at the settlements. 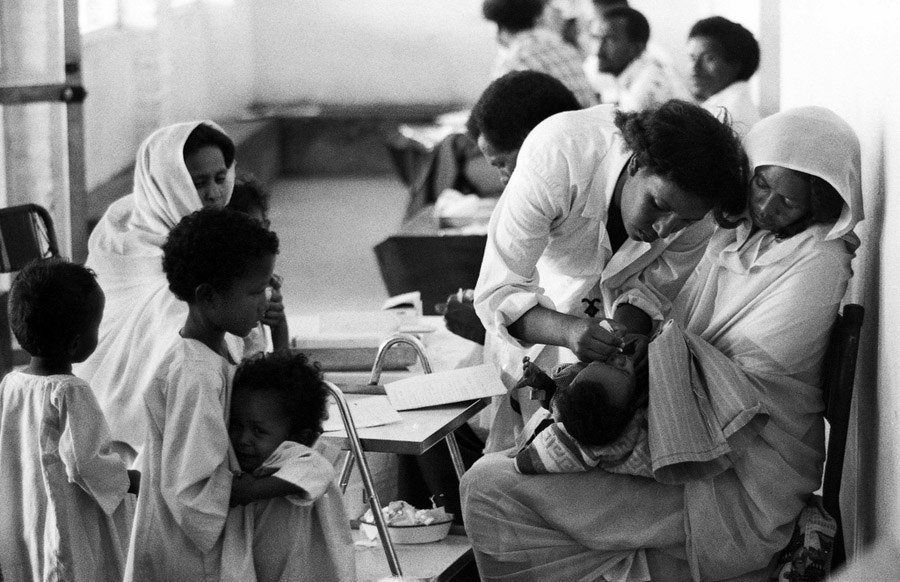 Immunization clinics helped fight outbreaks of measles and malaria -- from which people died each day. 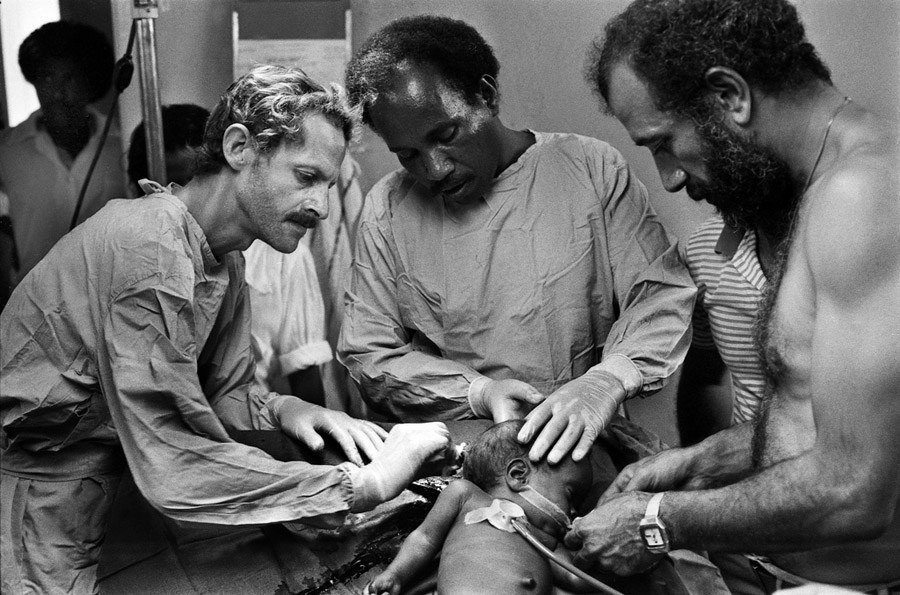 Relief surgeons from Egypt attend to a young patient. Mothers would sometimes hide their sickest children to make sure the healthier ones got care and survived, since medicine was limited. 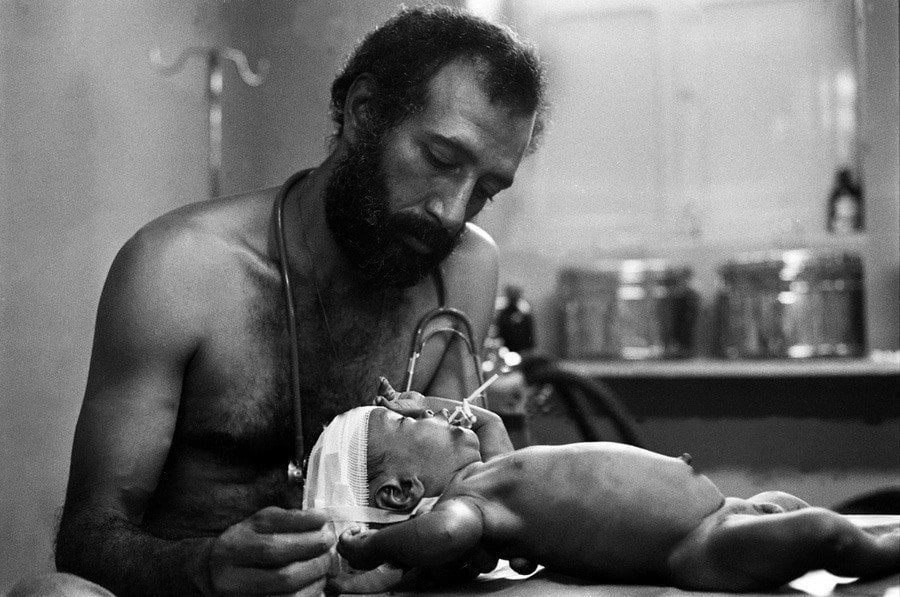 Without the help of relief workers, many more would have succumbed to sickness and disease. 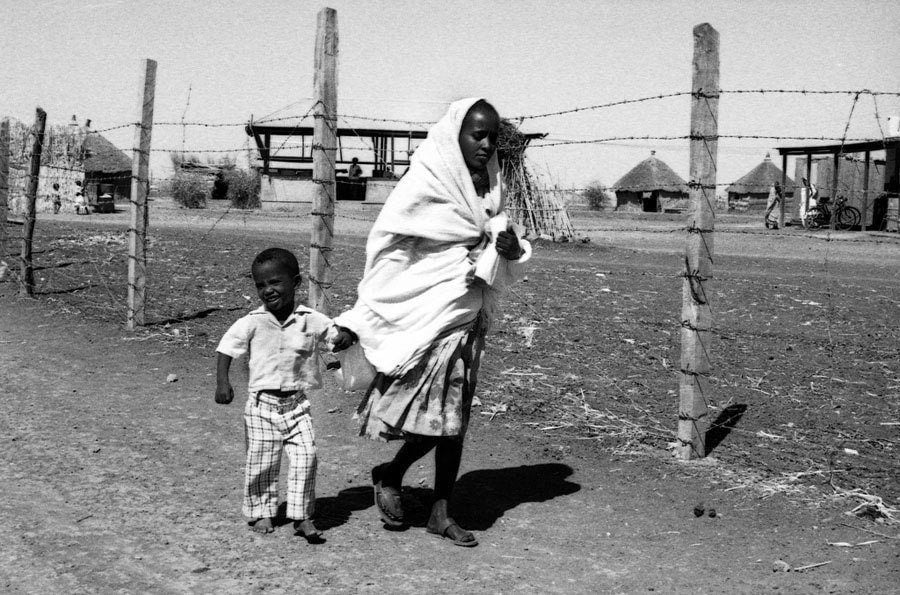 Outside of the settlement fence, a boy walks along with his mother. 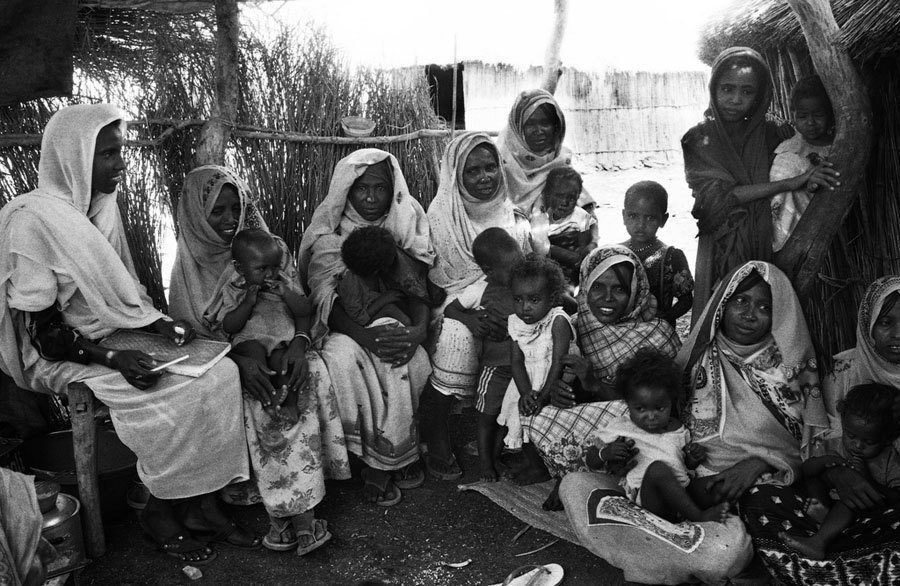 A well-baby group for mothers with small children. In some places, a cup of milk and a fortified biscuit comprised a child's daily ration. 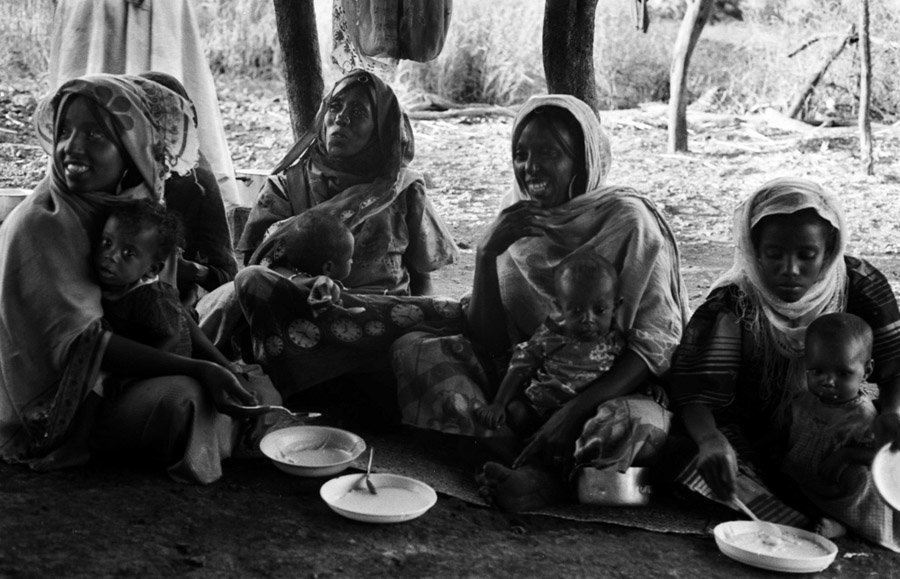 The level of organization varied from settlement to settlement, with the greatest difference being the level of healthcare and distribution of food. 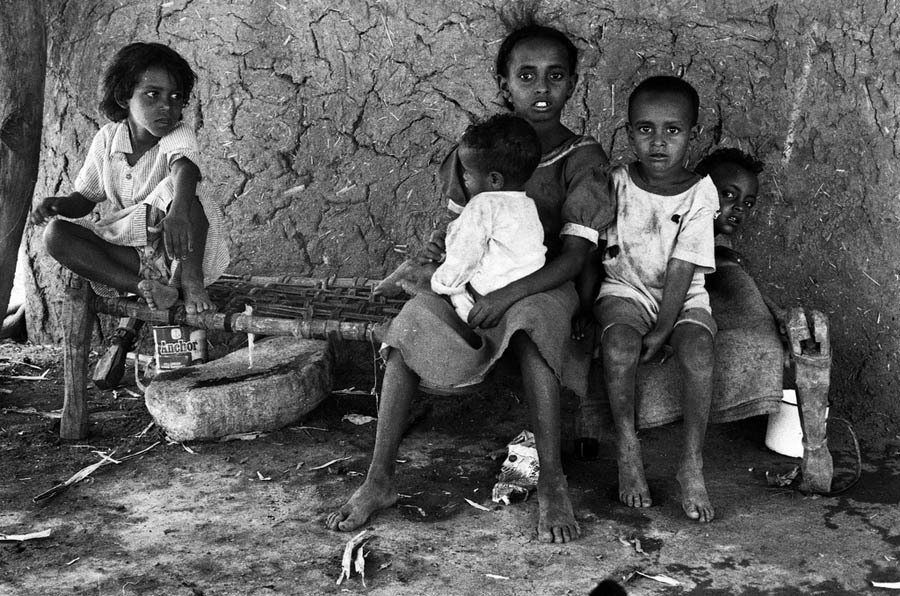 Refugee camps were mostly filled with women, children, and the elderly; most physically capable men (or boys of age) had been drafted into the Ethiopian army. 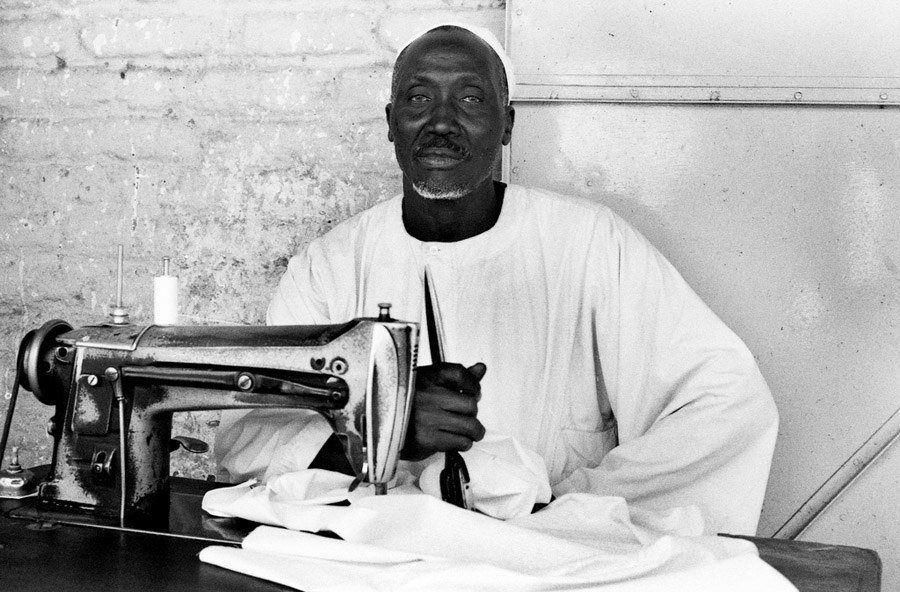 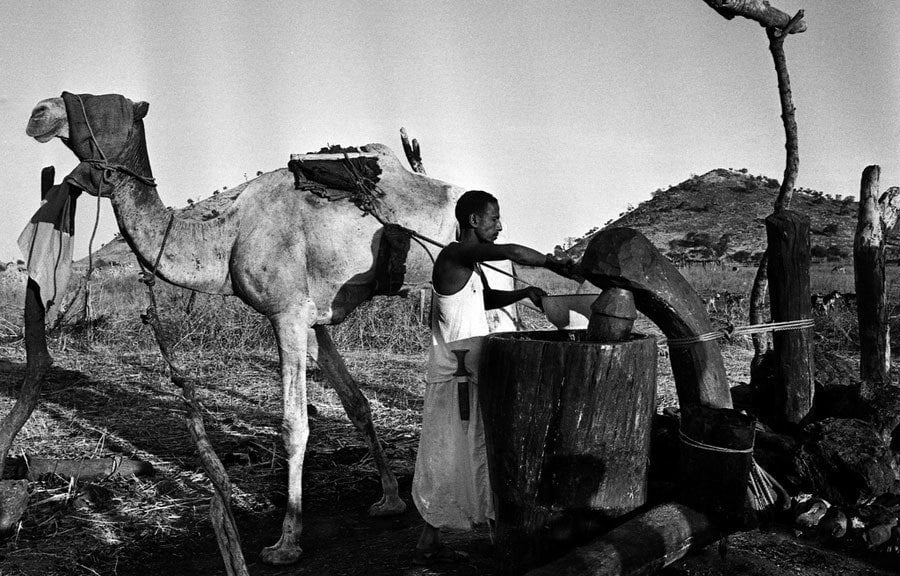 Camels provided the pressure needed to extract oil from sesame seeds, which was used in cooking. 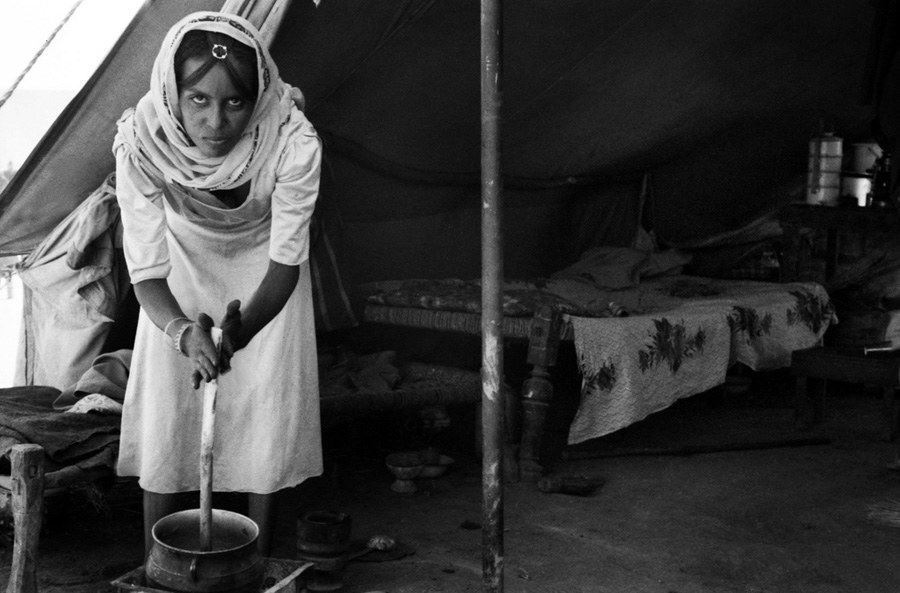 A popular meal for the better-off camps was a mix of sorghum, rice, sugar and soybean oil added to chicken or beef broth. Some camps had corn or soy meal mixed with water. 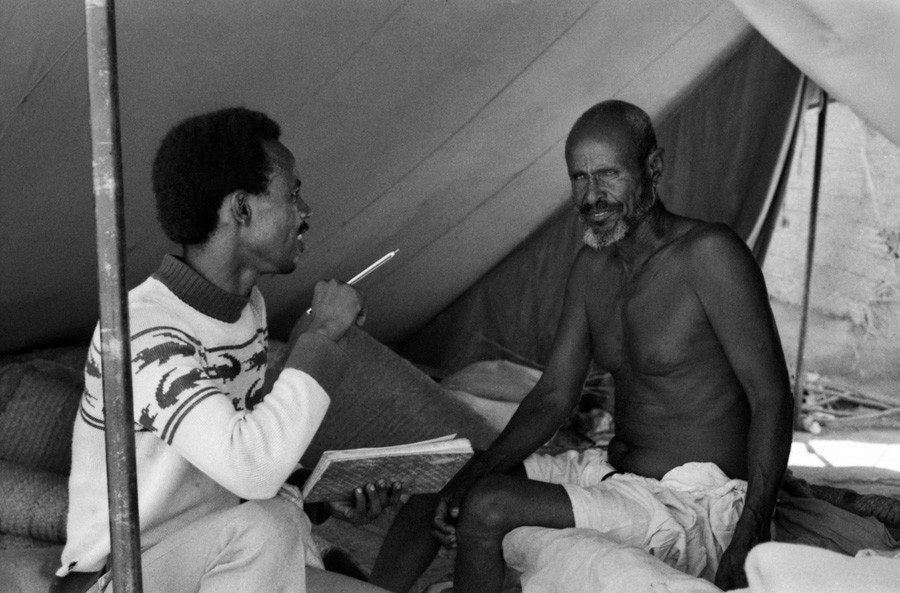 Healthcare surveyors visited refugees to ascertain the level of care being administered. 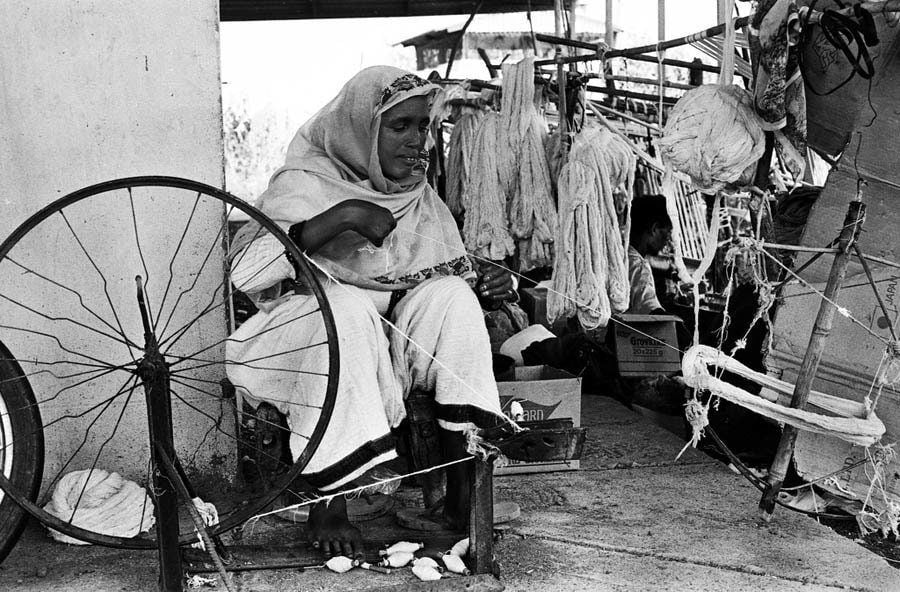 A weaver with her equipment. 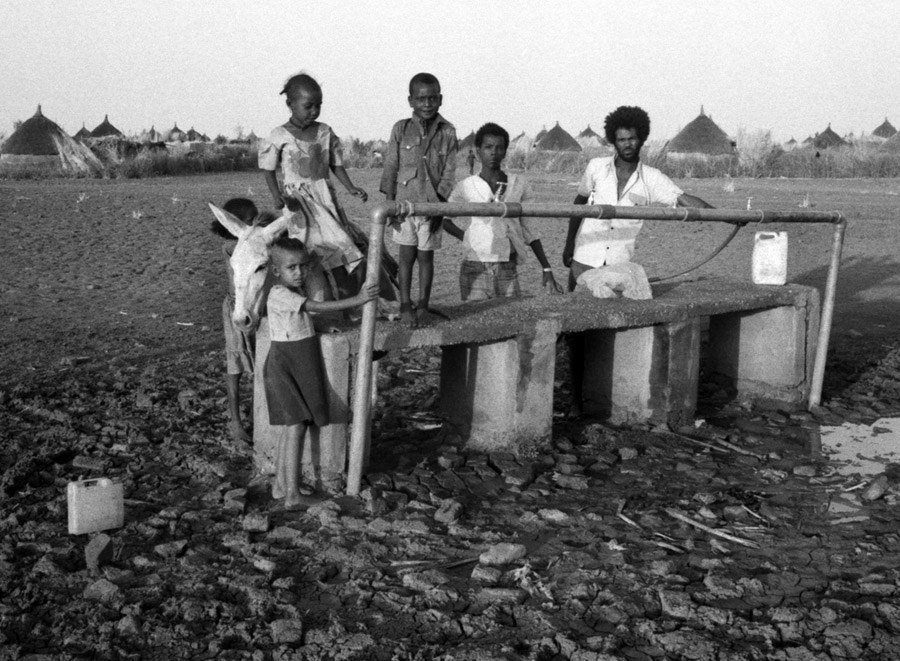 There were sometimes water wells located at the camps, though you'd be lucky to have one that was usable. 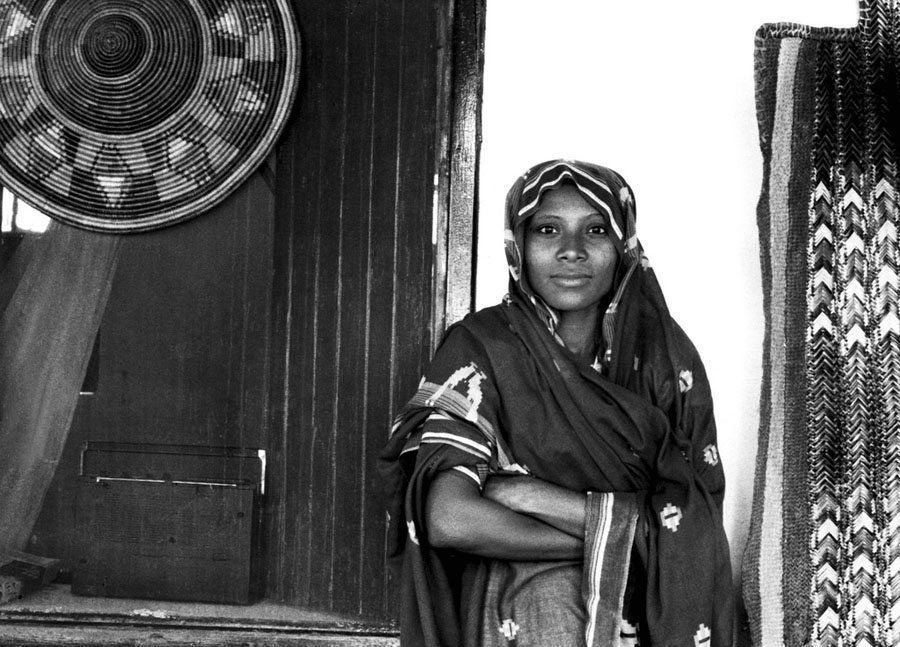 Portait of a refugee named Fatima.

All photos via Frank Keillor.

Next, meet the Virginia farmer who became the king of North Sudan. Then, see how photographer Kevin Carter took one iconic image in the Sudan that changed the world and ultimately helps explain why he took his own life.