As a result of the Syrian civil war and the accompanying war against ISIS, approximately 4.8 million people in the surrounding area are now refugees, according to the United Nations.

These people have lost their homes, then fled on foot or on small rafts across the sea, all in the hopes of building a stable life for themselves and their families in Europe and beyond. And with people flooding into other nations, the Syrian refugee crisis has tested the resolve — and tolerance — of many nations around the world. 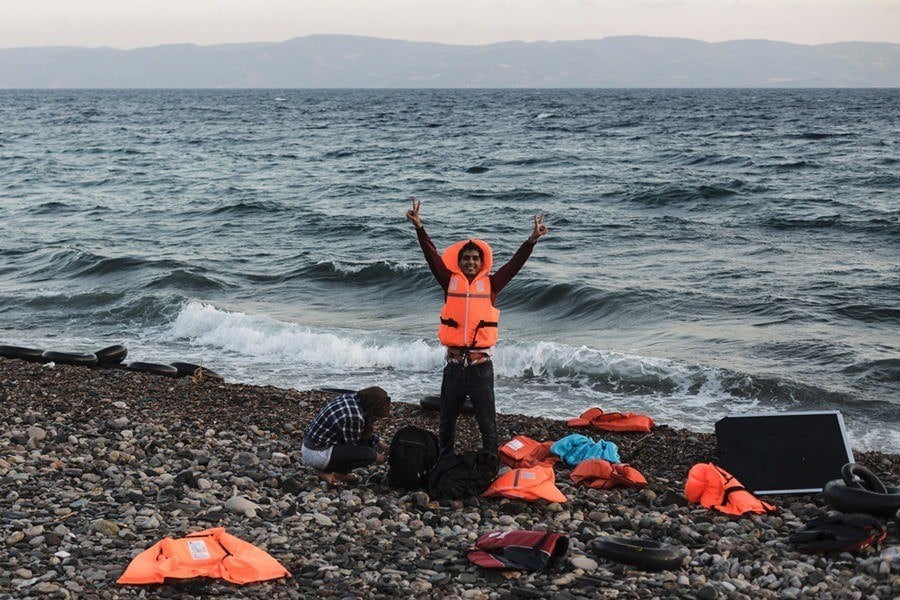 A Syrian refugee flashes the victory sign after arriving on the shores of Lesbos island in Greece in an inflatable boat from Turkey on August 23, 2015. ACHILLEAS ZAVALLIS/AFP/Getty Images 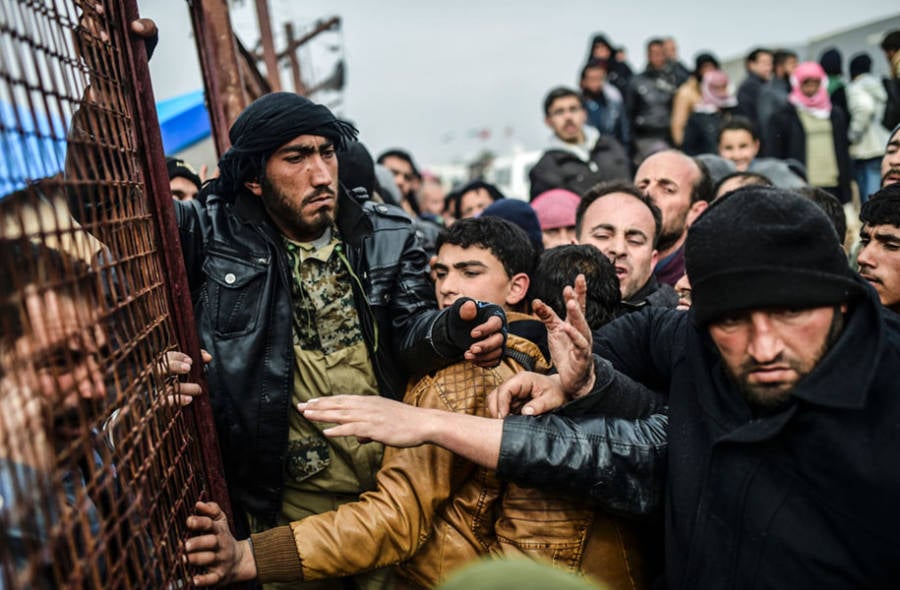 Syrian refugees fleeing the embattled city of Aleppo push each other as they wait for tents on February 6, 2016 in northern Syria, near the Turkish border crossing.BULENT KILIC/AFP/Getty Images 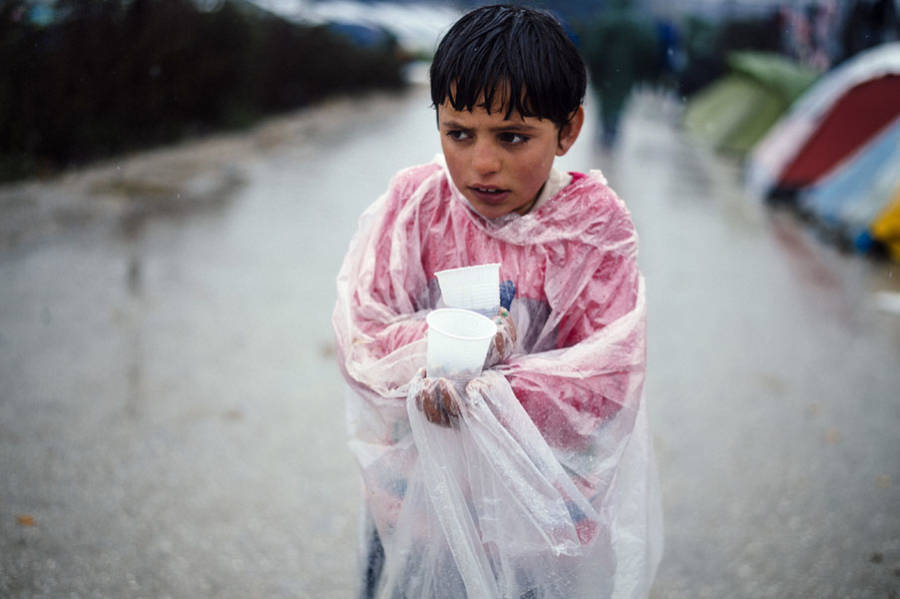 A young boy walks in the rain on March 10, 2016 at the makeshift refugee camp at the Greek-Macedonian border, near the village of Idomeni, where thousands of refugees and migrants were stranded after most European and Balkan countries closed their borders.

At its peak, 14,000 mainly Syrian and Iraqi refugees camped out in Idomeni, but in May 2016, Greek police shut down the camp, hoping to send refugees to "official camps."DIMITAR DILKOFF/AFP/Getty Images 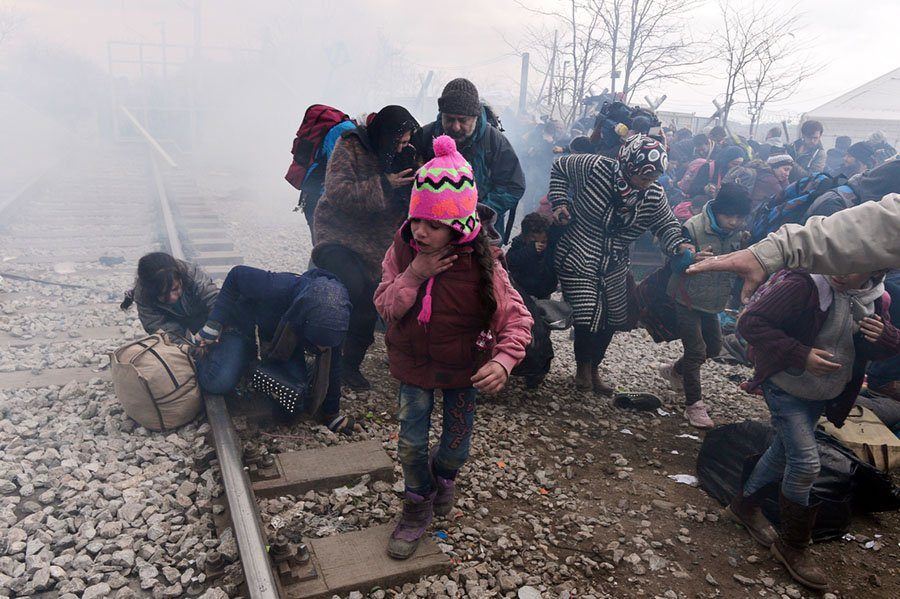 A child coughs and chokes after Greek police fired tear gas at hundreds of stranded Iraqi and Syrian refugees who tried to break through the Greek border fence in Idomeni, on February 29, 2016. LOUISA GOULIAMAKI/AFP/Getty Images 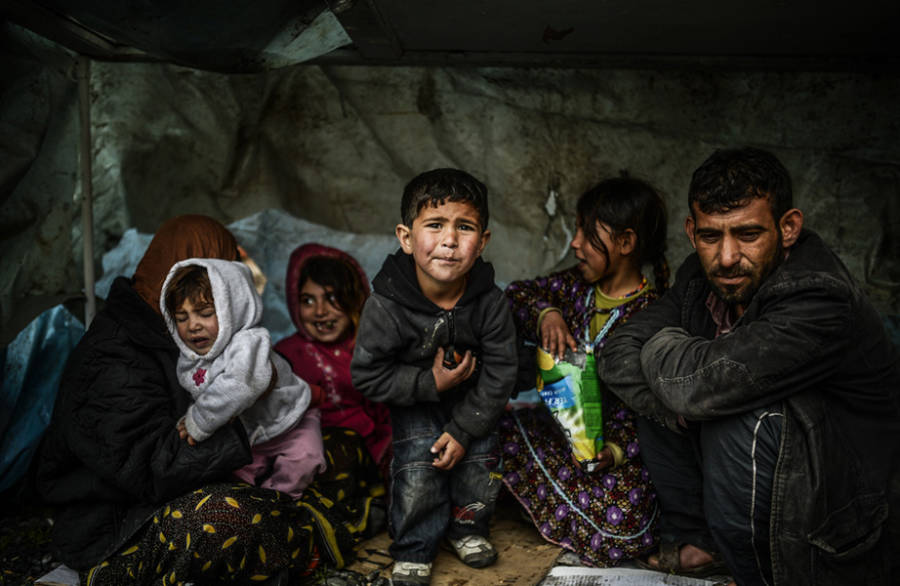 A Syrian refugee family from Aleppo takes shelter on a rainy day in Uskudar, Istanbul on March 8, 2014. 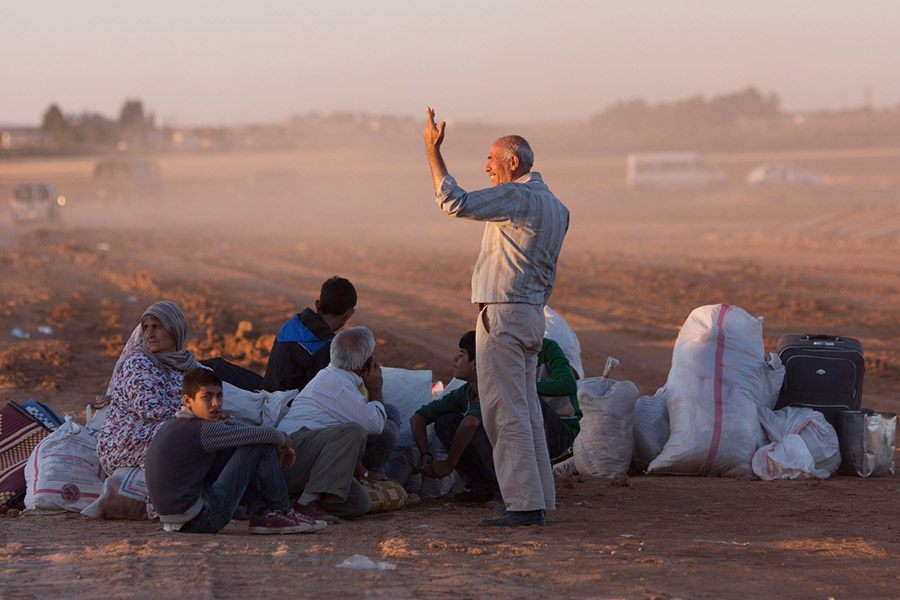 Refugees sit with their belongings after crossing the Syrian border into Turkey on October 1, 2014. Carsten Koall/Getty Images 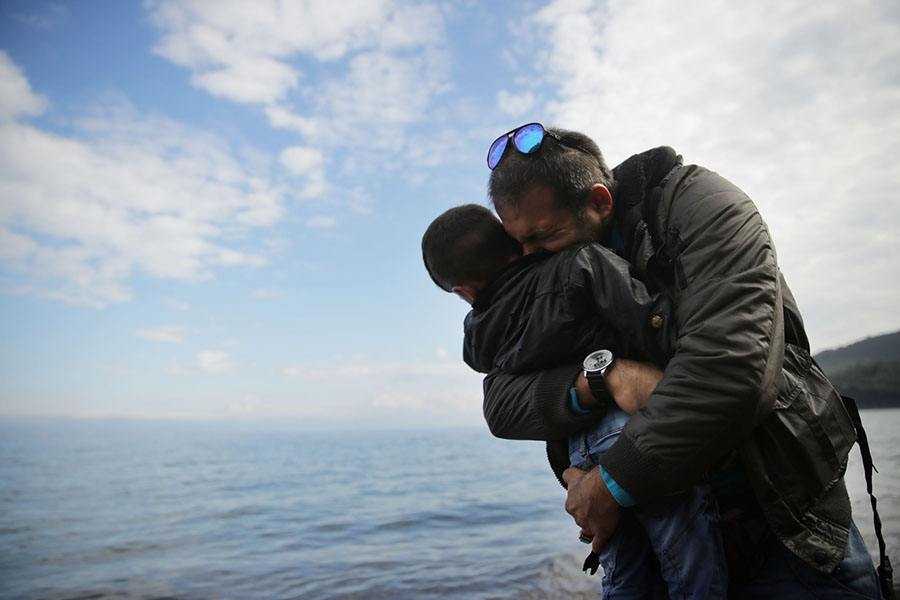 A man hugs his son moments after arriving on the island of Lesbos in a raft from Turkey with other Iraqi and Syrian refugees on October 13, 2015.Spencer Platt/Getty Images 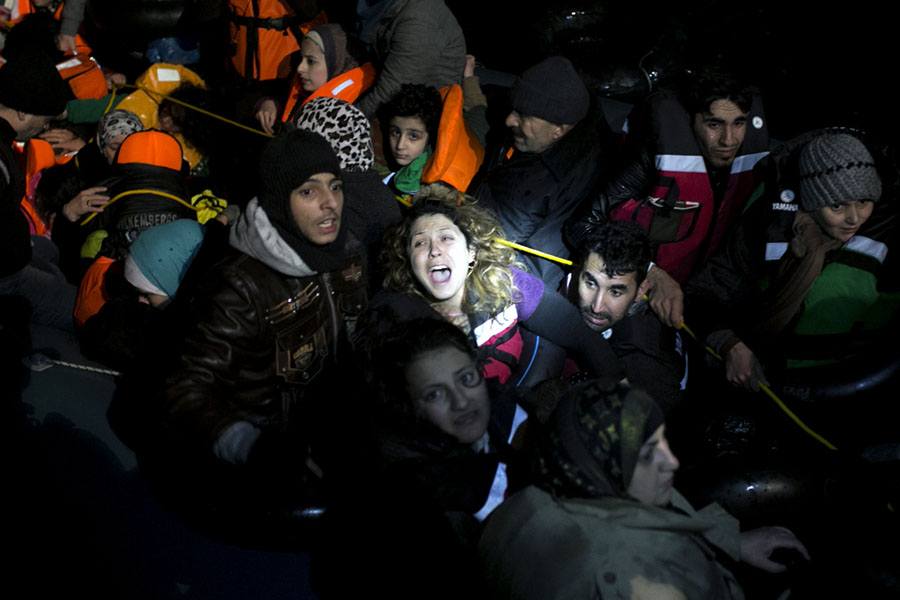 A Syrian woman reacts as refugees aboard an inflatable dinghy are about to be rescued by MOAS (Migrant Offshore Aid Station) while attempting to reach Greece on January 16, 2016. 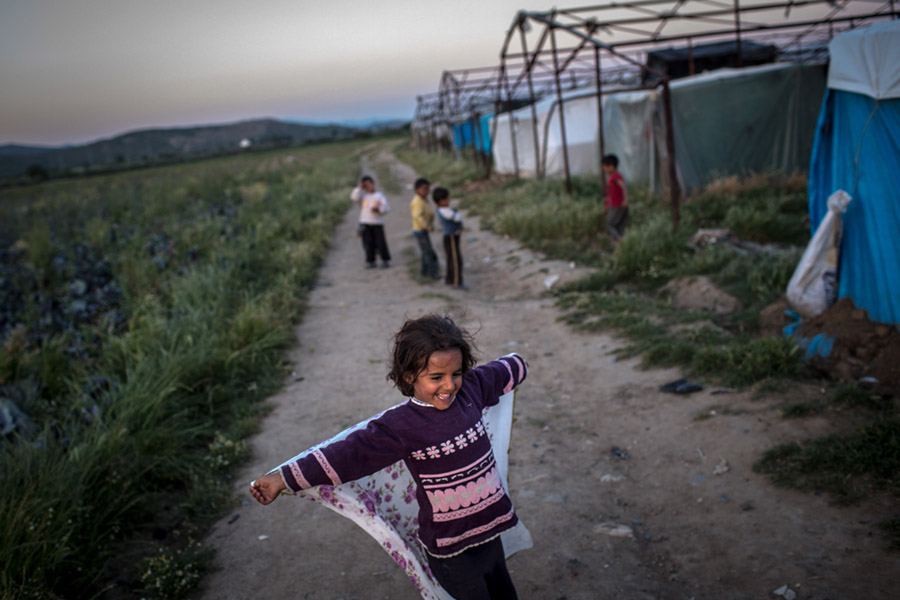 A Syrian girl plays outside a tent camp on the outskirts of Izmir, Turkey on April 27, 2016.

A month earlier, the EU reached a deal with Turkey stipulating that if refugees arriving in Greece do not apply for asylum in Europe or if their claim is rejected, they will be sent back to Turkey, where their journey began.
,br>As a result, many refugees are stranded in Turkey, hoping to settle there permanently. With limited healthcare and education, and without stable housing, many are forced to squat on empty land or unused buildings, living in tents or makeshift structures and under the constant threat of being relocated to one of the 25 official camps elsewhere in the country.

Although many have been given restricted work permits allowing them to work various jobs, the long hours and minimal pay only provide enough money for basic necessities. Most cannot afford rent. Chris McGrath/Getty Images 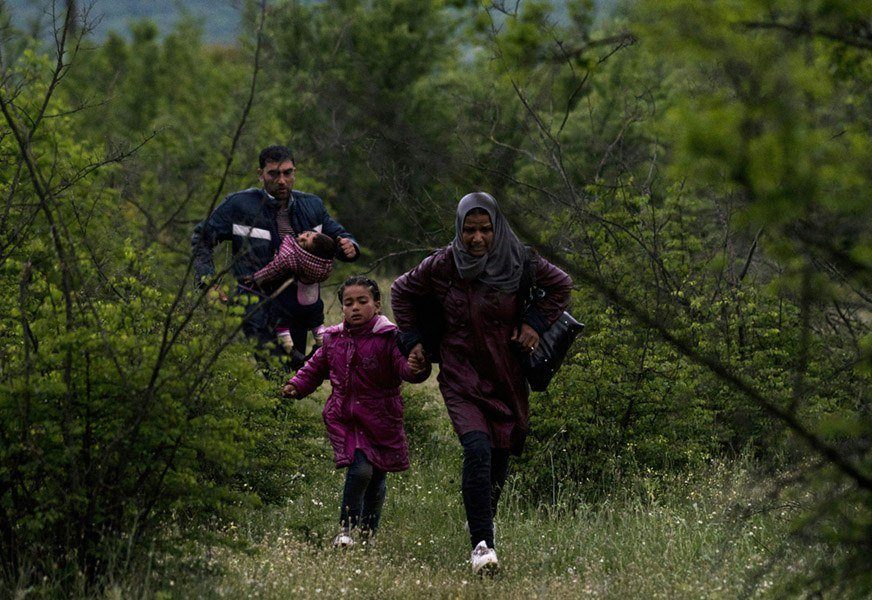 Syrian refugees run in a forest after illegally crossing the Greek-Macedonian border on April 23, 2016.

The BBC reports that since Europe closed its borders to migrants, 60,000 people have become stranded in the already financially strained Greece, waiting to find out if they will be granted asylum in Europe.JOE KLAMAR/AFP/Getty Images 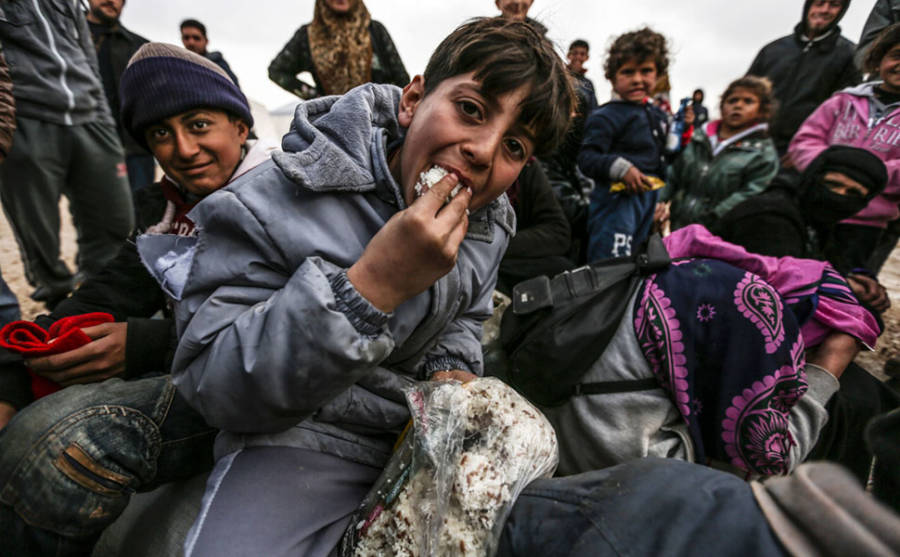 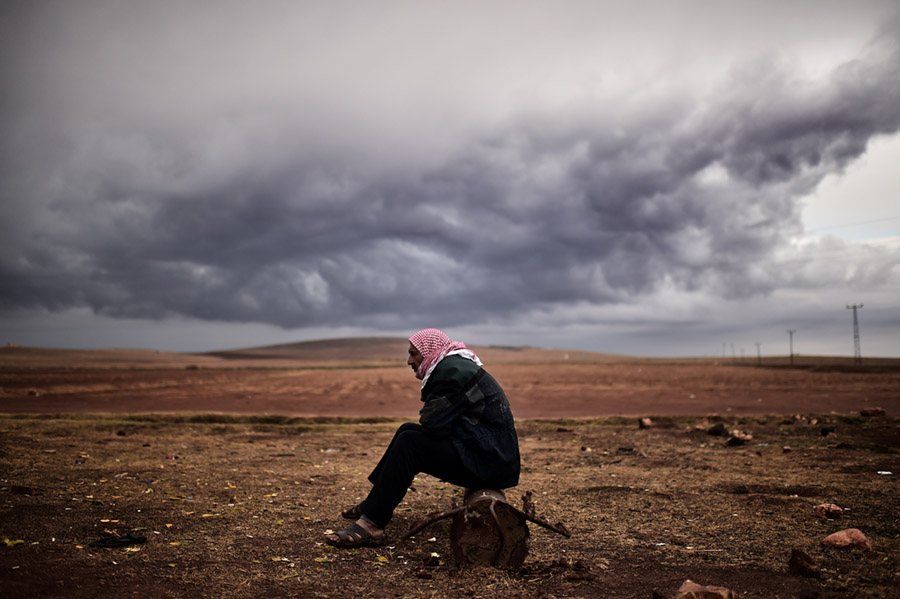 A Kurdish man sits at the border area close to the southeastern village of Mursitpinar in 2014.

Heavy fighting between Islamic State militants and Kurdish fighters has taken place there over the past several years.ARIS MESSINIS/AFP/Getty Images 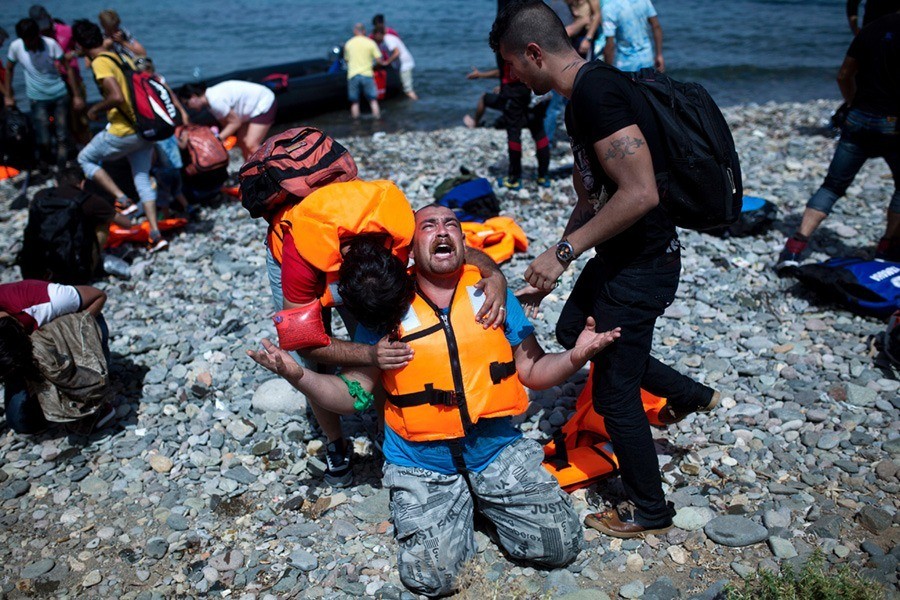 A refugee from Syria breaks down after arriving on the shores of the Greek island of Lesbos aboard an inflatable dinghy from Turkey in 2015.

Migrants protesting the border closings continue to clash with police in Greece. Police have used tear gas, rubber bullets, and grenades to drive people away from the border crossing. ANGELOS TZORTZINIS/AFP/Getty Images 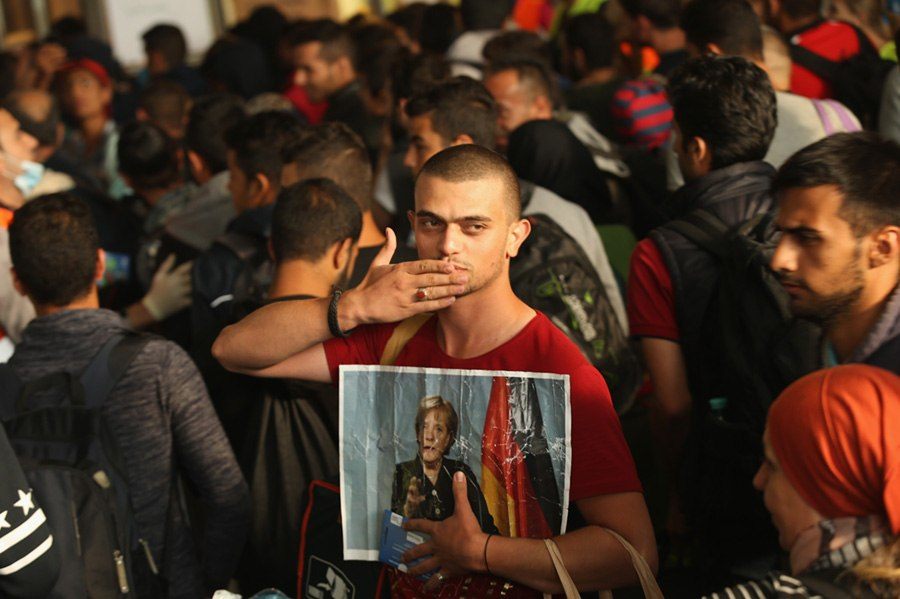 A migrant from Syria holds a picture of German Chancellor Angela Merkel as he and around 800 other refugees arrive in Munich, Germany in September 2015. 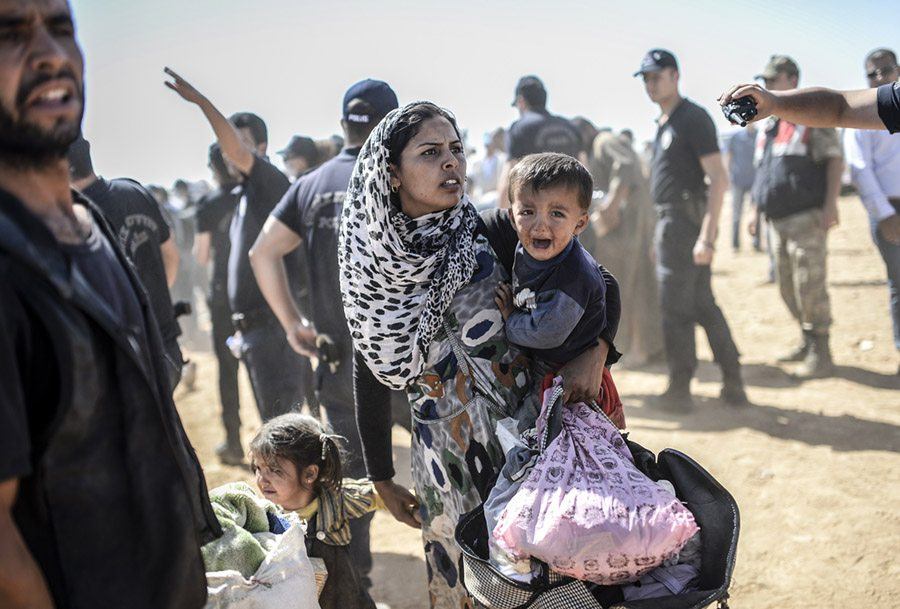 A Syrian Kurdish woman crosses the border between Syria and Turkey on September 23, 2014. 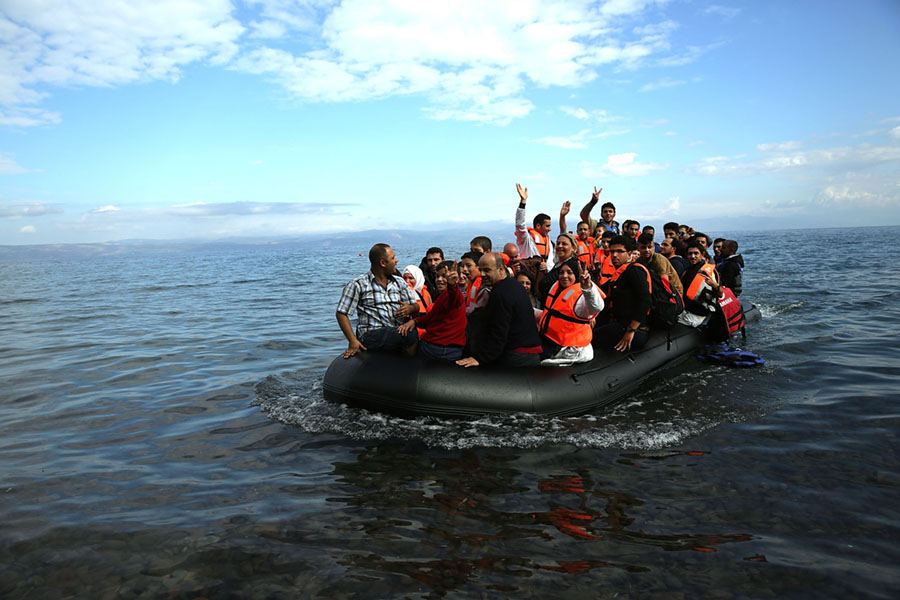 A raft carrying Syrian and Iraqi refugees arrives on the island of Lesbos from Turkey on October 13, 2015.

Dozens of rafts are still making the journey daily as thousands flee conflict in Iraq, Syria, and Afghanistan. UNHCR reports that in 2015, 1 million refugees reached Europe by sea, and 4,000 more drowned trying to make the journey. Half of them were Syrians fleeing war and persecution. Spencer Platt/Getty Images 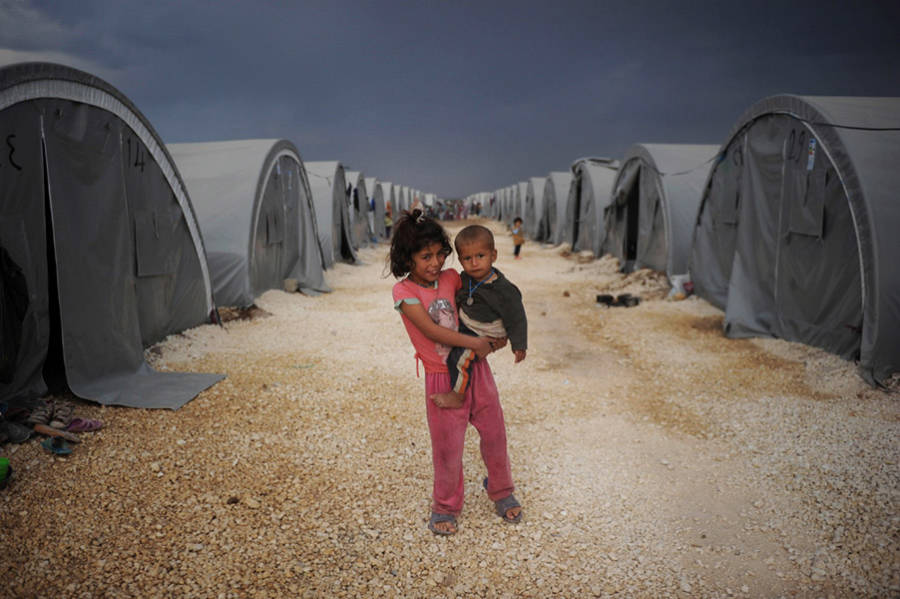 Kurdish refugee children from the Syrian town of Kobani walk through a makeshift camp.Kutluhan Cucel/Getty Images 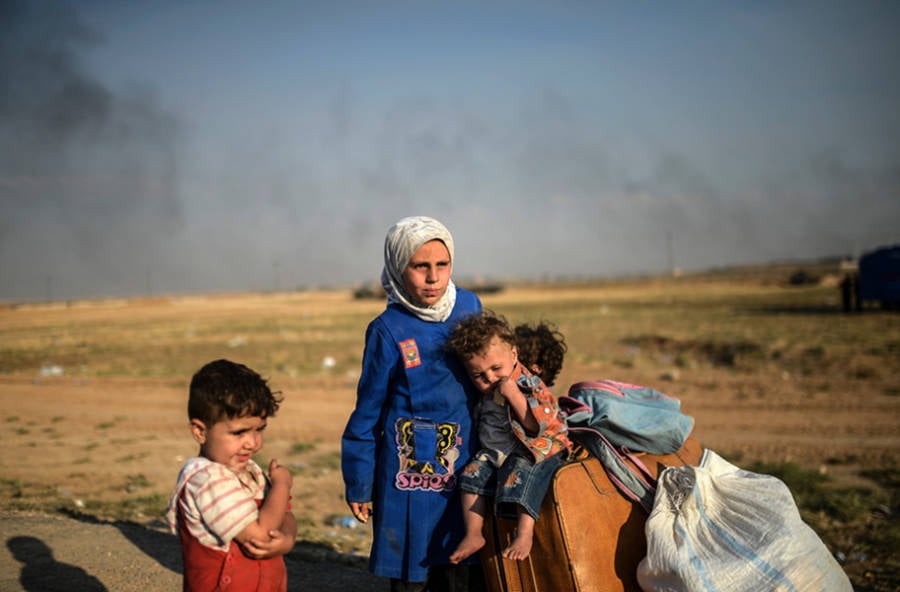 Syrian children wait after entering Turkey at the Akcakale border crossing between Turkey and Syria in 2015. BULENT KILIC/AFP/Getty Images 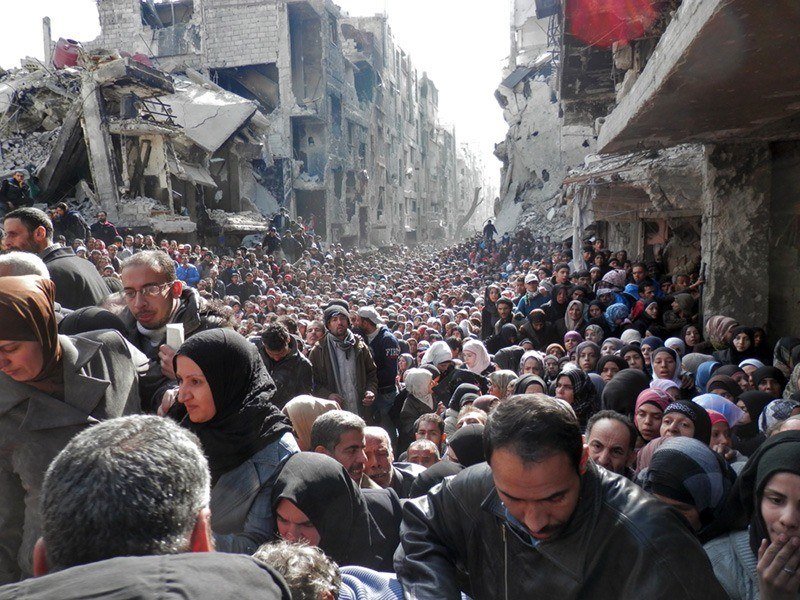 Some of the 18,000 Palestinians trapped in Damascus that lived at the Yarmouk refugee camp in 2014. 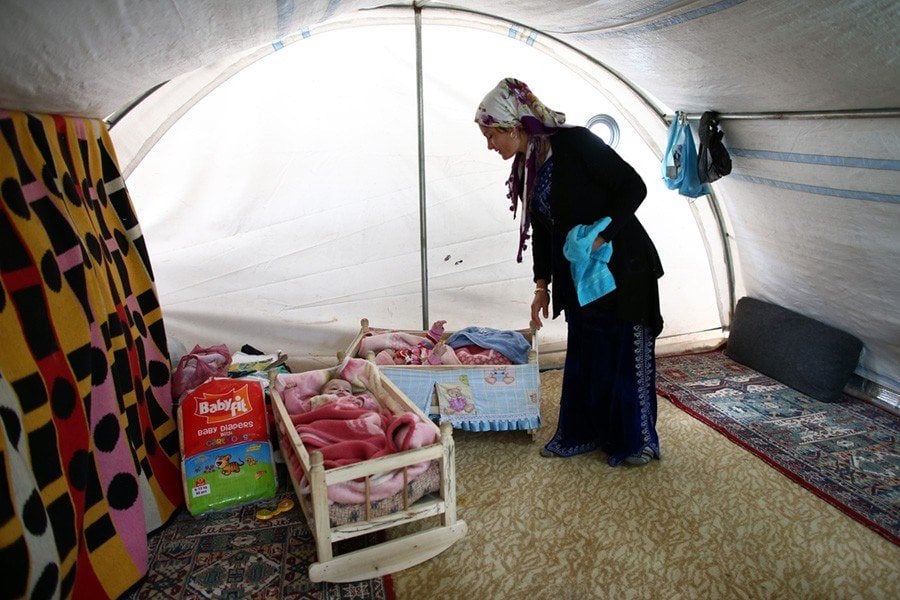 A mother tends to her seven-month-old twins in her tent in a refugee camp in Turkey on March 22, 2015. Carl Court/Getty Images 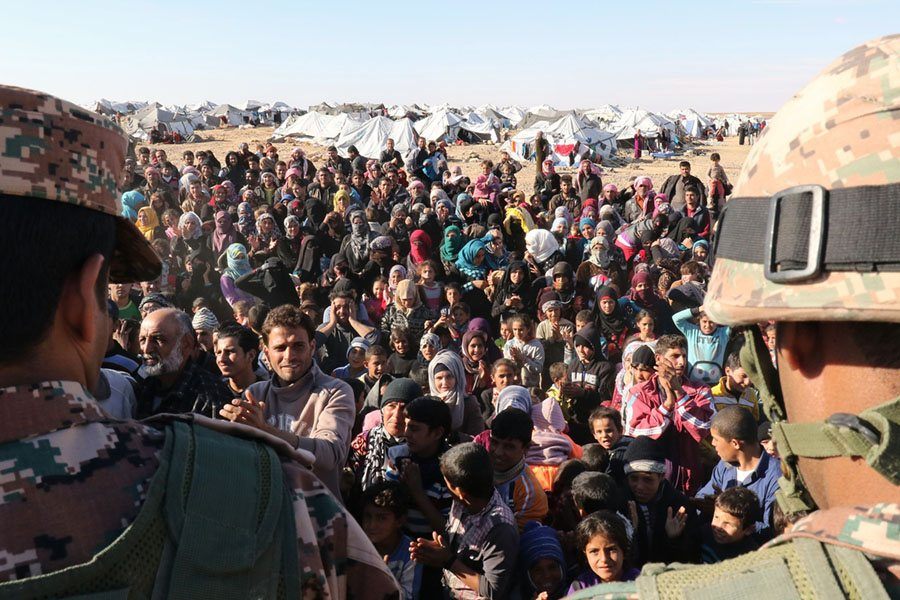 Syrian refugees, stuck between the Jordanian and Syrian borders, wait to cross into Jordan on January 14, 2016.

In just five months, Jordan opened its borders to 20,000 refugees, but after the border crossing was designated a military zone in June 2016, the Jordanian government barred UN aid workers from providing food, water, and medical care to the those living in refugee camps.KHALIL MAZRAAWI/AFP/Getty Images Syrian refugees flee as Turkish soldiers use a water cannon to move them away from fences at the Turkish border near the Syrian town of Tal Abyad on June 13, 2015. BULENT KILIC/AFP/Getty Images