Not only are fossilized crocodile tracks an extreme rarity in Asia, but these seemed to have been made by a bipedal species that ran after its pray like an ostrich. 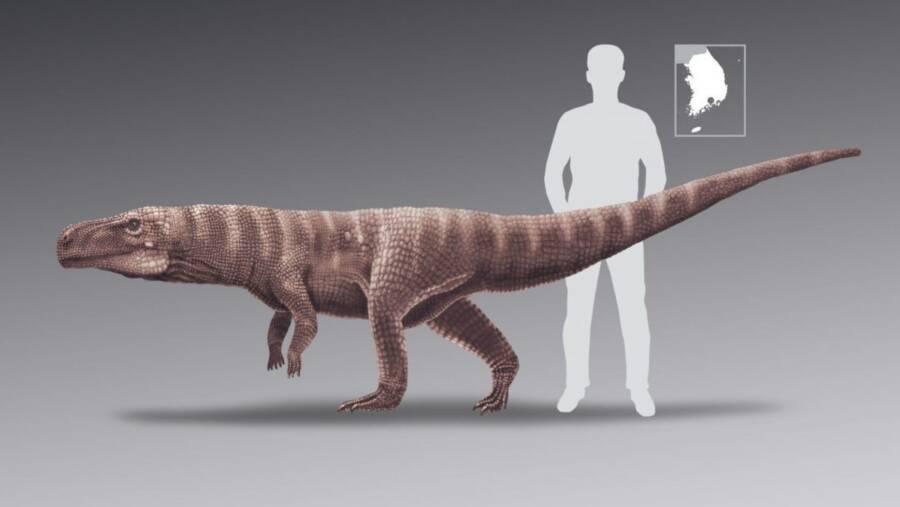 A team of archaeologists from the University of Colorado Denver (CU Denver) have discovered ancient footprints near Sacheon City in South Korea. Initially thought to have been made by a flying reptile called a pterosaur, researchers now believe they belonged to a bipedal crocodile ancestor 110 to 120 million years old.

According to New Scientist, the fossilized footprints were better preserved and more detailed than ones found in 2012 around 31 miles away. Discovered by CU Denver’s Martin Lockley and his peers, they include skin impressions from the animal’s heels and toes.

The tracks are seven to nine and a half inches long, with Lockley explaining their sizes correlate to those of a crocodylomporh — an ancestor of modern crocodiles that walked on its two hind legs.

According to the BBC, Lockley and his team found nearly a hundred of these Early Cretaceous tracks. Published in the Scientific Reports journal, Lockley believes the discovery of this newly-dubbed Batrachopus grandis could well change how we collectively think about crocodiles.

“People tend to think of crocodiles as animals that don’t do very much,” he said. “Nobody automatically thinks I wonder what this would be like if it was bipedal and could run like an ostrich or a T. Rex.” 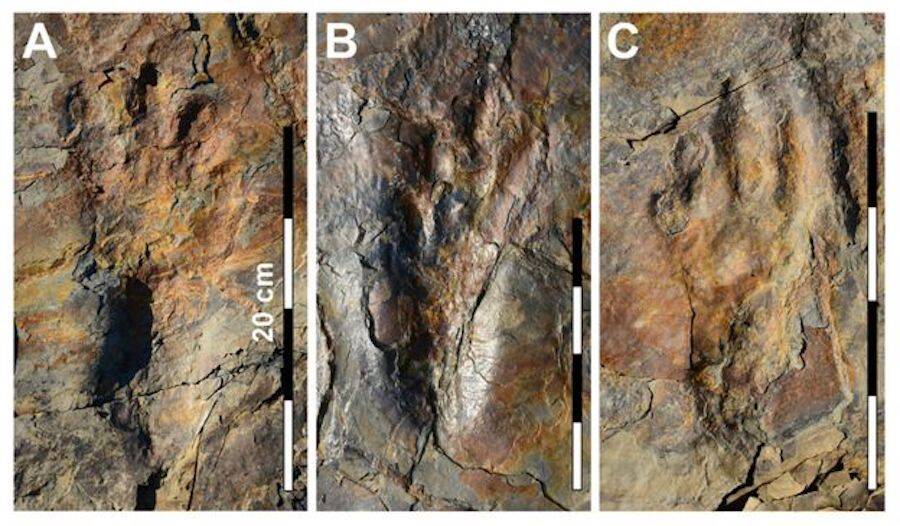 Batrachopus grandis weighed nearly 1,000 pounds and had a mouth full of razor-sharp teeth. While it’s unclear just how fast the ancient reptile was, it measured around 13.1 feet in length and fed on anything it could catch — including other dinosaurs.

“Typical crocodiles walk in a squat stance and create trackways that are wide,” said Chinju National University of Education professor Kyung Soo Kim. “Oddly, our trackways are very narrow looking — more like a crocodile balancing on a tight-rope.”

Researchers believe these tracks were made by a crocodile and not a dinosaur or bird because the whole foot can be seen. Birds and dinosaurs walk on just their toes, but a crocodile puts pressure on the whole foot, like humans do.

“When combined with the lack of any tail-drag marks, it became clear that these creatures were moving bipedally.”

Most importantly, this discovery has laid previous confusion to rest, as the prints that Lockley and his team found in 2012 were thought to have been made by the flying pterosaur reptile species. These animals also left trackways that appear bipedal.

Lockley now believes both prints found eight years ago belonged to the same species as these latest trackways — Batrachopus grandis. Ultimately, much of the initial skepticism came from an underlying dismissal that a crocodile species that ran like an ostrich was even feasible in our prehistoric world.

“No one knew that large bipedal crocs existed in the early Cretaceous,” he said. 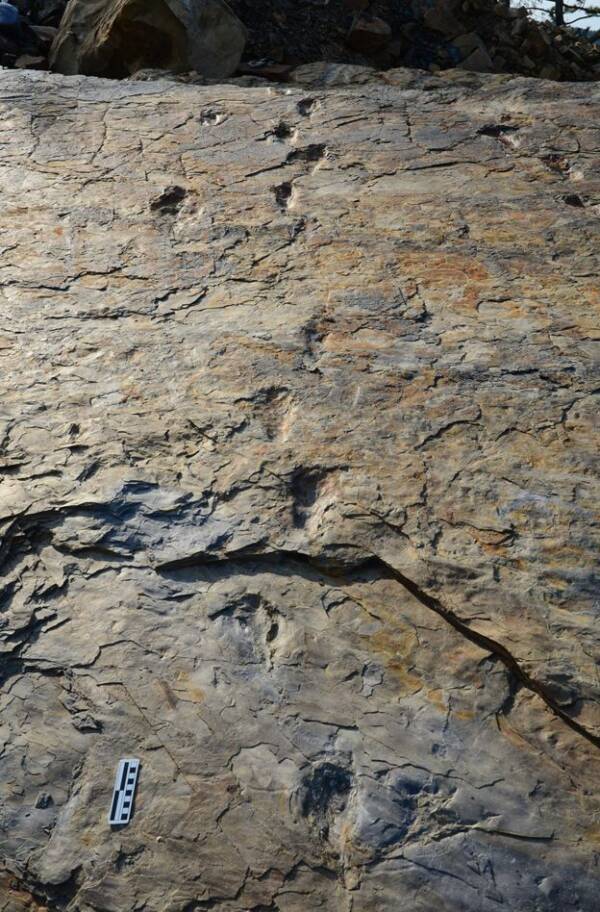 Kyung Soo Kim/CU DenverMartin Lockley remarked that nobody was even aware of large bipedal crocs having existed in the Early Cretaceous period.

As it stands, no physical remains of this species have been found, making their fossilized prints the only bit of evidence of their existence. Though smaller varieties have been discovered previously, they belonged to a relative of the Batrachopus crocs that lived tens of millions of years earlier.

Most importantly, those crocodiles walked on all fours. Lockley is currently adamant that the only explanation for the trace fossils found in South Korea are that this is a newly-discovered species that most definitely walked on two legs.

“We can see all the digits, all the ridges in the skin — just as you were looking at your hands,” he said. “They put one foot in front of another; they could pass a sobriety test walking on a straight line. And there are no footprints.”

Kyung Hoo Kim explained that dinosaurs and their bird descendants didn’t leave any footprints, as they typically walked on their toes. The lack of tail-drag marks, of course, only strengthens the argument this creature was bipedal.

“The discovery of these tracks solved the ‘whodunnit’ mystery,” said Lockley. 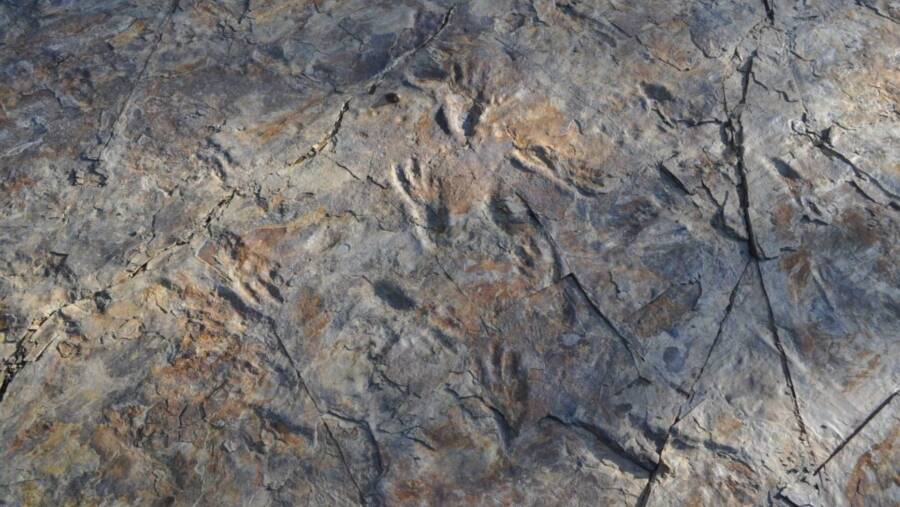 “Fossil crocodile tracks are quite rare in Asia, so finding an abundance of nearly one hundred footprints was extraordinary,” said University of Queensland paleontologist Dr. Anthony Romilio.

Ultimately, however, there appears to be an academic split regarding the conclusions made by Lockley and his colleagues.

For Michaela Johnson of the University of Edinburgh, the impressions of crocodile-like scales and chunk-looking toes do seem to support his argument that these were made by a crocodylomorph rather than pterosaur.

“But modern crocodiles have at least some webbing between toes in their back feet, whereas these tracks don’t appear to have any,” she added.

Pedro Godoy at Stony Brook University in New York takes this admitted lack of conclusive proof a bit further. While he agrees that the tracks don’t appear to have been made by a pterosaur, he believes far more evidence is required to classify them to an ancient crocodile.

In the end, it appears as though further work has to be done to convince a majority of those in Lockley’s field of what he’s found. Fortunately, there seems to have been an abundance of ancient crocodile-centric discoveries in the last few years — with no signs that’ll change in sight.

After learning about the 120-million-year-old crocodile that walked on its hind legs like the T. rex, read about the study claiming T. rex legs were long to save energy rather than run. Then, learn about ancient Egyptians that hunted crocodiles just to mummify them.