The species was one of the largest coastal predators of the Jurassic period. 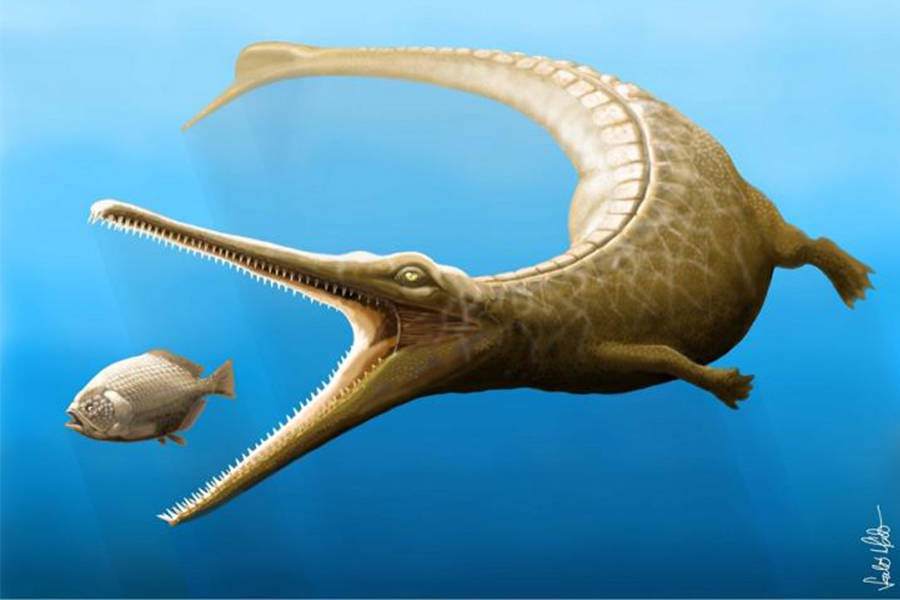 A new study has shed light on how ancient crocodiles have evolved into dolphin-like creatures.

The study, published in the PeerJ journal, revolved around a specimen discovered in 1996 in north-west Hungary. The fossil was the first of its kind and a major breakthrough for the team of paleontologists that took over the research.

The fossilized specimen, named Magyarosuchus fitosi, represents one of the missing links in crocodile evolution, and a missing branch on their family tree, so to speak.

Researchers have been aware of the “dolphin-like” creatures that the study mentions crocodiles turning into for over 200 years. However, there has always been a gap, a missing link between them and ancient crocodiles. Now, researchers say, that gap is closing.

While some Jurassic-era crocodiles had heavy body armor on their stomachs and back for protection, others had dolphin-like tail fins and flippers. However, this newly discovered species had both the armor and the fin tail, which sets it somewhere between the original group of Jurassic crocs.

“The “dolphin-like” marine crocodiles, called metriorhynchids, have been known about for over 200 years,” said Dr. Mark Young, a researcher from the University of Edinburgh’s School of GeoSciences who was involved with the study, in an interview with All That’s Interesting. “They were one of the first groups of fossil reptiles to be named in scientific journals. Even before dinosaurs! They are thought to have gone extinct about 125 million years ago.”

“Magyarosuchus is odd, in that it was discovered in an open ocean type of rock deposit,” said Young, elaborating on what makes this specimen unique. “Most crocodiles close to metriorhynchids are found in coastal or lagoonal type deposits. It hints that there may be more of these types of crocodiles in the open ocean than we thought and that they ventured out into the deeper ocean earlier than we originally thought.”

Using data collected from the fossil, the researchers were able to find out where along the lines of evolution this new species fits.

“We ran a series of “phylogenetic analyses” using three different datasets,” Young explained. “These are analyses that assess the evolutionary position of species in the crocodile family tree based on their morphological features (such as the shape of bony processes, ratios of bones etc).”

He said that though data is not always conclusive, this time it was. In the future, knowing this will help close more gaps along these ancient reptiles evolutionary chains, and hopefully, paint a clearer picture of their history.

Next, check out the new study that claims there’s a possible link between brain cancer and cell phone use. Then, check out the scientists that discovered the oldest human fossils outside Africa.