Before the Revolutionary War's Battle of Cowpens, the colonists were in danger of losing the South to the British — but one man's military genius turned the tide of the war.

Taking place on January 17, 1781, the Battle of Cowpens marked a turning point in the American Revolutionary War in the South, boosting morale and offering colonists new courage in what would be the final days of the fight for independence.

It came not a moment too soon — the colonists were on the verge of losing the Carolinas forever when the stunning victory turned the tide. Their triumph was due in large part to the creative and unconventional tactics of American Brigadier General Daniel Morgan, whose feigned route and double envelopment went down as some of the cleverest ruses in military history.

The American South Hovers On The Verge Of Defeat 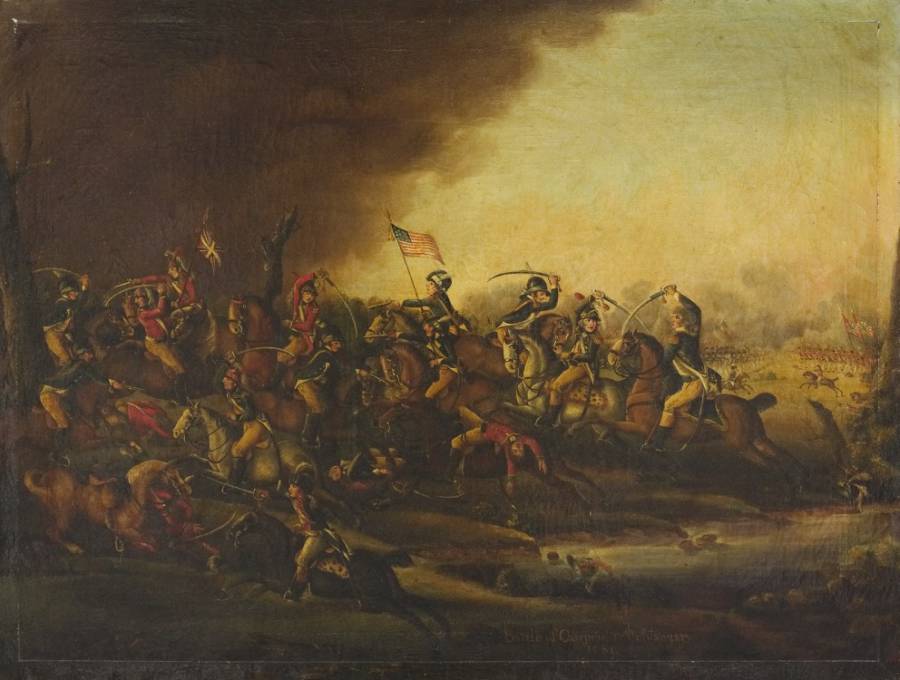 Frederick Kemmelmeyer/Wikimedia CommonsAn 1809 depiction of the Battle of Cowpens. British and American flags are prominently displayed.

Prior to 1781, the Carolinas had been the site of a series of military disasters for the colonists. The previous year, the Americans had lost the Siege of Charleston. The six-week-long conflict concluded with the surrender of 3,371 men to the British. It effectively put an end to the American army in the South.

Things got still worse for the colonists during the Battle of Camden later that summer, a loss so spectacular that the American general responsible never commanded troops again.

By the winter of 1781, all that was left was a scrappy resistance and a group of American guerrilla fighters who plagued any British troops caught in the outlying lands. For all intents and purposes, the British controlled South Carolina.

Brigadier General Daniel Morgan found himself in South Caroline for two reasons. First, his troops badly needed supplies, and they planned to forage in the area. They also needed to encourage the local colonists to continue to fight the good fight — morale in Cherokee County was flagging.

British intelligence, however, suspected a ruse; they had received some bad information that led them to believe Morgan and his men were planning an all-out assault on a nearby fort that was being held by British loyalists.

Setting The Stage For The Battle Of Cowpens 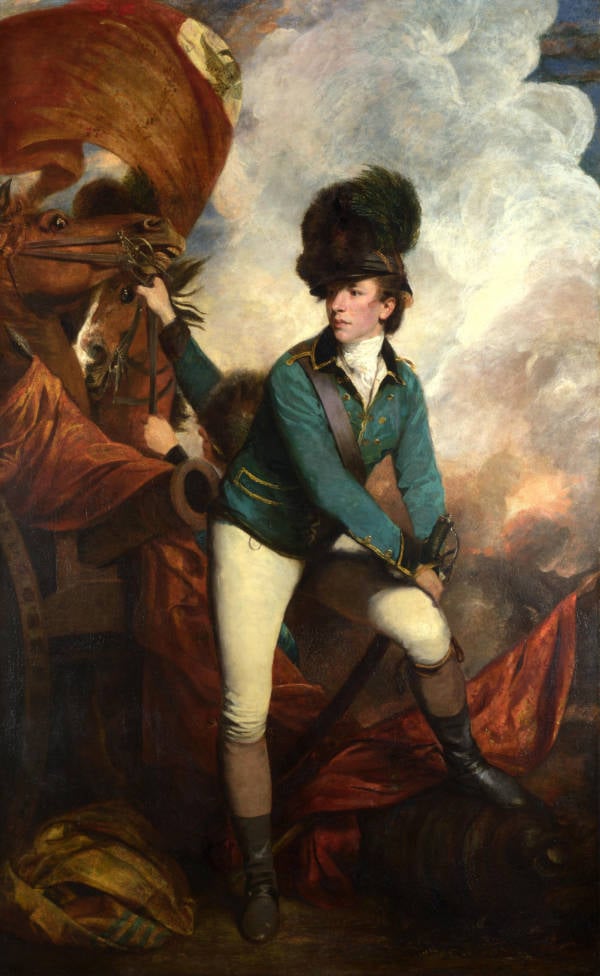 To deal with Morgan and his men, the British sent Sir Banastre Tarleton, the rising star of the British army. The lieutenant colonel was both hot-tempered and ruthlessly persistent.

He was also very young. At 26, he had already accomplished more than many British commanders twice his age: He had distinguished himself in the decisive victories at Charleston and Camden, had recently captured an American general, and was currently leading a famously experienced and deadly force of British loyalists.

There were also some unpleasant rumors circulating about him: at the Battle of Waxhaws, his soldiers had killed American troops who had already surrendered — a serious violation of the rules of engagement and one he denied having sanctioned.

Aware that Tarleton had added to his troops and was hot on his trail, Daniel Morgan retreated, fleeing north in the hope of making it across the Broad River.

But luck wasn’t on his side. Tarleton was driving his forces at a brutal pace and making better time than expected. With the river ahead of him and pursuit just hours behind, Morgan knew he was trapped; if he and his men were caught fording the river, it would be a massacre. Their best option was to turn and fight.

So he picked his battlefield, an open grazing area called “Hannah’s Cowpens,” and began to strategize.

The Battle Of Cowpens 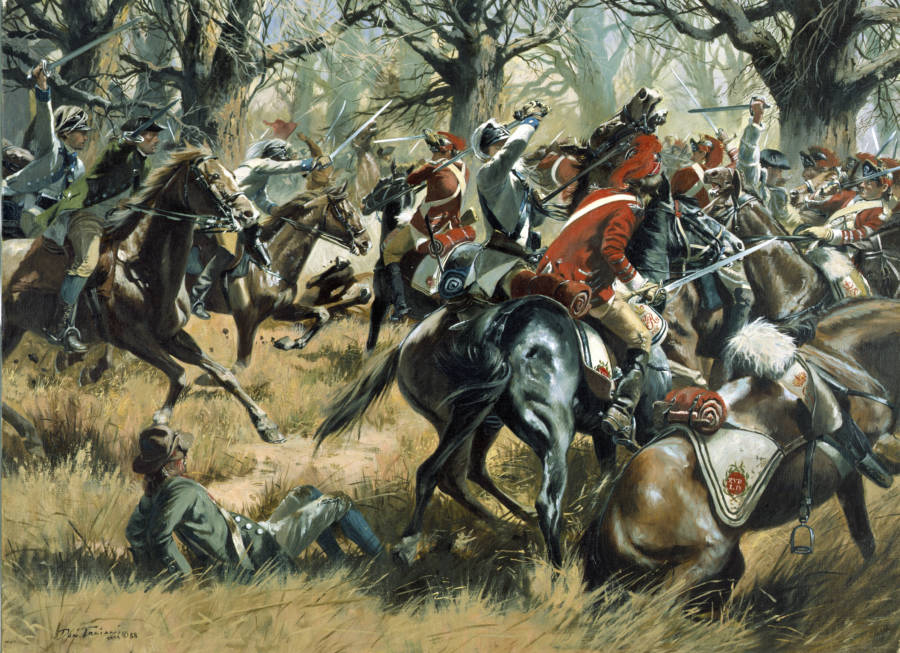 The National Guard/FlickrDon Troiani’s depiction of the Battle of Cowpens in South Carolina on Jan. 17, 1781.

Historians still debate exactly how many men Morgan had with him at the Battle of Cowpens. Estimates range from 800 to 1,900. What is clear is that he was lucky in his troops: most were seasoned veterans, and the local militiamen who came to help were also unusually well trained — a rarity for local recruits.

Morgan’s soldiers were also fortunate in their commander, an unconventional strategist who was aware of both his own troops’ weaknesses and his enemy’s.

Next, he left his flanks exposed, relying on geographical advantages — like a creek and a ravine — to keep the attacking British from sneaking up on his sides.

Knowing Tarleton, he reasoned that the most likely danger would come from the front: the opposing general favored a head-on approach and rarely used subterfuge.

But just to make certain, Morgan arranged his forces in three lines and placed the greenest men toward the front — making the temptation of a direct attack impossible for the aggressive Tarleton to resist.

For the pièce de résistance, he ordered the troops in the front line to fire several volleys and then retreat, pretending to flee as though frightened by the British advance. They would then covertly reform to attack again.

At the back of his forces, Morgan placed his best and most experienced fighters. There was no way the British would be able to panic this third line: they would hold until kingdom come.

But there was no reason Tarleton needed to know that, so Morgan told the third line to retreat a little when the British, exhausted after fighting their way through the first two lines, made it to them.

Tarleton And His Army Arrive 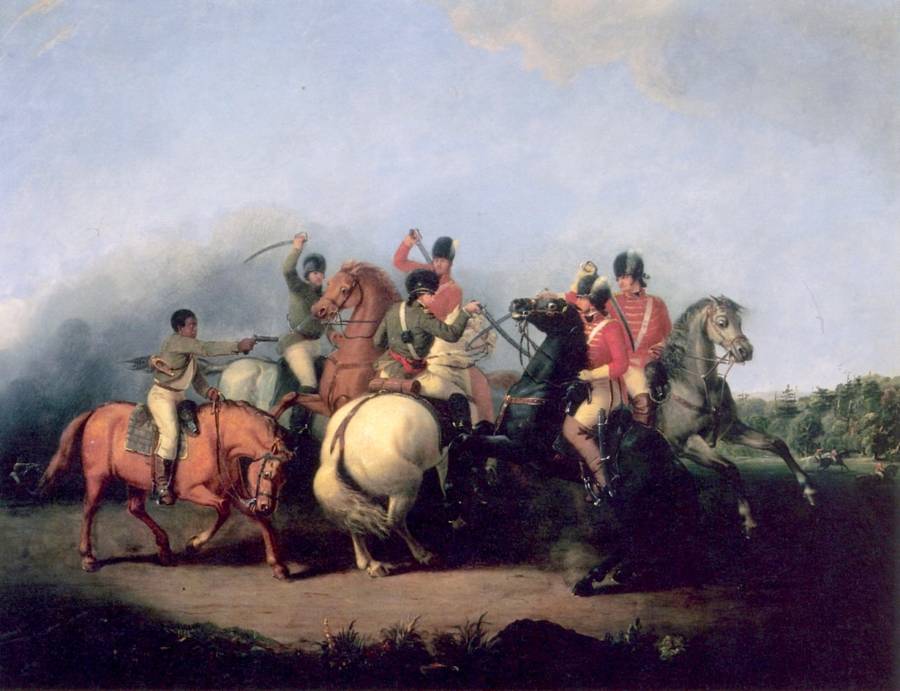 Wikimedia CommonsThe Battle of Cowpens, painted by William Ranney in 1845. The scene depicts an unnamed black soldier (left) firing his pistol and saving the life of Colonel William Washington (on white horse in center).

As the British army approached at sunrise, it was clear that Tarleton himself had already done some of the Americans’ work for them. Aware that Morgan’s troops would be trapped by the flooding river, he had driven his men hard to catch up.

They had not taken the time to re-provision on their march, which meant they were severely malnourished, and in the 48 hours leading up to the Battle of Cowpens, they had been granted just four hours of sleep.

But Tarleton smelled blood, and he was going in for the kill. Hot-headed as always, he did exactly what Morgan had counted on: he rushed directly at the center of the first American line.

When they retreated, he thought the entire force was fleeing, and he ordered his men deeper into the fray. That was when they ran up against the third American line.

The third line, like those before it, appeared to cut and run — so the British gave chase. They were just 30 yards away when the Americans suddenly turned and fired.

The effect was devastating. And when the earlier group of American fighters who had supposedly fled showed up behind them, most of the British troops fell to the ground in surrender. They had been caught in a double envelopment, the pincer that fighting forces dread.

In less than an hour, the battle was over, and Tarleton had fled.

The Aftermath Of The Battle 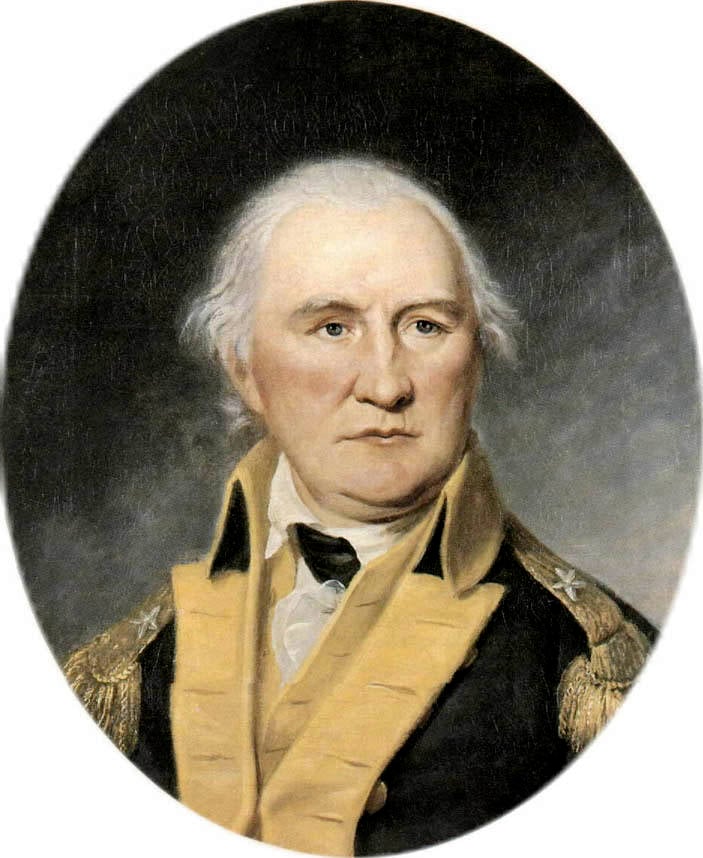 Wikimedia CommonsDaniel Morgan, the hero of the Battle of Cowpens, painted in 1794 by Charles Willson Peale.

In the end, 110 British soldiers had been killed, and 712 were captured by the Americans. Tarleton and his men were clearly finished; no longer would they pose a threat to any American force.

Worst of all for the British, Tarleton, then a young star on the rise, had been given the very best of the British fighters currently in the colonies. When British General Cornwallis heard the news of their loss, rumor has it that he accidentally snapped his sword in two.

Morgan was a hero, and the news of his victory gave new life to the beleaguered colonists of the Carolinas. They renewed their resistance, and the British army, though by no means defeated, was suddenly on the run.

In the following months, the need for a spectacular military success would prompt British forces into the unwise Battle of Guilford Court House, where the price of victory was devastating.

In October of that year, George Washington cornered the British at the Battle of Yorktown, which brought an end to the war.

The Battle of Cowpens changed the course of the Revolutionary War, and it’s remembered fondly in popular culture to this day. The Patriot, the 2000 film starring Mel Gibson and Heath Ledger, blends the Battle of Guilford Court with the Battle of Cowpens in a dramatic and imaginative reenactment of the final conflicts of the war. The character of Benjamin Martin was inspired by Daniel Morgan, a hero whose name is still remembered more than 200 years later.

After this look at the Battle of Cowpens, view these haunting photos of the Battle of Gettysburg. Then, take a look at some of the most incredible Civil War photos.