One of the recovered remains shows clear signs of a surgeon's bone saw cutting through it, likely performed while the Battle of Waterloo raged on. 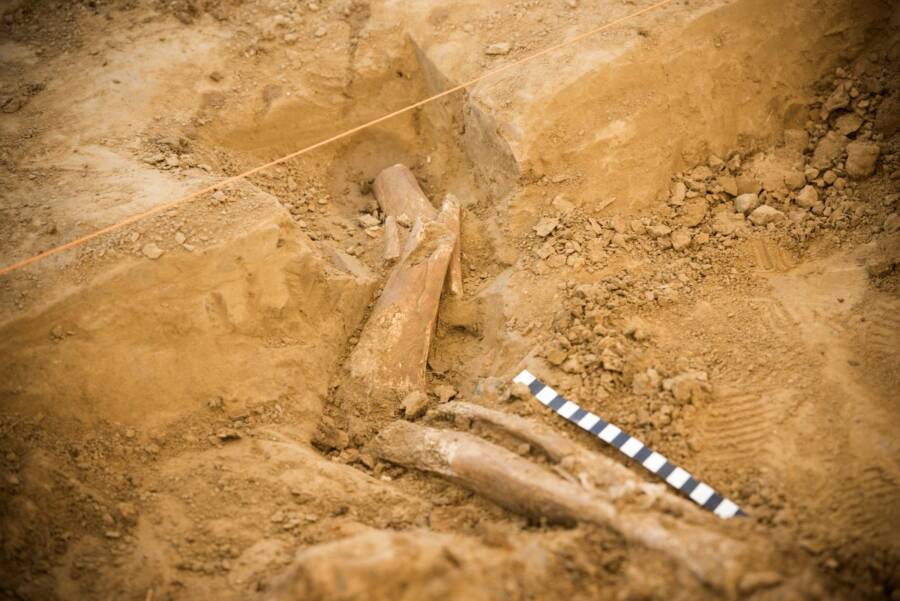 Waterloo Uncovered/Chris van HoutsUntil now, only one complete skeleton has been found at the site. Most fallen soldiers were either buried in mass graves or left on the field to decompose.

The Battle of Waterloo in modern-day Belgium was so bloody it left an estimated 7,000 Prussian, 15,000 Seventh Coalition, and 25,000 French casualties in its wake. According to IFL Science, only a single soldier’s complete skeleton has ever been found at the site in the last two centuries — until now.

It was June 18, 1815, when Napoleon Bonaparte’s French forces were defeated by the Duke of Wellington’s army of the Seventh Coalition alongside the Prussian army. Until now, only the complete remains of Private Friedrich Brandt, a German soldier, have been discovered.

Archaeologists from the Waterloo Uncovered project, however, recently found evidence of a field hospital on the Mont-Saint-Jean farm as well as several lower leg bones that were crudely amputated during the battle.

One of the legs seems to have suffered a “catastrophic wound,” while another shows clear signs of amputation from a surgeon’s bone saw. 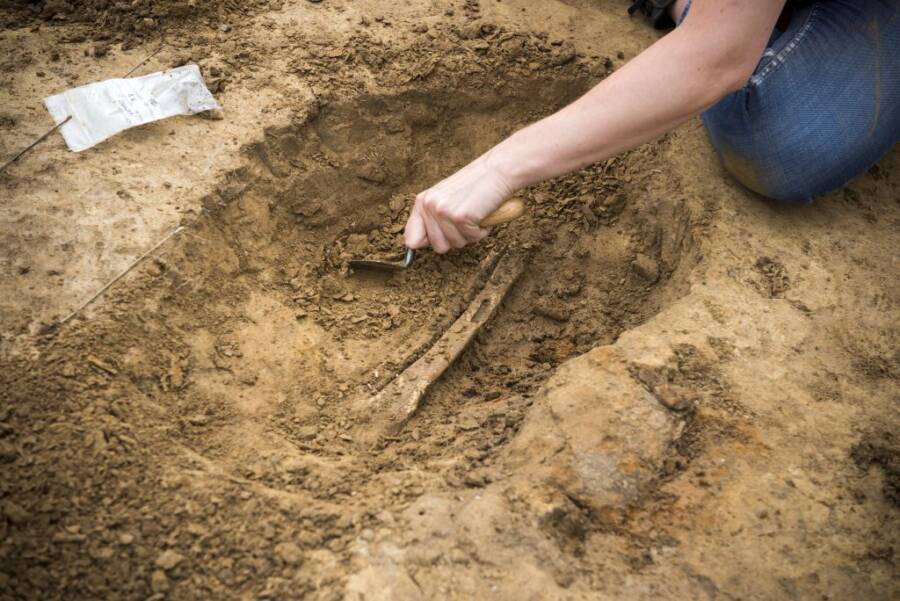 As the timeless axiom states, war is hell. This was arguably never clearer to those who were injured and had to receive amputations without anesthetic. It’s believed that up to 6,000 soldiers were treated at the Mont-Saint-Jean Field Hospital that provided them with “primitive care” intended to save their lives — but not their limbs.

It’s estimated that 65 percent of injuries at Waterloo were to limbs, from either cannonballs, musket balls, sabers, or lances.

“Finding human remains immediately changes the atmosphere on a dig,” said Professor Tony Pollard, the lead academic at Waterloo Uncovered. “Suddenly there is a very poignant connection with the people who suffered here in 1815, a connection that has not been lost on the Waterloo Uncovered team of veterans and serving personnel.”

The research team, indeed comprised of veterans, military personnel, and archaeologists, also found further direct evidence of the battle. Waterloo Uncovered dug trenches in the orchard formerly home to the field hospital and found a plentiful collection of musket balls used by both sides during the battle. 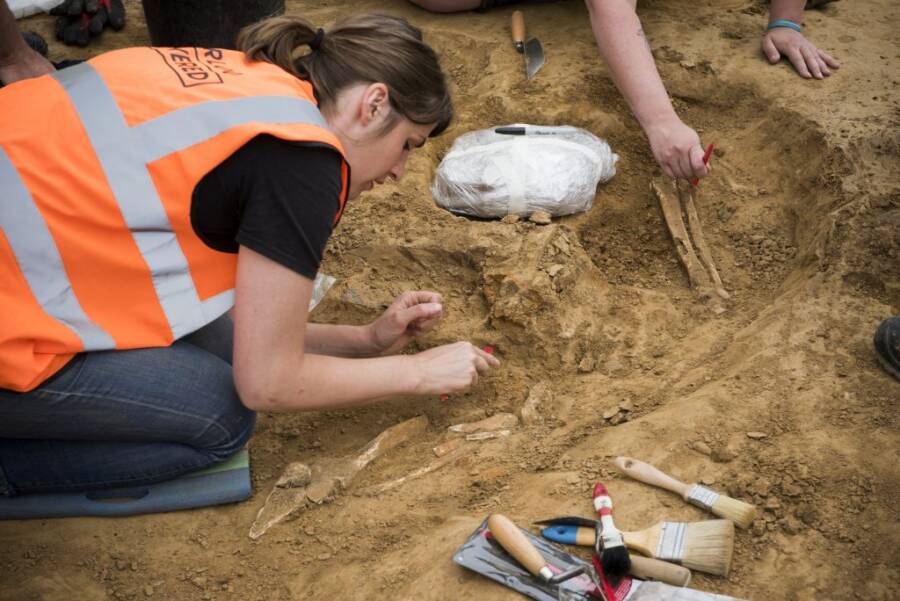 Waterloo Uncovered/Chris van HoutsOne of the leg bones showed clear signs of amputation, likely by a surgeon’s bone saw while the battle was in progress.

The organization uncovered 58 of these projectiles in a mere half-day, which led the team to believe a “fierce fight” definitely occurred on or near the dig site. “We’re finding evidence of a previously unknown action at the very doors of the Mont St. Jean Field Hospital,” said Pollard.

“Given that the farm lies about [1,900 feet] behind the main Allied line, we think that the musket balls relate to a cavalry action — French cavalry must have swept down the hill into the grounds of Mont St. Jean, where they were engaged by the defenders, and a firefight developed,” said Pollard.

In addition to numerous coins and buttons the team found that belonged to soldiers, a six-pound cast-iron cannonball was discovered. The Waterloo Uncovered project certainly seems to have brought more direct, primary evidence of the infamous battle to the forefront than any other organization in recent years. 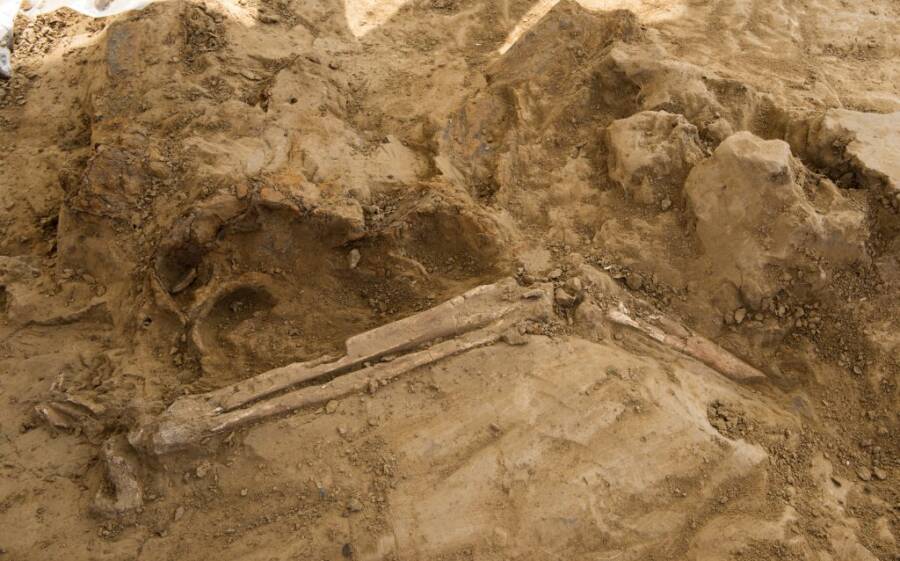 Waterloo Uncovered/Chris van HoutsOne of the leg is said to have suffered a “catastrophic wound,” and was amputated to save the soldier’s life. The remains are believed to have belonged to Allied soldiers.

According to The Telegraph, while the 25-person team has its share of veterans suffering from post-traumatic stress syndrome, war-centric archaeology is actually therapeutic in some capacities. Member Mike Greenwood, at least, has sincerely appreciated its calming effects on his mind.

“Archaeology, among a group of fellow servicemen and women, can be beneficial to veterans for a number of reasons,” he said. “It provides a supportive environment of likeminded people, especially when dealing in military history, and it allows them to see a broader context to their own service.”

“There is something about the practical process of archaeology which is meditative, even therapeutic.”

There are now three additional bones, dozens of musket balls, coins, and buttons that can be added to the historical remnants of the Battle of Waterloo. There’s no telling what else this team will find, but as it stands, the Waterloo Uncovered project is ready to find out.

After learning about the newly-discovered amputated bones shedding new light on the Battle of Waterloo, take a look at these Battle of the Bulge photos that capture the Nazis’ brutal last-ditch counteroffensive. Then, learn about the newly uncovered diaries that reveal the horrors of cannibalism during the Nazi siege of Leningrad.