In conducting research for her new book, professor Alexis Peri came across some disturbing new information about the siege of Leningrad. 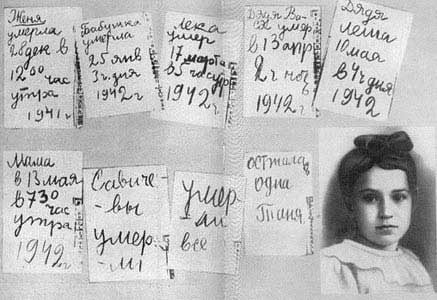 Wikimedia CommonsThe diary of Tanya Savicheva, a girl of 11, her notes about starvation and deaths of her sister, then grandmother, then brother, then uncle, then another uncle, then mother. The last three notes say “Savichevs died”, “Everyone died” and “Only Tanya is left.” She died of progressive dystrophy shortly after the siege.

It’s always been known that the 872-day Nazi blockade of Leningrad caused famine, widespread suffering and millions of deaths.

But recently uncovered diaries shed a disturbing new light on this horrific chapter of history — describing in wrenchingly personal detail the desperate lengths people would go to keep from starving.

Alexis Peri, a professor at Boston University who compiled the diaries for her upcoming book, The War Within: Diaries From the Siege of Leningrad, came across them while interviewing WWII survivors who had been children during the war.

“They all gave me the same story — this heroic, triumphant battle, human resistance, collective solidarity,” Peri told the Guardian.

The survivors would then begin to trust her, she said, and give her old family documents — like letters and diaries.

“What fascinated me was that the diaries were so different from the stories I was getting,” she said. “Even when they were from the same people. A diarist would give me the diary and then say something like: ‘I doubt there’s anything of interest in there, anything different from what we’ve already told you.’ But it was dramatically different.”

In these pages — written without the benefit of assured survival and decades of reflection — the pride faded. Everything faded but hunger.

“I am becoming an animal,” one teenager, Berta Zlotnikova, wrote. “There is no worse feeling than when all of your thoughts are on food.”

The German siege of the city now known as St. Petersburg began in September 1941. On Hitler’s orders, palaces, landmarks, schools, factories, roads and hospitals were destroyed. The water supply was cut off and extreme famine spread.

Aleksandra Liubovkaia, who wrote that she felt like Mary washing Jesus when she bathed her emaciated son, described her shock that men and women had become “so identical… Everyone is shrivelled, their breasts sunken in, their stomachs enormous, and instead of arms and legs, just bones pole out through wrinkles.”

Faced with this hell, many used desperate means to stay alive.

One girl wrote that her father had eaten the family dog. About 1,500 Leningrad residents were arrested for cannibalism.

One woman described neighbors who had turned to the practice. She tried to take the children out of the home, but said they “did not want to leave their uncooked meat.”

Peri felt that it was important to tell this personal, civilian side of the story, which is typically overlooked in favor the heroic, battlefront narrative.

These diarists weren’t concerned about the war, the Nazis, or national pride and solidarity. They were starving. 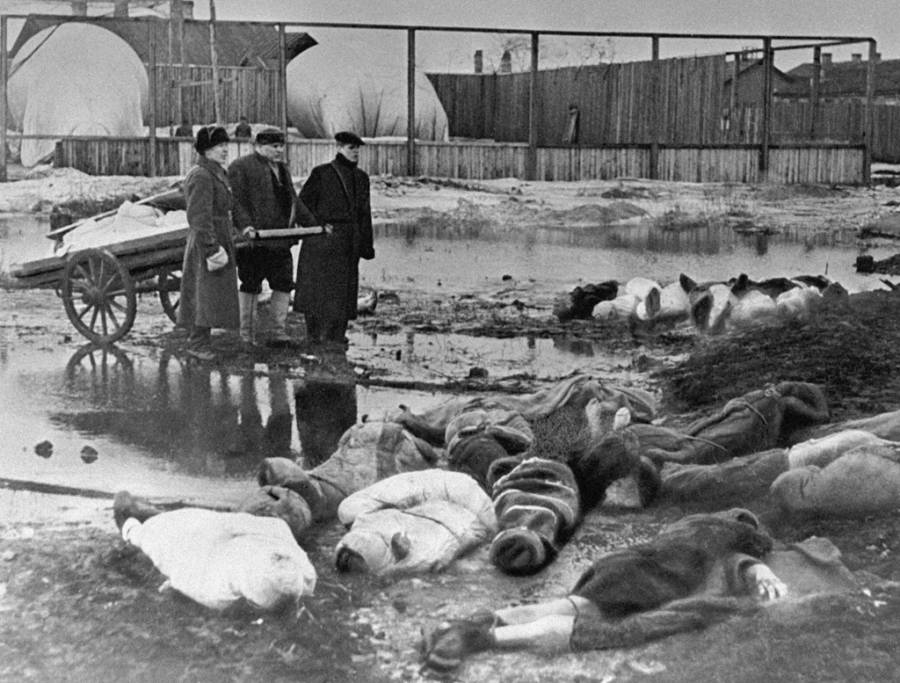 Wikimedia CommonsThree men burying victims of the siege in 1942.

“What comes over most of all is the way that starvation is this particularly tormenting form of dying, that not only forces the body to feed on itself and destroy itself, but wreaks havoc on the mind and destabilizes all kinds of assumptions, relationships and fundamental beliefs,” Peri said.

“There are many scenes with a diarist confronting themselves in the mirror and being unable to recognise themselves … It’s the type of death that really creates that type of internal destabilisation, as opposed to diaries that I’ve read from battle sites – the battles of Moscow and Stalingrad, where there’s a very clear enemy and that enemy is an external one. With starvation, the enemy becomes internalised.”

About 2 million people would die in the siege on Leningrad, including 40% of the city’s civilian population.

Next, read the story of the teenager who saved dozens of Jews from Nazi death squads. Then, learn about the American arm of the Nazi party before and during WWII.