Thailand's in the middle of its worst drought in 10 years. The silver lining? A long-hidden temple has reemerged. 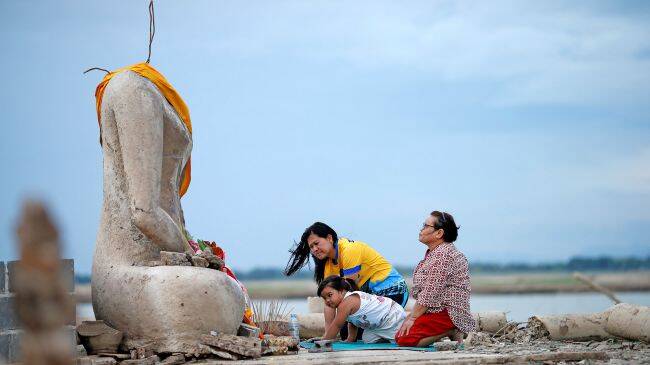 TwitterA 13-foot headless statue of Buddha has been underwater from 20 years. Now, visitors have adorned it with flowers and flock to it to pray.

Thailand is currently undergoing its worst drought in over a decade, with some regions experiencing their worst drought in living memory. But now there’s a bit of a silver lining to this extreme climate — an underwater temple reemerged earlier this month after being underwater for 20 years.

The long-lost temple and its surrounding village were submerged in 1999 by the construction of a dam. Their sudden reappearance has attracted thousands of tourists, as well as former residents who can still remember their childhoods there, to celebrate the resurrection.

People from all walks of life have journeyed to the Buddhist Wat Nong Bua Yai temple, many of whom have prayed in front of and placed flowers atop a 13-foot-tall headless Buddha statue. Most striking are the former residents who are seeing the ruins of their childhood homes for the first time in decades.

“When I was young, I always came to meet my friends at the elephant sculptures in front of the main building to play there,” said Yotin Lopnikorn, who lived in the village in his youth.

The Buddhist temple once served as a popular meeting place and de facto center of community for people from several surrounding villages. From casual hanging out to organized rituals and festivities, Wat Nong Bua Yai has been in the memories of thousands — who are now seeing it for the first time in decades.

According to MSN, all of the pillars, stone steps, shrines, and general remains of the temple have brought these memories flooding back for countless visitors. Apichai Sanidpol, at least, was emotionally affected by the sight, and grateful for the opportunity to see it again.

“I knew what the temple was like when it was open,” said Sanidpol. “It was very special and always busy. My family came here. When there’s lots of rain again the temple will be covered with water again. We might never have a chance to see it again, so everybody is visiting and praying for good luck.”

According to the New York Post, the temple’s remains have been revealed before, during a particularly harsh drought season in 2015. This year, however, the drought’s even worse. According to the Thai Meteorological Department, the reservoir that was keeping the temple underwater is now at 3 percent capacity.

This widespread dehydration has a lot of other reservoirs across the country sitting between 20 and 40 percent of their capacity. The Mekong River, on Thailand’s eastern border with Laos, is currently at its lowest level in nearly 100 years.

“This is the second time I have seen this temple in this condition,” said Lopnikorn. “Now I think we need to save this place.” 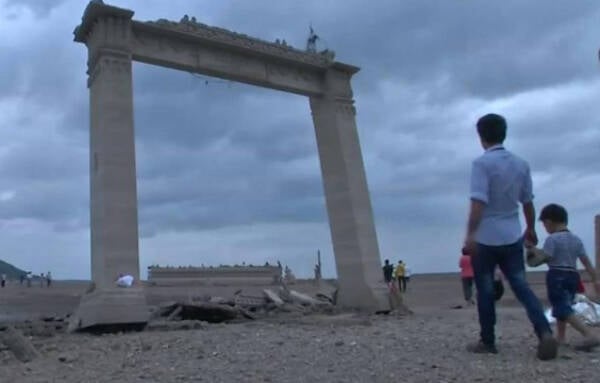 Screengrab/Daily MailThe reemerged ruins include shrines, pillars, stone steps, a headless statue of Buddha, and more. The temple’s reappearance is arguably the only silver lining to Thailand’s severe drought.

At this time of year, Southeast Asia usually undergoes monsoon season. The typically wettest season of the year has frustratingly left people like rice farmers out to dry. These people — and those they feed — rely on reservoirs to flood their paddies, and are currently suffering thoroughly from the lack of rainfall.

The Thai government requested that farmers delay planting rice back in May, in order to wait for rain. But it never came. As a result, the government has been seeding clouds, or releasing chemicals into the air so clouds can condense, to bring about even just a little rainfall and alleviate some of the substantial economic hardships farmers have been forced to endure all these months.

“The temple is normally covered by water,” he said. “In the rainy season you don’t see anything.”

The reservoir typically irrigates more than 1.3 million acres of farmland across four provinces. This year’s drought is so severe that only 3,000 acres in the single province of Lopburi have been irrigated.

A report published earlier this year by the United Nations Economic and Social Commission of Asia and the Pacific explained that the risk of droughts isn’t lessening anytime soon, either.

“The area affected by drought is likely to shift and expand,” the report said. “There will be many more dry years ahead.”

After learning about the reemergence of the Buddhist Wat Nong Bua Yai temple due to Thailand’s historic drought, read about the amazing sunken cities of the ancient world. Then, learn about human activity in North America 115,000 years earlier than we thought.