The ministries of televangelist Benny Hinn rake in some $100 million a year. Hinn claims all that money goes into his healing services, but he does own a private jet.

In 1994, boxing champion Evander Holyfield stood in front of a crowd who had gathered to witness the miracles of televangelist Benny Hinn. Before Hinn and the crowd, Holyfield begged for God’s healing. He had just been diagnosed with a condition in which the left ventricle of his heart could not work properly and so his blood struggled to pump.

A wave of Hinn’s hand did what countless heavyweights had been unable to do and knocked Holyfield to the ground. Holyfield reported a warm feeling flood his chest as he collapsed. He heard Hinn turn to the cheering crowd: “The lord is telling me now: he is repairing Holyfield’s heart completely.”

Benny Hinn heals the heart of Evander Holyfield on stage so that the boxer could later take on Mike Tyson. Holyfield beat Tyson the following year.

When Holyfield returned to the doctors, his heart was indeed pumping once more. Although doctors reported that he’d been misdiagnosed, Holyfield credited no one but Benny Hinn for his return to the ring. Holyfield was so thrilled that he even agreed to write Hinn a check for $265,000, needed, as Hinn told him, to “underwrite the costs of the crusade.”

This was hardly the first time Benny Hinn had performed a miracle — and hardly the first he had been so generously compensated for one. Millions had packed stadiums and millions more tuned in to Hinn’s show “This Is Your Day” as he demonstrated what many believed was his God-given power to heal.

Benny Hinn, as far as his followers were concerned, was a prophet of the Lord. But could it be that the faith healer is really a con man?

Benny Hinn was born Toufik Benedictus Hinn in Jaffa, Israel in 1952. He and his seven siblings moved to Toronto in 1968 where Hinn’s career in the divine began. Despite opposition from his family, Hinn fell into a religious crowd and converted to Born Again Christianity at 18.

Hinn claimed he was a social outcast for much of his early life, but journalists later debunked this self-made myth. It would be one among a million little lies Hinn delivered in order to craft his persona.

At 21, he went to see faith healer Kathyrn Kuhlman live on stage. There he assisted a crippled old woman to the show and claimed to witness her “untwist” as she was healed by Kuhlman. Hinn was so inspired that modeled much of his later career off of Kuhlman’s methods. 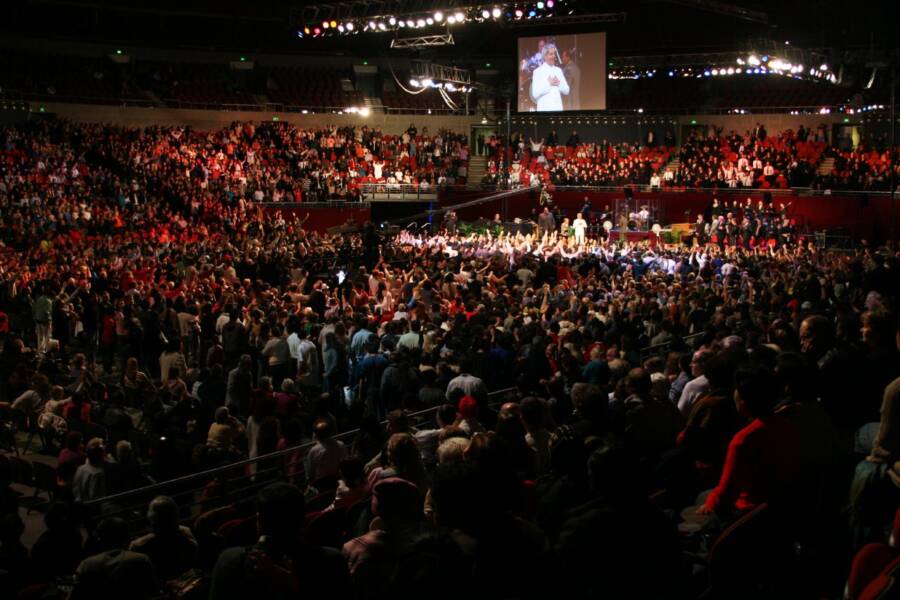 FlickrHinn claims his gift for healing came to him at 11 or 18. The details of his past vary even by Hinn’s own accounts.

From his home in Toronto Hinn began to televise his first healing sessions on local stations. When he traveled to Florida and met married his first wife, Suzanne, the daughter of a pastor, Hinn established his first evangelical congregation in 1983.

His reputation exploded. By 1990, Hinn’s program, “This Is Your Day,” aired daily on the Christian TV network.

Hinn was a national sensation. Here’s a recording of his work in South Africa in the 1990s.

Not everyone, though, shared Holyfield’s great experience with Hinn.

When one woman, Ella Peppard, went to Hinn for healing, he didn’t just fail to heal her. He caused her death.

While Peppard was waiting her turn, Benny Hinn struck another man in the head and cried out that the had been “slain of the spirit!” The man fell back and toppled over Peppard, who then crashed down onto the stage shattering her hip.

Hinn’s staff didn’t call an ambulance, and Peppard, believing that Hinn’s healing powers would take care of her, didn’t bother seeing a doctor. The fracture in her leg got worse and blocked her arteries and, 15 days later, Peppard died. 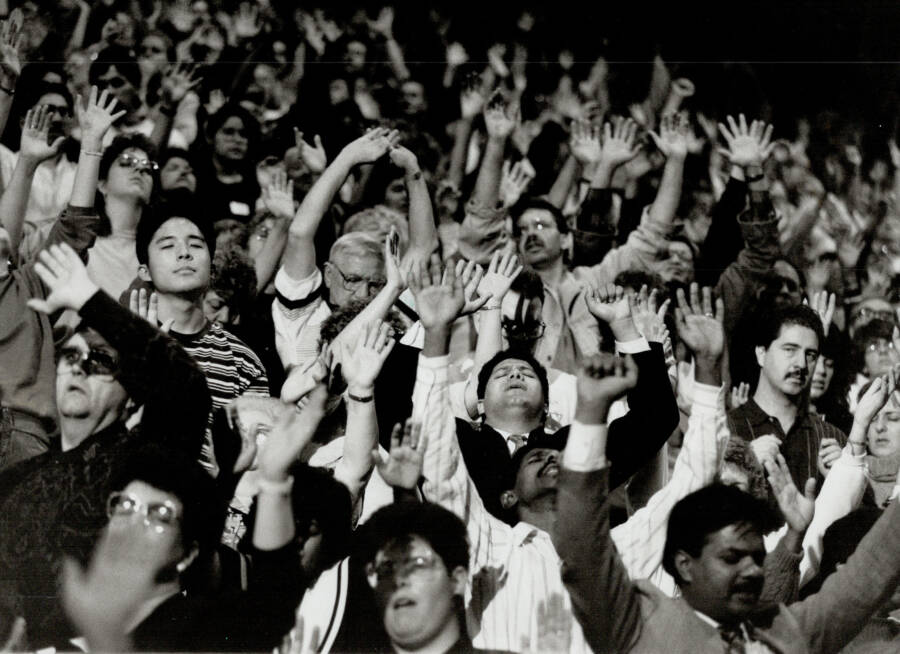 Tony Bock/Toronto Star via Getty Images“I don’t get a cent of this offering,” multi-millionaire Benny Hinn said before ushers passed white buckets through the Maple Leaf Gardens crowd in Canada.

She wasn’t the only person to die after Benny Hinn’s Revival, either. In 2001, an HBO documentary crew followed seven of the people Hinn claimed to have healed to see what happened to them. In every case, Hinn’s healing powers were short-lived.

One of the women they followed was so convinced that Benny Hinn had cured her of lung cancer that she refused to ever see her doctor again. But the cancer was still there, a left untreated, killed her within a year.

The director, Anthony Thomas, came to this grim conclusion:

“If I had seen miracles, I would have been happy to trumpet it, but in retrospect, I think they do more damage to Christianity than the most committed atheist.”

The Power Of God Or The Placebo Effect?

In 1999, the show The Fifth Estate managed to interview one of the men Benny Hinn hired to screen the people he cured on stage. He explained the process they used to keep the truly sick from ever making it onto the stage:

The only people allowed on stage with Hinn were those with psychosomatic problems or physical pains that could be temporarily dampened through the euphoria of believing that they were having a religious experience before a cheering crowd.

Hinn’s nephew goes on a radio show to discuss his problem with the fortune his uncle has made.

To test the information that the guard at given the Fifth Estate, the crew snuck a hidden camera on a young girl with cerebral palsy and tried to get her on stage.

As told, security guards swarmed the sick little girl and physically restrained her from approaching the man who claimed he could make the lame walk.

Officially, Benny Hinn leads a non-profit religious charity. Every penny of the $100 million he brings in each year, he claims, is put toward the church and his healing services.

The Fifth Estate also uncovered Hinn’s hotel bills from a layover in London. In a single night, he’d racked up over $4,000 in hotel bills, and he’d left the concierge and the bellmen a $2,000 tip.

The $6,000,000 he was asking for didn’t even reflect the full cost of the jet. It would only cover part of the down payment.

This spending was enough to raise a few questions. In 2007, Senator Charles Grassley ran an investigation into Hinn and five other non-profit religious leaders who’d registered for the right to keep their finances tax-free and lived in multi-million dollar homes.

Hinn was one of the few who gave up his financial records – but before he did, he told the Senate hearing that he would need a year to get them ready. Since he was registered as a tax-exempt religious charity, the Senate couldn’t rush him.

The books they finally received didn’t reveal enough to press charges against Hinn. Grassley was forced to drop his investigation. 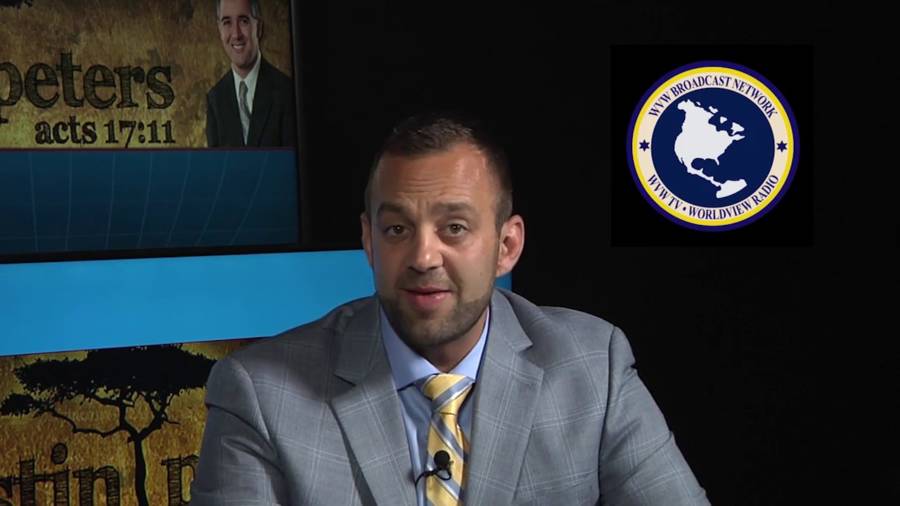 In recent years, Benny Hinn’s nephew Costi Hinn has publicly discussed what it’s like to follow the faith healer on his tours around the world — and to benefit from his fame.

“We lived the dream. Expensive hotels, car, travel. The biggest being that ‘Jesus provided all of that.'”

As a child, Costi Hinn “reported to Faithwire in 2018, that he accepted this life of luxury as something his family had earned. They were servants of God, he believed, and they were being rewarded with wealth from heaven.

But his faith was shaken when, for the first time, he saw a young girl his uncle promised to heal hadn’t gotten any better at all.

“They brought her to the back. We prayed for her, my uncle prayed for her. I was bawling my eyes out later that night saying ‘God why didn’t you heal her?! Everyone was supposed to get healed.”

For Costi Hinn, it was enough to shatter his faith. He gave up on his family’s brand of Charismatic Christianity and paved his own path, away from the faith healings and the mansions bought from religious donations.

Millions more still attend Benny Hinn’s Revivals, praying that he’ll bring the Holy Spirit upon them and heal them of the illnesses, and countless people still insist that Hinn’s powers really did heal them.

Benny Hinn has never been proven a fraud, and though the IRS has investigated him many times, no charges have ever been filed against him.

Until anything is proven for sure, it all comes down to a question of faith.

Next, find out about the televangelist who asked his followers for a $54 million jet or learn about Braco, the man who claims he can heal people by staring at them.