Meet The Berbers Of North Africa: The Nomads Who Survived Where No One Else Could

The Sahara was once a grassy woodland until human activity and a changing climate turned it into the immense desert we know today. The Berbers were the only people who decided to call it home.

There are some places on Earth that seem like they couldn’t support human life and yet somehow people manage. Like the people indigenous to North Africa who had no choice but to develop ingenious methods of survival: the Berbers.

Constrained by the Sahara Desert, the Berbers developed into one of the most unique cultures in human history.

But their inhospitable environment was not their only source of conflict. Today, the pressures of modernity and ethnic repression also encroach on the Berber’s lifestyle.

A Brief History Of The Berbers

The Sahara Desert stretches from the Atlantic Ocean on the West coast of Africa to the Red Sea on the East coast. It’s an unforgiving expanse of sand and rock that doesn’t lend itself to human habitation. But the Sahara wasn’t always a desert. It was once a grassy woodland until humans brought grazing animals, which, combined with a changing climate, turned the area into the inhospitable place it is today.

As the land changed, people moved on. But the pre-Arab ancestors of the Berbers had a different idea. Instead of avoiding the Sahara, they actually moved into the desert and found a way to thrive where most couldn’t. 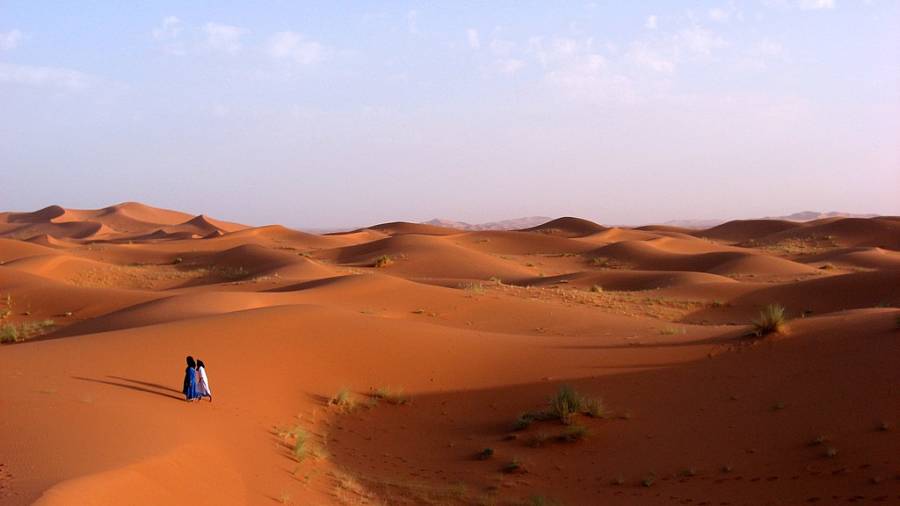 Wikimedia CommonsA pair of Berbers trekking through the Sahara desert.

The earliest evidence we have of the Berbers shows that they are descended from Stone Age tribes that lived around the coast of North Africa sometime around 5,000 BCE. As these tribes of people united by similar languages mingled together, they established a common identity that became the basis for the Berber culture.

The word “Berber” itself probably comes from the Egyptian term for “outsider,” which was adopted by the Greek to become “barbari,” which morphed into the Western word “barbarian.” The Greeks used the word like the Egyptians, as a general term for foreigners, but the Berbers referred to themselves as the “Amazigh,” or “free men.”

The Berbers interacted with other major civilizations in the North African region for centuries. In particular, they were subjugated by the Phoenicians and Carthaginians — two powerful Mediterranean civilizations — as well as various Arab kingdoms. At other times, they established powerful kingdoms that vied for control over North Africa, like Numidia.

In fact, Numidia remained a major regional player until the first century BCE when it became a client state of Rome. Following the fall of Rome, Berber kingdoms again came to control much of northwest Africa. Berber sultanates would even come to dominate parts of Spain.

Through it all, the Berbers would receive new cultural influences from the lands they ruled and the people who ruled them. Yet, they managed to hold on to a distinctive way of life that made them one of the most unique people in history.

The Berber Way Of Life 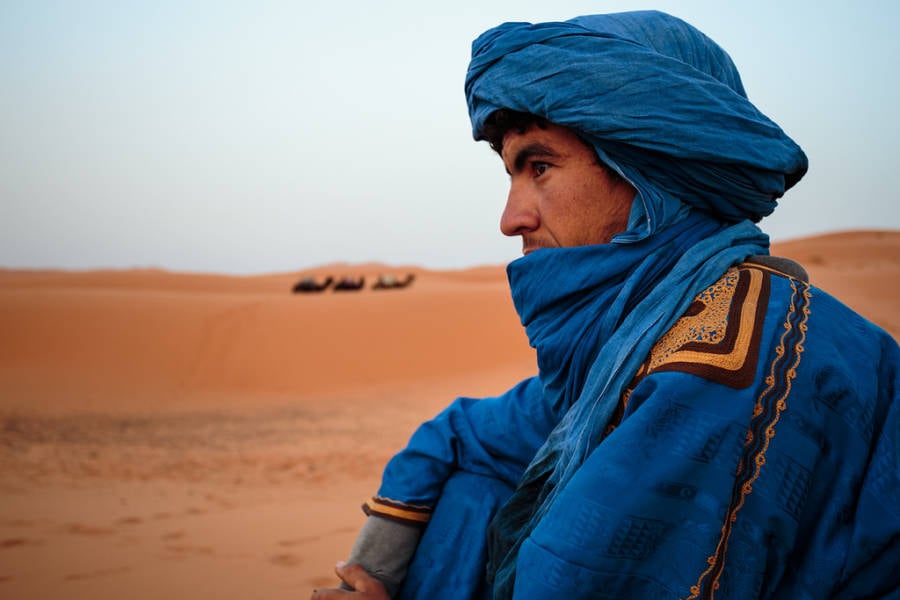 Mr Seb/FlickrA man dressed in the characteristic blue robe of the Berbers.

The harsh environment of the Sahara desert prevented any serious attempts at agriculture from taking root. Because of this, the Berbers chose instead to live as nomads rather than sedentary agrarians. This mobile lifestyle is central to their culture, and perhaps the real reason why they referred to themselves as “free men.”

The Berbers survived by raising herds of grazing animals and driving them from place to place. Herding was traditionally practiced by men, while women handled chores like weaving their distinctive blue robes. Although they used many different animals, including horses, the key beast for the Berbers was and is the camel. Unlike horses, camels can survive without water for long stretches of time. The camel’s endurance made it possible for the nomadic Berbers to ride across vast expanses of desert.

Traditionally, Berbers used their unique ability to cross the Sahara to act as key players in the trade network between North Africa and the Middle East. Even today, Berber trade caravans make their way across the desert to support their way of life.

Another way their harsh environment has influenced their culture is navigation. Indeed, it is quite difficult to find one’s way through the featureless sand-dune terrain of the Sahara Desert. For this reason, much like sailors have done on the open seas for thousands of years, the Berbers navigate by the stars.

In addition, Berbers have many stories and songs that describe how to find the small watering holes and the few recognizable landmarks that dot the desert. 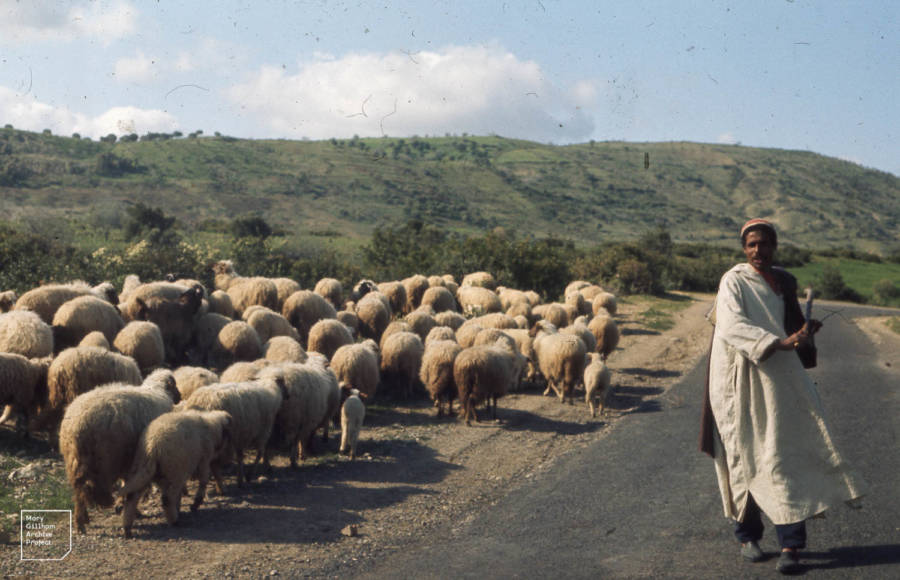 In terms of religion, the vast majority of Berbers are Muslim and have practiced their faith for centuries. But there are some unique aspects of their culture that has survived the introduction of new and different religions, especially when it comes to women.

For example, unlike many of their settled neighbors, Berber women rarely wear veils and in some of their communities, women even choose their own husbands.

Berber society is centered around the concept of the tribe, which is usually composed of extended family clans. Each tribe has its own chief who often claims to be a descendant of the Prophet Mohammad. The chief is in charge of dispensing justice and resolving disputes as well as making important decisions for the tribe.

Similar to other nomadic cultures, Berber clans live in portable tents that are set up when they find a good area to graze their animals. One particularly unique part of Berber culture is guest rights. Once someone is given food and water by a Berber, they become their guest. The host then takes responsibility for the guest’s safety.

This may seem strange from a Western perspective, but in a place where finding a place to rest and a drink of water is a matter of life and death, hospitality is very important. 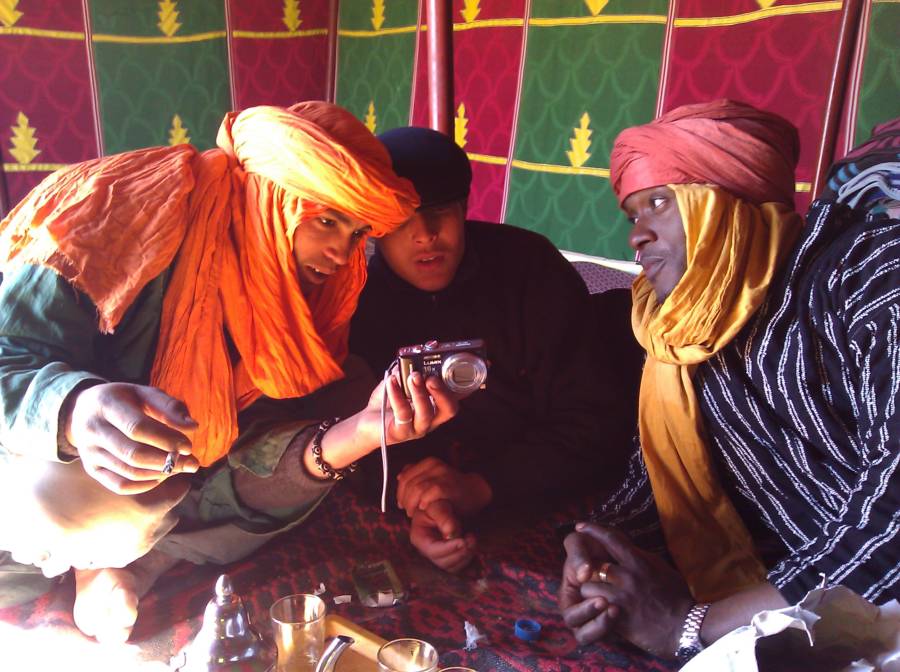 Wikimedia CommonsBerbers in traditional dress curiously looking at a camera.

Today, most Berbers who still speak the Afroasiatic Berber language live in Morocco, Algeria, Libya, Tunisia, northern Mali, and northern Niger, though there are also smaller sections of them spread across Mauritania, Burkina Faso, and Siwa town in Egypt. Based on their nomadic history, it doesn’t seem so surprising that the Berbers have managed to persist across Northern Africa.

But the struggle between the modern and the traditional way of life has been a significant issue for Berbers in recent years. Like many indigenous and traditional peoples, they have increasingly gravitated to larger cities where they can find work to support their families. This has had a clear negative effect on the continuation of their unique nomadic lifestyle.

But that’s not the only source of conflict. Perhaps the biggest threat to the Berber way of life has been persecution by Arab groups. In fact, they have been oppressed by the Arabs of North Africa for centuries.

In Libya, for example, infamous dictator Muammar Gaddafi brutally suppressed the Berber identity under the justification that all Libyans were Arab. The Berbers were expected to speak Arabic and abandon their nomadic lifestyle. Meanwhile, children given Berber names were forced to change them to Arabic ones.

Even in Morocco and specifically the High Atlas mountains, which has the largest Berber community in North Africa, Arabic remains the primary form of communication whereas Berber is mostly spoken only in vernacular settings.

These sorts of pressures have made it difficult for the Berbers to maintain their unique identity and avoid being assimilated by their Arab neighbors. But it has also caused a resurgence of their culture, highlighted by the increasing appearance of Berber-language newspapers and identity movements that are trying to establish a future for their traditional way of life.

The Berbers have endured for thousands of years and with a little luck and that perseverance they are so accustomed to, they’ll survive for thousands more.

Next, read about just how big the continent the Berbers call home is. Then, check out some amazing photos that show how Africa’s climate continues to change.