Berserkers were among the most feared Norse warriors of their age, ingesting hallucinogens to induce a trance-like fury that carried them through battle. 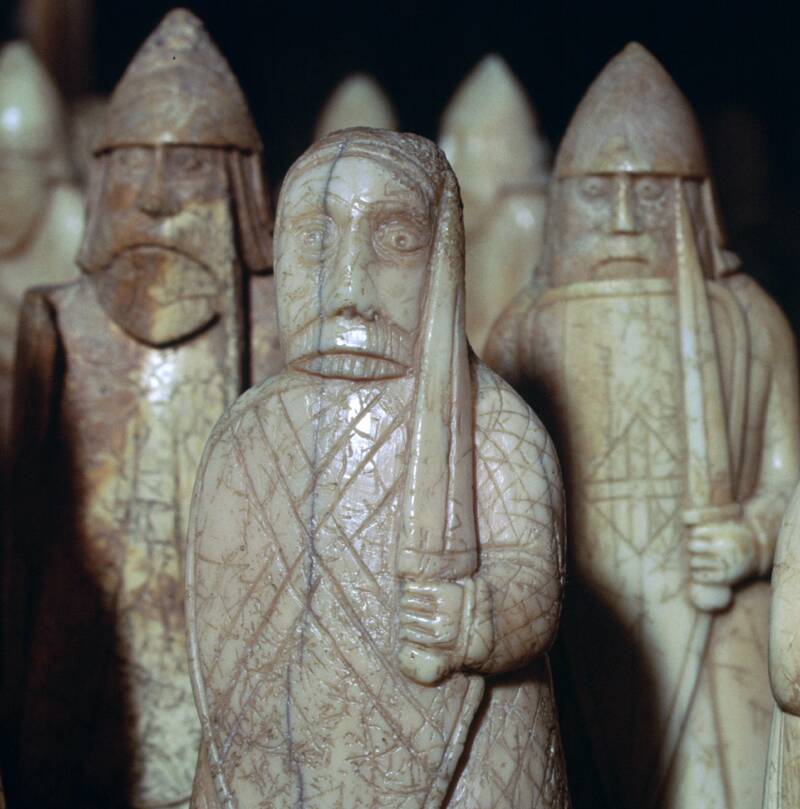 CM Dixon/Print Collector/Getty ImagesThe Lewis Chessmen, discovered in Scotland but believed to be Norwegian, date to the 12th century and include a number of pieces showing wild-eyed berserkers biting their shields.

In the fierce warrior culture of the Vikings, there was one type of elite, almost possessed, norse warrior that stood out for their battle fury and violence: the Viking berserker.

They were careless in their fury, leading many historians to think that they used mind-altering substances to hype themselves up for battle. Berserkers may have felt as though nothing could hurt them. And the English phrase “berserk,” usually describing a frenzied state of anger, comes from these Norse warriors.

Viking berserkers existed as mercenaries for hundreds of years during the Scandinavian Middle Ages, traveling in bands to fight wherever they could get paid. But they also worshiped Odin and were associated with mythological shapeshifters.

And eventually, Norse berserkers became so fearsome that they were entirely outlawed by the 11th century.

What Is A Berserker? 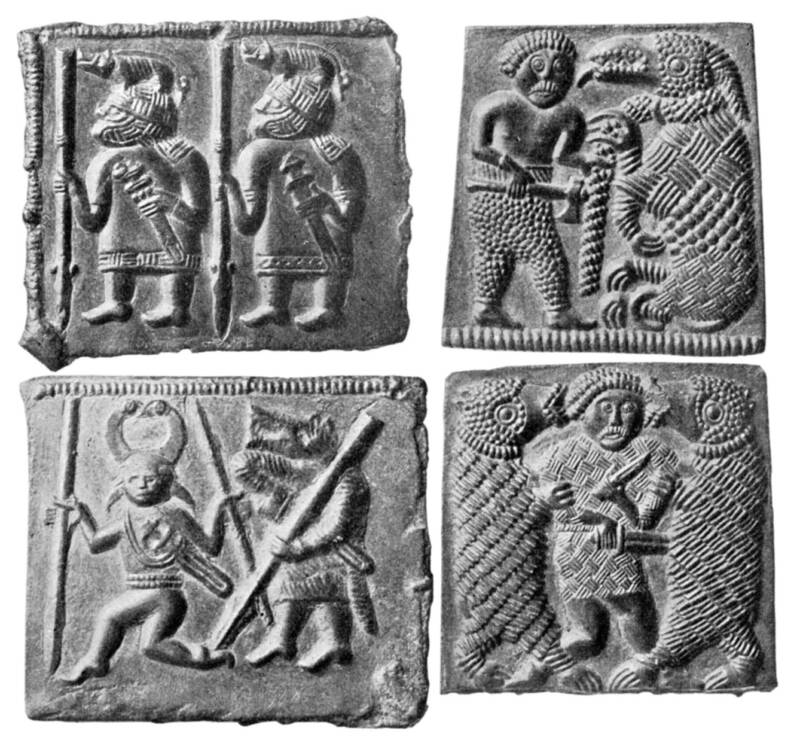 Public DomainThe Torslunda Plates, which were discovered in Sweden and date to the 6th century, likely depict how berserkers would have dressed in battle.

Most of what comprised the life of a Viking berserker is a mystery because their practices weren’t recorded in detail until the using mind-altered states in battle had been outlawed by the Christian church.

At this time, Christian writers on a mission to condemn any sort of pagan traditions often gave biased, altered accounts.

We do know that berserkers were inhabitants of Scandinavia. It’s written that they guarded Norway’s king Harald I Fairhair as he reigned from 872 to 930 A.D.

They also fought for other kings and royal causes. Archaeological findings from the time when a Viking berserker would have reigned supreme show that they were among elite warriors who were wild and reckless when fighting battles. 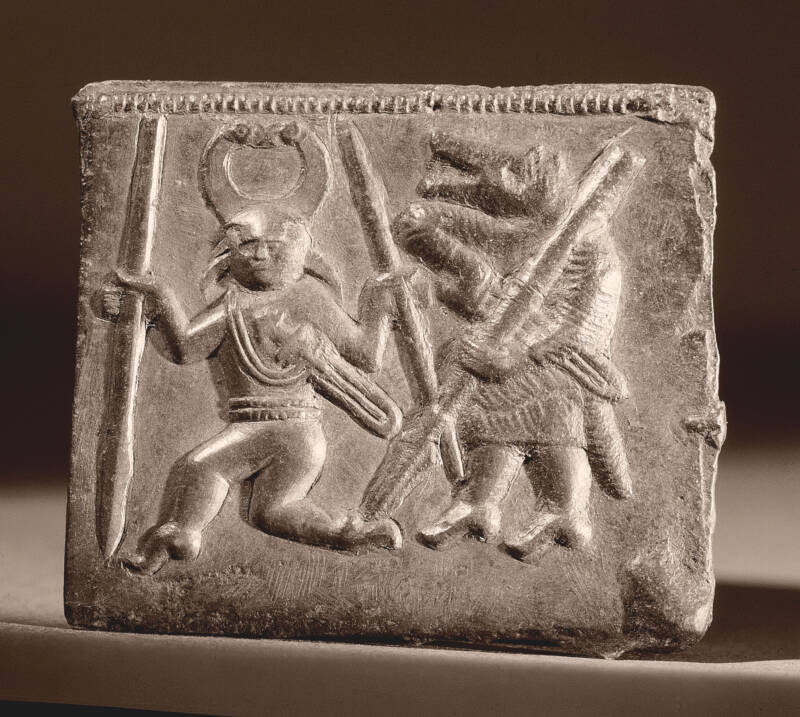 Werner Forman/Universal Images Group/Getty ImagesA detail of one of the 6th-century Torslunda Plates found in Sweden. It is believed to depict Odin wearing a horned helmet and a berserker wearing the mask of either a wolf or bear.

According to Anatoly Liberman in Berserks in History and Legend, the berserkers roared and otherwise made a lot of noise when in battle. One artistic depiction of the berserkers found in Tissø, West Zealand, showed them wearing a horned helmet.

Although now dismissed as a legend, some literature of Norse mythology suggests that a Viking berserker was actually a shapeshifter.

The word “berserker” itself is derived from the Old Norse serkr, meaning “shirt,” and ber, the word for “bear,” suggesting that a Viking berserker would have worn the hide of a bear, or possibly wolves and wild boars, to battle.

But, rather than wearing the skins animals, the stories told of the Norse warriors who would be so enraged for war that they would literally become wolves and bears to win the battles before them. 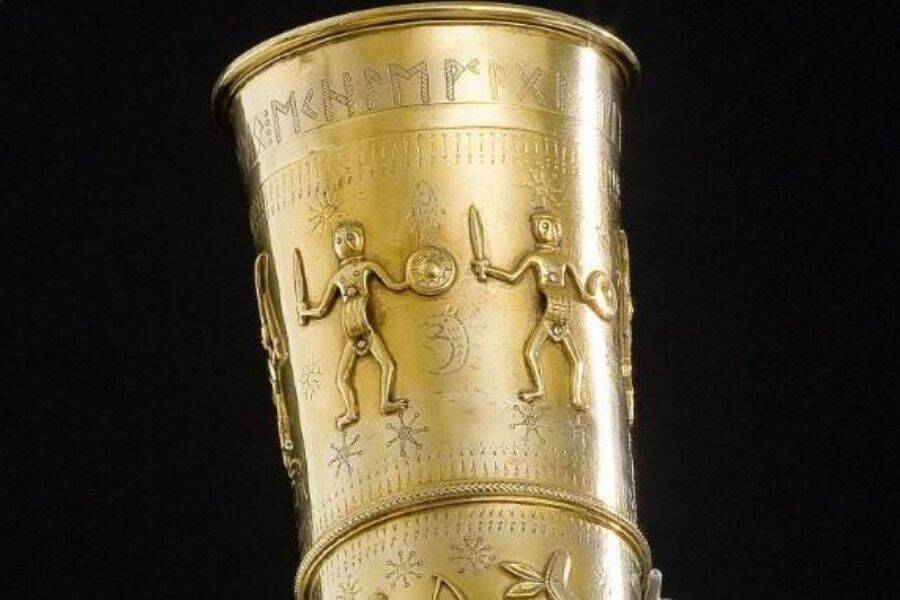 National Museum of DenmarkImagery of berserkers often depicted them semi-nude, like on this 5th-century golden horn discovered in Møgeltønder, Denmark.

Berserkers were originally thought to be named after a hero in Norse mythology who fought without any protective gear or “bare skinned.”

“The nakedness of the berserkers was in itself a good psychological weapon, because such men were naturally feared, when they showed such disregard for their own personal safety,” according to the National Museum of Denmark.

“The naked body may have symbolized invulnerability and was perhaps displayed to honor a war god. The berserkers were thus dedicating their lives and bodies to the battle.”

Although this imagery is fascinating, experts now think that the term comes from wearing bear skins instead of “bare skin”. So, it’s likely that they got their name from wearing animal skin in battle. 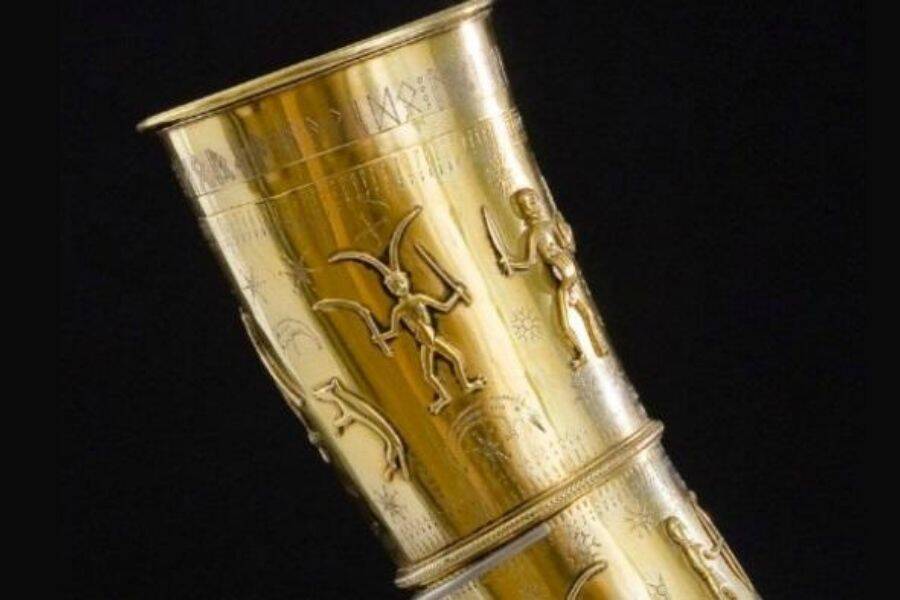 National Museum of DenmarkA depiction of a berserker wearing a horned helmet found on a 5th-century golden horn discovered in Møgeltønder, Denmark.

They might have also thought that it helped them channel the aggression and brutality that hunting animals have when going after their prey.

These showed the berserkers with armor. Still, other depictions show them naked. Nude warriors who are believed to symbolize Viking berserkers are seen on golden horns on display at the National Museum of Denmark.

The Mind-Altering Substance Used By The Berserkers 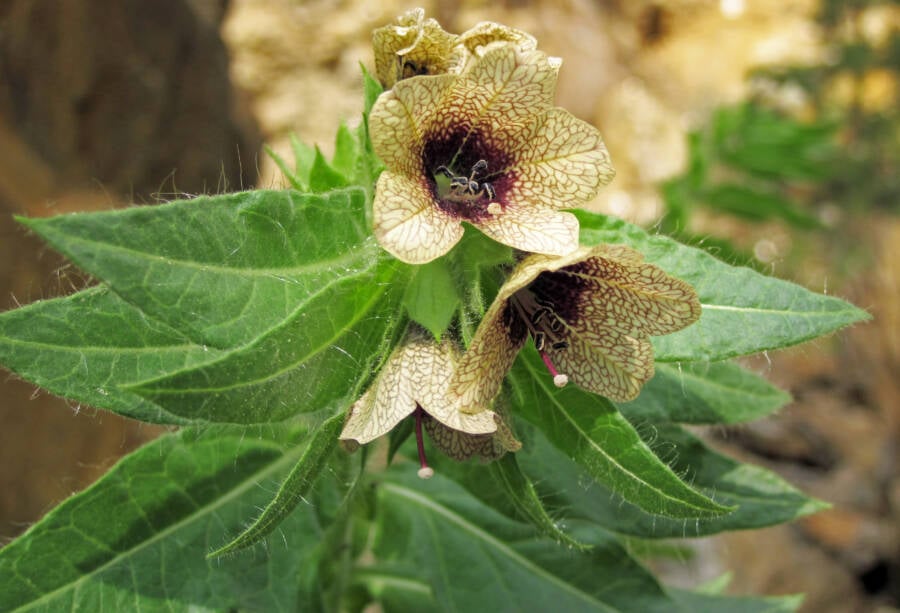 James St. John/FlickrHyoscyamus niger, known as henbane, is a known hallucinogen and may have been eaten or brewed into a tea and drank by berserkers to induce a trance-like rage before battle.

Berserkers first started their transformation into their wild trance by shivering, getting the chills, and chattering their teeth.

Next, their faces became red and swollen. The rage set in soon after that. It wasn’t until after their trance ended that the berserkers became physically and emotionally exhausted for days.

Each Viking berserker likely did this with a substance that is believed to be Hyoscyamus niger to induce an extreme rage-filled state for battle, according to research by Karsten Fatur, an ethnobotanist at the University of Ljubljana in Slovenia.

Known colloquially as henbane, the plant was used in potions to create psychoactive potions that would purposefully cause sensations of flight and wild hallucinations. 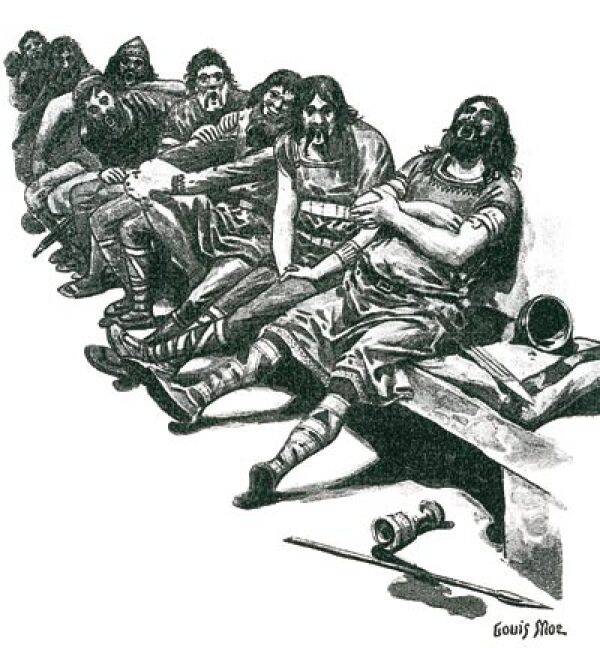 Wikimedia Commons“Berserkers in the King’s Hall” by Louis Moe. According to historical sources, berserkers would spend days recovering from their battles, likely from a hallucinogenic come-down.

“This state has been variously claimed to involve anger, increased strength, a dulled sense of pain, decreases in their levels of humanity and reason,” Fatur explains.

It is “behavior akin to that of wild animals (including howling and biting on their shields), shivering, chattering of their teeth, chill in the body, and invulnerability to iron (swords) as well as fire.”

After taking these drugs, we can theorize that Viking berserkers would howl like the wild animals whose skins they wore, then they would go fearlessly into the battle and kill their enemy with abandon.

Although Fatur’s research points to stinking nightshade as berserkers’ drug of choice for many good reasons, others have previously theorized that they used the hallucinogenic mushroom Amanita muscaria to get them into that raging altered state.

What Happened To The Berserkers? 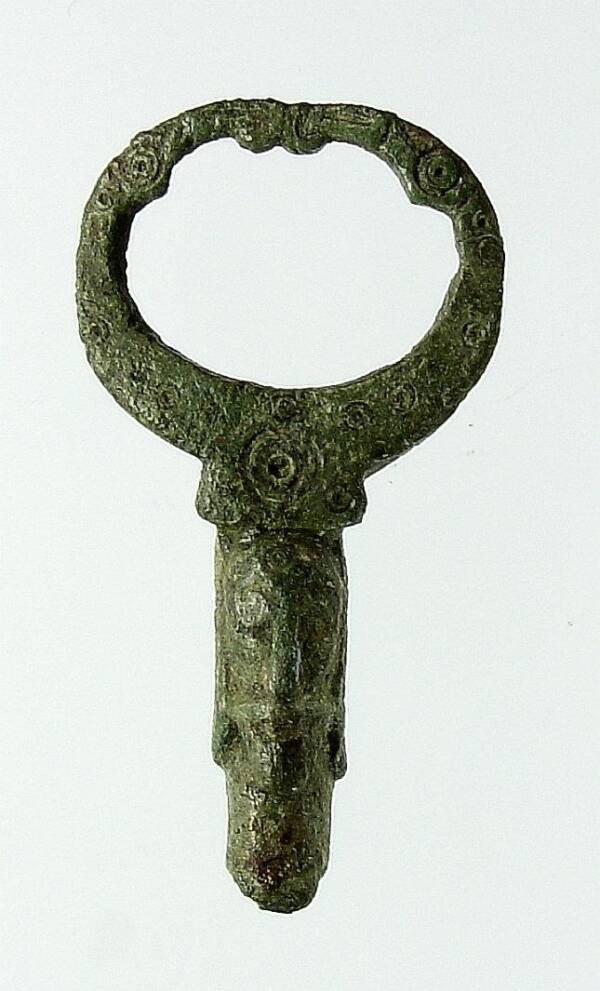 National Museum of DenmarkA depiction of berserker wearing a horned helmet found in Denmark dating to around the 10th century.

The Viking berserkers may have been willing to wildly race into battle and face impending death because they believed something wonderful was waiting on the other side. According to Viking mythology, soldiers that died in battle would be greeted in the afterlife by beautiful supernatural women.

Legends told that these female figures, who were known as Valkyries, would comfort the soldiers and lead them to Valhalla, the luxurious hall of the war-god Odin. This wasn’t a place for retirement and relaxation, though. Made of elaborate armor and weaponry, Valhalla was a place where warriors prepared to fight alongside Odin even after their death.

Beyond the immortal legends, the berserkers’ glory days were short-lived. Jarl Eiríkr Hákonarson of Norway outlawed berserkers in the 11th century. By the 12th century, these Norse warriors and their drug-induced fighting practices had disappeared completely, never to be seen again.

After reading about the terrifying Viking berserkers, learn about 8 Norse Gods With Stories You’ll Never Learn In School. Then, discover the 32 most surprising facts about who the Vikings really were.