How Bikini Atoll Was Ruined By Castle Bravo And Operation Crossroads

During the Cold War, the U.S. conducted the Castle Bravo and Operation Crossroads nuclear tests on Bikini Atoll — displacing natives and poisoning the area to this day. 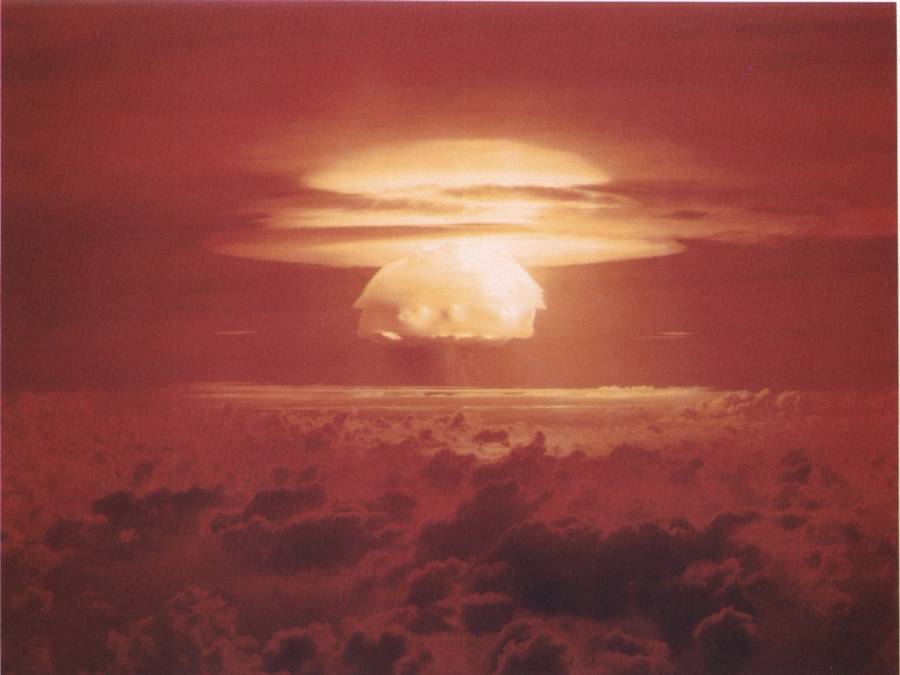 Wikimedia CommonsThe mushroom cloud from the Castle Bravo nuclear test blast at Bikini Atoll, which was 1,000 times more powerful than the bomb dropped over Hiroshima. March 1, 1954.

Bikini Atoll’s isolation had proved a blessing early in its history. The small population of the Pacific island chain — about 1,800 miles from Papua New Guinea, the nearest land mass of note — was free from the conflict of the outside world until the 20th century, when it served as a Japanese outpost during World War II. After the war, the United States took over administration of the atoll, at which point its isolation became a curse.

The U.S. realized that Bikini Atoll’s isolation made it the ideal area for nuclear testing. One Sunday in February 1946, the island’s U.S. military governor asked the locals if they would be willing to temporarily relocate for “the good of mankind and to end all world wars.”

The islanders agreed under the impression they would be able to return to their homes after only a brief period. No one involved thought that, thanks to the nuclear testing, Bikini Atoll would remain uninhabited for more than 70 years. 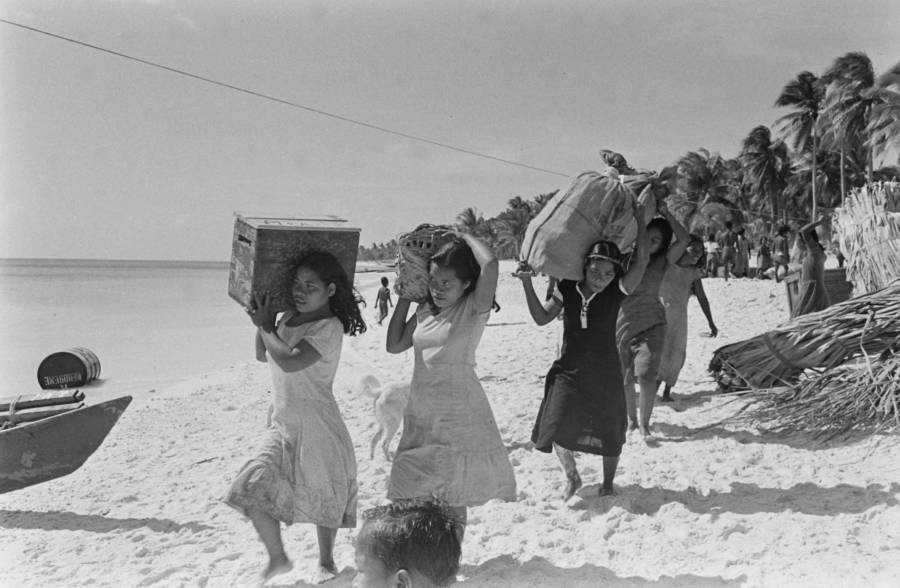 Nuclear testing began that very year with a devastating nuclear test known as Operation Crossroads, but testing was soon terminated due to safety concerns after one of the detonations resulted in a 94-foot tsunami that coated everything in its path with radioactive water.

The entire test fleet, which consisted of old American ships and captured Axis vessels from the war, was sent to the bottom of the atoll’s lagoon, including Japanese Admiral Yamamoto’s flagship, Nagato, where he had received confirmation that the Pearl Harbor attacks were underway. 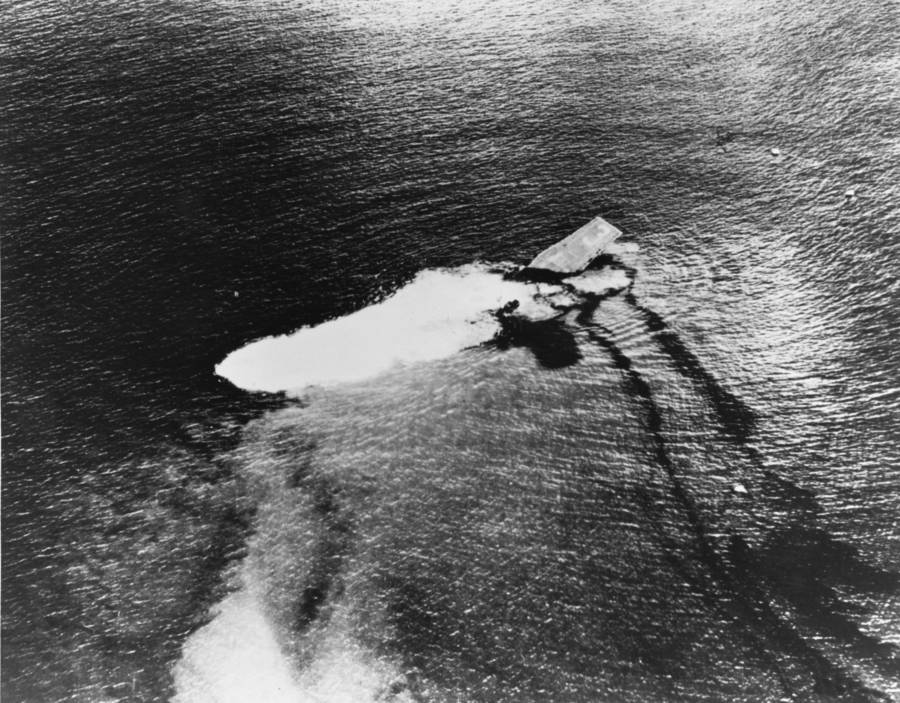 The next series of tests that began in 1954, had devastating if unintended consequences for Bikini Atoll that are still wreaking havoc to this day.

Codenamed Operation Castle, these detonations were meant to test the efficiency of a deliverable hydrogen bomb: one that was small enough to be transported by plane, but had the capability to level an entire city. The result was the Castle Bravo test, which used a bomb 1,000 times more powerful than the one that annihilated Hiroshima. This bomb was the largest U.S. nuclear device ever detonated.

However, two things went horribly wrong with Castle Bravo: the scientists had severely underestimated the yield of the bomb (it would be more than double what they had predicted) and the winds changed during the detonation. Instead of being carried over the open ocean, the radioactive fallout fell over populated areas.

Children on the atolls within range thought that the powdery substance falling from the skies was snow and began to eat it. The islanders were literally covered with the fallout until they were evacuated two days later. The unsuspecting crew of a Japanese fishing vessel 80 miles east of the Castle Bravo test site was also exposed to the fallout. Traces of radioactivity from the blast were later found as far away as Europe. 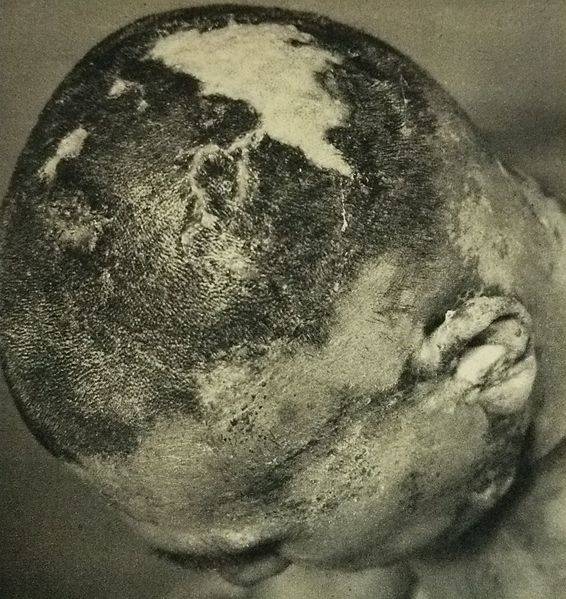 Wikimedia CommonsThe crew of a Japanese fishing vessel was unintentionally exposed to nuclear fallout from the Castle Bravo test at Bikini Atoll.

Although nuclear testing in Bikini Atoll officially ended in 1958, the high levels of radiation prevented the inhabitants from returning until more than a decade later, when President Johnson promised that the U.S. would work to ensure they could go back to their homeland. An eight-year plan was prepared that included the replanting of crops and clearing of radioactive debris.

The islanders finally began to return home in the early 1970s, nearly 30 years after the testing had begun. However, during routine surveillance in 1978, the U.S. found that the inhabitants of Bikini Atoll were exhibiting dangerously high levels of radioactivity and the entire population once again had to be evacuated. They would not return.

Today, the danger of living on Bikini Atoll comes from consuming contaminated food or water; there is no real risk in simply walking around the islands, although the crater from the blast is still visible from the air.

In an attempt to make amends for Castle Bravo, Operation Crossroads, and all of the nuclear testing at Bikini Atoll, the U.S. set up a series of trust funds amounting to millions of dollars to provide for the islanders whose homes had been destroyed.

And the testing has also given the islanders a new source of income, albeit one that comes nowhere close to making up for the damage done: Some locals now run diving tours through a graveyard of World War II battleships left on the ocean floor thanks to Operation Crossroads some 70 years before.

After this look at Bikini Atoll, Operation Crossroads, and Castle Bravo, read up on the Halifax Explosion, history’s largest blast before nuclear weapons. Then, see some astounding photos that document the United States’ reckless history of nuclear testing.