Over 70 years after this brutal murder, the Black Dahlia case remains open. 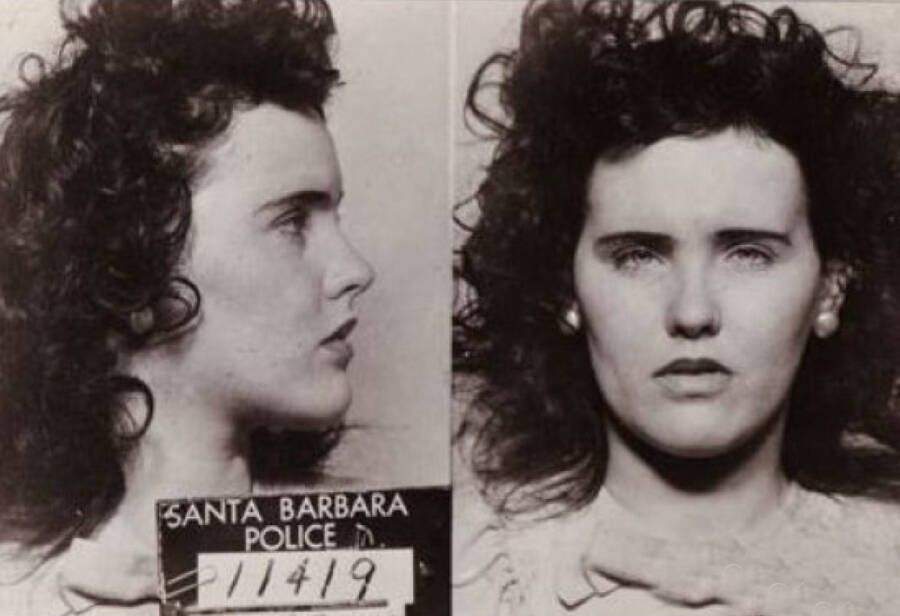 Wikipedia CommonsMugshot of Elizabeth Short, aka the Black Dahlia.

The 1947 murder of Elizabeth Short, also known as the “Black Dahlia,” is one of the oldest cold cases in Los Angeles to date. Not only was it a horrific crime, it was also notoriously difficult to solve.

In the decades since the Black Dahlia murder, police, the press, and amateur sleuths alike have delved deep into this unsolved crime and developed several convincing theories. Though we may never know who killed the Black Dahlia, poring over the evidence in this case is just as darkly fascinating now as it was in 1947.

The Murder Of Elizabeth Short

On January 15, 1947, Elizabeth Short’s dead body was found in a Los Angeles neighborhood by a mother out for a walk with her child.

According to the woman, the way Short’s body had been posed made her think that the corpse was a mannequin at first. But a closer look revealed the true horror.

The 22-year-old Short had been sliced in two at the waist and completely drained of blood. Some of her organs — such as her intestines and uterus — had been removed and neatly placed underneath her body. And her stomach was full of feces, leading some to believe that she’d been forced to eat them before she was killed.

The most chilling mutilations, however, were the lacerations on her face. The killer had sliced each side of her face, from the corners of her mouth to her ears, creating what’s known as a “Glasgow smile.” 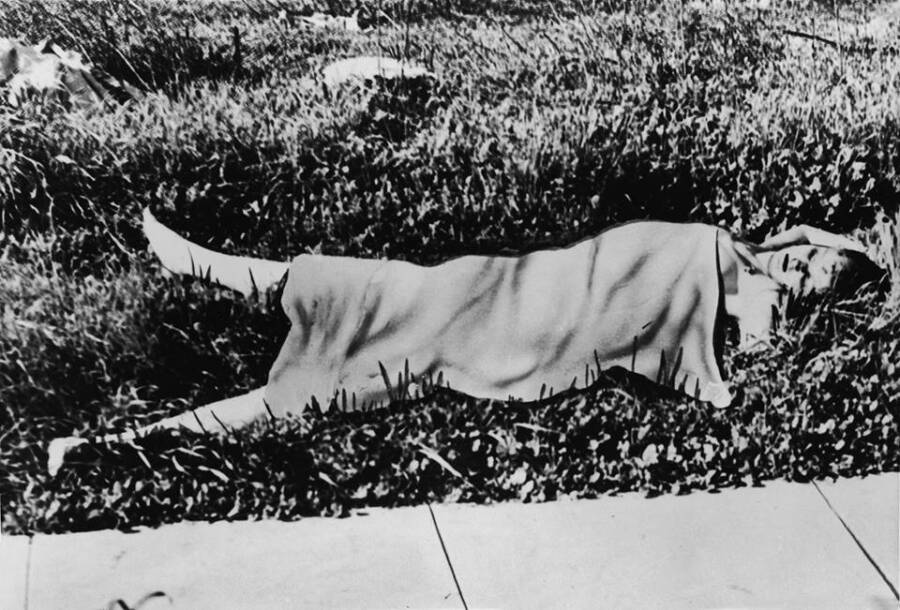 Since there was no blood found at the scene and the body had been washed clean, Los Angeles Police Department detectives concluded that she must have been killed elsewhere.

The LAPD reached out to the FBI to help identify the body by searching their fingerprint database. Short’s fingerprints turned up because she had applied for a job as a clerk at the commissary of the U.S. Army’s Camp Cooke in California back in 1943.

And then her prints turned up a second time since she had been arrested by the Santa Barbara Police Department for underage drinking — just seven months after she’d applied to the job.

The FBI also had her mug shot from her arrest, which they provided to the press. And it didn’t take long for the media to start reporting every salacious detail.

The Press Gets Involved In The Investigation 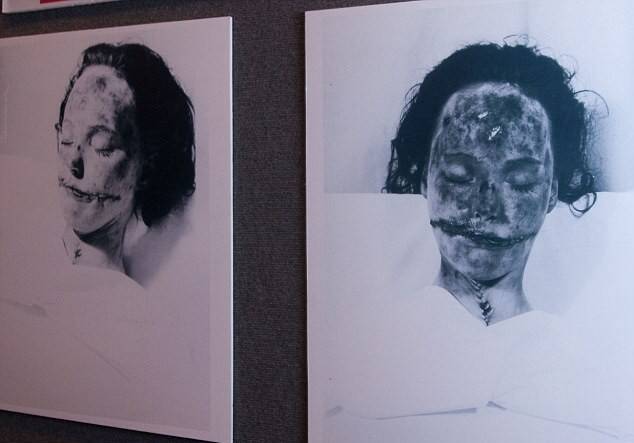 Matt Terhune/Splash NewsAutopsy photos of Elizabeth Short show the terrifying smile that was carved into her face.

As the media learned more about Elizabeth Short’s history, they began to brand her as a sexual deviant. One police report read, “This victim knew at least fifty men at the time of her death and at least twenty-five men had been seen with her in the sixty days preceding her death… She was known as a teaser of men.”

They gave Short the nickname, “The Black Dahlia,” due to her reported preference for wearing a lot of sheer black clothing, after the movie The Blue Dahlia that was out at the time. Some people even spread the false rumor that Short was a prostitute.

But as widely publicized as the case was, authorities had tremendous difficulty figuring out who was behind it. However, members of the media received a few clues.

About a week after her body was found, the Los Angeles Herald Examiner received a call from a person claiming to be the murderer, who said he would be sending Short’s belongings in the mail as proof of his claim.

Shortly thereafter, the Examiner received a package with Short’s birth certificate, photos, business cards, and an address book. Also included was a letter pasted together from newspaper and magazine letter clippings that read, “Los Angeles Examiner and other Los Angeles papers here is Dahlia’s belongings letter to follow.”

The Examiner indeed received more letters, also pasted together from clippings. They claimed the murder was “justified” and warned the media not to try to find them. Everything sent by the alleged killer had been wiped clean with gasoline, so investigators couldn’t lift any fingerprints from the evidence.

Police searched countless locations throughout Los Angeles for clues and heard over 60 confessions for the murder during the initial investigation, but ultimately never solved the crime.

As time went on and the case went cold, many people assumed that the Black Dahlia murder was a date gone wrong, or that Short had run into a sinister stranger late at night while walking alone.

After over 70 years, the Black Dahlia murder case remains open. But in recent years, a couple of intriguing — and chilling — theories have emerged.

The Man Who Thinks His Father Killed Elizabeth Short 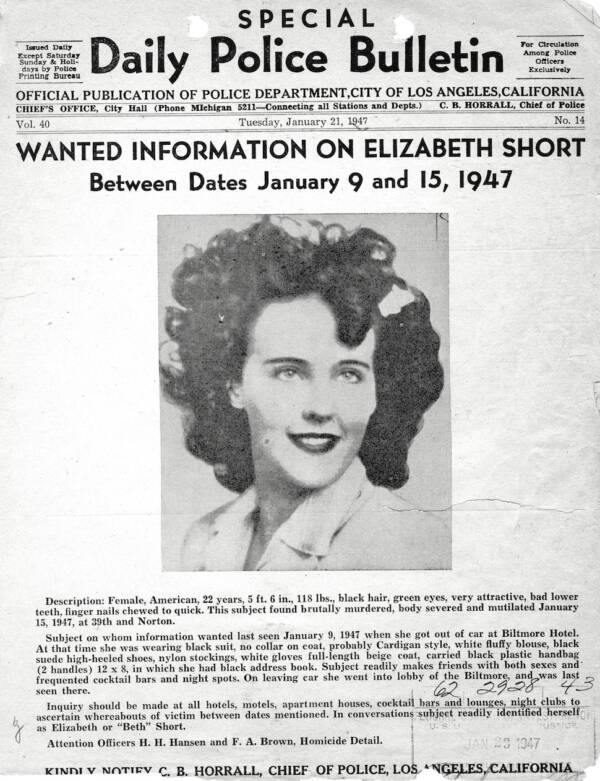 Wikimedia CommonsA police bulletin seeking information on Elizabeth Short’s activities prior to the murder describes her as “very attractive” with “bad lower teeth” and “fingernails chewed to quick.”

Shortly after his father’s death in 1999, now-retired LAPD detective Steve Hodel was going through his father’s belongings when he noticed two photographs of a woman that bore a striking resemblance to Elizabeth Short.

After discovering these haunting images, Hodel began using the skills he had gained as a policeman to investigate his own deceased father.

Hodel went through newspaper archives and witness interviews from the case, and even filed a Freedom of Information Act to obtain FBI files on the Black Dahlia murder.

He also had a handwriting expert compare samples of his father’s writing to the writing on some of the notes sent to the press from the alleged killer. The analysis found a strong possibility that his father’s handwriting matched, but the results were not conclusive.

On the grislier side, crime scene photos showed that Short’s body had been dismembered in a manner consistent with a hemicorporectomy, a medical procedure that slices the body beneath the lumbar spine. And Hodel’s father was a doctor — who attended medical school when this procedure was being taught in the 1930s.

Additionally, Hodel searched his father George Hodel’s archives at UCLA, finding a folder full of receipts for contracting work on his childhood home. In that folder, there was a receipt dated a few days before the murder for a large bag of concrete, the same size and brand as a concrete bag found near Short’s body. Investigators believe the murderer used the bag to transport the corpse.

By the time Hodel began his investigation, many of the police officers who originally worked on the case were already dead. However, he carefully reconstructed conversations these officers had with acquaintances about the case.

Eventually, Hodel compiled all of his evidence into a 2003 bestseller called Black Dahlia Avenger: The True Story. 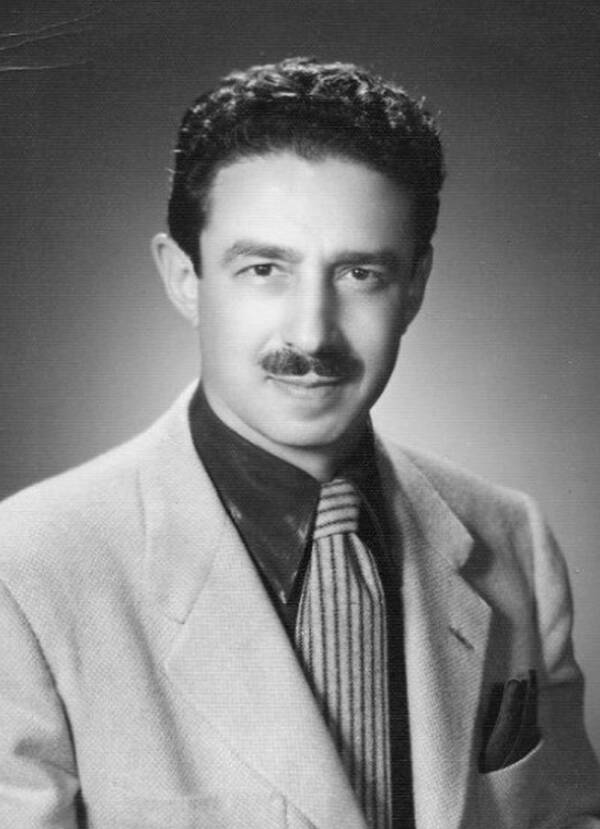 While fact-checking the book, Los Angeles Times columnist Steve Lopez requested official police files from the case and made an important discovery. Shortly after the murder, the LAPD had six main suspects, and George Hodel was on their list.

In fact, he was such a serious suspect that his home was bugged in 1950 so the police could monitor his activities. Much of the audio was innocuous, but one chilling exchange stuck out:

“8:25pm. ‘Woman screamed. Woman screamed again. (It should be noted, the woman not heard before the scream.)'”

Later that day George Hodel was overheard telling someone, “Realize there was nothing I could do, put a pillow over her head and cover her with a blanket. Get a taxi. Expired 12:59. They thought there was something fishy. Anyway, now they may have figured it out. Killed her.”

He continued, “Supposin’ I did kill the Black Dahlia. They couldn’t prove it now. They can’t talk to my secretary anymore because she’s dead.”

Even after this shocking revelation, which seems to support that George killed Short — and possibly also his own secretary — the Black Dahlia case still hasn’t been officially closed. However, this hasn’t stopped Steve Hodel from investigating his father.

He says he has found details from dozens other murders that could possibly be connected to his father, implicating him as not only the Black Dahlia murderer but also as a deranged serial killer. 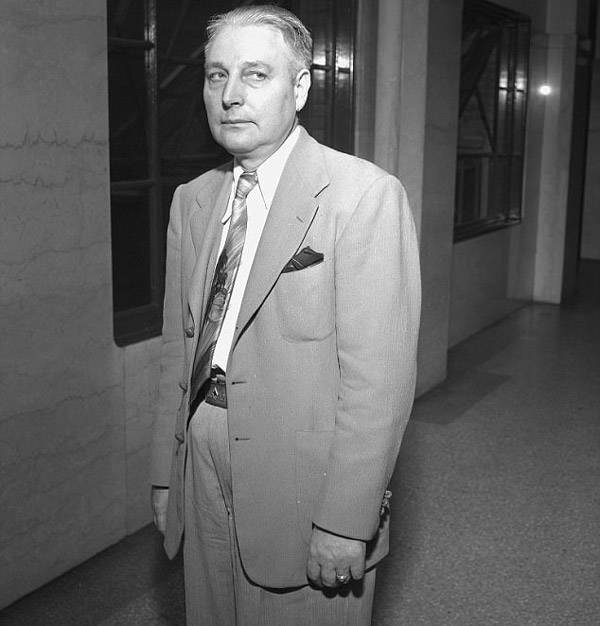 In 2017, British author Piu Eatwell announced that she had finally solved the decades-old case, and published her findings in a book called Black Dahlia, Red Rose: The Crime, Corruption, and Cover-Up of America’s Greatest Unsolved Murder.

The real culprit, she claimed, was Leslie Dillon, a man who police briefly considered the primary suspect but ultimately let go. However, she also claimed there was much more to the case besides the killer himself.

According to Eatwell, Dillon, who worked as a bellhop, murdered Hurst at the behest of Mark Hansen, a local nightclub and movie theater owner who worked with Dillon.

Short had reportedly stayed with Hansen a few nights, and he was one of the last people reported to have spoken with her before her death. Eatwell alleges that Hansen was infatuated with Short and came onto her, though she rebuffed his advances.

Then, he called on Leslie Dillon, an acquaintance, to “take care of her.” Hansen, it seemed, knew Dillon was capable of murder but didn’t realize just how deranged he really was.

Previously, Leslie Dillon had worked as a mortician’s assistant, where he could have potentially learned how to bleed a body dry. 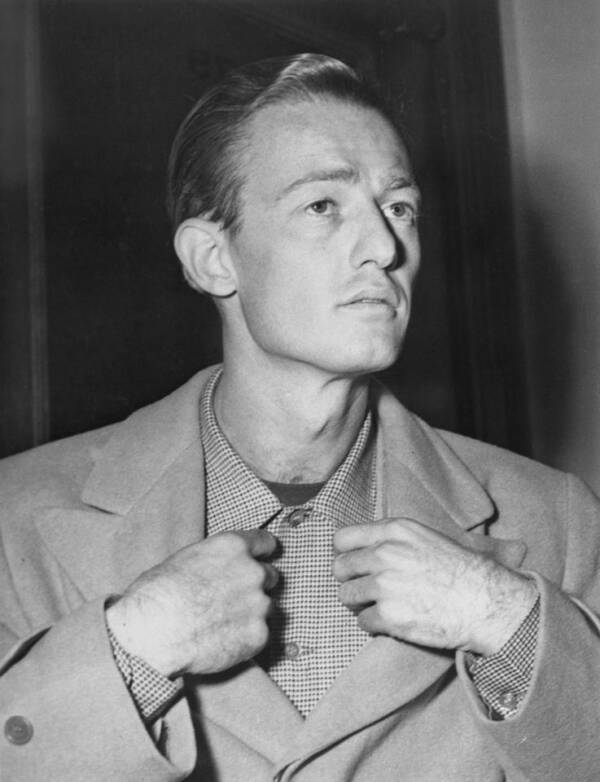 Eatwell also discovered, from police records, that Dillon knew details of the crime that had not been released to the public, such as that Short had a tattoo of a rose on her upper leg, which had been cut out and shoved inside her vagina.

Despite all the evidence pointing to him, Dillon was never charged with the crime. Eatwell claims he was released due to Mark Hansen’s ties to some of the cops at the LAPD.

While Eatwell believes the department was corrupt to begin with, she also thinks that Hansen contributed largely to its corruption by exploiting his ties to certain officers.

Another discovery that lent itself to Eatwell’s theory was a crime scene found at a local motel. During her research, Eatwell came across a report by Aster Motel owner Henry Hoffman.

On the morning of January 15, 1947, he opened the door to one of his cabins and found the room “covered in blood and fecal matter.” In another cabin, he discovered that someone had left a bundle of women’s clothes wrapped up in brown paper, which was also stained with blood.

Instead of reporting the crime, Hoffman simply cleaned it up. He had been arrested four days earlier for beating his wife and didn’t want to risk another run-in with police.

Eatwell believes that the motel is where Short was murdered. Eyewitness reports, though uncorroborated, claim that a woman who resembled Short was seen at the motel shortly before the murder.

Eatwell’s theories have not been proven, as everyone involved with the original Black Dahlia murder case is most likely dead by now, and many official LAPD documents remain locked away in vaults, not for public viewing.

However, Eatwell remains confident in her findings, and truly believes that she’s solved the mysterious and gruesome case of the Black Dahlia murder.

Though we still don’t know for certain who killed the Black Dahlia and why, these recent theories present compelling cases. And it’s possible that the truth is still out there, just waiting for the right investigation to finally bring it to light.

Enjoy this article on the Black Dahlia murder? Next, read about the Cleveland Torso Murders, a series of killings strikingly similar to the Black Dahlia’s. Then, read bout other creepy still-unsolved crimes.