Inside The Black Pete Tradition Of Christmas Blackface In The Netherlands

Dutch Christmas traditions have long included a blackface servant known as Zwarte Piet, but anti-racism activists are now calling for this to end.

Every year, thousands of people line the streets across the Netherlands to celebrate the festival of Saint Nicholas, or, as he is better known, Sinterklaas.

The story of Sinterklaas has been celebrated throughout Europe since the Middle Ages. He is a robed, white-bearded man who visits good children on December 5 to lavish them with gifts. 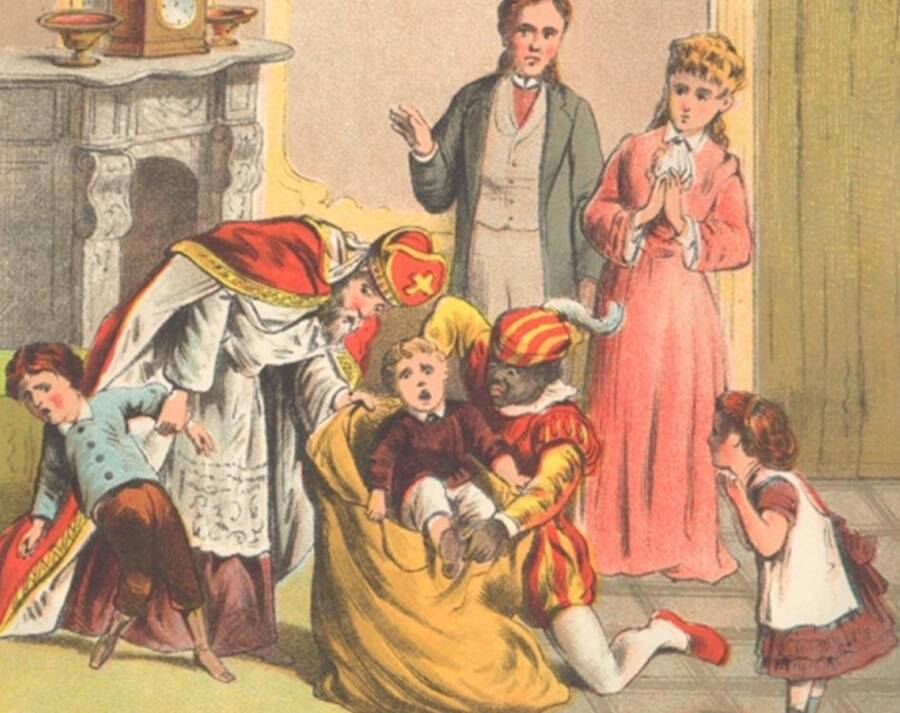 Many Dutch people dress up as Zwarte Piet — which literally translates to “Black Pete” — to celebrate the holiday by donning a curly wig, big gold earrings, red lips, and blackface.

However, the practice has drawn increasing criticism for its racist depiction of Black people — especially as the Netherlands grapples with its history of colonialism and slavery.

Who Is Black Pete? 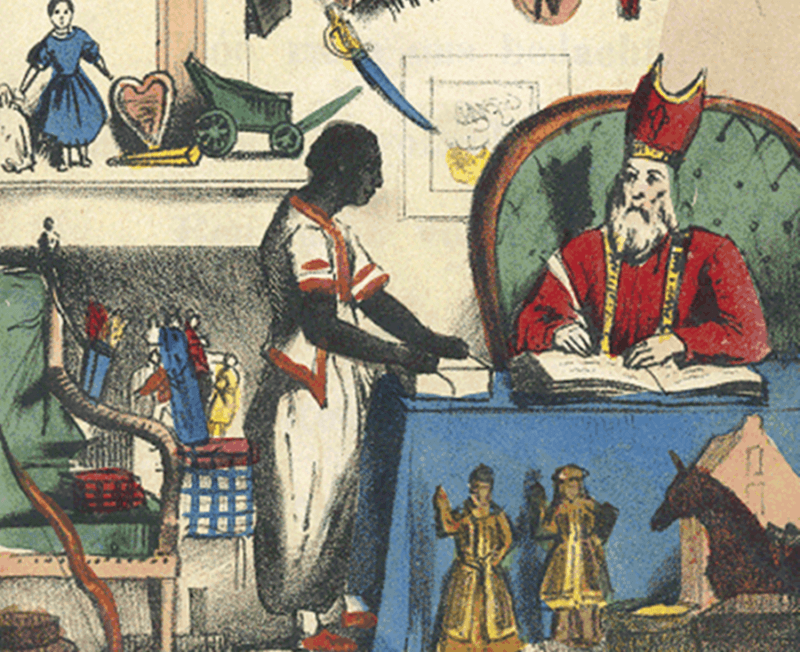 Wikimedia CommonsWhile Saint Nicholas has been celebrated in Europe since the Middle Ages, his Black helper Zwarte Piet didn’t come along until the beginning of the mid-19th century.

In northern Europe, Saint Nicholas is known as Sinterklaas, a man who rides a gray horse called Amerigo and hands out presents on his birthday, Dec. 5th. But Sinterklaas only gives presents to nice children. The naughty kids get a visit from Krampus or Belsnickle, evil demons who punish all bad children.

Listen above to the History Uncovered podcast, episode 54: Krampus, also available on Apple and Spotify.

These demons beat misbehaving children with sticks, eat them, or kidnap them and send them off to hell. Legends of these terrifying ghouls make up a significant part of winter traditions in European countries like Bavaria, Austria, and the Czech Republic.

The Netherlands has a slightly different Sinterklaas tale. According to Dutch tradition, Sinterklaas makes his rounds of giveaways accompanied by a helper named Zwarte Piet, or Black Pete.

Although he is not depicted as terrifying or otherworldly like Krampus or Belsnickle, Black Pete has a similarly frightful reputation among Dutch children. When he encounters naughty children, Zwarte Piet is said to put them in his empty bag of toys and kidnap them.

The Origins Of The Controversial Zwarte Piet Tradition 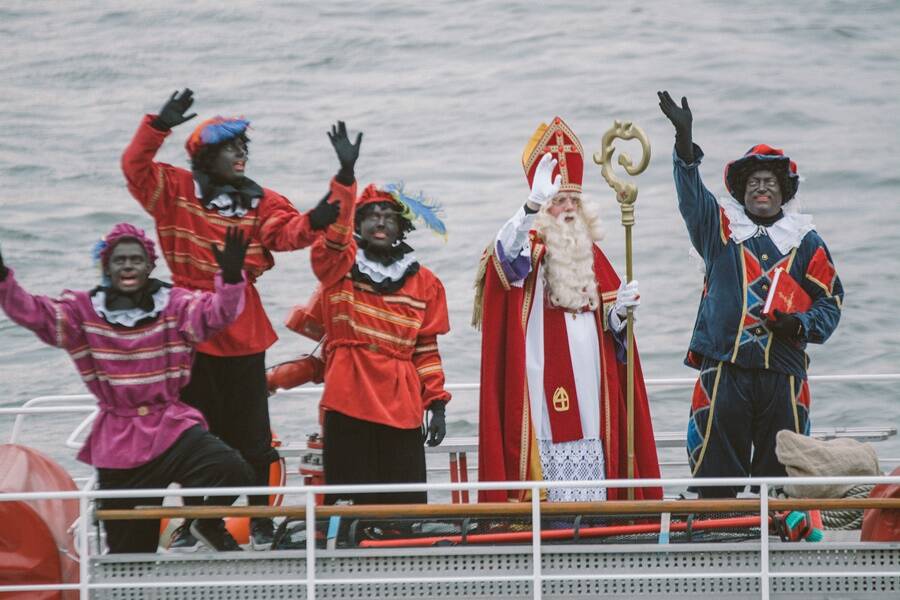 Ying Tang/NurPhoto via Getty ImagesA 2015 U.N. committee urged the Netherlands to drop the Black Pete character from its Sinterklaas celebrations due to its racist sterotyping of Black people.

The exact origins of Black Pete are hazy, but he is largely believed to have come from a children’s book in the early 19th century.

A Sinterklaas helper was first mentioned in 1800, though there was no description of his physical appearance. By the 1820s, the new character was described as a “curly-haired negro” — and he became known as Zwarte Piet.

The first illustration of this dark-skinned helper appeared in a children’s book about Sinterklaas in 1850 written by Jan Schenkman. Zwarte Piet is described as a bumbling Moor from Spain who carries Sinterklaas’ heavy load of presents, wraps gifts, and kidnaps naughty children to punish them. 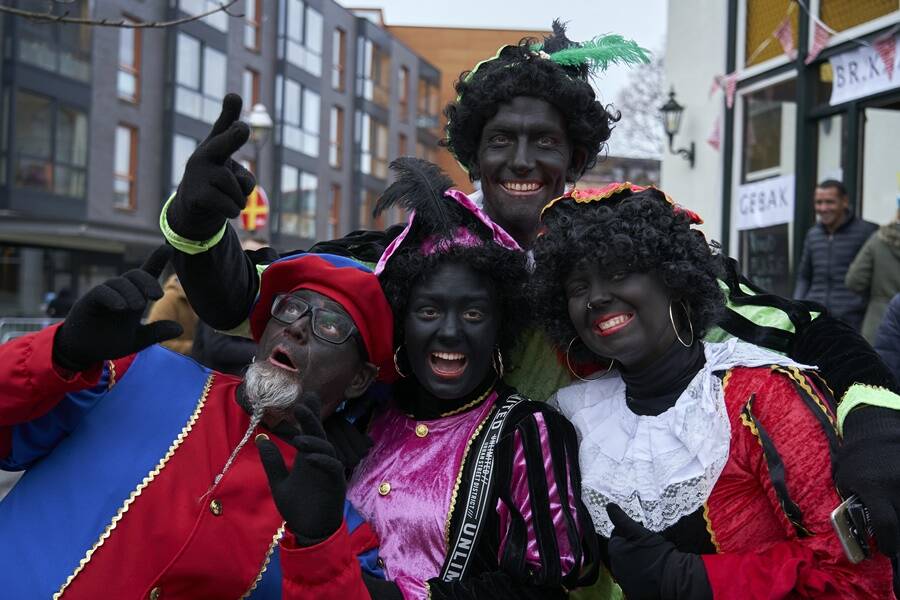 Nacho Calonge/Getty ImagesThousands of white Dutch people don blackface and dress up as Zwarte Piet during the Sinterklaas parades in the Netherlands.

According to political scientist Joke Hermes, Schenkman’s idea of a dark-skinned curly-haired Sinterklaas helper may have been inspired by his encounter with the royal family’s Black slave.

In any case, the image of Black Pete became synonymous with the Sinterklaas celebrations in the Netherlands. Thousands of white Dutch people paint their faces black to dress up as the character every year.

How Black Pete Is Celebrated In Dutch Culture 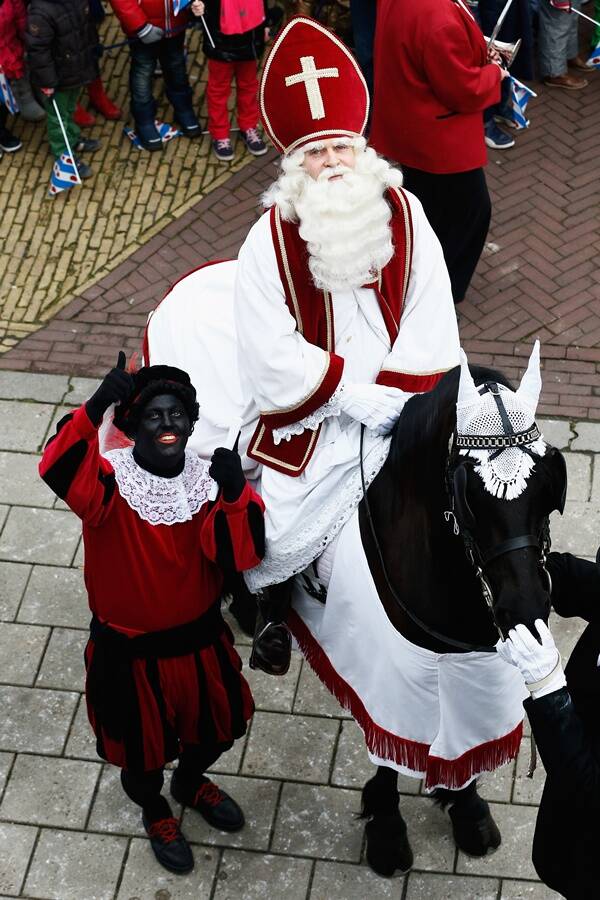 Dean Mouhtaropoulos/Getty ImagesSupporters argue Zwarte Piet’s black skin is merely soot from the chimney, but the character’s racialized features suggest it is indeed a caricature of Black people.

In November, parades are held across the Netherlands to celebrate Sinterklaas. Those cosplaying as Zwarte Piet are usually white people dressed in outlandish costumes, afro wigs, and red lipstick.

They paint their faces black to match the character. Zwarte Piet impersonators also speak in Afro-Caribbean accents, further emphasizing the racialization of the character.

The tradition has come under fire in recent years. More and more people have called out the Zwarte Piet costumes as “blackface,” a racist caricature portrayal of Black people performed by non-Black people.

This reckoning has gained steamed as the Netherlands, which has a long history of colonialism and involvement in the transatlantic slave trade, has become home to a more diverse population.

The history of blackface itself can be traced back to the minstrel performances that began in the 1830s. Blackface minstrel groups showcased white actors who colored their skin with greasepaint to create racialized, mocking portrayals of Black people for the benefit of a white audience.

The practice was adopted by European performers and continued into the 1970s. For instance, the The Black and White Minstrel Show ran from 1958 until 1978 on BBC.

The Impact Of Zwarte Piet On Racism In The Netherlands 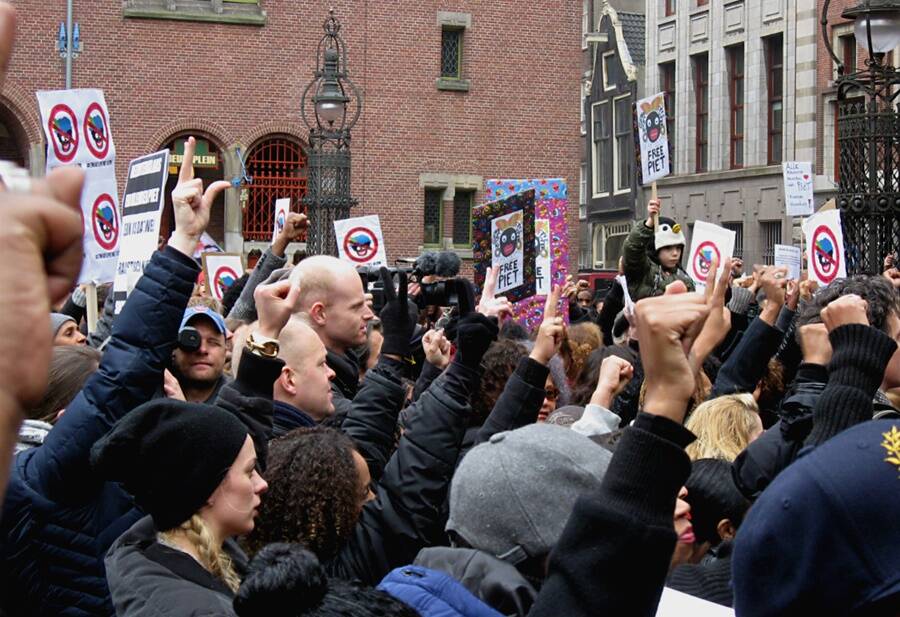 Wikimedia CommonsIn 2019, there were anti-Zwarte Piet protests across 18 cities in the Netherlands.

The movement to get rid of the Zwarte Piet blackface tradition strengthened in 2011. That year, protesters from a national campaign called “Zwarte Piet is Racism” were brutally arrested by police following peaceful protests in a handful of towns.

By 2019, there were anti-Black Pete protests in 18 cities across the Netherlands ahead of the Sinterklaas festivals.

But the tradition of Zwarte Piet is deeply ingrained in Dutch society. Some Dutch people argue that the character should not be discontinued because it is part of a long-held Dutch tradition around Sinterklaas. They see it as a cherished children’s celebration. However, critics of Zwarte Piet fiercely disagree.

“This blackface indoctrination is something that everyone in the Netherlands grew up with,” said Jerry Afriyie, a Black Dutch activist and one of the driving forces behind the campaign against Zwarte Piet blackface.

“So that means the judge, the police, the prime minister, all the people we’re depending on to stop racism, chances are that around this time they are in blackface entertaining their children.” 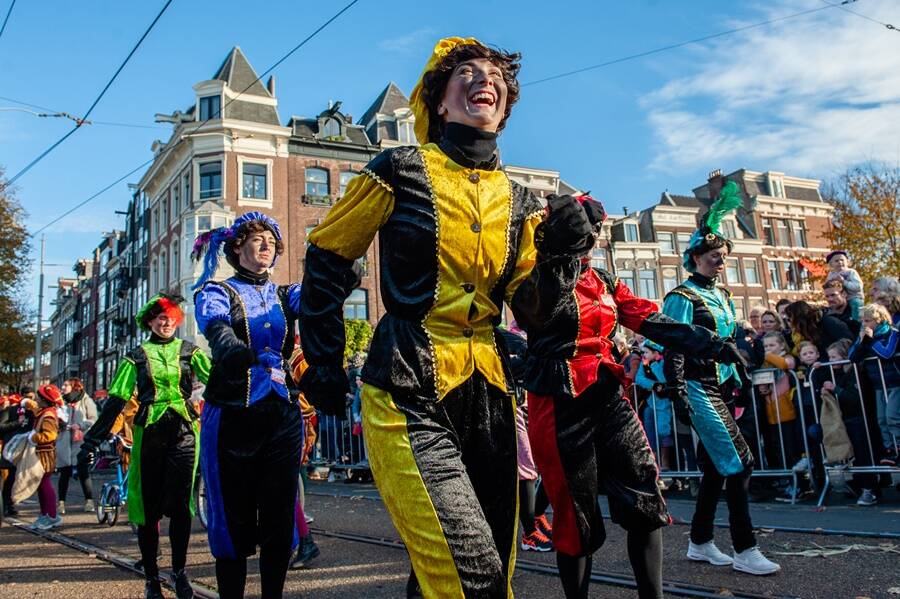 Romy Arroyo Fernandez/NurPhoto via Getty ImagesMany parade organizers have replaced the blackface tradition with performers partially covered in blotches of soot instead.

“If you habituate children to respond to these strange characters with black faces, that’s their model of Black people,” said Mieke Bal, a Dutch cultural theorist at the University of Amsterdam.

The report called on the Dutch government to eliminate the practice as a form of racial stereotyping. 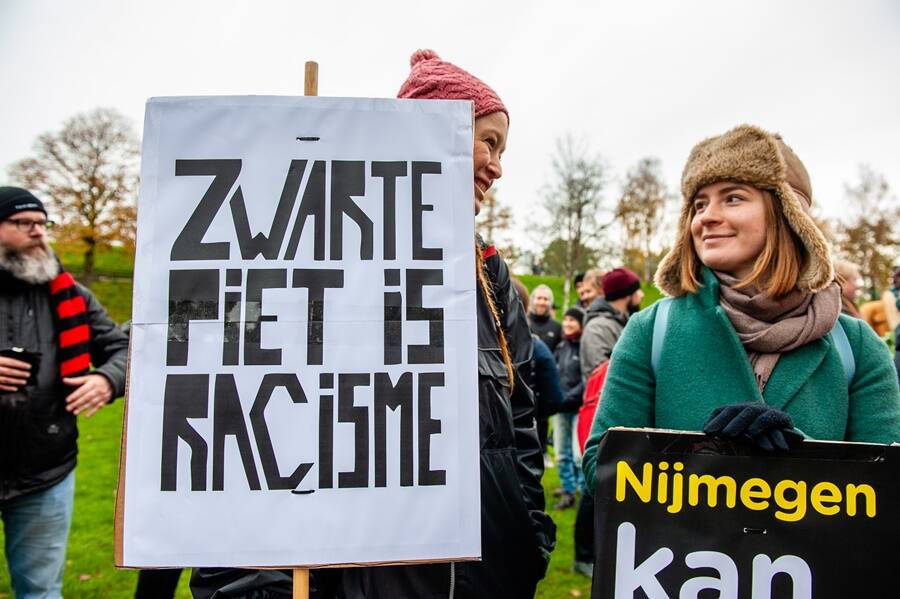 Romy Arroyo Fernandez/NurPhoto via Getty ImagesTwo anti-Black Pete activists holding banners during the arrival of Sinterklaas to the city of Nijmegen in 2019.

Most disturbingly, there have been incidents of white supremacists coopting the pro-Zwarte Piet movement to signal their ethnonationalism. Reports of extremists attacking anti-Zwarte Piet protesters, distributing right-wing party stickers to children, and performing the Nazi salute at rallies have spiked in recent years.

Although the Zwarte Piet tradition hasn’t entirely ended, there have been changes. Some parade organizers have adjusted the character by presenting performers with black blotches on their faces — reflecting the idea that Zwarte Piet’s face is black from chimney soot, not the color of his skin.

Still, such traditions are deeply ingrained in Dutch culture. Like many countries around the world, the Netherlands has a long way to go in reconciling its troubling past with its diverse present.