The Story Of Krampus, The Anti-Santa Who Punishes Naughty Children With Season’s Beatings

A half-goat demon said to be the son of the Norse god of the underworld, Krampus punishes naughty children at Christmastime — and drags some to hell.

They say he comes on the evening of December 5th, a night called “Krampusnacht.” You can usually hear him coming, as the soft steps of his bare human foot alternate with the clip-clop of his cloven hoof.

And when you see him, you’ll instantly notice that he’s armed with birch branches — so he can beat naughty children. His name is Krampus, and he’s the terror of Austria and the Alpine region around Christmastime. 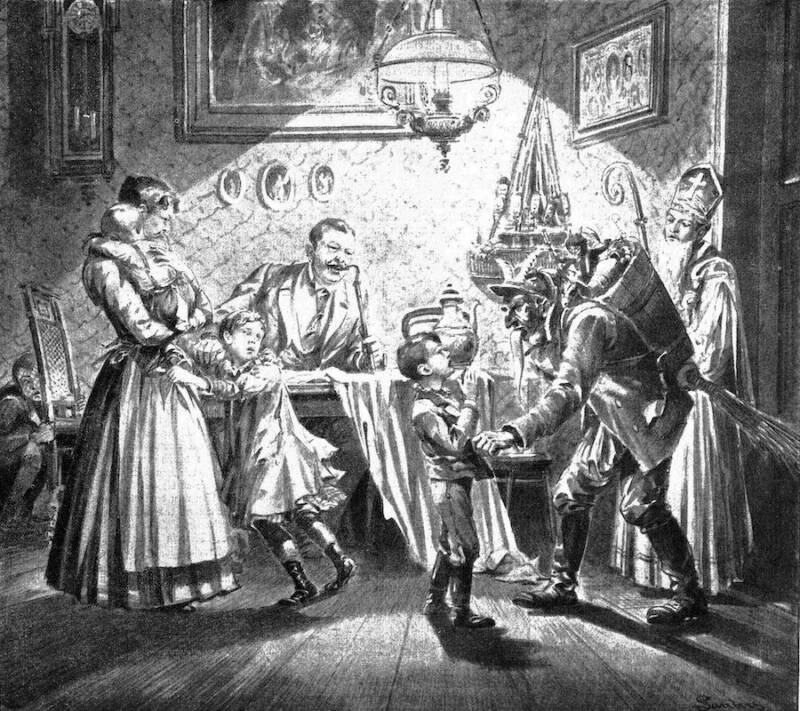 Wikimedia CommonsAn illustration of Krampus and Saint Nicholas visiting a home together. 1896.

But who is Krampus? Why is he known as the anti-Santa? And how did this disturbing legend come about in the first place?

Listen above to the History Uncovered podcast, episode 54: Krampus, also available on Apple and Spotify.

Though descriptions of Krampus’ appearance vary from region to region, some things remain consistent: He is said to have pointed devilish horns and a long snake-like tongue. His body is covered in coarse fur, and he looks like a goat crossed with a demon. 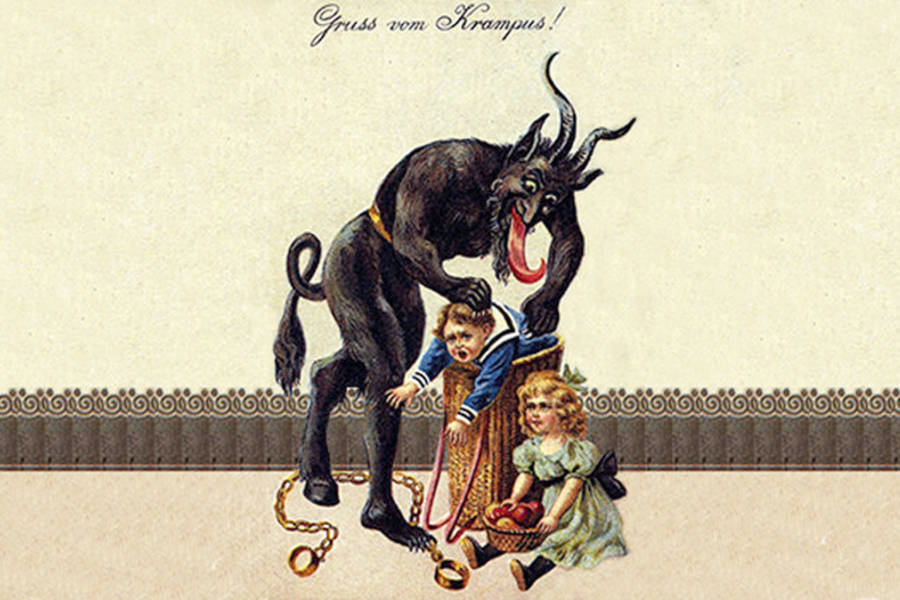 His body and arms are strung with chains and bells, and he carries a large sack or basket on his back to cart off evil children.

Krampus comes to town the night before the Feast of Saint Nicholas and visits all the houses to dish out his punishments.

If you’re lucky, you might just get swatted with a birch branch. If you’re not, you’ll wind up in the sack. After that, your fate is anyone’s guess. The legends suggest you might be eaten as a snack, drowned in a river, or even dropped off in Hell.

Sometimes Krampus is accompanied by Saint Nicholas, who isn’t known to bother himself with naughty children in Central Europe. Instead, he focuses on handing out presents to well-behaved kids and then leaves the rest up to his sinister counterpart. 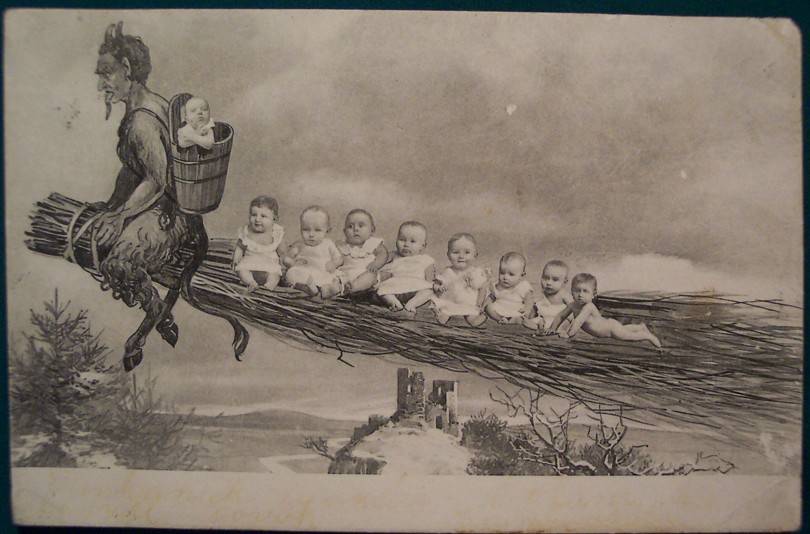 Wikimedia CommonsKrampus carries children off into the night on a bundle of birch branches.

How did Krampus become a regular part of holiday fun in places like Austria, Bavaria, the Czech Republic, and Slovenia? Nobody is entirely certain.

But most people believe that Krampus originally hails from the Alpine region’s pagan past. His name comes from the German word krampen, which means “claw,” and he bears a striking resemblance to the old Norse legends about the son of Hel, the god of the underworld.

It’s a compelling theory, especially since Krampus’ appearance coincides with a number of pagan winter rites, most notably one that sends people parading through the streets to disperse the ghosts of winter. 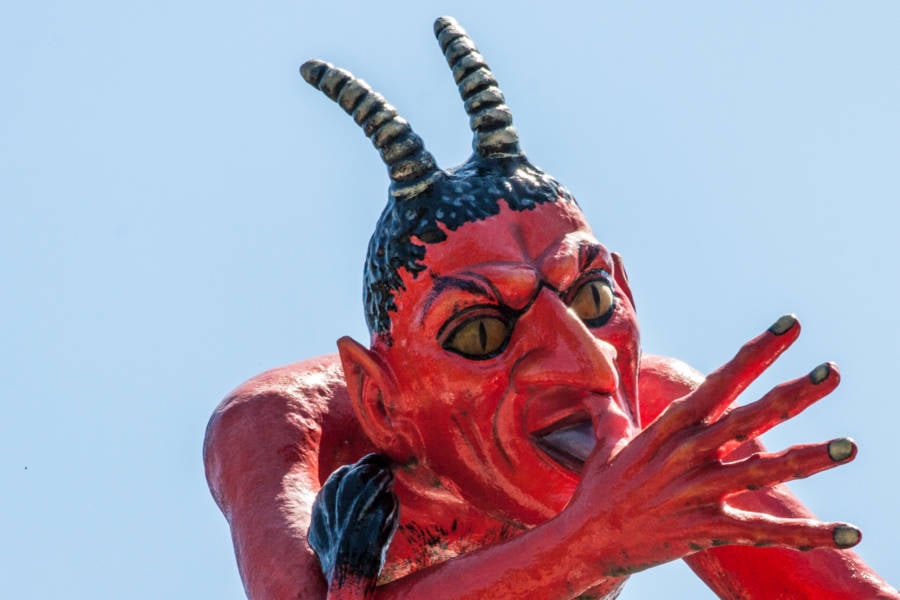 FlickrIn some depictions of Krampus, he resembles the Christian Devil.

Over the years, as Christianity gained popularity in the region, aspects of Krampus’ appearance began to shift to fall in line with Christian beliefs.

The chains, for example, were not originally a feature of Hel’s ghoulish son. It’s believed that Christians added them to evoke the binding of the Devil. And that wasn’t the only change they made. Under Christian hands, Krampus took on a number of more devilish qualities, like the basket that he uses to carry wicked children to Hell.

From there, it isn’t hard to see how Krampus, already associated with the winter festivities, might then have been incorporated into Christian traditions and the legend of Saint Nicholas around Christmastime.

The Modern Krampus And Krampusnacht Celebrations 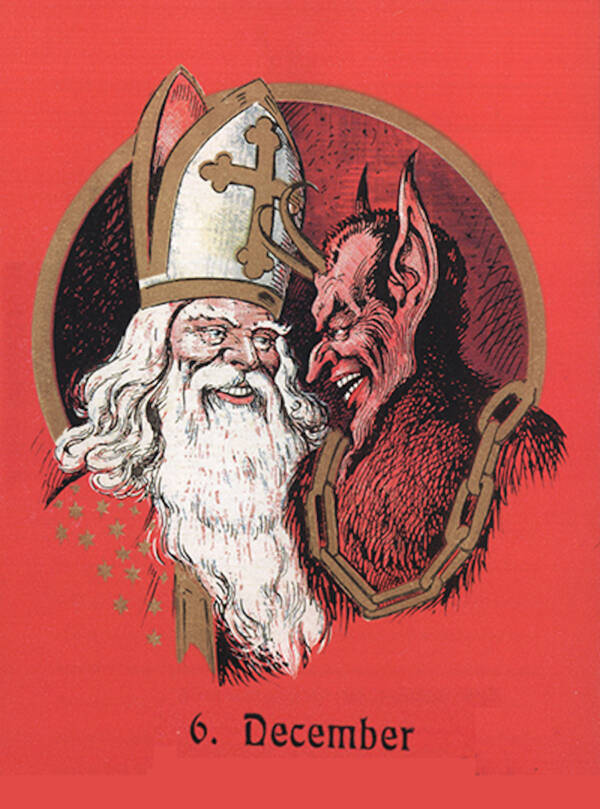 Wikimedia CommonsAn illustration of Krampus and Saint Nicholas from the early 20th century.

Today, Krampus has his own celebration on the day before the Feast of Saint Nicholas in the Alpine region.

Every evening on December 5th, a night called “Krampusnacht,” elegantly dressed Saint Nicks pair up with monstrously outfitted Krampuses and make the rounds to homes and businesses, offering gifts and playful threats. Some people exchange Krampusnacht greeting cards that depict the horned beast alongside festive and funny messages.

Sometimes, large groups of people dress up as Krampus and run amok throughout the streets, chasing friends and passersby with birch sticks. This activity is especially popular among young men. 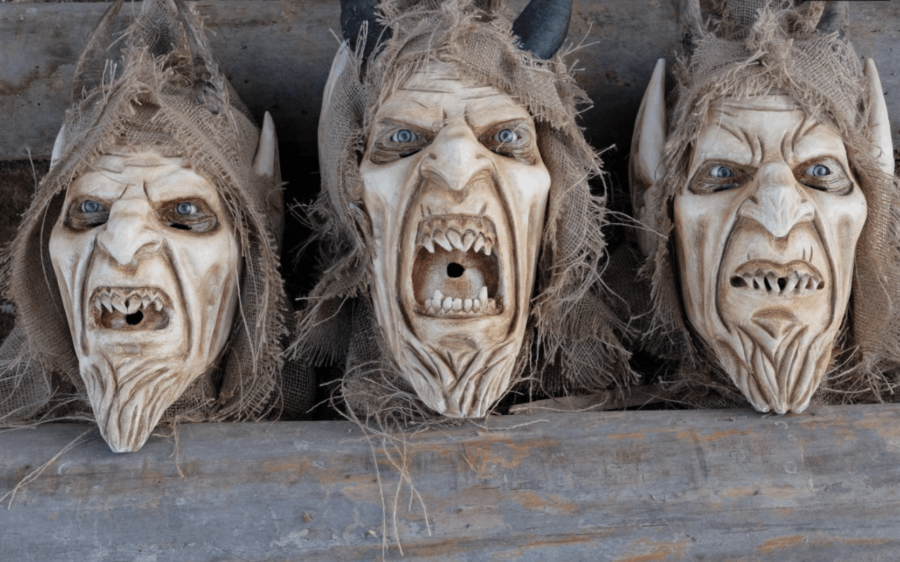 Tourists who’ve witnessed this rowdy celebration say that running into a coffee shop won’t save you from getting swatted. And the swats aren’t exactly gentle. But luckily, they’re usually confined to the legs, and the festive atmosphere often makes up for the occasional welt.

The tradition has become an important one in many countries and has come to include expensive handmade masks, elaborate costumes, and even parades. Though some complain that the celebration is becoming too commercialized, many aspects of the old festival endure.

Krampus masks, for example, are typically carved from wood — and they are the products of significant labor. And artisans often work for months on the costumes, which sometimes end up on display in museums as examples of a living tradition of folk art.

The Perseverance Of A Frightening Christmas Legend 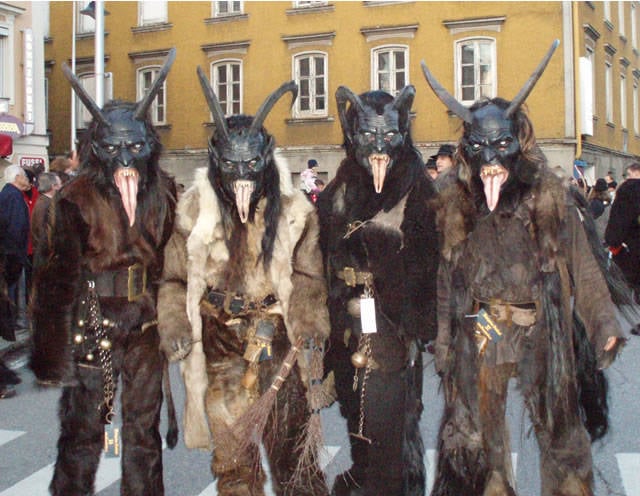 Franz Edelmann/Wikimedia CommonsCostumed Krampuses pose for the camera at a Krampusnacht celebration in 2006.

It’s always remarkable when ancient traditions make it to the present — but Krampus has had an especially rough fight for survival.

In Austria in 1923, Krampus and all Krampusnacht activities were banned by the Fascist Christian Social Party. Their motives were a little murky. Though they agreed that Krampus was a force for evil, there seems to have been some confusion about whether that was because of his clear ties to the Christian Devil or his less-clear ties to the Social Democrats.

Either way, they were sure that Krampus wasn’t good for kids, and they passed out pamphlets titled “Krampus is an Evil Man,” warning parents against influencing young children with threats of a violent holiday intruder.

Though they may have had a point about the traumatic effects of telling misbehaving children that they were going to be eaten by Saint Nick’s evil twin, society wasn’t deeply moved. The ban lasted for only about four years, and vague murmurs of disapproval continued only a little while longer. But in the end, no one could keep Krampus down. 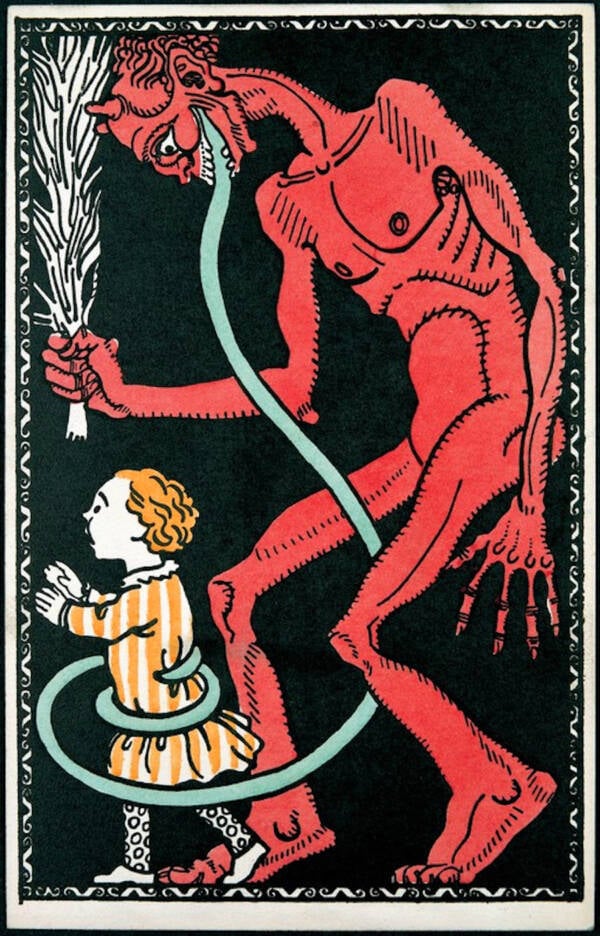 Wikimedia CommonsAn illustration of Krampus with a child. 1911.

By the end of the 20th century, Krampus was back in full force — and in recent years, he’s made the leap across the pond to the United States. He’s had cameos on many TV shows, including Grimm, Supernatural, and The Colbert Report, to name a few.

So if you think Christmas needs a little touch of Halloween, see if your city has a Krampusnacht celebration — and don’t forget to dress up.

Now that you’ve learned about the Christmas legend of Krampus, read the incredible story of the Christmas Truce that was celebrated by enemies during World War I. Then, check out these vintage Christmas ads.