William T. Anderson became known as the deadliest Confederate raider of the Civil War after perpetrating several horrific massacres in Kansas and Missouri. 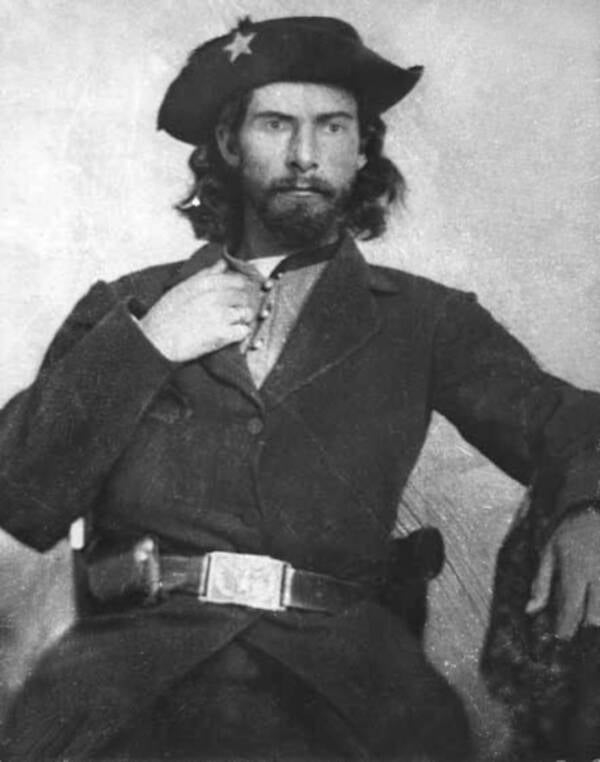 Wikimedia CommonsWhile the armies of the Union and the Confederacy raged in the east, William T. “Bloody Bill” Anderson fought an altogether different and more savage Civil War.

For men like “Bloody Bill” Anderson, the Civil War was much more than a battle to decide the shape of American government or the fate of slavery. To him, one of the most bloodthirsty and sadistic figures of that conflict, it was a golden opportunity to indulge in the cruelest acts of violence and to fuel the hellish anarchy that marked the war in the west.

Anderson’s prodigious talents for bloodshed were such that, by the end of his life in 1864, he’d left a trail of destruction across three states which took just two years to blaze. Even before Union forces finally shot him down in his final gunfight, the man called Bloody Bill had become equal parts legend and infamous nightmare. This is his story. 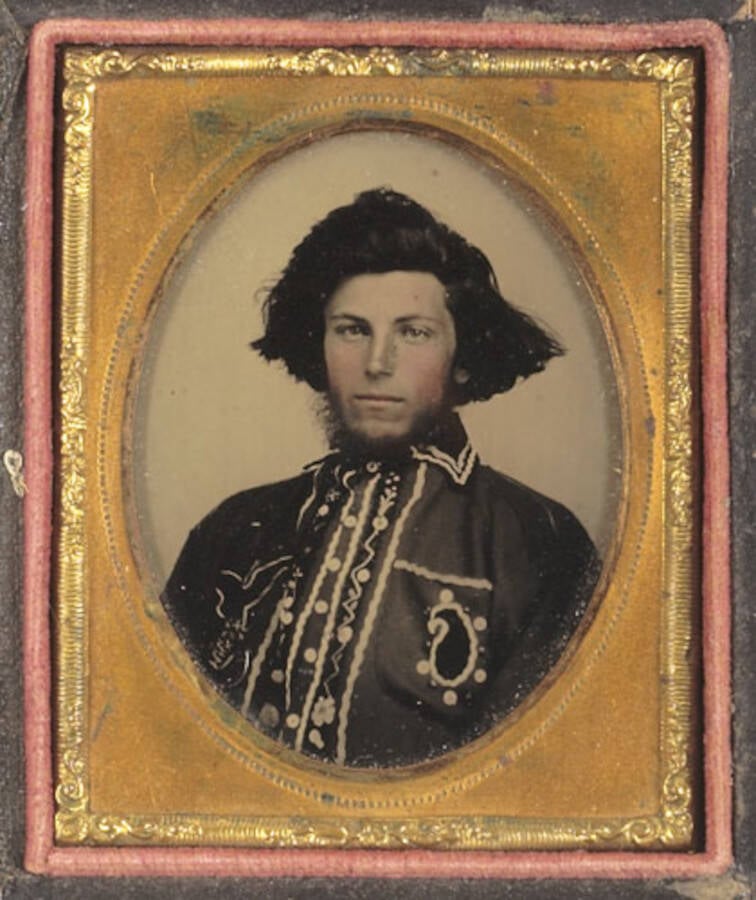 Wikimedia CommonsAt the start of the Civil War, William T. Anderson had no interest in taking sides, instead preferring to further his criminal ambitions in the chaos.

William Thomas Anderson was born in 1840 in western Kentucky. His father, William Senior, had tried his hand at a variety of get-rich-quick schemes including prospecting in the California Gold Rush before taking one last run at success in Kansas, moving his wife and children to his land claim near Council Grove in 1857.

Although the family prospered at first, a devastating drought that struck Kansas in 1861 left them too poor to flee the state. In desperation, Bill, who’d taken a job escorting wagon trains on the Santa Fe Trail, soon began stealing and selling the horses and ponies he was tasked with protecting.

But the trouble really began in April of 1862. Arthur Inghram Baker, the founder of Agnes City and a local businessman of substance, began courting Bill’s sister, Mary Ellen, after the death of his first wife. When Baker then married a local school teacher instead, the Anderson men were outraged and believed that Mary Ellen’s honor had been besmirched.

When Baker then further aggravated them by arresting a cousin of theirs, they demanded that he be released, or Baker’s life would be forfeit. When Baker refused, Bill’s father got drunk one morning, rode to Baker’s house, and attempted to kill him, only for Baker to unload a shotgun in his chest.

Bill and his brother Jim bided their time, even pretending to make peace with their father’s killer. But on July 3, 1862, they lured Baker into the cellar of his store, shot him and his nephew, and burned the building down around them. The whole Anderson clan then fled across the border into Missouri, and the brothers became bushwhackers, violent outlaws who roved the territory ostensibly in defense of slavery and states’ rights.

Becoming A Bushwhacker During The Civil War 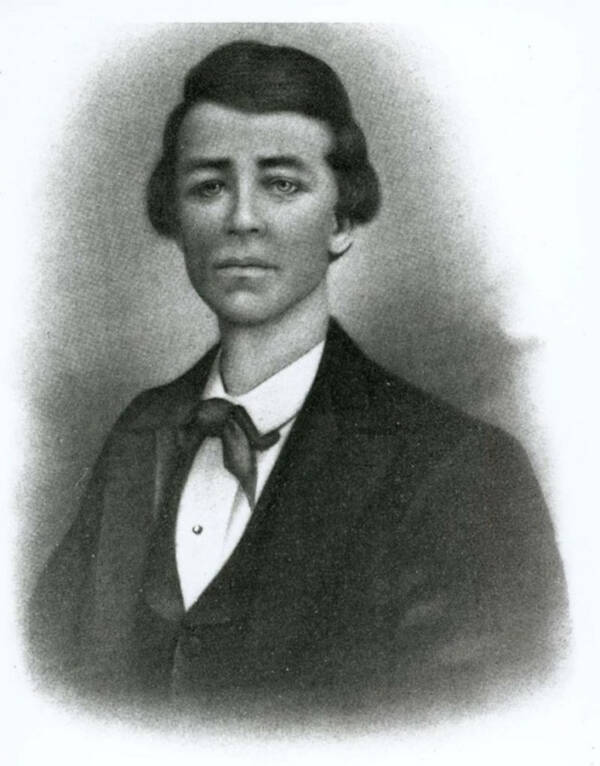 Wikimedia CommonsWilliam Quantrill was one of the most notorious and successful Confederate partisans — and an enemy of the Anderson brothers.

At first, the Anderson brothers robbed pro-Union and pro-Confederacy civilians alike, seeking only to profit themselves. Bill even bluntly told an acquaintance, “I don’t care any more than you for the South … but there’s a lot of money in this business.”

That came to an end when William Quantrill, the most notorious and capable of the bushwhackers, sent a party to confiscate the brothers’ horses and warn them off robbing Southern sympathizers or be shot. This humiliating treatment was the foundation of a long-running resentment between Anderson and Quantrill.

At first serving under bushwhacker captain Dick Yager, Bill Anderson participated in a string of violent robberies throughout western Missouri and eastern Kansas, targeting Union patrols and Union sympathizers while avoiding their pro-Union counterparts, the Jayhawkers.

Desperate to put a stop to the bushwhackers’ raids but powerless to catch them, Union General Thomas Ewing Jr. attempted to force their surrender by targeting their families. In the summer of 1863, he had Anderson’s three sisters arrested and imprisoned in a rickety building in Kansas City. When the building collapsed, one sister was killed and the other permanently disfigured.

A furious Anderson was sure that the collapse had been intentional, an act of cowardly revenge. A few short weeks later, he would earn his nickname while visiting vengeance on an unsuspecting town called Lawrence, Kansas. 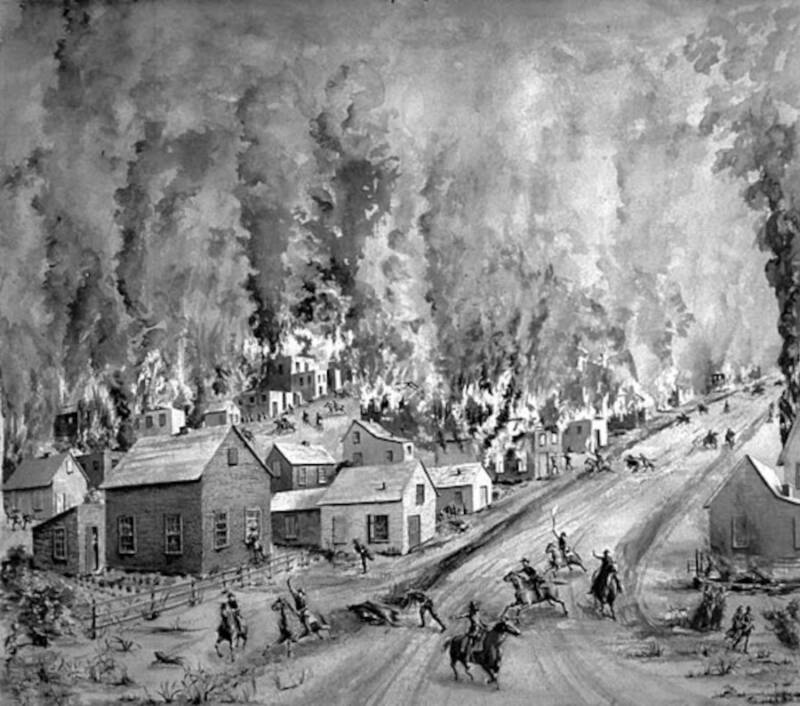 Wikimedia CommonsIn Quantrill’s raid on the Unionist stronghold of Lawrence, Kansas, nearly 200 civilians were murdered by Anderson and his fellow bushwhackers.

William Quantrill had noted with interest how well Dick Yager’s gang had managed to leave a trail of destruction in Kansas while evading Union forces. Inspired, he convinced his fellow bushwhacker captains that their next target should be Lawrence, “the great hotbed of abolitionism in Kansas.” The loot Quantrill’s men could expect, along with the chance to kill Union sympathizers and abolitionists, was more than sufficient temptation.

William Anderson, however, had a more personal motive. When the 400 screaming bushwhackers swooped into the undefended town, he wordlessly killed no fewer than 14 men and teenage boys, forcing them to beg for mercy before he coldly shot them in front of their families.

For Anderson, the guerrilla war in Kansas was no longer about filling his pockets. Instead, it was about killing as many Union soldiers as he could find. He told a Lawrence woman shortly before leaving the city, “I’m here for revenge and I have got it.” But the truth was that he was far from finished.

Weeks after the horror at Lawrence, Anderson, by now a fully-fledged bushwhacker chieftain, took part in an attack on Fort Blair, a minor Union outpost near Baxter Springs, Kansas. The ensuing fight was a humiliation for Union commander James G. Blunt, who fled the field as his men were butchered and was later accused of drunkenness on the day of the battle. The Quantrill band then crossed the border into Confederate Texas to spend the winter in safety. 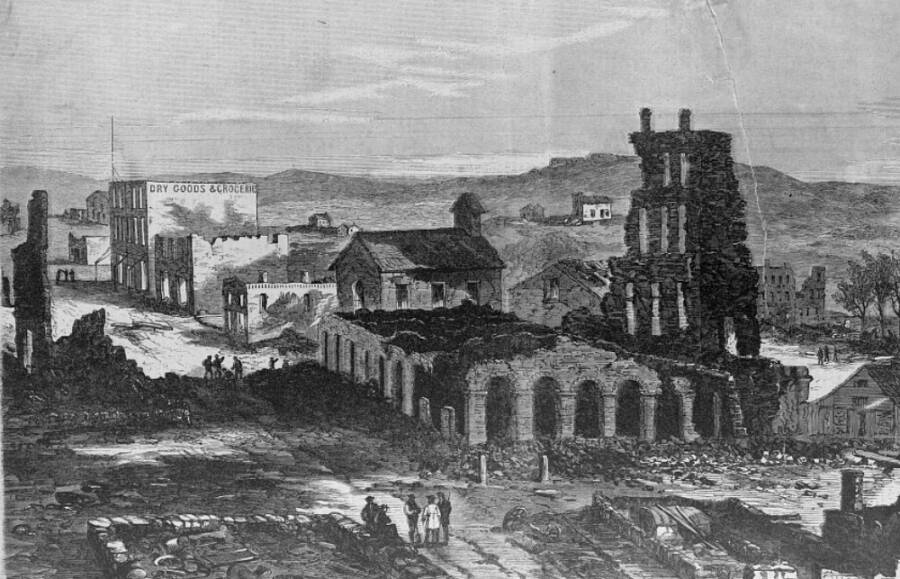 Library of CongressAfter Quantrill’s attack left Lawrence a smoldering ruin, the guerrillas headed south to Texas, where infighting led Anderson to form his own band.

While in Texas, growing tensions finally led Anderson to break with Quantrill and even attempt to arrest him. Finally free of the senior bushwhacker, Anderson led his gang back into Missouri in the spring for a fresh round of brutality.

With Gettysburg lost and the Confederacy’s eastern armies on the defensive, many of the bushwhackers recognized that they had no hope now of winning, and were interested only in using the chaos to their advantage as long as they could.

Accompanied by his diminutive teenaged lieutenant, “Little” Archie Clement, a psychopath with a particular fondness for scalping and mutilating his victims with knives, Anderson left a fresh wake of murder and misery. He was, in the words of one observer, “like the rider of the ‘pale horse’ in the Book of Revelation, death and hell literally followed in his train.” By this time, other bushwhacker leaders had been eclipsed or killed, and Bloody Bill Anderson was now the most feared guerrilla leader in the west.

By September 27, 1864, Union forces were closing in, the Confederacy was crumbling, and Anderson’s one passion in life was murdering Union troops. His greatest opportunity came that day when he and 80 of his men, including a young Frank and Jesse James, dressed in stolen blue uniforms, entered Centralia, Missouri, looted the town, and stopped a train passing through.

After separating the soldiers aboard, they ordered them to strip naked and began shooting them, finally mutilating and scalping the bodies and taking a single prisoner. Later in the day, a Union detachment rode into town to challenge Anderson. Of the 147 federal troopers, 123 were killed. Anderson would later remark that “I have killed Union soldiers until I have got sick of killing them.”

The Death Of Bloody Bill 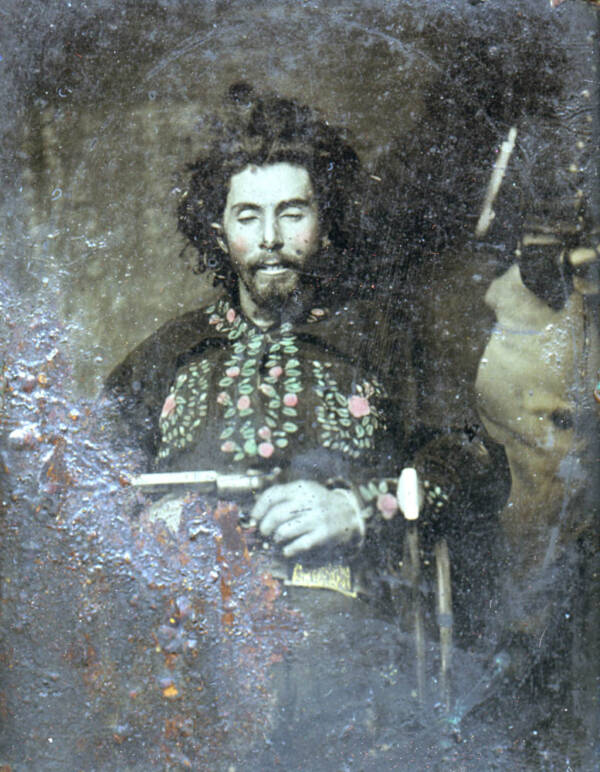 In early October 1864, Anderson and his men attached themselves to the army of Confederate General Sterling Price, then undertaking a mission to “liberate” Missouri. Anderson diverted from the raids he was assigned to carry out to attack Glasgow, Missouri. He’d heard that Benjamin Lewis, a wealthy, prominent Union sympathizer, lived in the town and had freed all his slaves.

Bloody Bill and his adjutant, Ike “Weasel” Barry, entered Lewis’ house heavily drunk and proceeded to beat him to within an inch of his life, stomping on him, cutting him, ramming a pistol barrel in and out of his throat, and trampling him with a horse Anderson had specially trained to do so. After raping Lewis’ 13-year-old Black servant, they demanded $5,000, which desperate female relatives got. Lewis would die of his injuries months later.

Anderson had only been active for just over two years, but by then it was enough. Union commanders deputized Lieutenant Colonel Samuel P. Cox, a man they were sure “would find and whip Anderson,” to lead a manhunt.

At the head of 150 men, Cox rode north to the village of Albany, Missouri, where he’d been told he would find the notorious bushwhacker. Believing themselves to be dealing with another force of raw recruits, Anderson’s gang charged the Union line in the early afternoon of October 26, 1864. Cox’s men’s disciplined firing broke the charge and felled half a dozen rebels.

One of the bodies discovered was that of William “Bloody Bill” Anderson, a bullet hole drilled through his head behind the ear. The most hated, feared man in Missouri was, at long last, dead. He was 24 years old.

Anderson faded into the footnotes of the Civil War as the greater victories in the east captured national attention. Where he was known was mainly as an accomplice to Quantrill. He did leave a sordid legacy as the man who introduced the James brothers to outlawry, and when Asa Earl Carter published his now-classic revisionist Western masterpiece, The Outlaw Josey Wales, Anderson was portrayed, perversely, as a righteous avenger on a crusade against Yankee invaders.

Now that you know the disturbing true story of Bloody Bill Anderson, read about the hellraising life of Jesse James, his most notorious protégé. Then, read the dark facts about the Nueces massacre, when Confederate troops slaughtered Unionist German immigrants for resisting conscription.