Inside The Nueces Massacre, When Confederate Soldiers Murdered German Immigrants For Opposing Slavery

On August 10, 1862, Confederate troops slaughtered a group of German Texans who were attempting to join the Union Army. 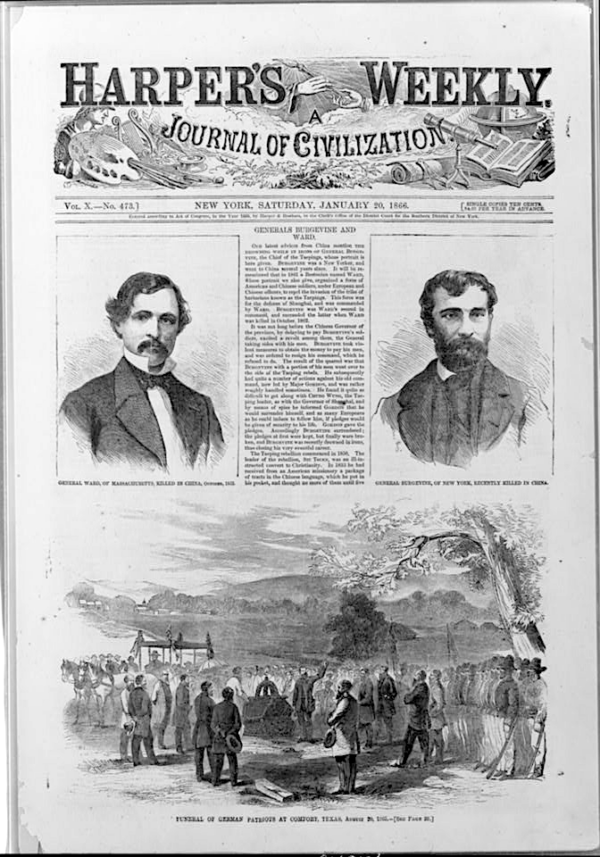 Wikimedia CommonsNews coverage in Harper’s Weekly detailing the 1866 funeral for the victims of the Nueces Massacre.

A year after the United States erupted in Civil War, Texas Hill Country saw internal bloodshed of its own. The area was divided between German immigrants who opposed slavery and the Confederates who enforced it. On Aug. 10, 1862, those tensions boiled over in a brutal slaughter known as the Nueces Massacre.

Numbering about 20,000, German Texans accounted for five percent of the population of Texas at the beginning of the Civil War. They were Catholic, and most supported anti-slavery and pro-Union causes.

Shortly afterwards, a county treasurer named Fritz Tegener organized a band of more than 60 men to flee to Mexico, then on to New Orleans where they could join the Union in the war. But before they even made it out of Hill Country, 36 would be dead at the hands of Confederate soldiers.

How The Nueces Massacre Began 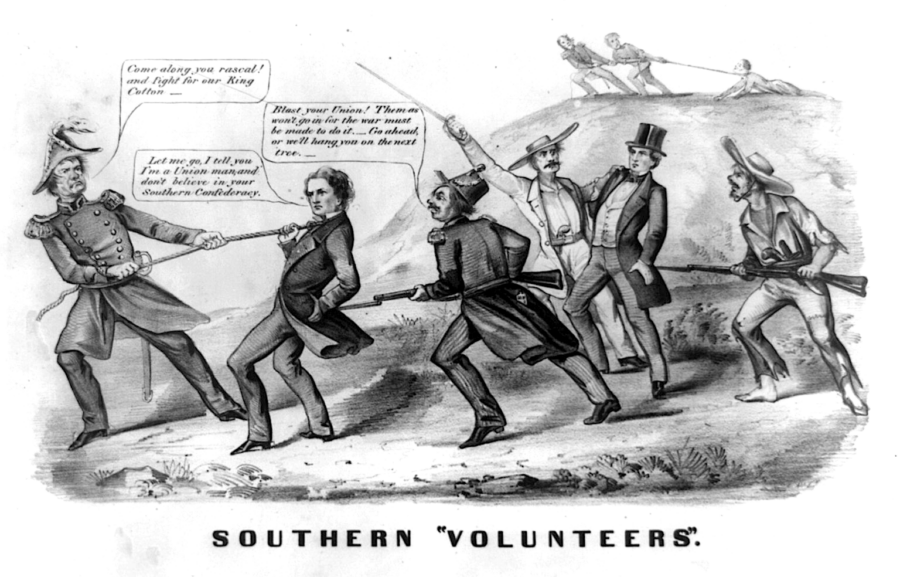 Wikimedia CommonsAn illustration of forceful conscription into the Confederacy, which German Texans opposed.

The massacre on the Nueces was decades in the making. In 1831, a former German military man Frederick Ernst became the first German to move his family to Texas.

His effusive praise in letters sent back home were widely shared and spurred a pan-Atlantic exodus. Ernst had acquired substantial land, and sold lots to countless Germans who settled in Hill Country for a better life.

German Texans also saw slavery as a human indignity, and actively agitated for its abolition in the state before the Civil War broke out.

Then, the Confederacy seceded from the Union, and Texas along with it. The Conscription Act of 1862 required most men to enlist, or else be forced to or pay to get out of service. Slaveholders, however, were exempt.

And throughout the Confederacy, habeas corpus had been suspended for crimes like treason, desertion, espionage, and conspiracy to overthrow the government. An oath of allegiance to the Confederacy was drawn up for all citizens to sign. 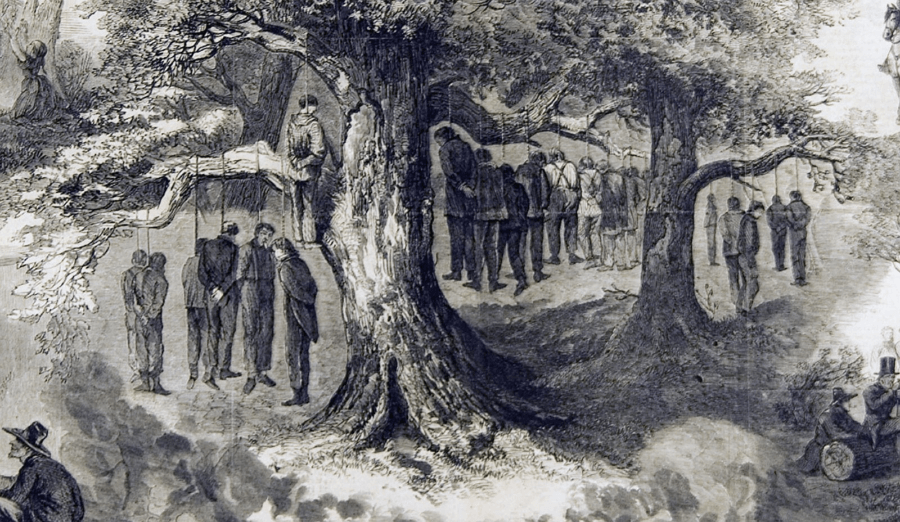 Wikimedia CommonsAn illustration of 41 suspected Unionists hanged in Texas in 1862.

But many German Texans refused. In retaliation, the local militia burned their farms and pillaged their homes. Captain James Duff was in charge of the Confederate troops in the area, and arrested dozens of German Texans, and he killed at least 20 men for resisting.

With no time to waste, those determined to flee their new police state made haste. A simple citizen and county treasurer in Comfort, Texas, Fritz Tegener opted to lead at least 60 others away to join the Union cause. On Aug. 1, 1862, his band of refugees fled Hill Country. But Captain Duff caught wind of their plans.

Massacre On The Nueces 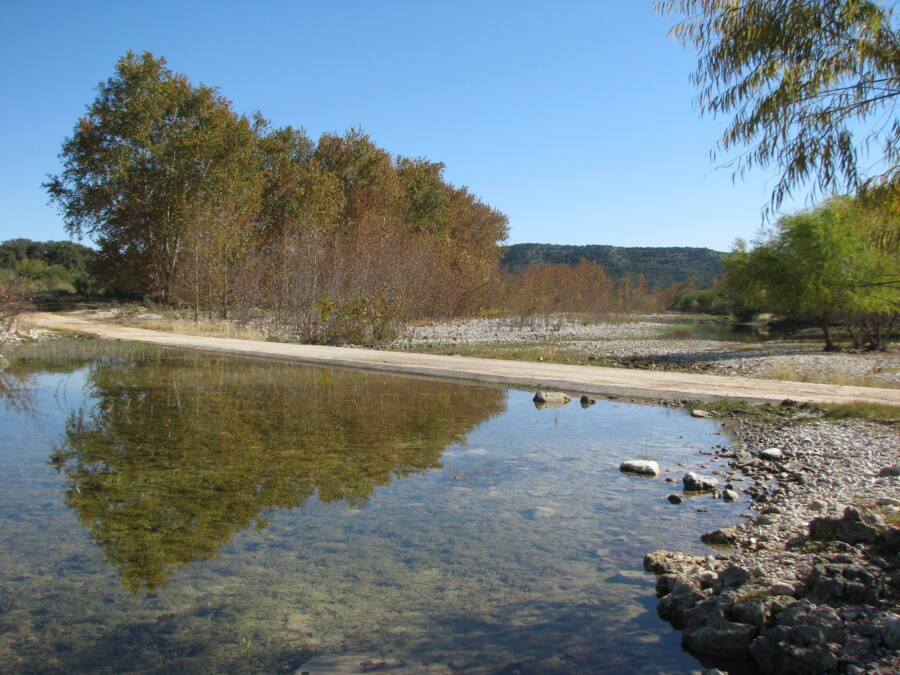 With arms and provisions packed, Tegener’s merry men of peace gathered at Turtle Creek 19 miles from his home in Comfort to depart. While many urged him to set a faster pace, Tegener implemented a leisurely one with frequent stops. Duff dispatched 96 men, led by First Lieutenant Colin McRae, to pursue them on Aug. 3.

It less than a week of riding for McRae and his men to spot Tegener’s group. The German Texans had settled on the banks of the Nueces River, some 70 miles northeast of Mexico’s border, dangerously unaware they had been beset on all sides by Confederate men.

McRae encountered the group mid-afternoon on Aug. 9, yet decided to ambush the group in the dead of night. According to the law governing the suspension of habeas corpus in Texas, however, McRae only had the authority to arrest the men, not attack, let alone kill.

Tegener and his men had made camp for the night and set two guards at the perimeter for the others to sleep. McRae ordered his men to attack by two columns, using interlocking fire, but not to do so until he shot his pistol first. Around 1 a.m. on the morning of Aug. 10, McRae saw the guards and fired his pistol.

Almost immediately, his plan fell apart. His soldiers began a haphazard charge, firing at will. Tegener and the German Texans were initially able to repel them, but lost at least 19 in the shooting. Another 15 were wounded. By the time Tegener regrouped, McRae and his subordinate, Lieutenant Edwin Lilly, were able to push through the camp. 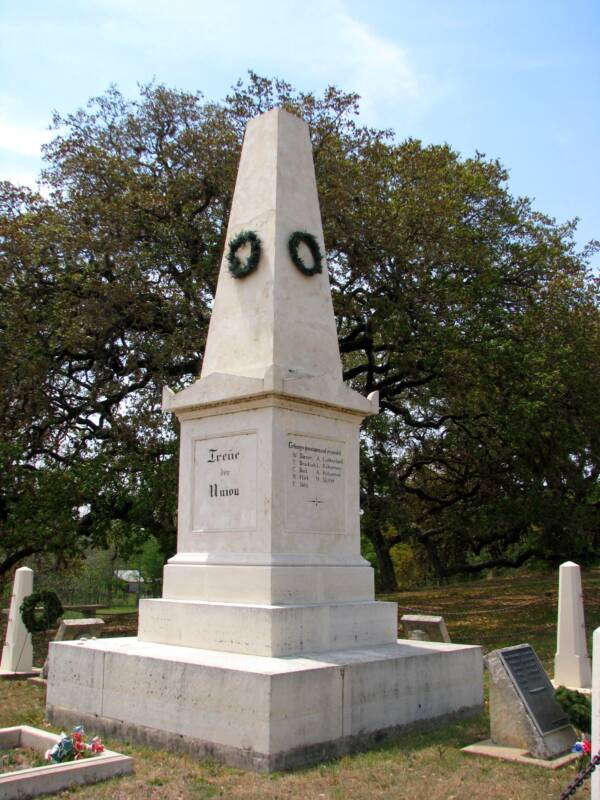 Flickr/mlhradioThe “Treue der Union” monument at which the Unionists’ remains are interred.

By dawn, the fight was over. The rest of Tegener’s party had fled to the Rio Grande or home. McRae ordered the wounded to be taken prisoner, but then Lilly ordered them executed. Nine were shot through the back of the head.

McRae was one of the 18 Confederates wounded in the massacre. Another two Confederates had been killed. As McRae ordered his men buried, he left the German Texans to rot.

As for the rest of the Unionists who managed to escape, they did so with varying success. Eight were found and killed trying to enter Mexico in October, while 11 made it home, and the others reached Mexico or California.

It was only after the war was over that the German Texans who stayed behind were able to travel to the site of the massacre and retrieve their dead.

On Aug. 10, 1866, they buried what remains they could find and erected a monument at the site to their anti-slavery sons, brothers, and fathers. It reads Treue der Union, “Loyalty to the Union.”

And, outside of cemeteries and battlefield memorials, it remains the one and only monument to the Union honoring men in any former Confederate territory.

After learning about the Nueces Massacre, read about militant abolitionist John Brown and his fight to end slavery. Then, learn about the Kent State Massacre in 24 heartbreaking photos.