These rarely-seen photographs of the Kent State Massacre provide a harrowing look at the day the '60s died.

On May 4, 1970, at Ohio’s Kent State University, four American citizens were murdered by their own government. A line of 29 men of the Ohio National Guard marched up before a group of unarmed protesters and opened fire, killing four and wounding nine others. It’s an episode now burned into history as the Kent State Massacre.

The students were calling for peace. They were protesters demonstrating against the Vietnam War and against America’s intention to move into Cambodia. Too many soldiers had died — the protesters thought — many of them students whose names had come up in the draft lottery. The students wanted the killings to stop.

On May 1, 500 students filled the Kent State campus, where they marched and made speeches that terrified some of the people around them. One pulled out a copy of the United States Constitution and burned it, trying to demonstrate how Nixon had violated it – but some didn’t quite understand. Some saw the protestors as a danger.

The protesters continued on for the next few days, with the crowd growing larger. By May 4, the day of the Kent State Massacre, there were 2,000 people on the campus handing out leaflets, making speeches, and standing up to demand peace. 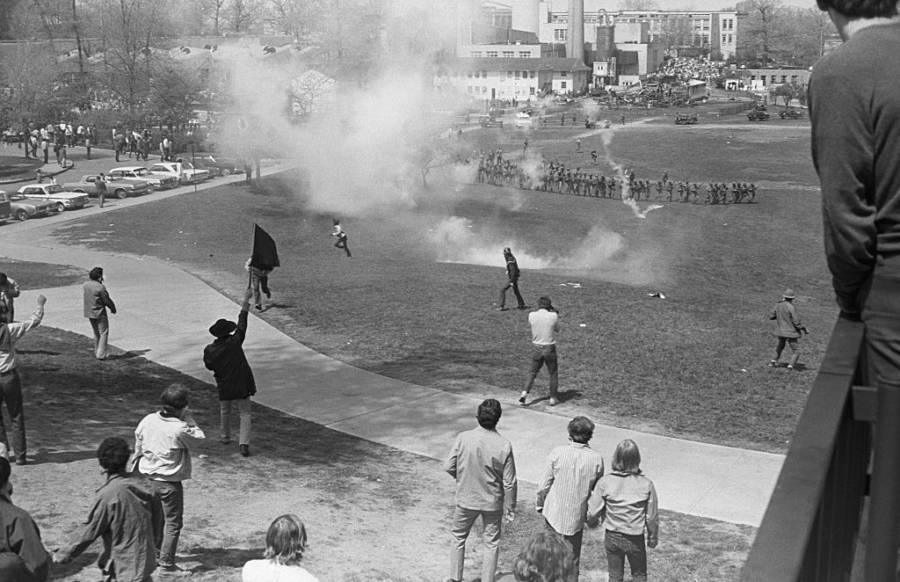 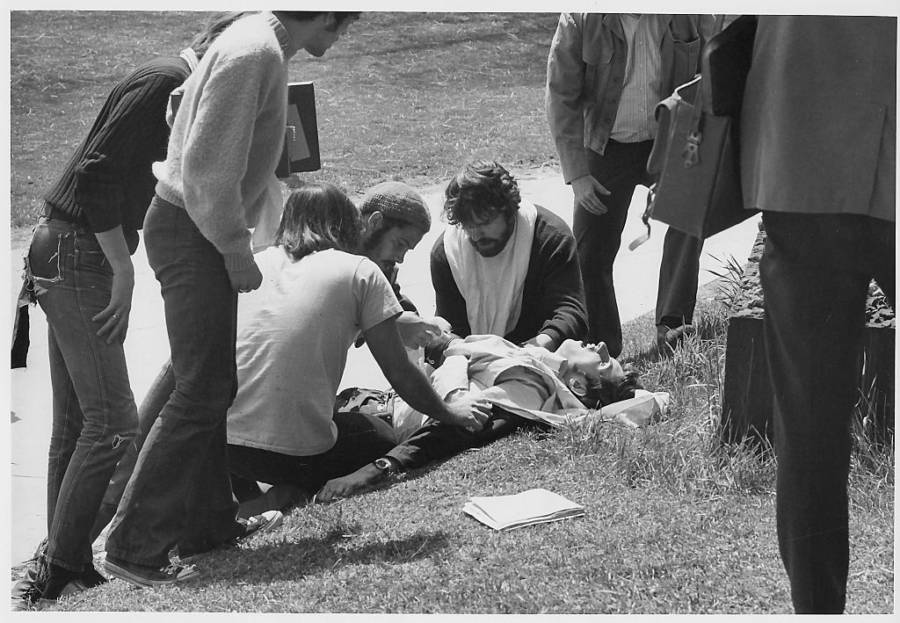 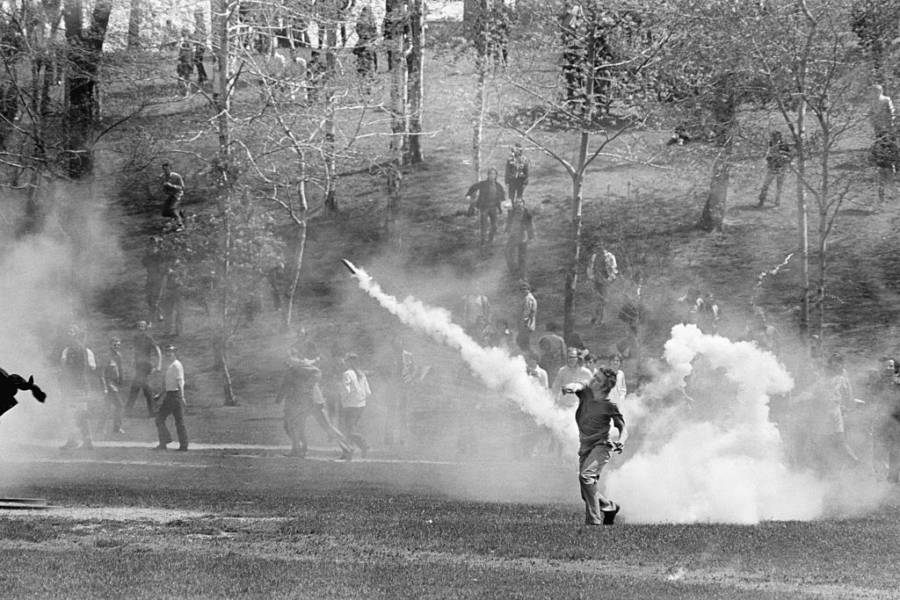 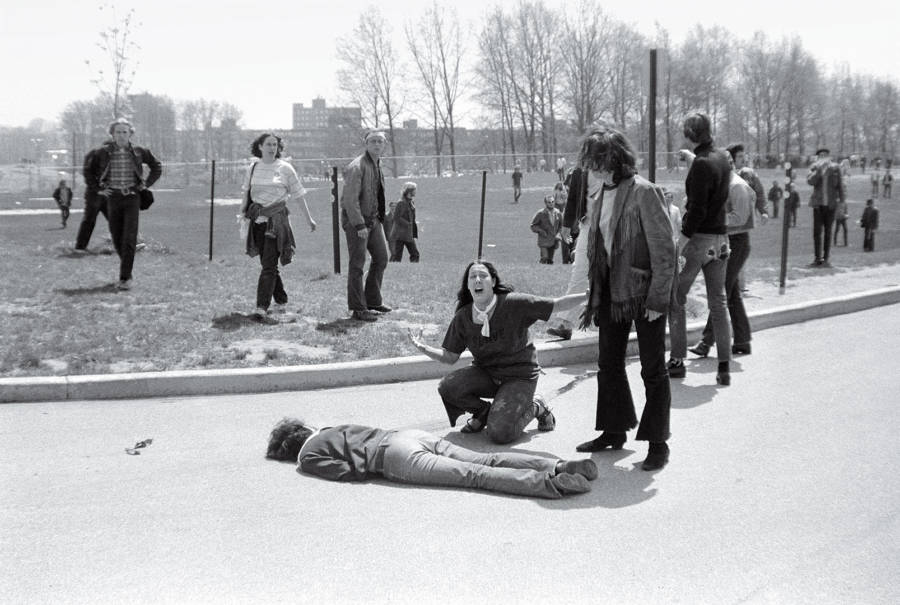 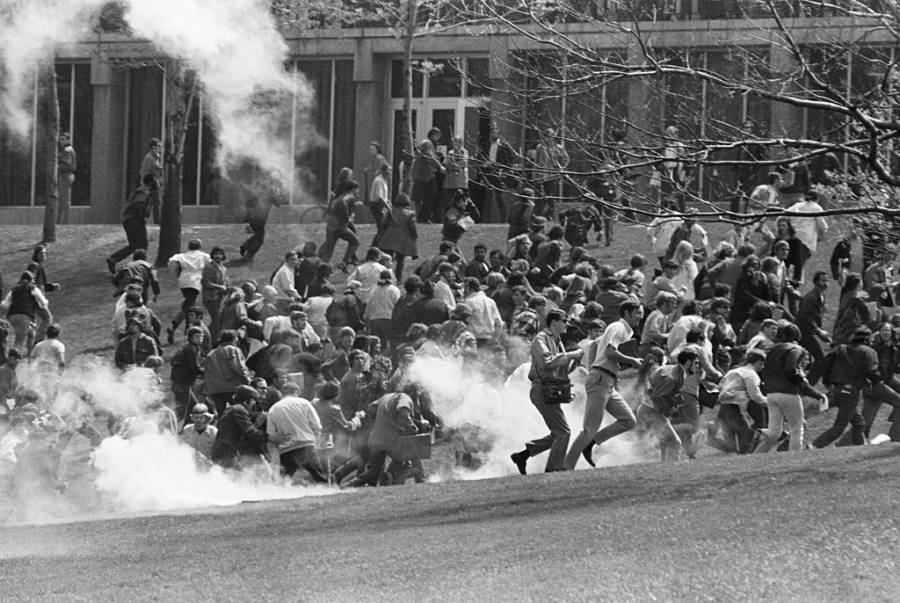 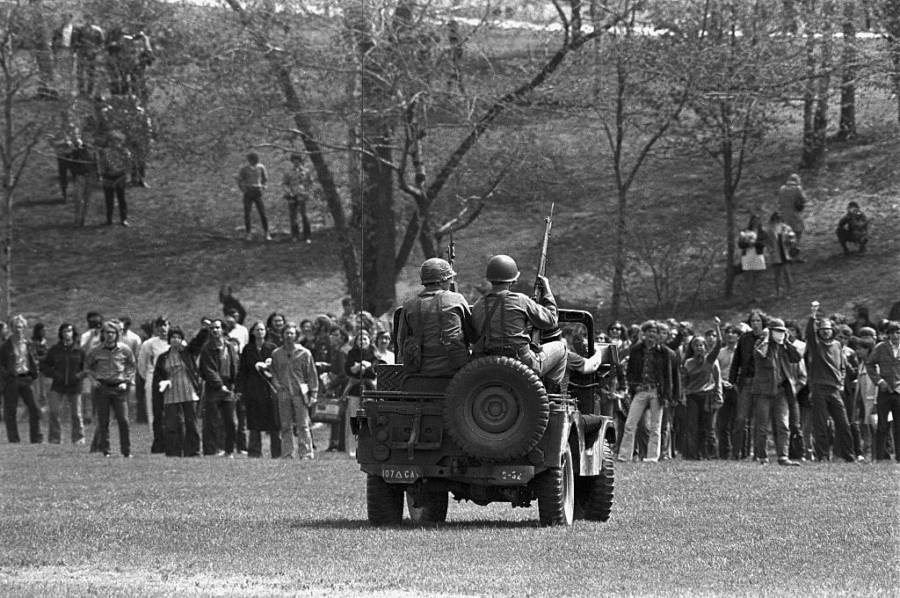 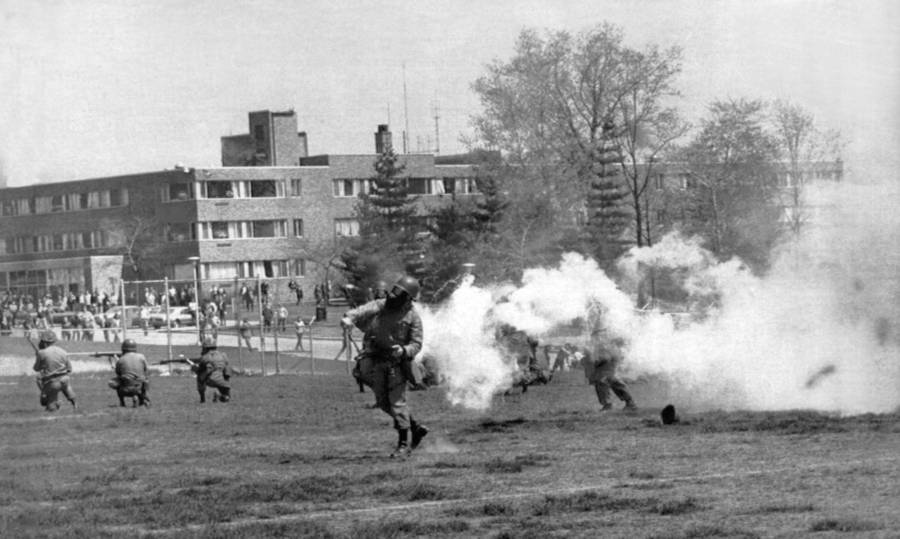 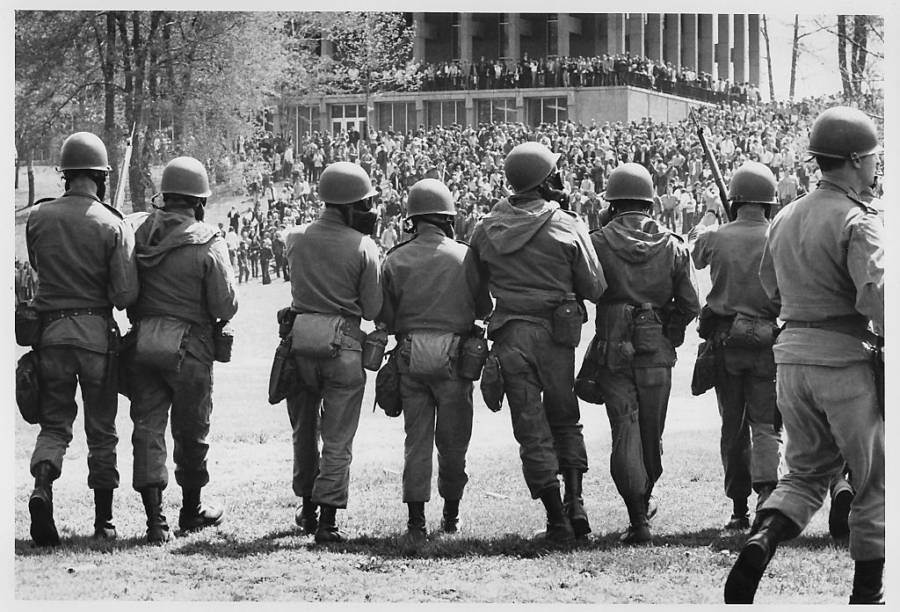 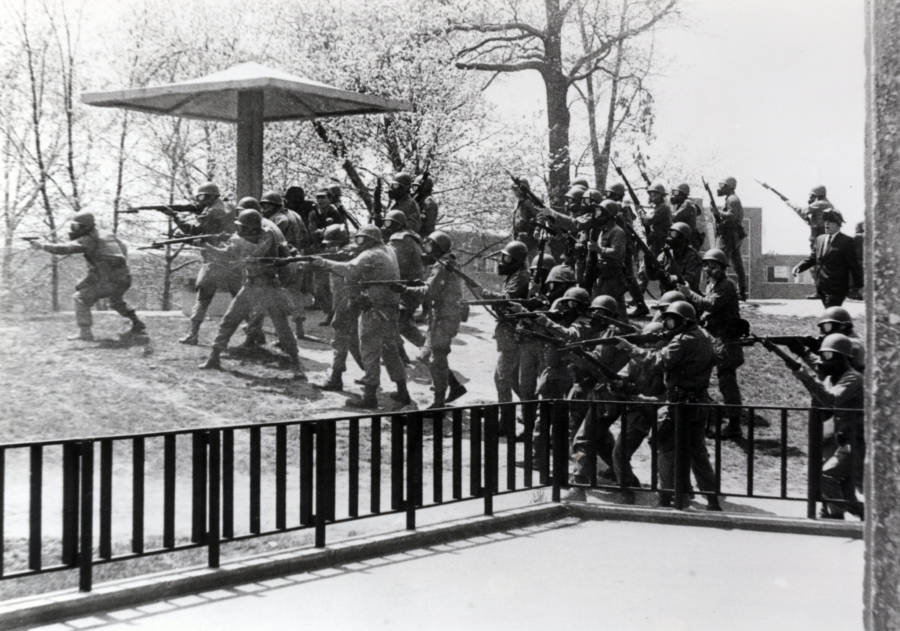 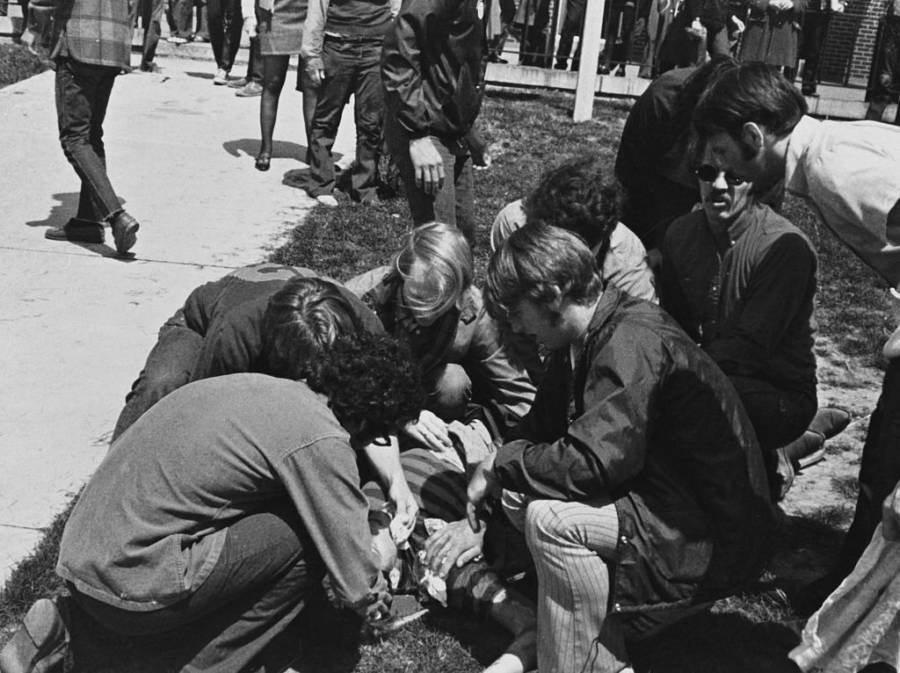 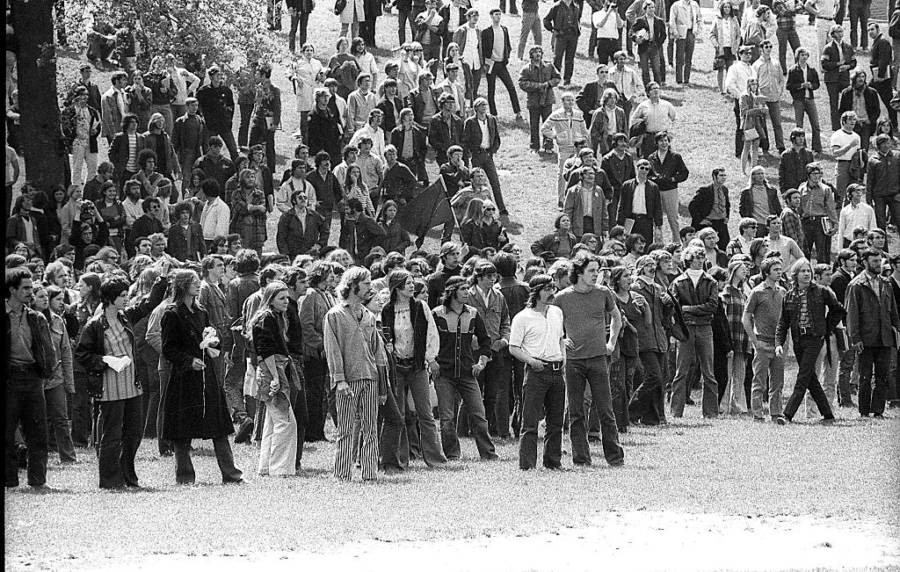 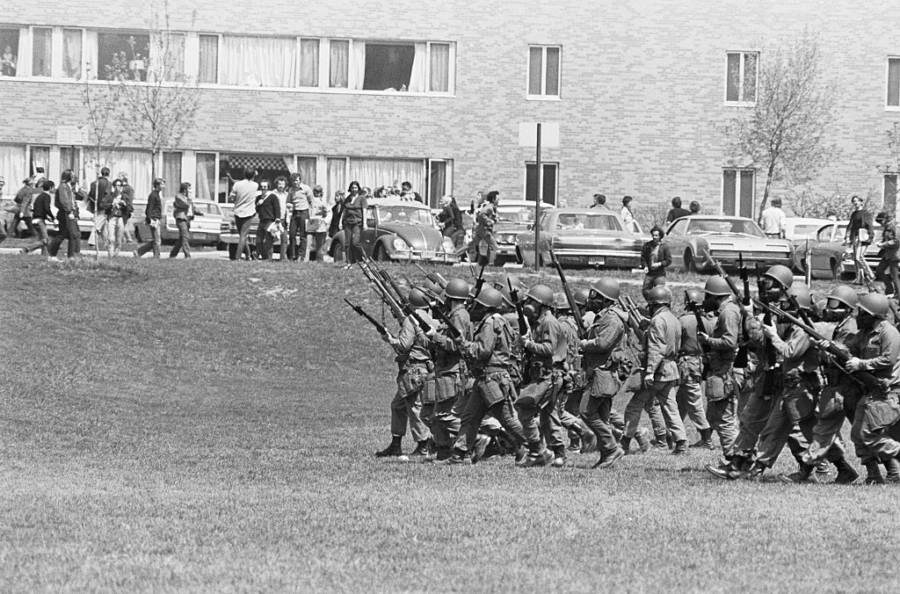 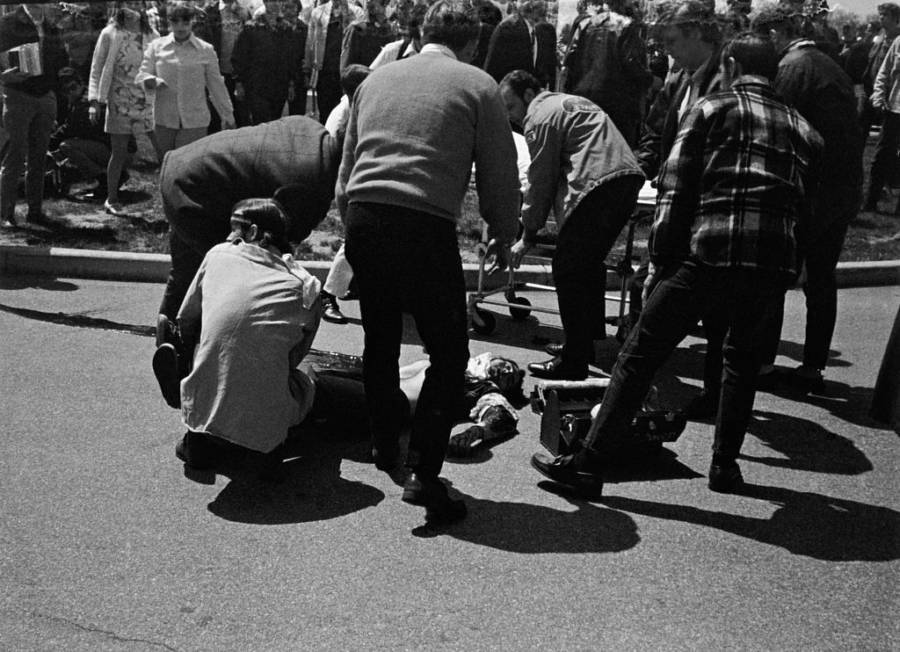 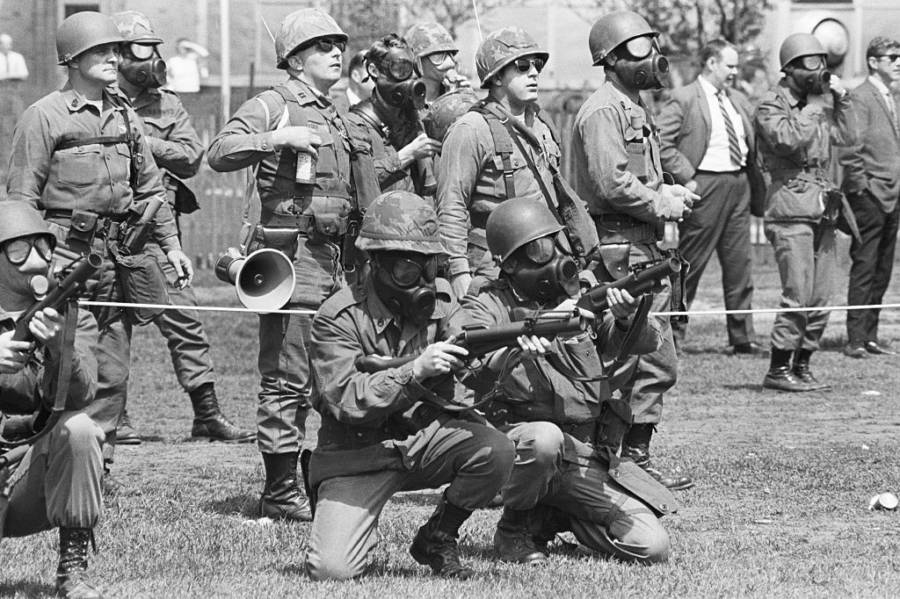 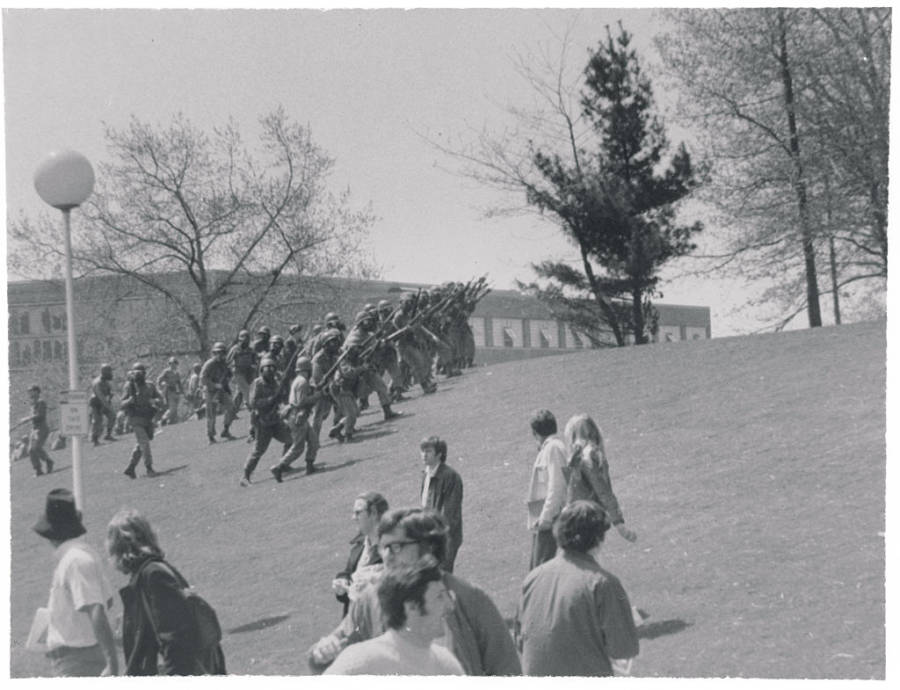 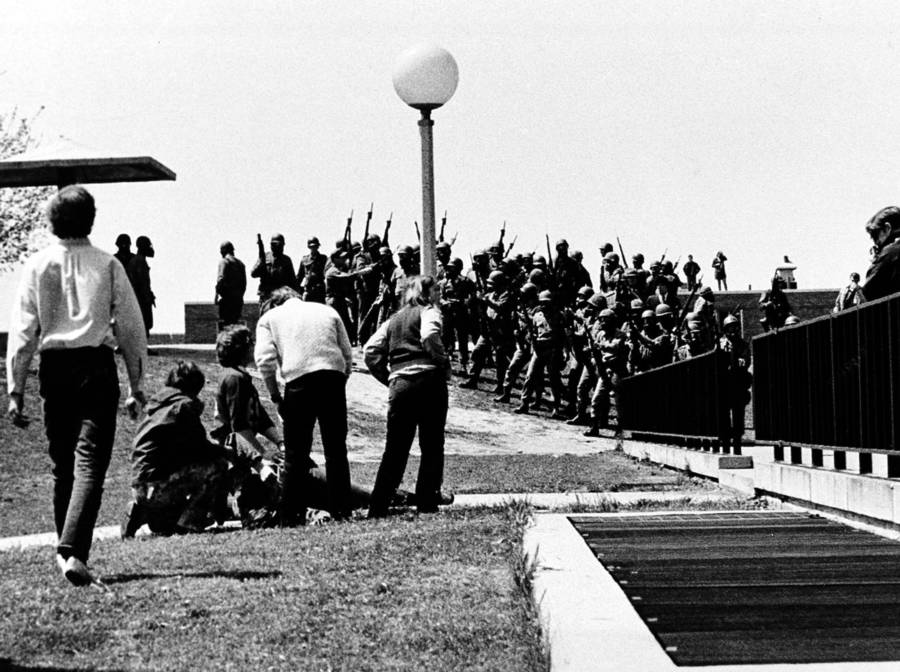 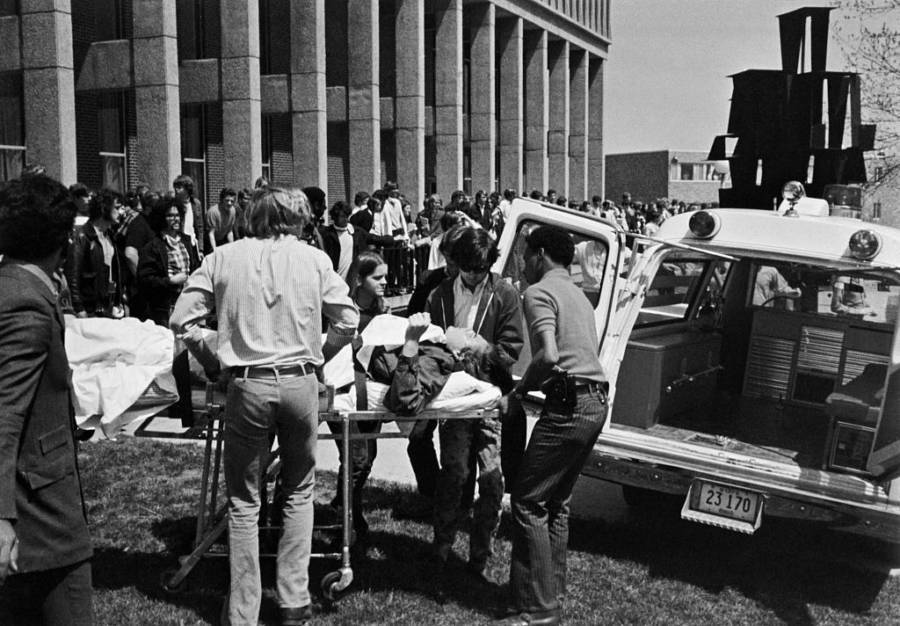 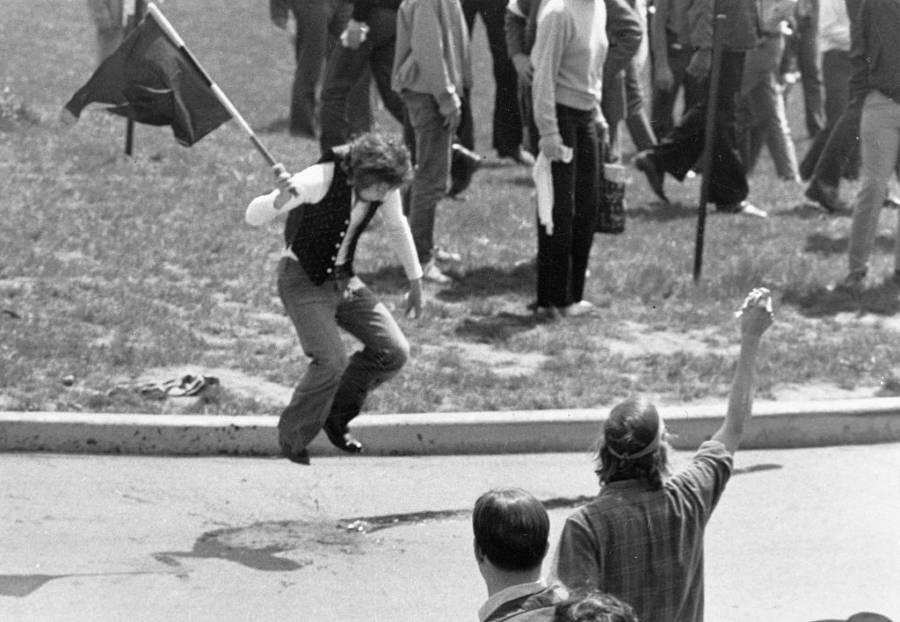 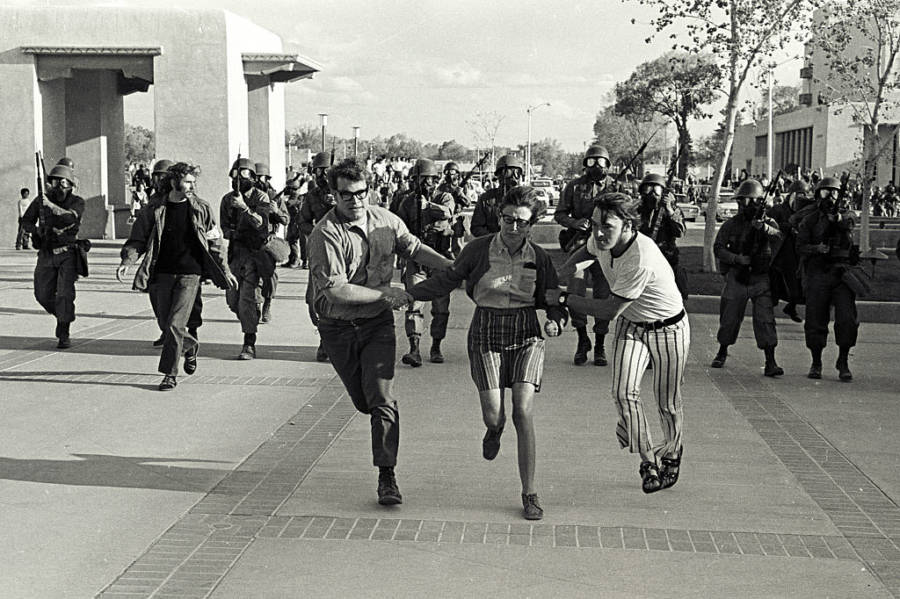 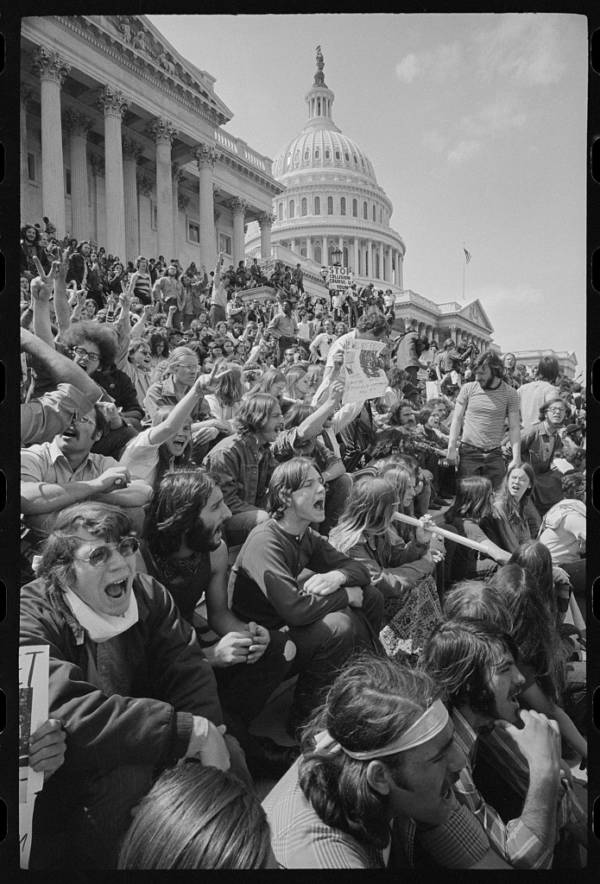 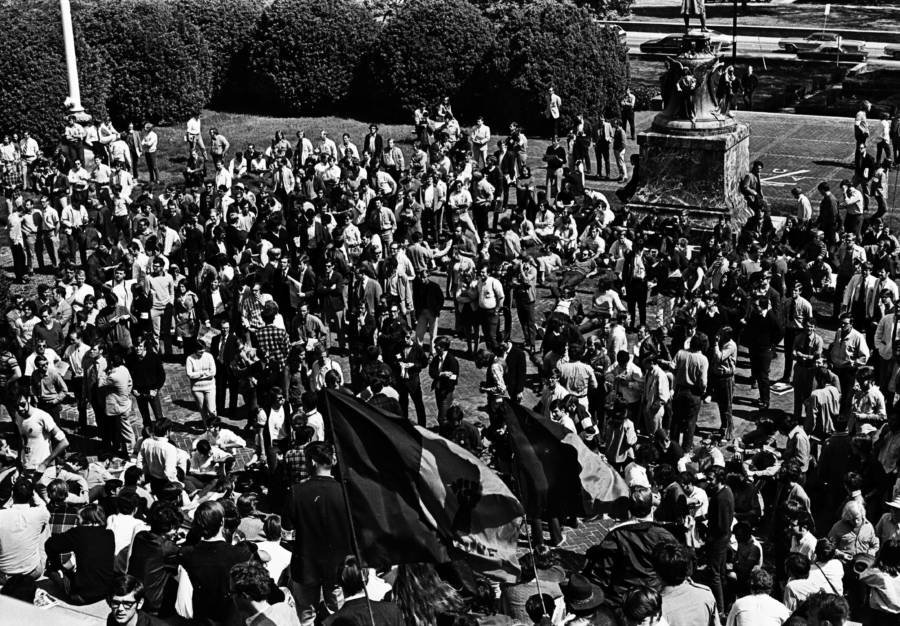 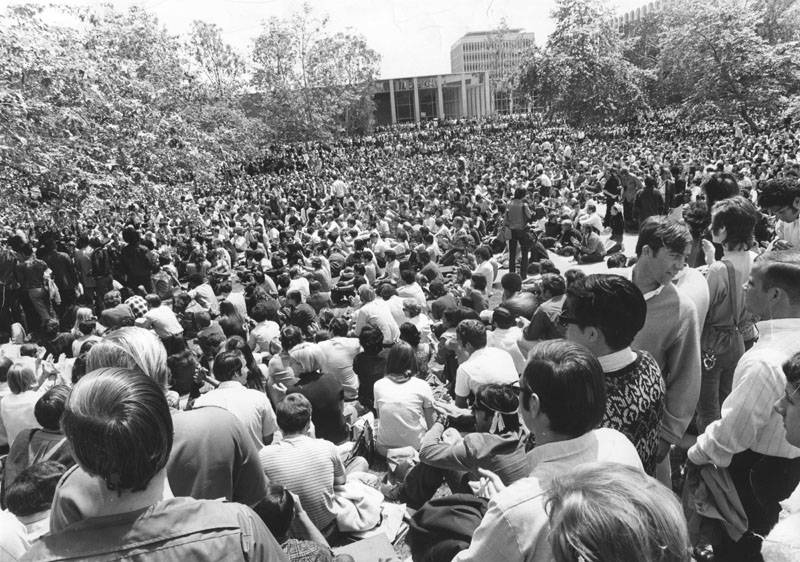 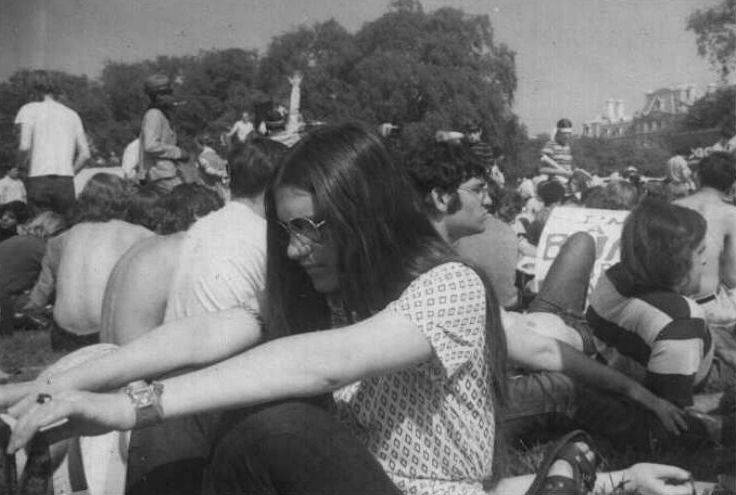 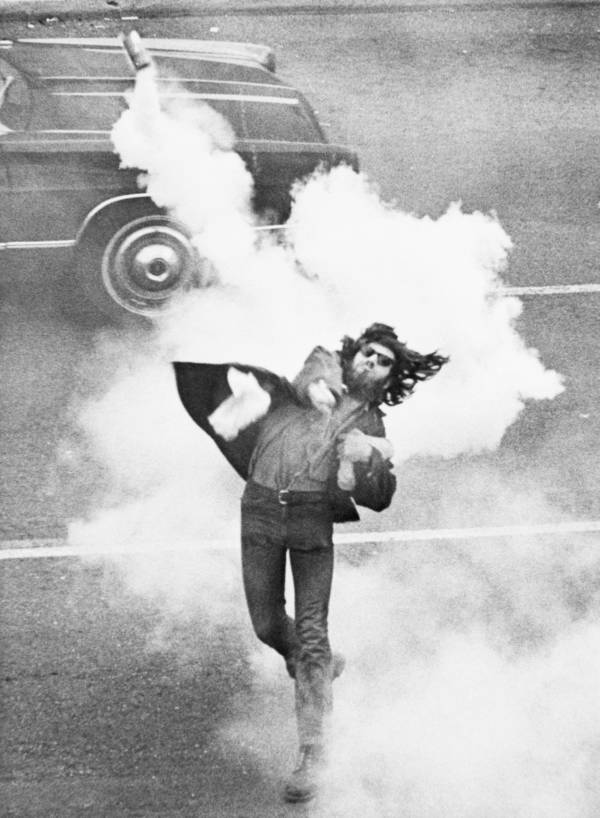 Washington, D.C. May 5, 1970.Library of Congress
21 of 25
Students on strike storm the University of Virginia, standing up for those who died at the Kent State Massacre.

Charlottesville, Virginia. May 6, 1970.Arthur J. Morris Law Library/University of Virginia School of Law
22 of 25
A crowd of 9,000 students on strike, protesting the massacre at UCLA, boo their chancellor as he comes out to plead for them to calm down.

Los Angeles, California. May 7, 1970.Los Angeles Public Library
23 of 25
Protesters at a sit-in at the Capitol join the nationwide student strike in protest of the massacre.

Washington D.C. May 9, 1970.Squirrel Cottage/Flickr
24 of 25
The National Guard at UCLA tries the same tactic again the day after the massacre.

This time, the students are ready for them. This student grabs the tear gas canister and throws it right back. Nervous about what these people would do, the state sent in the National Guard and ordered the demonstrators to disperse. However, they weren't ready to leave. Some hurled rocks at the National Guardsmen and chased them away. But soon the guardsmen came back, this time with gas masks, tear gas, and rifles.

The National Guardsmen hurled tear gas into the crowd and chased the people who fled. Then, when some demonstrators wouldn't leave and tried to hurl the tear gas back at them, they pulled out their rifles and opened fire.

"The crackle of the rifle volley cut the suddenly still air," John Kifner, a New York Times writer who was on the scene, wrote. "It appeared to go on, as a solid volley, for perhaps a full minute or a little longer." Kifner watched as the students next to him fell to the ground, one shot in the head, another hit in the back, and saw them bleed out onto the concrete of their school parking lot.

"I was a white hippie boy, and then I saw exit wounds from M1 rifles out of the backs of two people I knew," another witness, Gerald Casale, who would later become a member of the band Devo, recalled. "None of us knew, none of us could have imagined... They shot into a crowd that was running away from them!"

Over the next few days, 4 million people came out in protest of the Kent State Massacre. Anti-Vietnam campaigns became bigger than ever and the way the United States responded to protests changed forever.

After seeing photos of the Kent State University shootings, check out these photos of anti-Vietnam War protests. Then, allow these 1960s photos to show you the upheaval of America's most tumultuous decade.