The Mysterious Death Of Bob Crane, The ‘Hogan’s Heroes’ Star Who May Have Been Murdered Over His Sex Tapes

Actor Bob Crane was savagely bludgeoned to death in Scottsdale, Arizona, just two weeks before his 50th birthday — and the murder remains unsolved to this day. 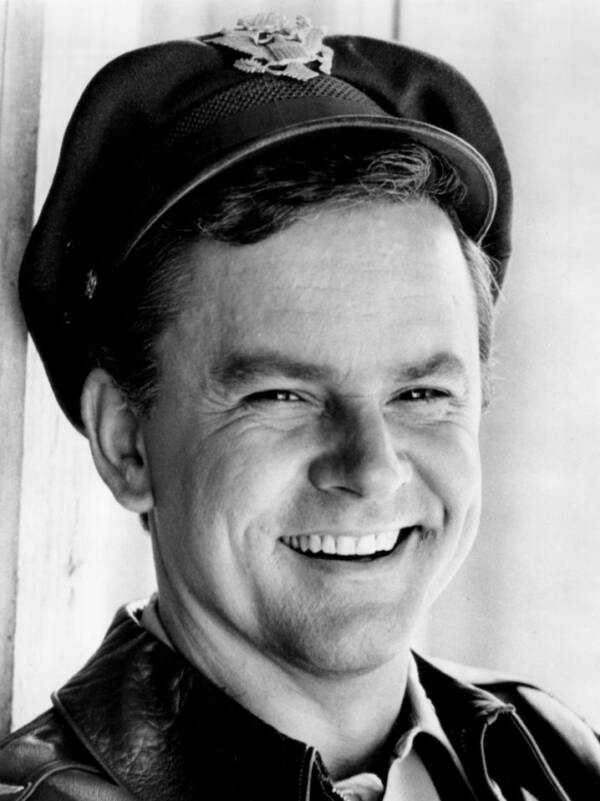 In the 1960s, actor Bob Crane became a household name seemingly overnight. Cast as the titular jokester in the popular sitcom Hogan’s Heroes, his mischievous face and wisecracking antics onscreen were cherished by millions.

Then, in 1978, those same viewers were baffled by the grisly scene of Bob Crane’s death when he was found brutally murdered in his Scottsdale, Arizona, apartment.

The once-popular actor had suffered a waning career after Hogan’s Heroes went off the air, seeing him follow the dinner theater circuit to Scottsdale to self-produce a play called “Beginner’s Luck” at the Windmill Theater. Then, on June 29, he missed a lunch meeting with his co-star Victoria Ann Berry, who discovered his body and notified the police.

When they arrived at unit 132A of the Winfield Apartments, police found the room covered in blood from wall to ceiling. Crane’s shirtless body lay in bed, and his face was nearly unrecognizable. An electrical cord had been wrapped around his neck. And almost half a century, five books, and three investigations later, his killer remains elusive.

Robert Edward Crane was born on July 13, 1928, in Waterbury, Connecticut. He spent his teenage years playing the drums and organizing marching bands. He knew he wanted to be in show business and used music as his ticket. Crane joined the Connecticut Symphony Orchestra while still in school, and graduated in 1946.

After a stint in the Connecticut National Guard, Crane took to local radio and became a fledgling tristate area broadcaster. His witty disposition led CBS to hire him as a host at their flagship KNX station in 1956. He interviewed Marilyn Monroe, Bob Hope, and Charlton Heston. 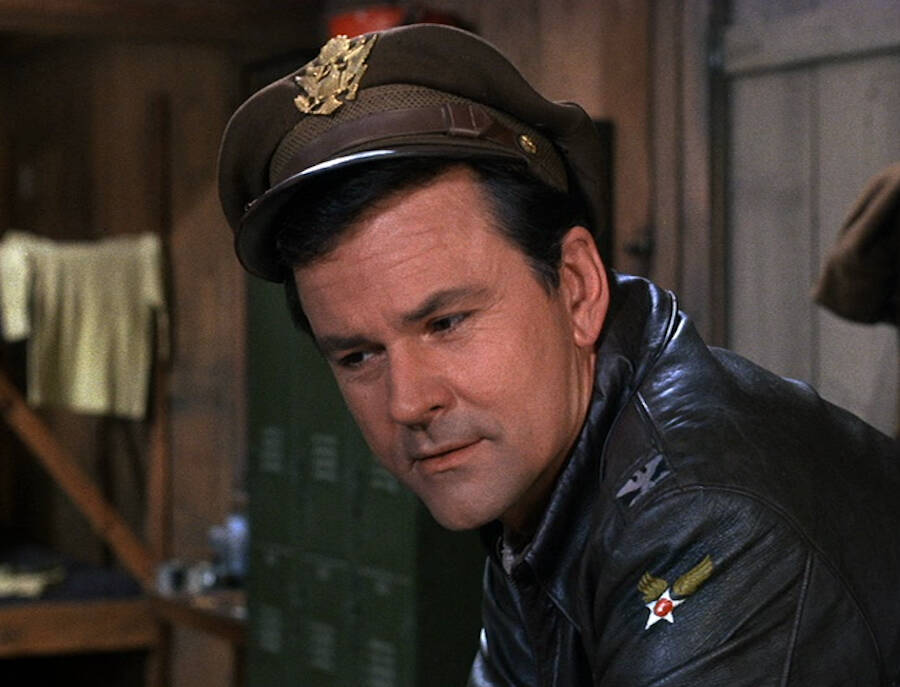 Actor Carl Reiner was so impressed by Crane that he offered the radio host a guest spot on The Dick Van Dyke Show. That led to a role on The Donna Reed Show. Crane’s agent became inundated with offers and soon sent him a controversial script that Crane initially mistook for an insensitive drama.

“Bob, what are you talking about? This is a comedy,” said the agent. “These are the funny Nazis.”

Hogan’s Heroes premiered in the fall of 1965 and was an immediate success. Despite being a sitcom with a laugh track, it stood out with risqué World War II humor that saw Crane’s titular character pull the rug out from under Nazi officers.

However, when executives found out, Crane’s career dried up.

One of Crane’s mistresses was Hogan’s Heroes co-star Patricia Olson. She became his second wife in 1970, and the couple had two children. With Crane’s sexual exploits in the tabloids, however, his marriage and career floundered. He followed the few opportunities he had left to Scottsdale, where he would be found murdered while starring in a self-produced play.

On June 29, 1978, Victoria Ann Berry, one of Crane’s co-actors, called 911 after discovering his body. It was the same day that his son was flying into town to visit his father. Police were unable to identify Crane due to the the extent of his injuries and located the apartment leaseholder, Windmill Dinner Theater manager Ed Beck. 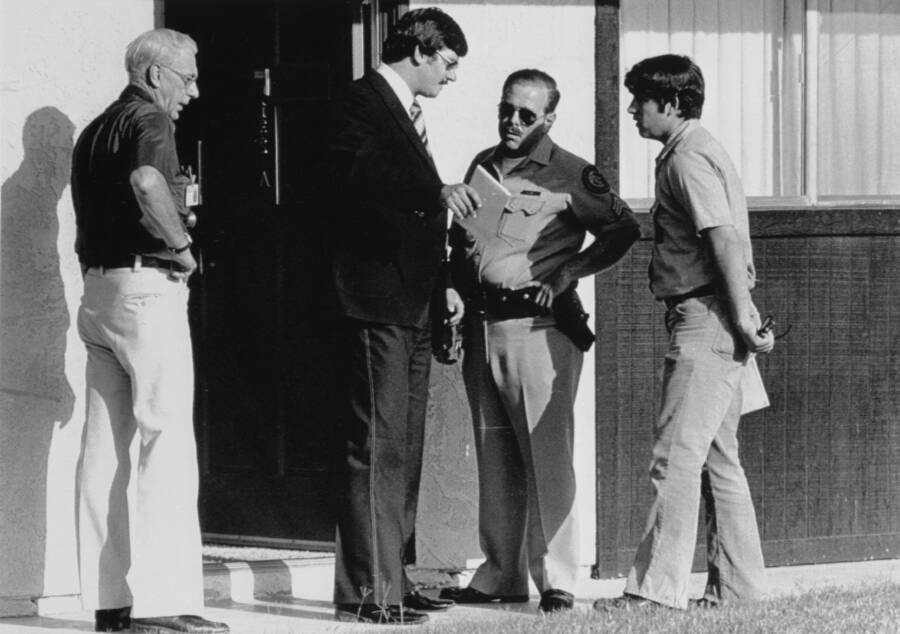 Bettmann/Getty ImagesPolice outside Winfield Apartments unit 132A on June 29, 1978.

“There was no way I could identify him from one side,” said Beck. “The other side, yes.”

Improper procedure tainted the Bob Crane murder scene almost immediately. Berry was allowed to use the phone repeatedly while the Maricopa County Medical Examiner climbed over Crane’s body and shaved his head to examine the wounds. Even Crane’s son Robert was allowed inside the first-floor apartment.

“He was two weeks shy of 50,” recalled Robert. “He says, ‘I am making changes. I’m divorcing Patti.’ He wanted to lose people like John Carpenter, who had become a pain in the butt. He wanted a clean slate.”

John Carpenter was a regional Sony sales manager who had helped Crane with the photo and video equipment to document his sex life. And when the women who fell by Crane’s wayside no longer landed on Carpenter’s lap after Crane’s work dried up, he was purportedly furious. Robert believes that it was Carpenter who killed his father.

“They had a breakup, of sorts,” said Robert of an angry altercation between the two men on the night Crane died. “Carpenter lost it. He was being rejected, he was being spurned like a lover. There are eyewitnesses that night at a club in Scottsdale that said they had an argument, John and my dad.”

Who Killed The Hogan’s Heroes Star?

A lack of forced entry suggested to police that Bob Crane knew his killer. Police had found blood on the door of John Carpenter’s rental car that matched Crane’s blood type. And reports of Carpenter arguing with Crane the night prior made him a prime suspect. With no murder weapon or DNA testing, however, he wasn’t charged. 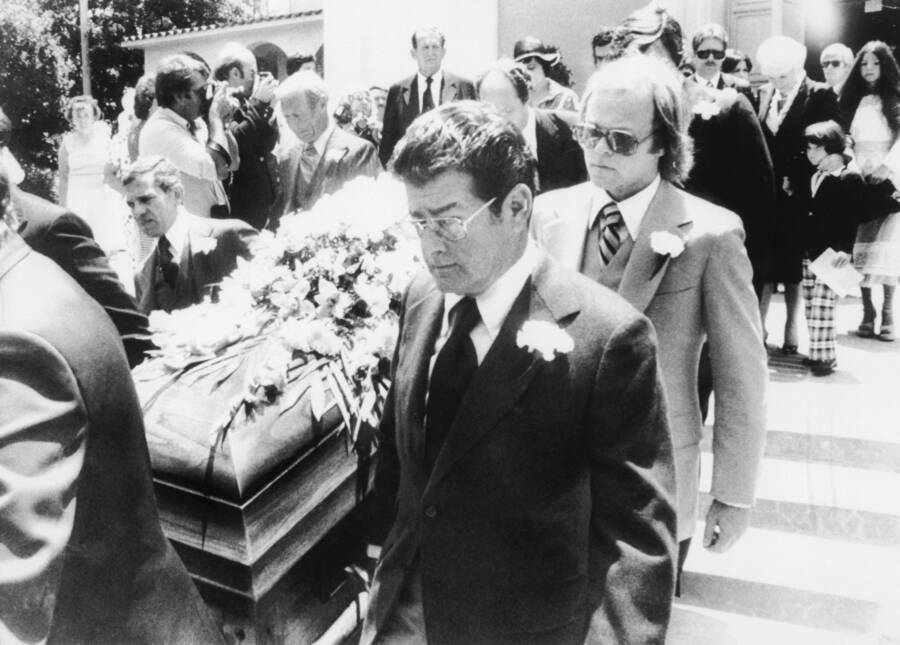 Then, in 1990, Scottsdale Detective Jim Raines found a previously overlooked photograph that appeared to show brain tissue in Carpenter’s car. The tissue itself was long gone, but a judge ruled the photo admissible. Carpenter was arrested and charged in 1992, but renewed DNA testing of old blood samples proved inconclusive.

Furthermore, Carpenter’s defense at trial argued that any of the dozens of angry boyfriends or husbands Crane had enraged with his conquests could have killed him. They also brought witnesses who claimed the two men had dined cordially the night before Crane’s murder and did not argue. Carpenter was acquitted in 1994 and died in 1998.

In 2016, Phoenix TV reporter John Hook wanted to reopen the case and use modern DNA technology to analyze the samples taken from the crime scene. “If we can retest the stuff, maybe we can prove that the blood that was found in Carpenter’s car was Bob Crane’s,” he said. 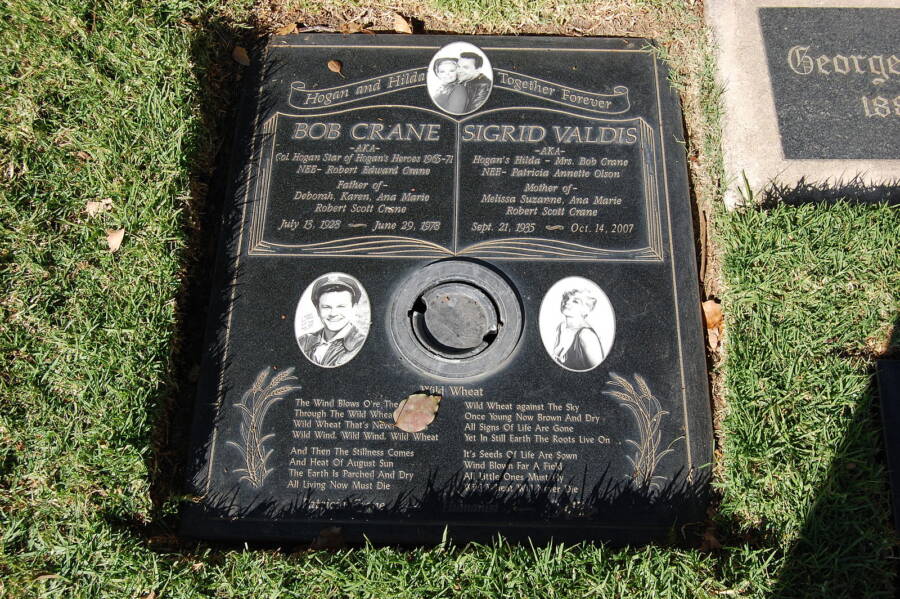 Although Hook convinced the Maricopa County District Attorney to do so, the results proved inconclusive and destroyed the last remaining DNA from Bob Crane’s death.

For Bob Crane’s son Robert, the mystery of who murdered his father has become a lifelong splinter in his mind. And sometimes, he still thinks about who had the most to gain from his father’s death — Patricia Olson.

“She was in the middle of a divorce with my dad,” he said. “If there’s no divorce, she keeps what she gets, and if there’s no husband, she gets the whole thing.”

To his point, Olson had Crane dug up and moved to another cemetery without telling his family — and set up a memorial website from which she sold the Bob Crane’s amateur tapes and nude photographs. But Olson died of lung cancer in 2007, and Scottsdale police have said she was never seriously considered as a suspect.

“There’s still fog,” said Robert. “And when I say ‘fog,’ it’s that word closure, which I hate. But there is no closure. You live with death for the rest of your life.”

After learning about Bob Crane’s death, read about why singer Claudine Longet murdered her Olympian boyfriend. Then, learn about the chilling mystery of Natalie Wood’s death.