"Some day they’ll go down together, they’ll bury them side by side. To few it’ll be grief, to the law a relief, but it’s death for Bonnie and Clyde." 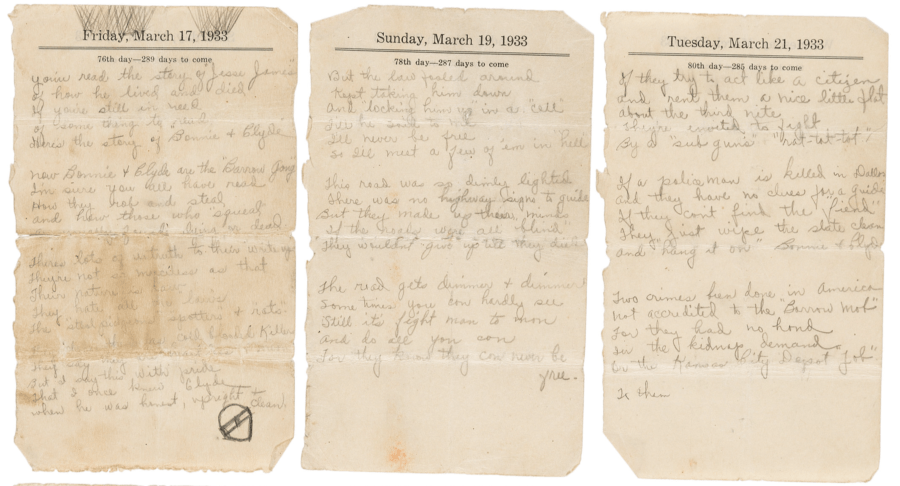 Heritage AuctionsSeveral of Bonnie and Clyde’s poems from 1933.

Bonnie and Clyde are an undeniable part of 20th-century American outlaw iconography. The infamous pair of Depression-era criminals have been immortalized in literature and on the silver screen — and have now entered history’s poetry club.

While scholars have long been privy to Bonnie Parker’s affection for iambic pentameter, a newly discovered notebook once owned by the couple suggests that Clyde Barrow might’ve been a poet as well.

The historical document is set to be auctioned off alongside a batch of photographs in April, Smithsonian wrote, and seems to include a poem penned by Barrow himself. 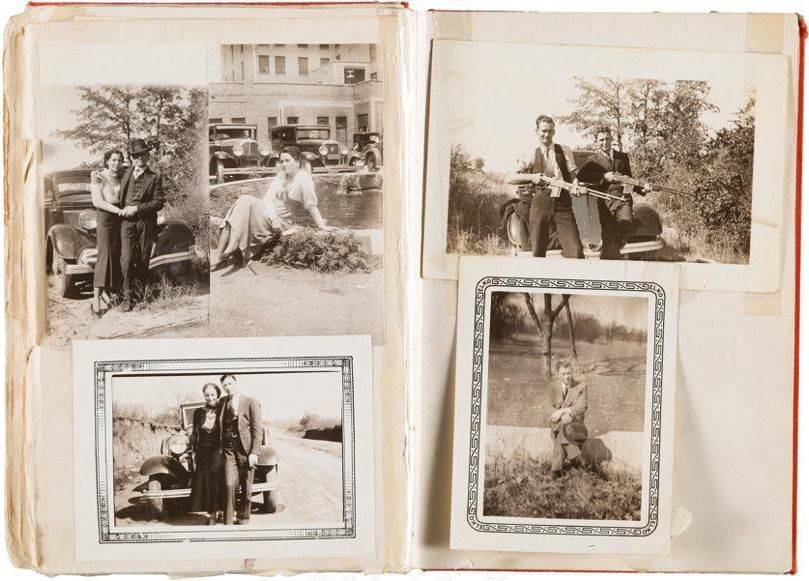 Heritage AuctionsPhotos of the infamous outlaws to be included in the auction in May.

The 1933 notebook was apparently used as a day planner by an unidentified citizen struggling through the Great Depression. It’s unclear how it found its way to Bonnie and Clyde, but it certainly contains the pair’s grammatically-compromised yet often poignant poetry.

Heritage Auctions theorized that the notebook was “apparently discarded” by its owner, whose penciled-in notes suggest he was a passionate golf player (one who might’ve even gone professional during those years).

Perhaps the biggest revelation of this notebook’s discovery, besides the fact that Barrow dabbled in poetry, was that Parker’s most famous poetic work — a 16-stanza piece titled “The Trail’s End,” or “The Story of Bonnie and Clyde” — was originally written in this day planner.

Her poem had been found long ago, as a ripped-out page kept in an envelope labeled “Bonnie & Clyde. Written by Bonnie.” In turn, the discovery of Barrow’s poem within the notebook’s pages reveal it to be a direct response to his lover’s piece:

“Bonnie s just Written a poem / the Story of Bonnie & Clyde. So / I will try my hand at Poetry / With her riding by my side.” 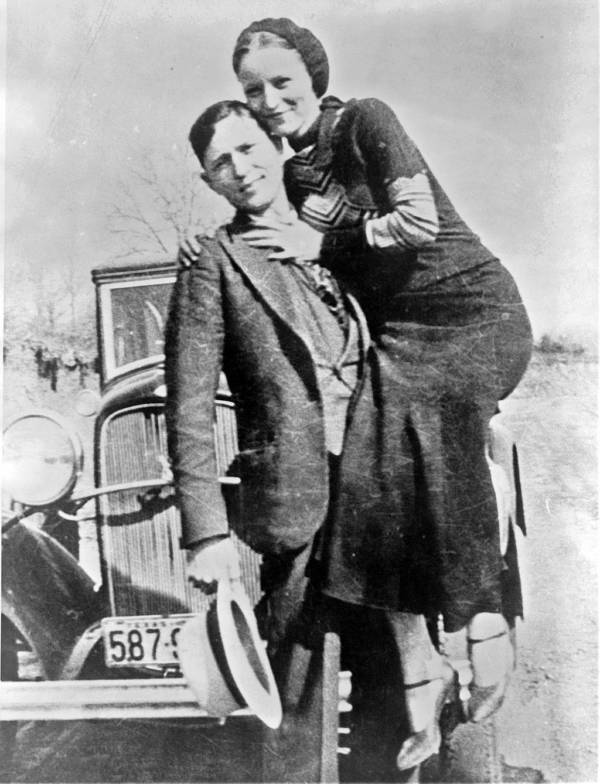 Barrow’s 13-stanza poem reveals far more than the man’s lack of a proper education in terms of his use of jargon and flood of grammatically incorrect sentence construction — it also showcases the mindset he operated under as an outlaw and the rationalization he imposed on himself as a victim of the law.

“If they try to act like citizens / and rent them a nice little flat. / About the third night; / they’re invited to fight, / by a sub-gun’s rat-tat-tat.”

While poetry often asks the observer to read between the lines, Barrow’s writing here is fairly direct — and seemingly honest about his point of view and version of events. The couplets below betray the man’s self-awareness that he is indeed being hunted by police and might die any day.

“We are going home tomorrow / to look in on the folks. We will / meet then out near Grape Vine / if the Laws donte get there / first. But please God Just one / moore visit before we are / Put on the spot.”

In comparison, the level of craftsmanship in understanding flow and pentameter is undeniably stronger in Parker’s writing. Her conclusion of “The Trail’s End,” for instance, vividly paints the couple’s narrative without sacrificing grammar, fluidity, or storytelling.

“Some day they’ll go down together / they’ll bury them side by side. / To few it’ll be grief, / to the law a relief / but it’s death for Bonnie and Clyde.” 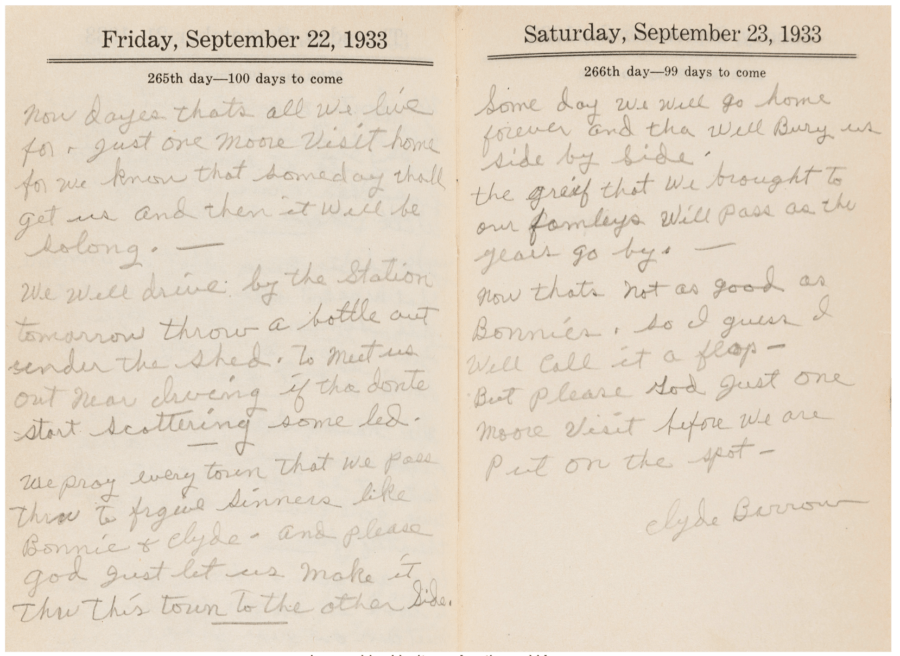 Heritage Auctions“They’ll bury us side by side,” wrote Parker. However, her grieving mother never allowed that to happen.

How the story of Bonnie and Clyde concluded is fairly well known, having been recounted for decades and portrayed on film, in song, and even comic books. The pair was famously ambushed by police, who, as The New York Times put it, “riddled them and their car with a deadly hail of bullets” on May 23, 1934 in Louisiana.

Unfortunately for Parker, her mourning mother prohibited her daughter from being buried alongside Barrow — the ending Parker prophesied and seemingly hoped for, according to her poetry.

For auctioneer Don Ackerman, the couple’s notebook is inherently transportative both to an era long gone and into the minds of two human beings who were largely mythologized and relegated to being legends for the last 86 years.

“The poems are a window on the mindset of criminals hunted down, not knowing which day would be their last,” he said. “They knew they were doomed.”

Next, read up on Bonnie and Clyde’s gory deaths. Then, learn about some of the most fearsome female gangsters of all time.