The Grisly Story Of Samuel Little, The Most Prolific Serial Killer In American History

Serial killer Samuel Little claims to have murdered 93 people starting in the early 1970s — and he's got some disturbing confessions and drawings of his victims to prove it. 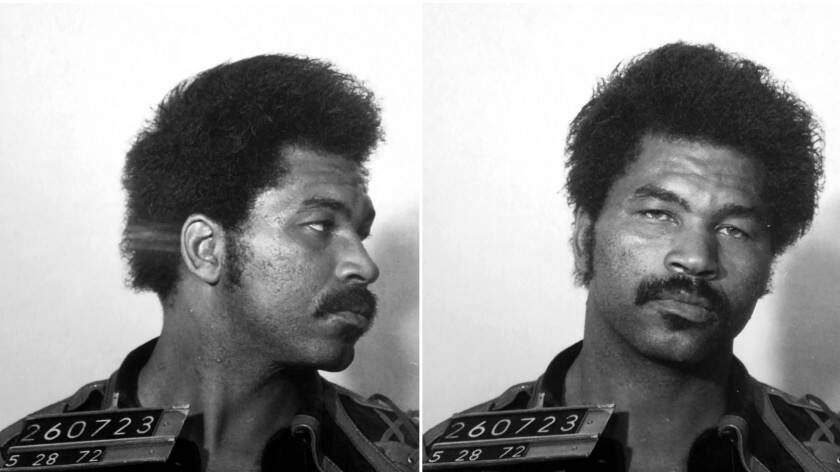 Samuel Little is the most prolific American serial killer of all time — despite the fact that few people even know his macabre story, let alone his name. The 79-year-old convict already serving three life sentences has recently confessed to killing 93 people across more than a dozen states between 1970 and 2005.

While dozens of unsolved “Jane Does” remain, these drawings have thus far helped to reopen and eventually close dozens of cold cases. By the time it’s all over, Samuel Little’s body count may reach untold heights.

Unearthing A Record-Setting Slew Of Murders

Samuel Little, currently serving life in prison for three homicide charges, was hoping to move prisons when he was approached by the FBI’s Violent Criminal Apprehension Program (ViCAP) last spring. Little appeared to have information regarding a killing in Odessa, Texas that caught the attention of Texas Ranger James Holland and two FBI crime analysts. They then approached Little with an offer: Give us some information and we’ll switch you into a new prison. Little turned out to be more than willing to talk.

“Over the course of that interview in May, he went through each city and state and gave Ranger Holland the number of people he killed in each place,” said ViCAP crime analyst Christina Palazzolo. “Jackson, Mississippi — one; Cincinnati, Ohio — one; Phoenix, Arizona — three; Las Vegas, Nevada — one.” 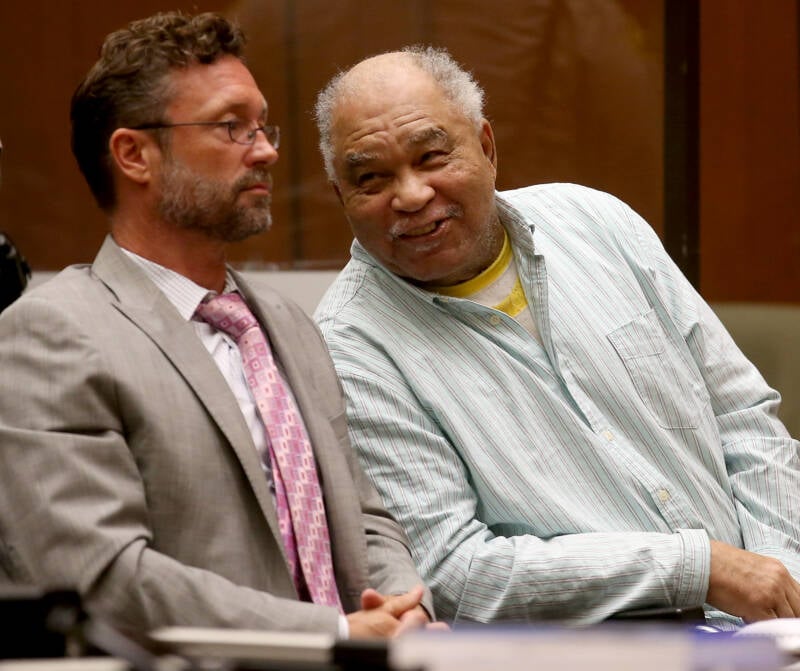 Ector County District Attorney Bobby Bland said that Little assisted authorities diligently for months and ultimately admitted to having killed around 90 people in territory ranging from California beaches to the deserts of New Mexico and the midwest down to Florida’s southern tip and back up to Washington D.C. — all between 1970 and 2005.

While 50 of these confessions could be corroborated thus far and, at last, provide the families of those victims with some closure, many of Little’s confessions are still pending verification. But even if no other confessions are able to be confirmed, Little is still now the deadliest known killer in U.S. history.

And with Little’s cooperation, there may only be more confirmations of his murders on the horizon. “There’s been a lot of cooperation for law enforcement across the country as Texas Rangers are in the process of verifying the murders,” said Bland.

Little remembered everything about his crimes, according to Palazzolo, including the car he was driving, where he was, and whom he picked up. Little’s memory is apparently so reliable, in fact, that the drawings he made of his victims are actually practical pieces of evidence for the investigators attempting to close decades-old unsolved murders. He may not recall the exact dates of certain incidents — but he can still recollect the faces of the women he killed who can then be identified by their friends or families: 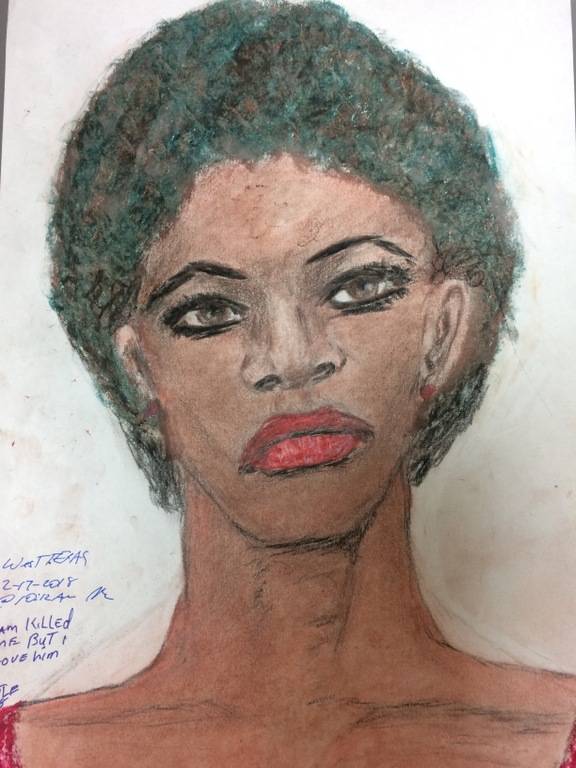 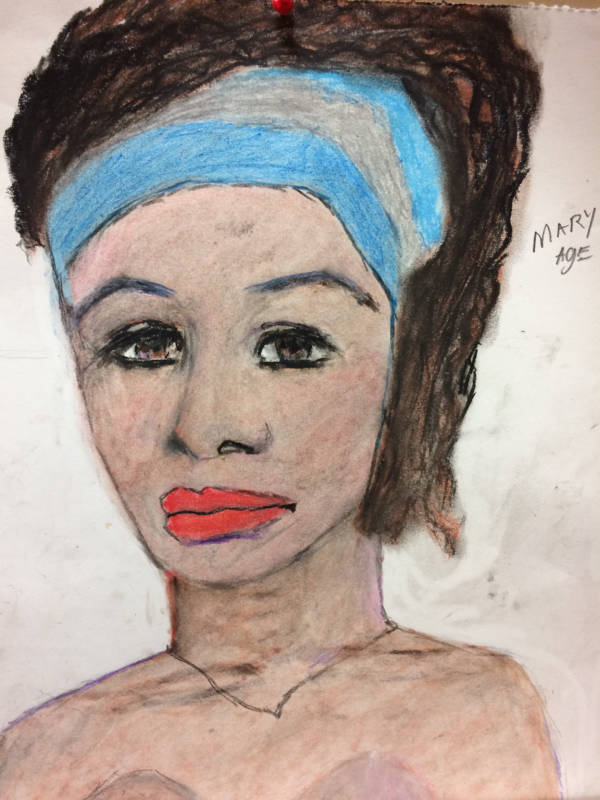 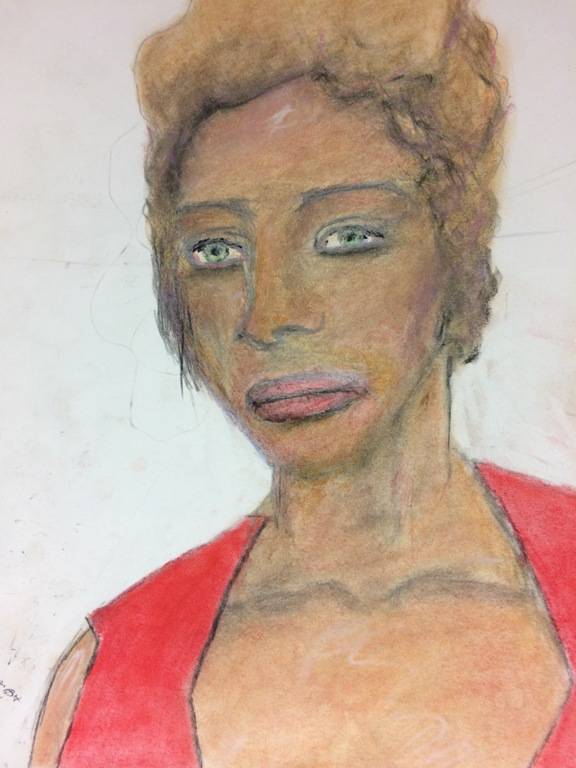 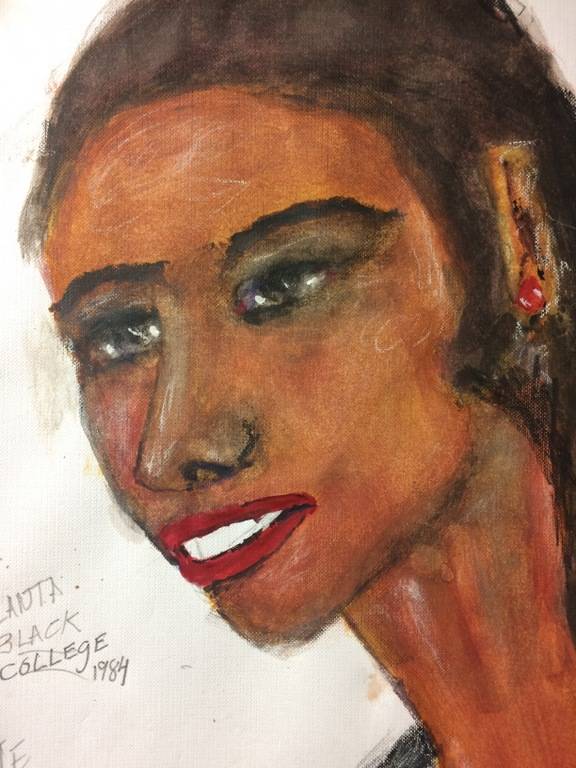 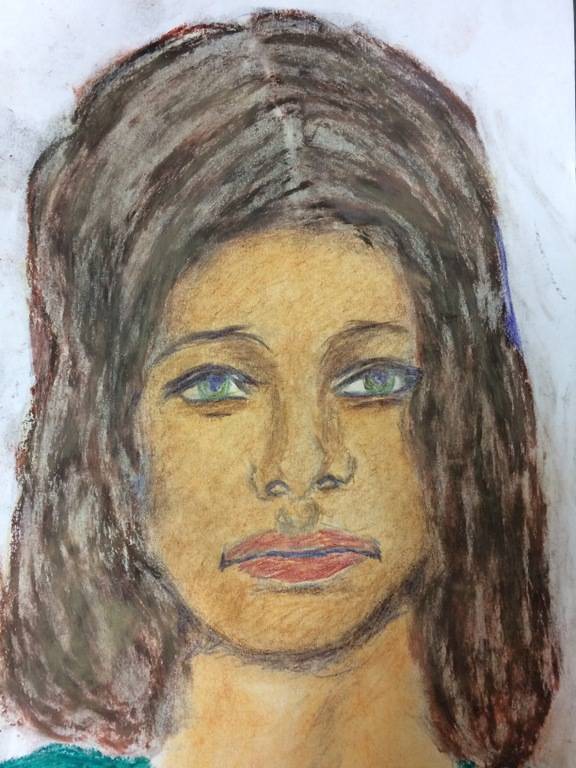 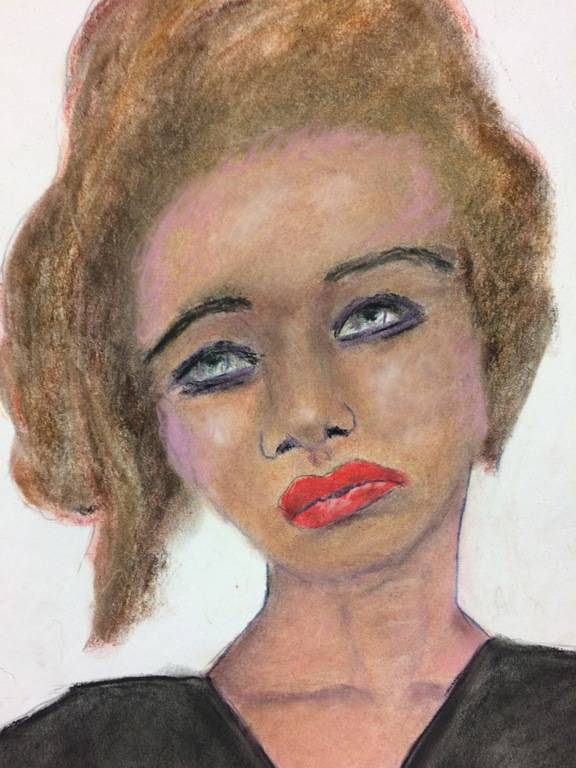 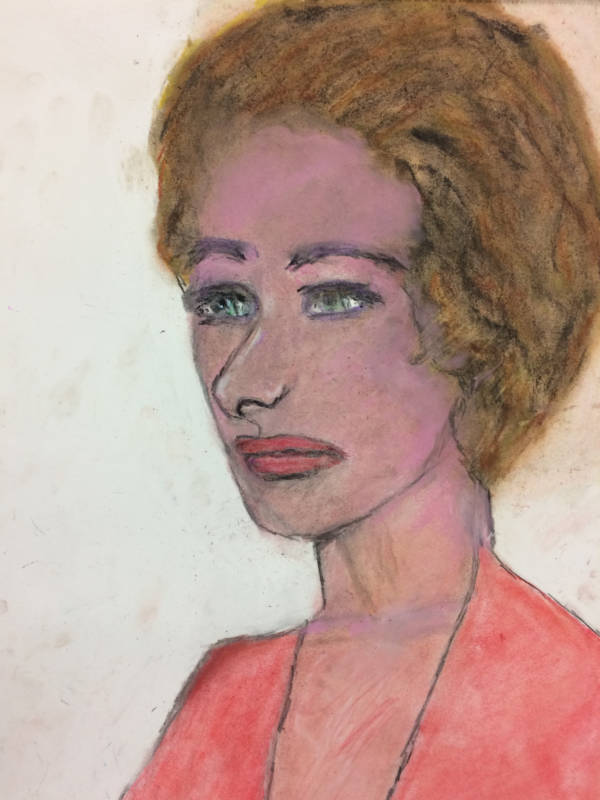 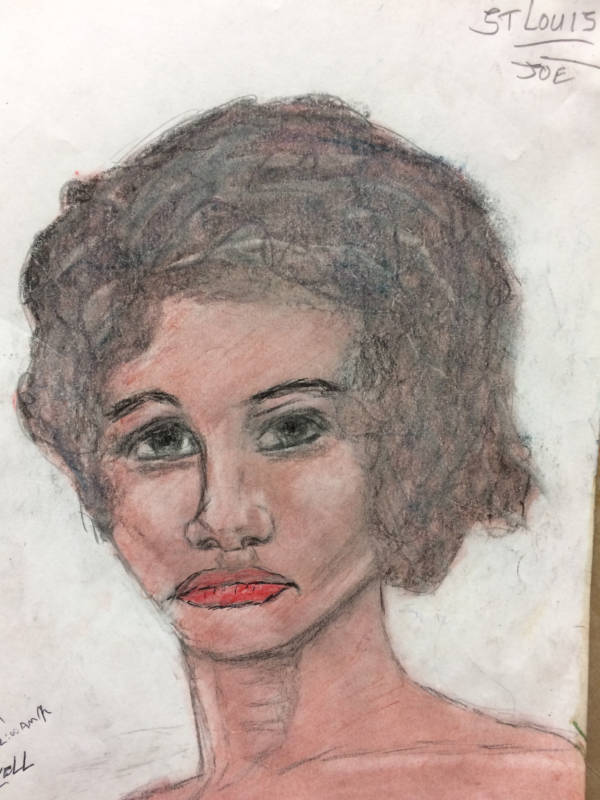 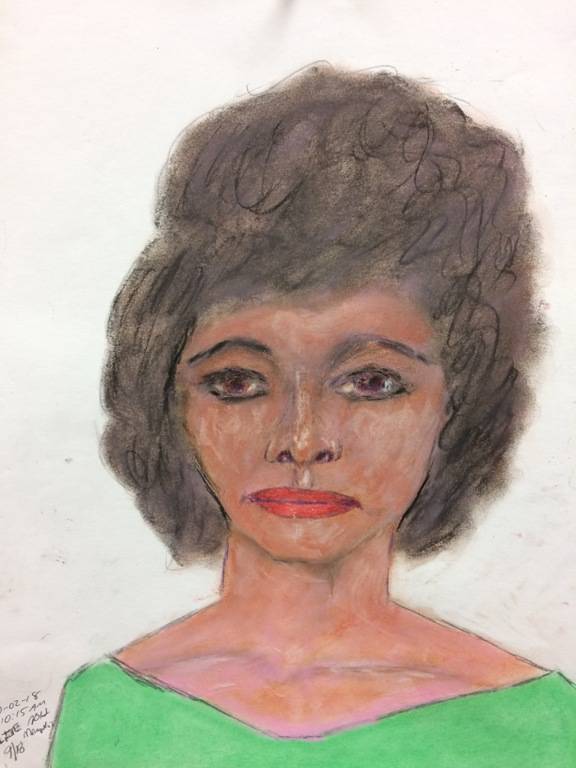 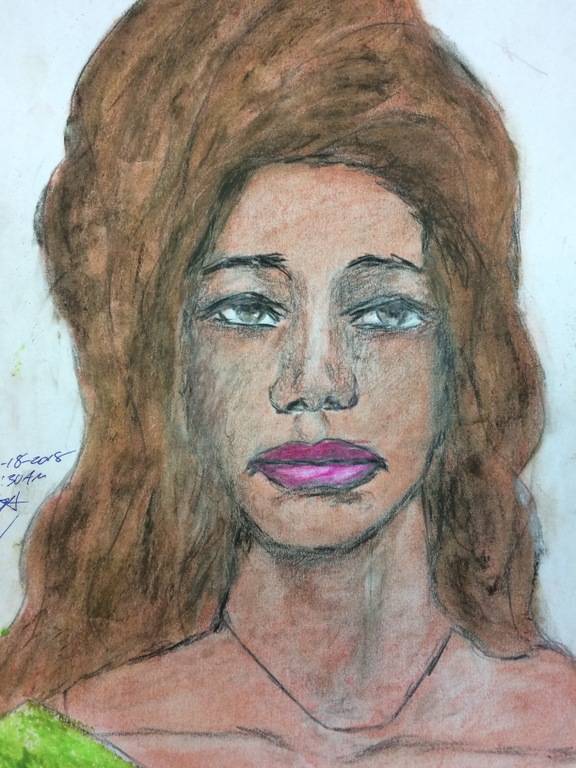 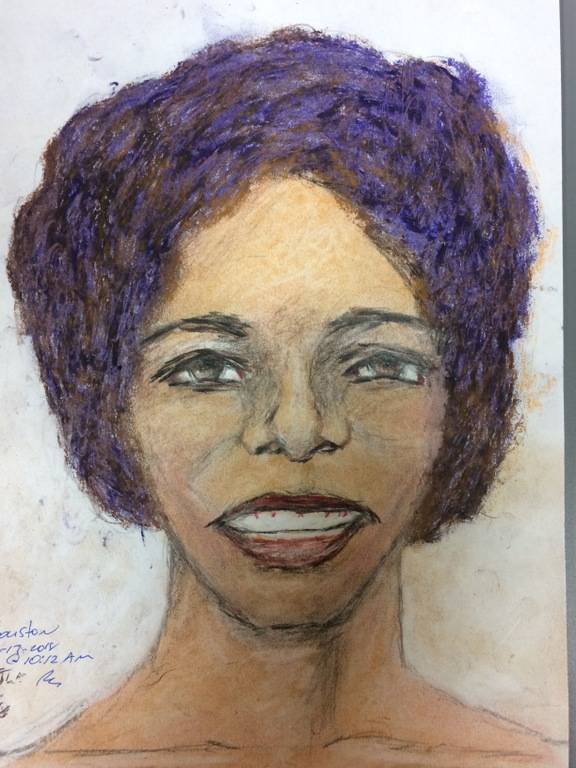 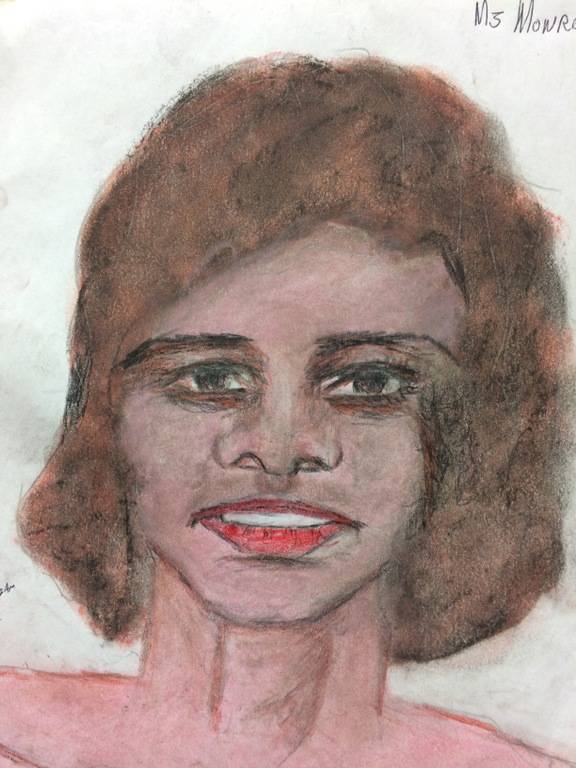 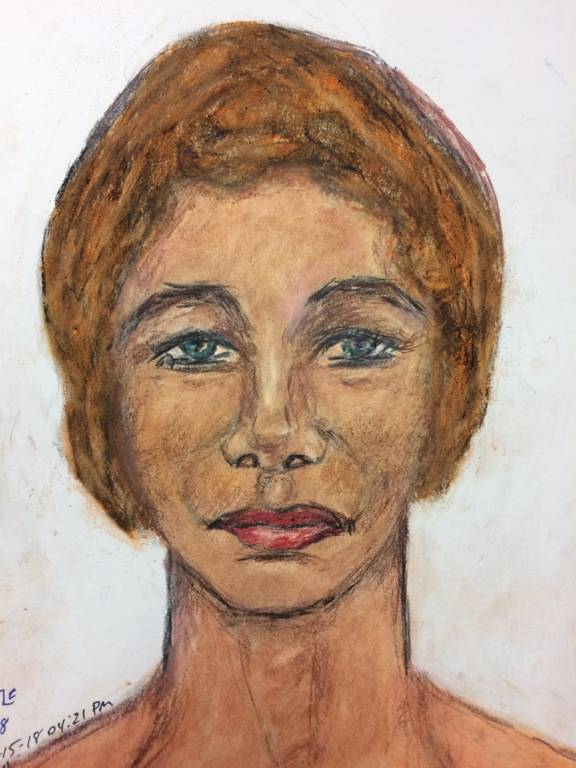 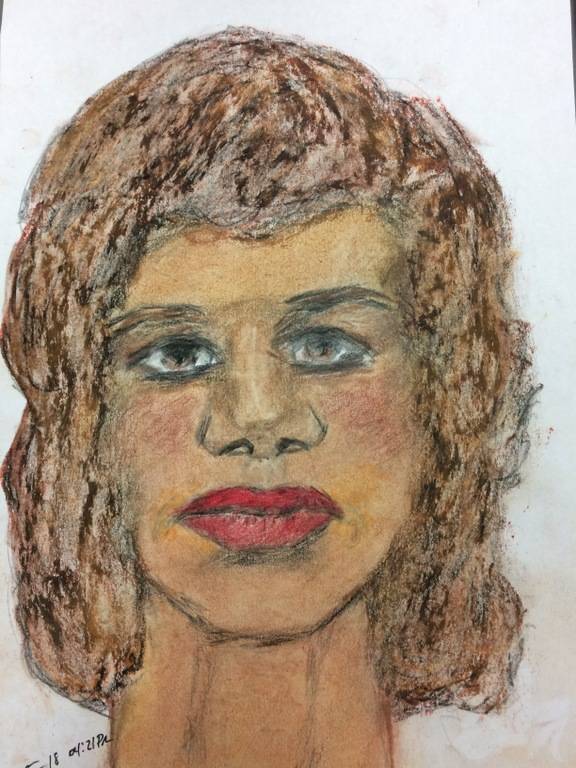 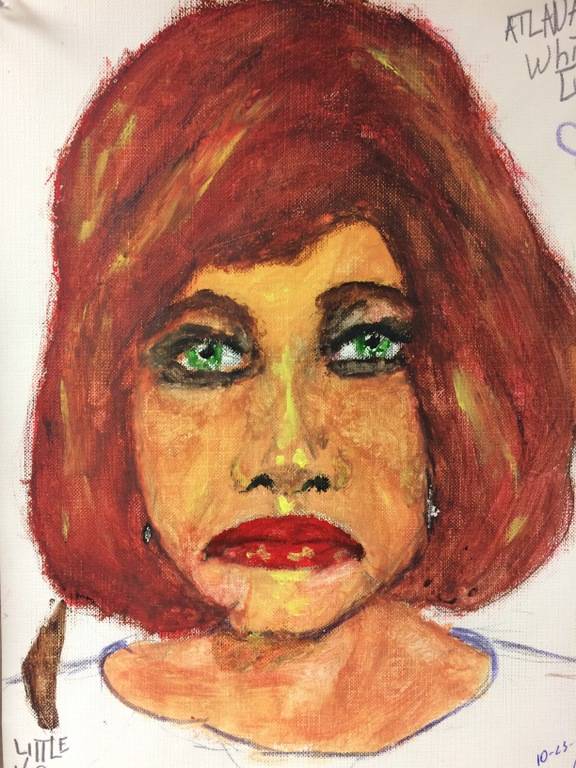 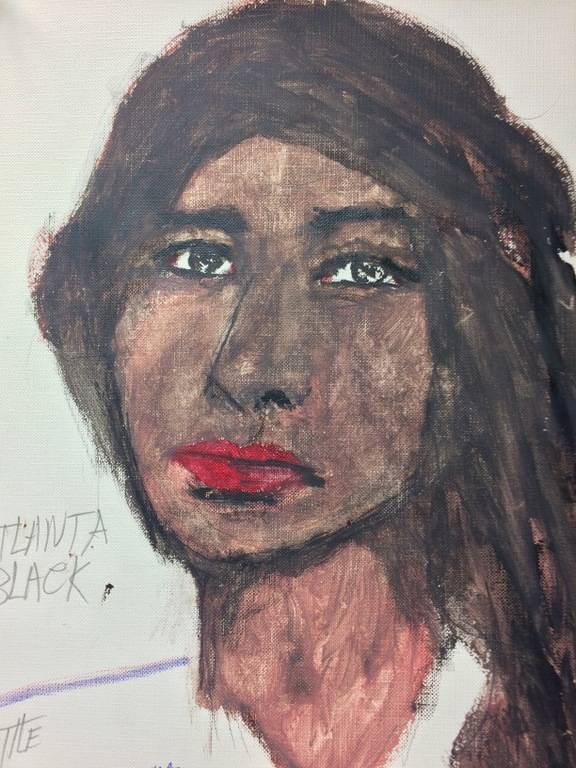 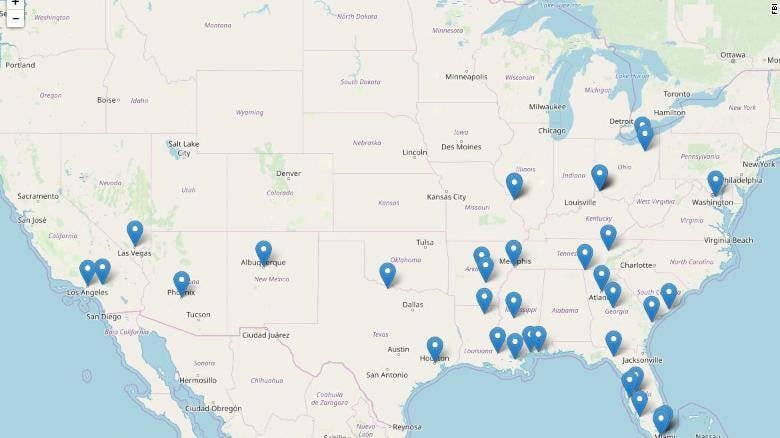 The Grisly Story Of Samuel Little, The Most Prolific Serial Killer In American History
View Gallery

Because the majority of his crimes remained unsolved or unknown at the time of his arrest, Little is currently only serving three consecutive life sentences — a pittance compared to the staggering term he'd face if his total crimes were successfully presented in court.

But now, the details of Samuel Little's murders are coming to light like never before.

The Murders Of Samuel Little

Born in Georgia in 1940, Samuel Little soon moved with his family to Ohio, where he grew up relatively poor and got into trouble in school. Soon enough, he graduated to petty crime and was eventually arrested for breaking and entering in Nebraska in 1956.

His crimes, however, only grew more serious from there as he traveled across nearly a dozen U.S. states and racked up arrests for crimes ranging from shoplifting and fraud to assault and rape. Soon, murder would join that list.

He later claimed to have been active as a killer going back to the dawn of the 1970s, but his first arrest for murder came in 1982 in Mississippi. However, there wasn't enough evidence to indict. Meanwhile, he was arrested for another killing in Florida but was acquitted not long after.

He then moved to California and the prime years of his killing began.

Little's victims were largely women who occupied vulnerable positions in society, either prostitutes or drug addicts too incapacitated to realize how dire their straits had become or whose addictions could easily be seen as their cause of death. Little, who was once a competitive boxer, would typically dump the bodies of his victims wherever he could — alleys, dumpsters, or a garage — after first knocking them out, beating, and strangling them. 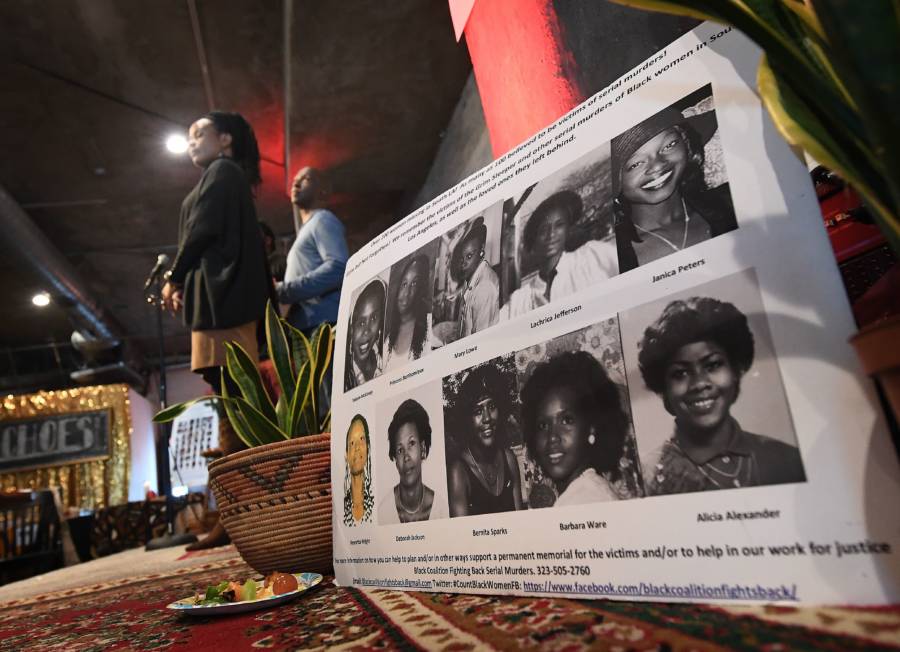 MARK RALSTON/AFP/Getty ImagesOrganizers read out the names of serial killers' victims, including those of Samuel Little, at a memorial service in Los Angeles on Dec. 8, 2018.

Perhaps most shocking — besides the sheer size of Little's streak of victims — was how long it took for him to be apprehended. Richard Nixon had just finished his first year in office when Little began beating and strangling women to death, while Barack Obama was entering his second term when he was finally caught.

He was often suspected, but authorities could never pin the crimes on him. With "no stab marks or bullet wounds, many of these deaths were not classified as homicides but attributed to drug overdoses, accidents, or natural causes," the FBI said in its initial report in November 2018. 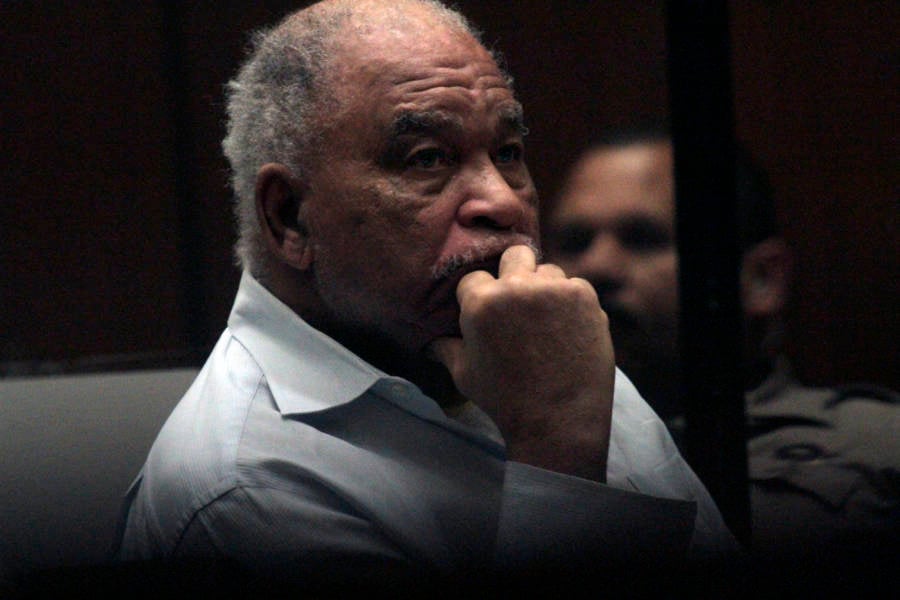 It was not until September 2012 when Little's streak finally came to an end. A narcotics-related warrant for Little's arrest caught the attention of an officer which led him to Little in a homeless shelter in Kentucky. After his subsequent extradition to Los Angeles, DNA samples were taken — and finally matched to victims in three unsolved murders from 1987 to 1989.

He pleaded not guilty to all three homicide charges despite witness testimonies from various women who narrowly escaped his clutches. He was consequently convicted in 2014 and received three consecutive life sentences.

Fortunately, the LAPD decided to share Little's DNA samples with the FBI who let the ViCAP program run a trace on them. Little's DNA was matched to the killing of Denise Christie Brothers in Odessa, Texas, who was found dead from strangulation in an empty parking lot in January 1994 a few blocks from a motel. This match led to the cooperative efforts between the FBI and Texas Rangers.

Bland said Samuel Little provided them with such detailed, minute statements that only Brothers' real killer would've known and was subsequently indicted by a grand jury on July 16, 2018. He was then sent to Texas to face the newfound charges for which he pleaded guilty this time and received a further life sentence.

FBIAn FBI map marking each location where Samuel Little killed one of his victims, according to his confessions.

In December 2018, the FBI's ViCAP program and Carolyn Nunn of the KSP Central Forensic Laboratory found a match between Little and the murder of 23-year-old Linda Sue Boards who was found in a field on May 15, 1981, and last seen alive four days earlier on her way to a nightclub in Bowling Green. A Warren County grand jury in Kentucky was subsequently able to indict Little of this crime too, Bowling Green Daily News reported.

"We've had a lot of luck through the years on some cold cases and any time you can hopefully give some measure of closure to a victim's family, especially in a violent crime, it means a lot to everybody involved in law enforcement," said Warren County Commonwealth's Attorney Chris Cohron.

Samuel Little was also connected to the death of a Knoxville woman, named Martha Cunningham, previously thought to have died of natural causes, Knox News reported. 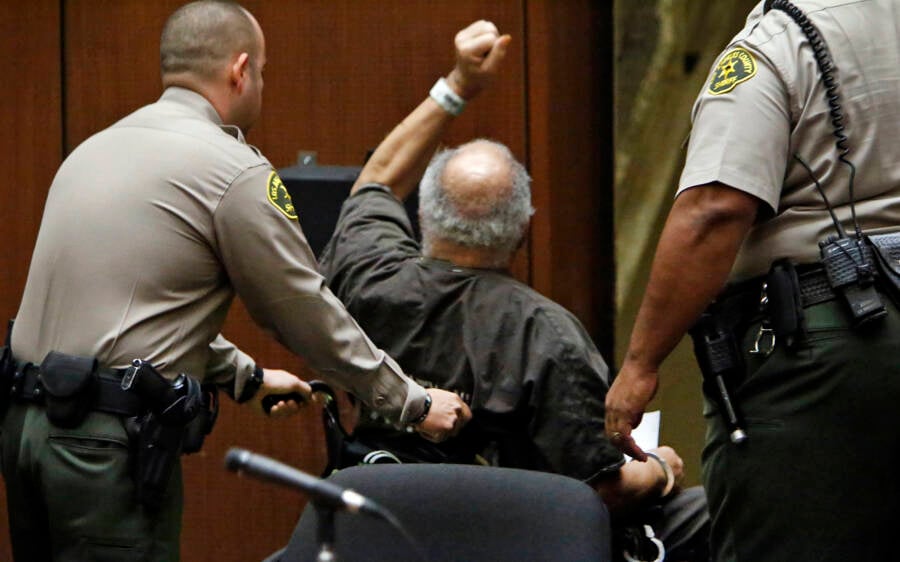 Al Seib/Los Angeles Times via Getty ImagesA defiant Samuel Little raises his arm in the air as he is led out of the courtroom while victims and family of victims applaud at the conclusion of his hearing on Sept. 25, 2015 after he was sentenced to life in prison without the possibility of parole for the killings of three women in the Los Angeles area in the 1980s.

"I never believed my sister died of natural causes — none of us did," said Jessie Lane Downs. "But now we know, thank the Lord." Cunningham's death was a mystery to her family for nearly 44 years since she was found by two hunters on Jan. 18, 1975 — bruised and dumped in the woods.

Fortunately, the FBI's collaboration with law enforcement all over the country continues to close cases such as these, and provide the families of Little's victims with some semblance of peace.

The Most Prolific Serial Killer In U.S. History

An FBI video featuring one of the confessions of Samuel Little, this once involving a victim named Marianne in Florida in 1972.

With Samuel Little's confessions continually pouring in, his official body count began to rise. Eventually, in October 2019, the FBI confirmed that he is the deadliest known killer in U.S. history.

With 50 victims to his name and some 40 other cases still pending, Little's body count has surpassed that of far more famous killers whose names have been etched into the American consciousness. And those 40 cases may eventually see closure themselves.

"For many years, Samuel Little believed he would not be caught because he thought no one was accounting for his victims," said ViCAP Crime Analyst Christie Palazzolo. "Even though he is already in prison, the FBI believes it is important to seek justice for each victim—to close every case possible."

Another one of Samuel Little's confessions as released by the FBI.

Meanwhile, the FBI has released video of many of Little's disturbing confessions as well as the drawings of his victims in hope that those with any knowledge of these women might come forward. With any luck, the FBI hopes, Samuel Little will help give closure to the families he himself devastated with his vicious crimes decades ago.

After reading about the murders of Samuel Little, read about Robert Hansen, the serial killer who hunted his victims like animals. Then learn about the disturbing crimes of serial killer Sean Vincent Gillis and "Night Stalker" Richard Ramirez.