Robert Hansen: The Alaskan Serial Killer Who Hunted His Victims Like Animals

Authorities found a map in Robert Hansen's Anchorage home marked with tiny "X" symbols, showing where the so-called "Butcher Baker" killed and buried his victims in the wilderness.

In the 1924 short story “The Most Dangerous Game,” author Richard Connell recounts the tale of a wealthy Russian aristocrat who, bored with trapping animals, lures a big-game hunter to his island and hunts him for sport.

Ever since the story was published, the perverse idea of humans hunting humans has captivated people. The concept has appeared time and again in the plots of novels, TV shows, and movies, but for the most part, it has been relegated to the pages of fiction. 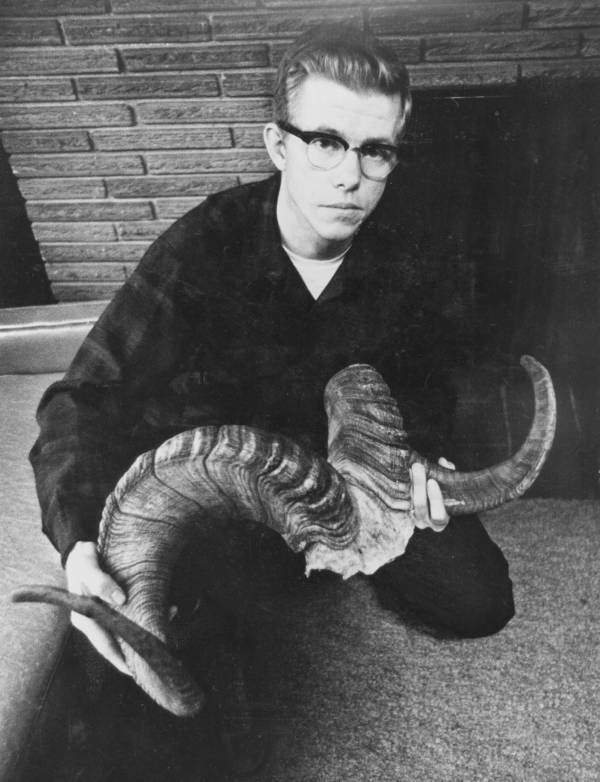 Anchorage Daily News/Tribune News Service via Getty ImagesRobert Hansen was an avid hunter who decorated his home with hunting trophies, but he didn’t just hunt game.

However, in the 1970s, Robert Hansen, known as the “Butcher Baker,”, turned this premise into a horrifying, decade-long reality. Though Hansen maintained a wholesome reputation in town, he let his hidden dark side run wild in the woods of Alaska.

Throughout the ’70s and early ’80s, Hansen targeted sex workers and exotic dancers, abducting these women to turn them loose in the woods so he could hunt them like animals. This is the terrifying true story of the Butcher Baker serial killer.

Who Was Robert Hansen, The “Butcher Baker” Of Alaska? 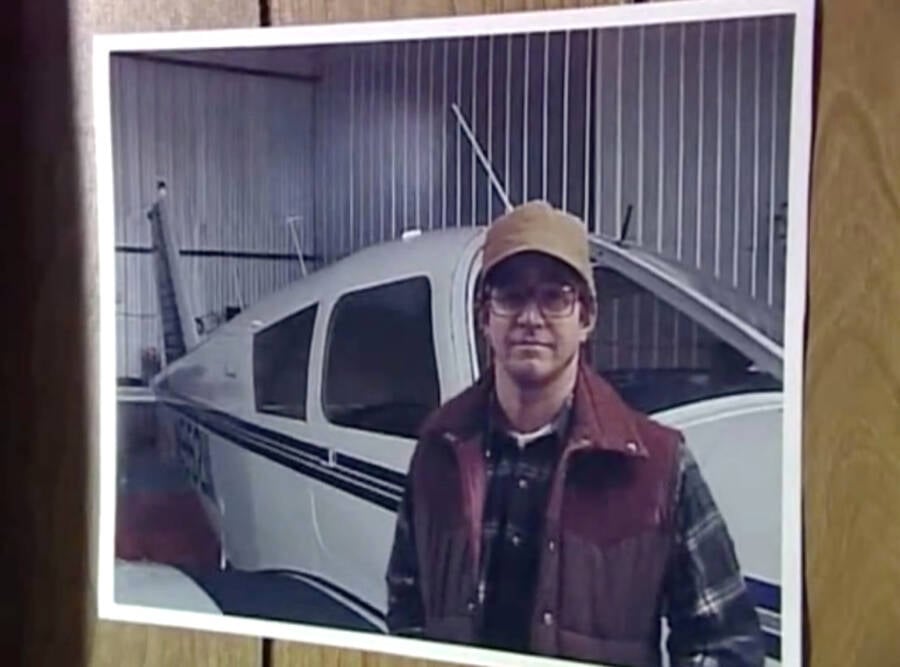 YouTubeRobert Hansen with his bush plane in Anchorage, Alaska.

Unlike his fictional counterpart, Robert Hansen was no aristocratic nobleman. Born Robert Christian Hansen on February 15, 1939, in Estherville, Iowa, his father was a Danish immigrant who owned a bakery. He was also a strict disciplinarian.

Hansen’s childhood was not an easy one. He worked long hours in the family bakery from a young age. Though he was naturally left-handed, he was forced to use his right hand instead, a switch that resulted in a lifelong stutter.

As a teenager he was painfully shy, had bad acne, and was mocked for his stutter. The boys at school made fun of him, and the girls he liked rejected him. He was often described as a loner.

As a social outcast, he took refuge in time spent alone. Over time, he became an avid game hunter, channeling his rage and fantasies of vengeance into the sport of stalking animals.

An Insatiable Thirst For Revenge 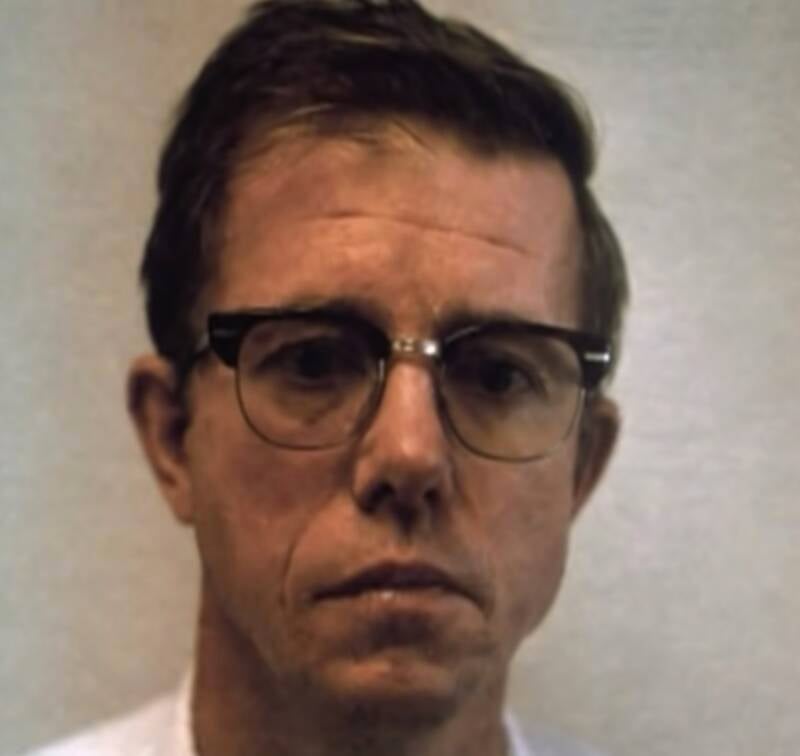 In 1957, when he was 18 years old, Robert Hansen joined the United States Army Reserve, hoping to leave behind his troubled youth and make something of himself.

For a while, he did. After serving a year in the reserves, he became an assistant drill instructor in Pocahontas, Iowa, and even married a young woman he met there.

But Hansen still felt mistreated by the community and sought retaliation. In 1960, at age 21, he convinced a young bakery employee to help him burn down a school bus garage. When the boy later confessed, Hansen was arrested. His wife divorced him, leaving him alone and incarcerated.

Though he was released just 20 months into his three-year sentence for arson, he was jailed a few more times afterward for petty theft. Still, he managed to remarry to another local woman.

Finally, Hansen decided he’d had enough of the contiguous United States. In 1967, he moved to Anchorage, Alaska, which was about as far from his life in Iowa as he could get. He moved into a small community, had two children with his wife, and settled into a quiet routine. He was well-liked and opened up a small bakery.

But while the townspeople mostly bought into the facade of the happy baker with a family and a knack for hunting, some cracks showed through Hansen’s squeaky-clean exterior.

In 1972, he was arrested twice: once for the abduction and attempted rape of a housewife, and again for raping a prostitute. Unknown to authorities, his killing spree began in 1973, likely emboldened by his ability to walk free after his early crimes.

The year of 1976 saw Hansen arrested again and sentenced to five years for shoplifting a chainsaw. However, he appealed that sentence and was released — while he continued to prey on strippers and sex workers who he forced to act out his twisted fantasies. 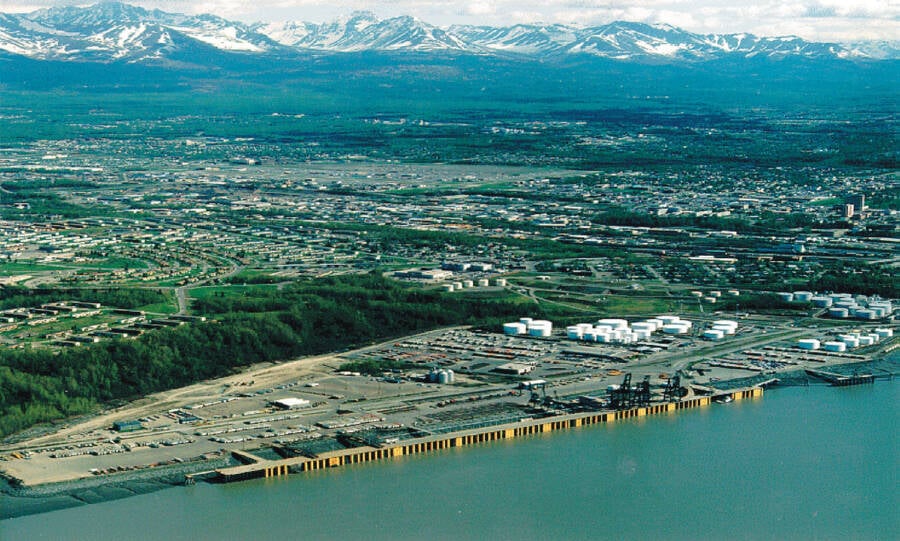 In 1983, more than a decade after Hansen moved to Anchorage, a 17-year-old girl named Cindy Paulson was found running frantically down Sixth Avenue, barefoot and handcuffed.

After being picked up by a driver and returned to safety, Paulson, a prostitute, told her story to police. She described being held hostage by a man who’d handcuffed her to his car, held her at gunpoint, and took her to his house where he chained her by the neck.

The man raped and tortured her repeatedly, before attempting to load her onto a plane and take her to his cabin in the Matanuska-Susitna Valley about 35 miles north of Anchorage. As the man prepared the plane for takeoff, Paulson managed to escape, leaving her shoes behind as evidence.

Robert Hansen fit the description of the kidnapper perfectly. Paulson even described his stutter and identified his plane. But police were still reluctant to bring him in. After all, though he was no stranger to trouble with the law, the local baker was well-liked in the community.

Hansen admitted that he had met the girl but claimed she was setting him up because he had refused to pay her extortionate demands. When he told police about his strong alibi, provided by a friend, he was released.

The FBI Tracks Down The Butcher Baker 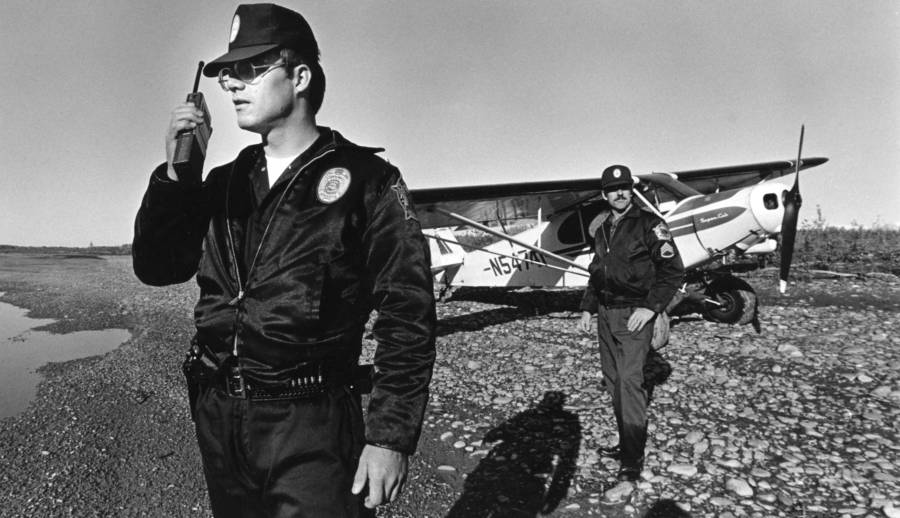 Anchorage Daily News/MCT via Getty ImagesLt. Pat Kasnick of the Alaska State Troopers and Leon Steele of Fish and Wildlife Protection Agency helped to conduct the search of the Knik Flats for bodies of missing prostitutes and topless dancers on September 17, 1983.

Meanwhile, Alaska State Troopers were convinced a serial killer was on the loose. Several sex workers and dancers had gone missing, and troopers were beginning to find bodies.

When two bodies were discovered in the Matanuska-Susitna Valley, along with .223 shell casings nearby, Hansen was a prime suspect. But the police needed proof.

This led to the involvement of the FBI, including now-retired FBI agent John Douglas, who helped pioneer the field of criminal profiling (and whose story is depicted in the Netflix series Mindhunter).

Douglas put together a psychological profile of the killer based on the details of the case and the injuries inflicted on the recovered bodies. He theorized that the killer was an experienced hunter with low self-esteem and a history of being rejected by women — and that he likely had a stutter.

Though he had been cleared several times before, there was no doubt about it: Robert Hansen fit the profile almost exactly. What’s more, he owned a bush plane and a cabin in the Matanuska-Susitna Valley.

The police soon obtained a warrant to search Hansen’s plane, car, and homes. What they found shocked them. The horror that Robert Hansen’s victims had endured was almost too macabre to believe. 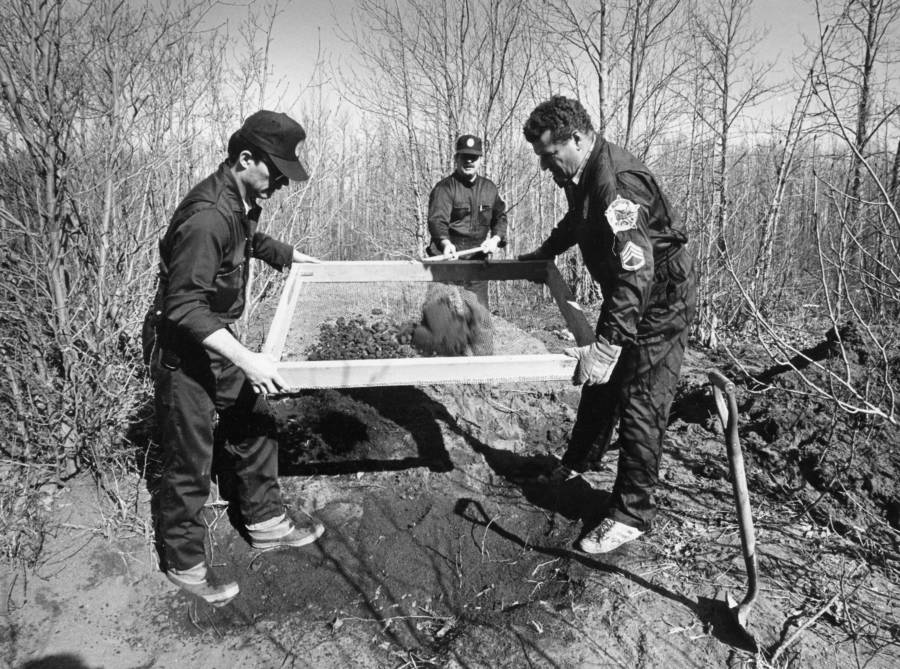 Paul Brown/Anchorage Daily/MCT via Getty ImagesCriminal investigators sift for signs of bodies along the Knik River in Alaska in April 1984.

In Anchorage, Hansen was a respected business owner known for his skill as a bowhunter. The den in his home was decorated with hunting trophies and animals mounted on the walls, and he even set a few bowhunting records.

But what no one knew is that for more than a decade, the hunter had also been collecting “trophies” from another kind of kill.

Hansen mainly targeted sex workers and exotic dancers from around Anchorage. He would kidnap the women and either drive or fly them in his private bush plane out to his cabin in the remote Alaskan bush.

If the women didn’t put up a fight, he would rape them and bring them back to town, threatening them into secrecy. But those who did not cooperate suffered a truly nightmarish fate.

Out in the wilderness — his favorite location was along Knik River — Robert Hansen would set the women free. For a moment they’d have hope that there was a chance to escape. Then, as they ran for their lives, he would track them down, taking his time, hunting them like wild animals.

Armed with a hunting knife and a .223-caliber Ruger Mini-14 rifle, he’d torture the women with this chase for hours or sometimes days at a time, until he located his prey and shot them like game. 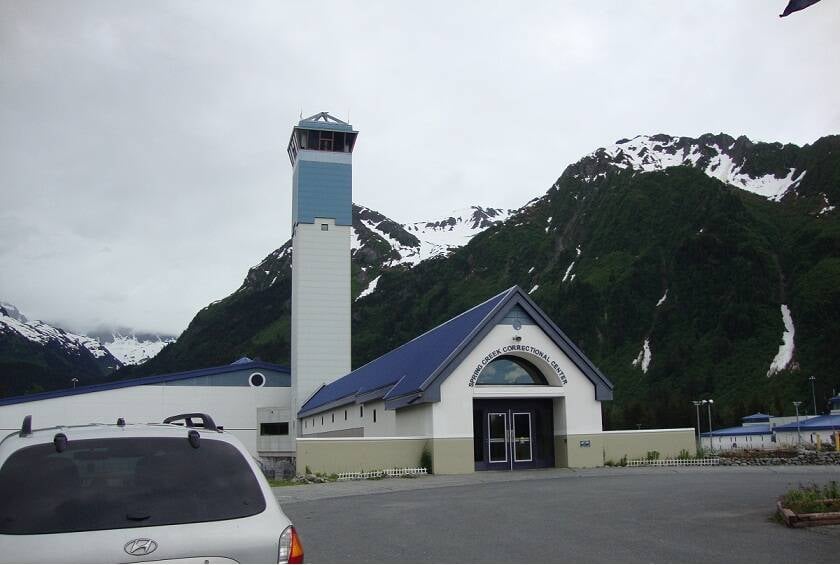 While searching the Butcher Baker’s home, police found an aviation map of the area hidden in the headboard of the bed. It was marked with tiny “X’s” denoting the kill and burial sites of his victims.

Some of the “X” marks matched up with where police had found bodies. There were 24 “X’s” in all.

What’s more, in his psychological profile of the killer, Douglas had predicted that the murderer would keep souvenirs from his prey. Sure enough, in the basement of Hansen’s home, police found a stash of jewelry. In the stash was a necklace that belonged to one of the victims.

Faced with the evidence in 1984, Hansen confessed to murdering 17 women and raping another 30 women over a 12-year period.

Robert Hansen was sentenced to 461 years plus life in prison without parole in 1984. He was imprisoned at Spring Creek Correctional Center in Seward, Alaska, where he died in 2014.

As part of a plea bargain, the Butcher Baker was only ever charged with four of the 17 murders he confessed to — and some believe he actually killed more than 20 women.

In exchange for the reduced conviction, Robert Hansen agreed to assist police in locating the remaining bodies plotted on his kill map. Unfortunately, five of the bodies have still not been found to this day, and Hansen took the secret of their locations to his grave.

After learning about Robert Hansen, the Butcher Baker serial killer, read about Ed Gein, another horrifying murderer who got what was coming to him. Then, check out the big game hunter who was trampled by his prey.