From poisoning to a government ploy, many of the theories about how Brittany Murphy died are as bizarre as they are sinister.

Though the sudden death of Brittany Murphy was initially ruled as a terrible though natural twist of fate, the sheer shock of her demise led many to suspect foul play.

The rising starlet found fame as the innocent ingénue in the 1995 hit film Clueless, and that role catapulted her into other cult classics like Girl, Interrupted, Riding In Cars With Boys, and Uptown Girl. Murphy was a mix of endearing and edgy, and many Hollywood insiders predicted her inevitable superstardom. 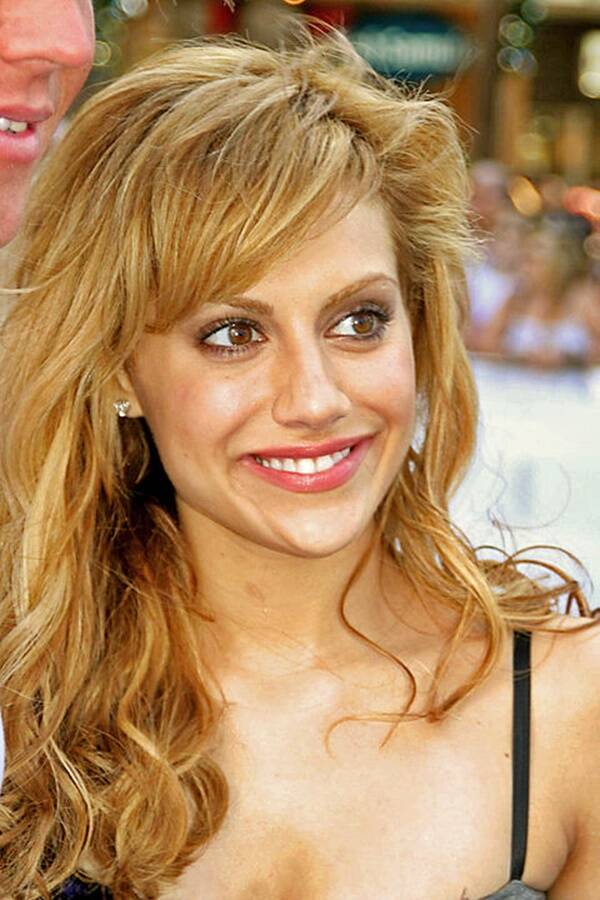 But instead of reaching the A-List, Brittany Murphy was found dead in the bathroom of her Hollywood Hills mansion just before Christmas, 2009. The first autopsy report listed pneumonia, iron-deficiency anemia, and multiple drug intoxication as the cause of her death though no illegal substances were found in her blood.

And then, just five months later, her husband died in the same mansion under eerily similar circumstances. 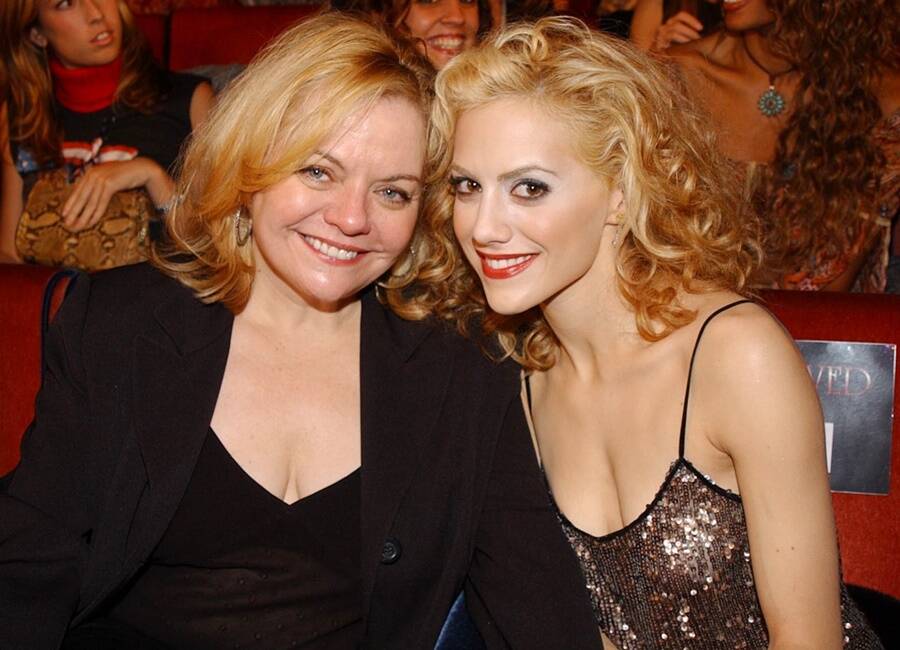 Getty ImagesBrittany Murphy and her mom Sharon (pictured) moved to Hollywood when she was a teenager so that she could pursue a career as an actress.

Brittany Murphy was born Brittany Anne Bertolotti on November 10, 1977, in Atlanta, Georgia. When she was two years old, her parents divorced, and her mother took her to Edison, New Jersey, where she would remain until she was a teenager.

As a child, Murphy was energetic and loved to sing and dance. Her first acting role came at the tender age of nine when she starred in her school production of the musical Really Rosie. When she turned 13, she packed her bags and headed to Hollywood under the guidance of her mother.

“They were adorable together,” said JoAnne Colonna, Murphy’s longtime agent. “They finished each other’s sentences. Both were bright and bubbly, and that relationship never changed.” 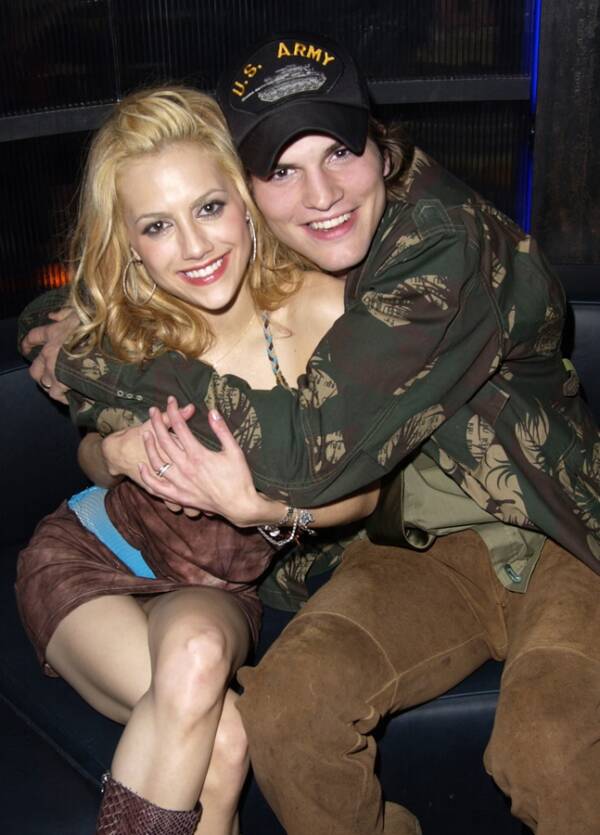 Getty ImagesBrittany Murphy and actor Ashton Kutcher, who she briefly dated after starring in the comedy Just Married with him.

By the 1990s, Brittany Murphy began securing supporting roles on TV and film, and in 1995, she hit it big with her role in the hit film Clueless as Tai Fraser. Though this was only her second-ever film role, Clueless launched her career.

Murphy’s doe eyes, edgy charm, and earnest laugh made her popular in the early 2000s with roles in films like Little Black Book and 8 Mile, where she infamously played rapper Marshall “Eminem” Mathers’ love interest.

“Her timing was impeccable,” said director Penny Marshall, who worked with the actress on 2001’s Riding In Cars With Boys. “She could be funny. She could be dramatic. She was a terrific actress.” 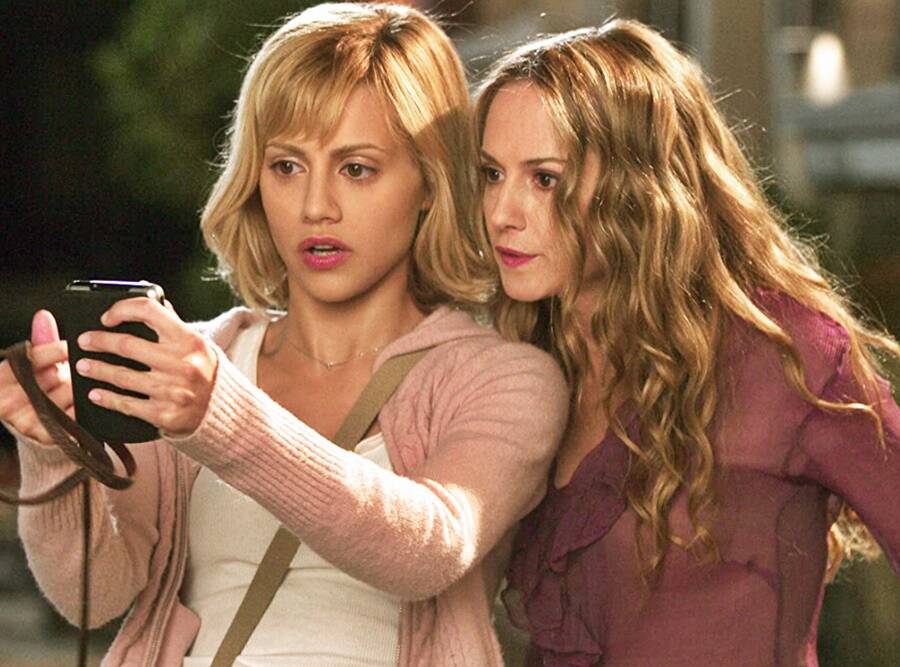 But by the end of 2009, Brittany Murphy’s career had deflated. She was dropped from a number of feature film roles and a lucrative voice acting spot as Luanne on TV’s King of the Hill after tabloid rumors of her abusing substances spread through the industry.

Murphy was painted as tardy and unfocused, barely able to hold her lines because of her bad drug habit. Murphy’s husband Simon Monjack, meanwhile, claimed the rumors were started by former managers and agents to sabotage her career.

With Murphy’s career in jeopardy, the couple considered moving to New York City where the actress could begin anew. They also hoped to start a family.

But Brittany Murphy was also the breadwinner and caregiver to her mother, who struggled against multiple bouts of breast cancer, as well as her husband, who suffered heart problems. The actress continued to work in Los Angeles, starring in low-budget film roles merely for the paychecks.

Yet, even as Murphy’s stardom continued to fade, no one could’ve guessed the tragic manner in which her life would suddenly end.

‘Help Me’: How Brittany Murphy Died 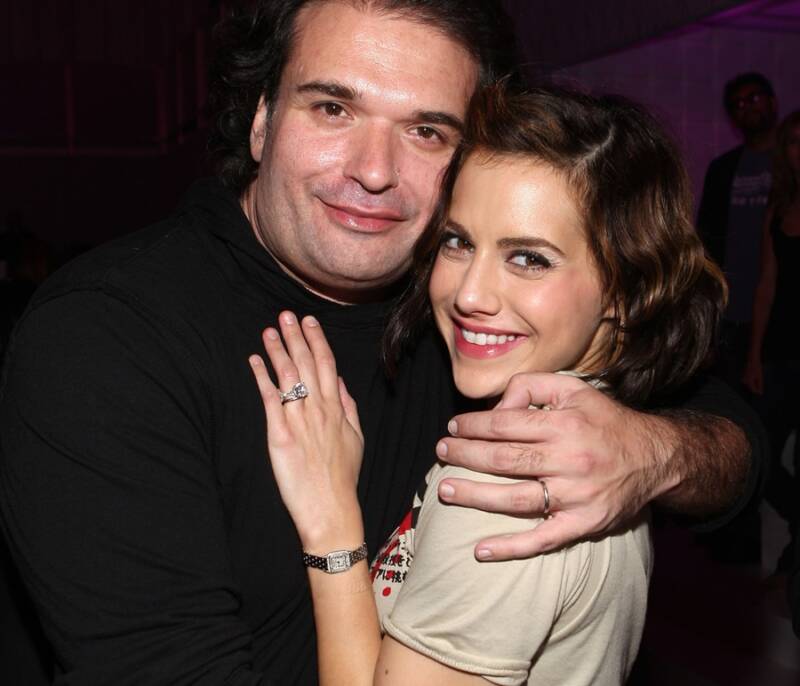 Getty ImagesMurphy’s husband Simon Monjack (pictured) died five months after her and was given the same cause of death.

In November 2009, Brittany Murphy, her husband, and her mother flew to Puerto Rico to shoot her next film Caller, a low-budget horror movie.

It didn’t take long for problems to crop up here, however. The movie’s producers tried to ban Monjack from the set after he allegedly showed up drunk. As a result, Murphy quit the project on the first day. Her husband later told The Hollywood Reporter that Murphy was unhappy that the film turned out to be a horror flick instead of a thriller as she was led to believe.

Deciding to turn the work trip into a family vacation, Murphy and her family continued their stay on the island for eight more days. On their flight back home, her husband and her mother became sick with Staphylococcus aureus, the bacteria responsible for staph infections. Monjack was reportedly so sick that they had to perform an emergency landing mid-flight to take him to the hospital.

When they returned, the couple reportedly remained ill and were treated for pneumonia.

Then, in the early morning of December 20, 2009, Brittany Murphy collapsed on the balcony of her Hollywood Hills mansion.

“She was lying on the patio trying to catch her breath,” her mother recalled. “I said ‘Baby, get up.’ She said: ‘Mommy, I can’t catch my breath. Help me. Help me.'” 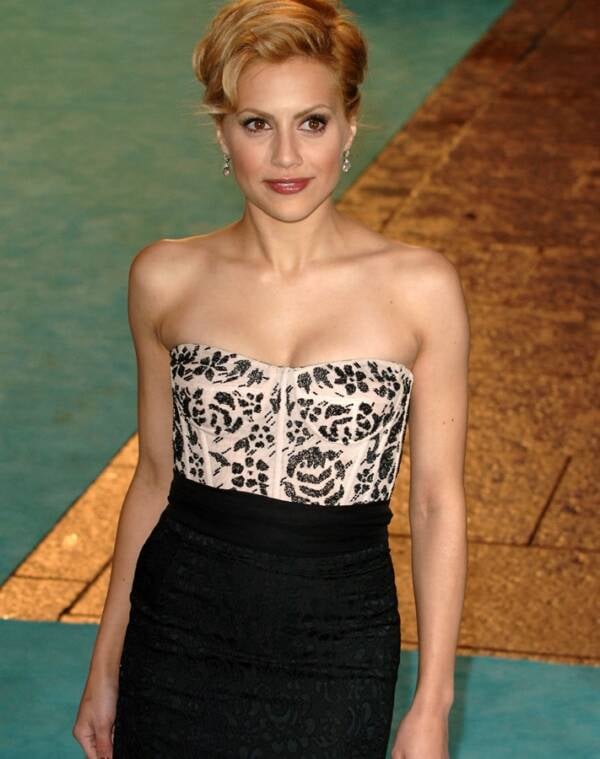 Getty ImagesThe coroner’s autopsy cited a combinaton of pneumonia, anemia, and “multiple drug intoxication” as the cause of her death.

Because Murphy had been sick for six weeks at this point, and because — as her mother claimed — she had a flair for the dramatic, her cries weren’t taken seriously. Monjack remembered that she said to her mom, “I’m dying. I’m going to die. Mommy, I love you.'”

Hours later, Murphy collapsed for a second and final time in her bathroom. She was rushed to Cedars-Sinai Medical Center where she died at only 32 years old.

According to her husband, the bathroom had been a sacred space for Murphy, who used to spend hours in front of the mirror trying on different make-up. She enjoyed hanging out there while listening to music and reading magazines. Now, the sacred room was the place of her grisly death.

The Los Angeles County Coroner ruled the death of Brittany Murphy as “accidental.” Ultimately, they believed a lethal combination of pneumonia, which Murphy possibly caught from the staph infection her family contracted on their trip, an iron deficiency, and “multiple drug intoxication” claimed her life. Her husband, meanwhile, said the actress died of “heartbreak” due to her mistreatment in Hollywood.

But Monjack’s similar death five months later raised flags for many. His was reportedly caused by pneumonia and anemia as well, and while some theorized toxic mold may have made its way into their home, others suspected foul play.

Why Brittany Murphys’ Death Is Still Mired In Controversy 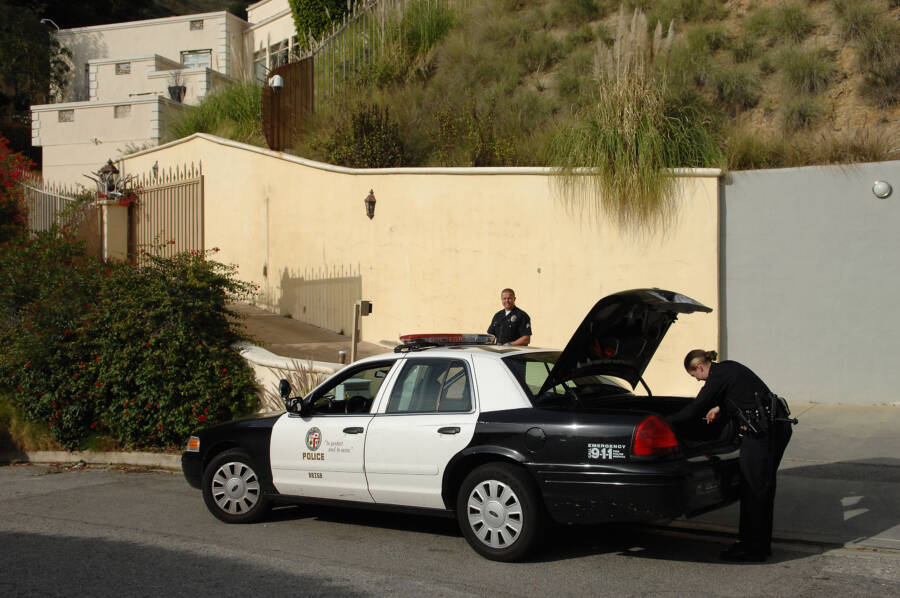 Getty ImagesBrittany Murphy’s house on the day of her death.

In November 2013, an independent inquiry was launched by Brittany Murphy’s father, Angelo Bertolotti, into her death. This second toxicology report, which was analyzed by a forensic pathologist, found traces of different heavy metals in Murphy’s blood which led her father to believe that she was poisoned.

“I have a feeling that there was definitely a murder situation here,” Bertolotti told Good Morning America while implying that “different family members” played a role in his daughter’s death. He initially believed Monjack may have been responsible for killing her, believing he was controlling and purposefully destroying her career.

But Sharon Murphy disputed Bertolotti’s claims in an open letter. The metals — specifically, antimony and barium — found in the new report have since been dismissed as a possible result of Murphy’s frequent hair dying.

There was also the bizarre conspiracy theory that Brittany Murphy was targeted by the government due to her friendship with a Hollywood filmmaker and whistleblower.

This rumor was supported by the allegation that Monjack had become paranoid in the months leading up to his wife’s death. According to an excerpt from a book written by Murphy’s longtime family friend in The Hollywood Reporter, Monjack believed that he and Murphy were being watched and had even installed 56 cameras across their property. Monjack also reportedly installed a scrambling device to prevent their phone conversations from being wiretapped.

But the only confirmed connection between the alleged whistleblower and Brittany Murphy was a letter that the whistleblower sent to her publicist asking for public support in the case, which the publicist politely declined. 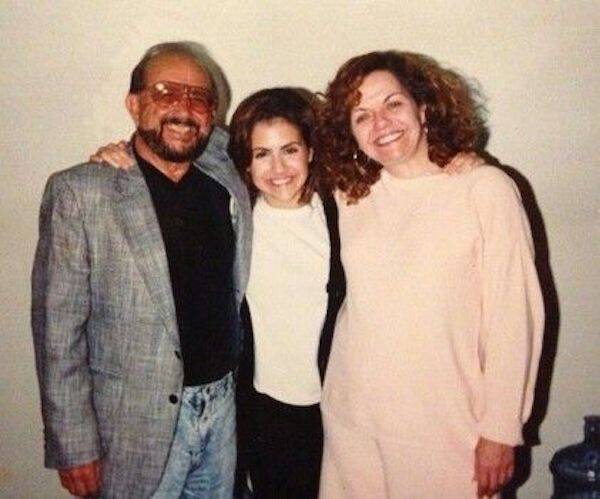 There were also suspicions that the actress had died from toxic mold growing inside her house and that her death was covered up due to a non-disclosure agreement between the property developers. While some professionals — and even Murphy’s own mother — initially claimed that the toxic mold theory was “absurd,” Sharon Murphy changed her stance in December 2011 and claimed that toxic mold did, indeed, kill her daughter and son-in-law.

She also filed a lawsuit against the attorneys who represented her in a previous dispute with the property developers.

Fans, meanwhile, have lobbed suspicions against Sharon Murphy, especially after rumors spread that she and Murphy’s husband had begun sharing the same bed after the actress died. In fact, Monjack was found in the bed he reportedly shared with Sharon Murphy on the day he died.

But Sharon Murphy’s reportedly close relationship with her daughter suggested to many that she would not hurt her, and she was never deemed a murder suspect by investigators. 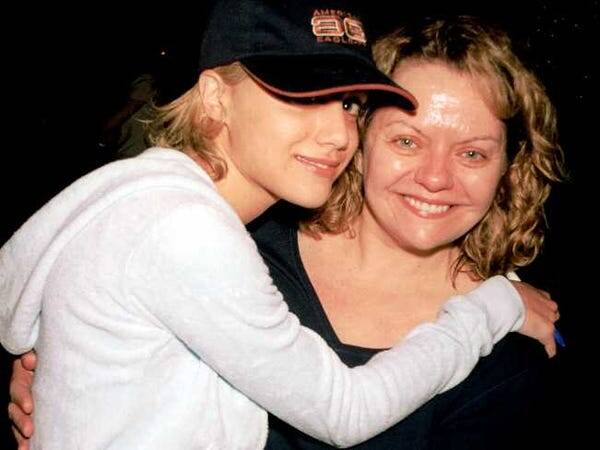 Shortly after her death, her husband and mother made sure to put their record straight. They said the reality was that Brittany Murphy relied on prescription drugs for much of her adult life to cope with the chronic pain she suffered from a car accident, but that she wasn’t a drug addict.

Murphy also allegedly suffered from heart murmurs, which her mother and husband claimed would have made it impossible for her to consume any illegal substances without endangering herself.

On the day of her death, she had reportedly taken a cocktail of drugs including the antibiotic Biaxin, migraine pills, cough medicine, the anti-depressant Prozac, a beta-blocker she got from her husband, and a few over-the-counter meds for period cramps and nasal discomfort.

However, while all of these substances are legal and her death was ultimately ruled an accident, the coroner did acknowledge that the cocktail of drugs combined with her weakened physiological state probably had “adverse effects” on the actress.

Her death, though sudden, appeared to be the culmination of her deteriorating mental and physical health.

Yet Brittany Murphy’s death remains among the most shocking in Hollywood’s recent history, and it continues to inspire the industry. Indeed, it recently became the subject of a 2020 documentary titled The Missing Pieces: Brittany Murphy, which was aired on the Discovery Channel.

Now that you’ve learned the truth behind Brittany Murphy’s untimely death, read the stories behind other famous Hollywood deaths, such as the tragic demise of Judy Garland and the shocking death of James Dean.