Around Bucharest In 25 Photos

Once known as “Mini Paris,” Bucharest is the capital of Romania, as well as its financial and cultural center. This year, the city celebrated its 555th anniversary, as it was first mentioned in 1459 in official documentation. Bucharest’s impressive architecture presents itself as the city’s living, tangible history, uniquely combining Neo-Classical, Art Deco and Communist-era styles. From its luscious parks to its revolutionary memorials, Romania’s history is directly embedded within its infrastructure. 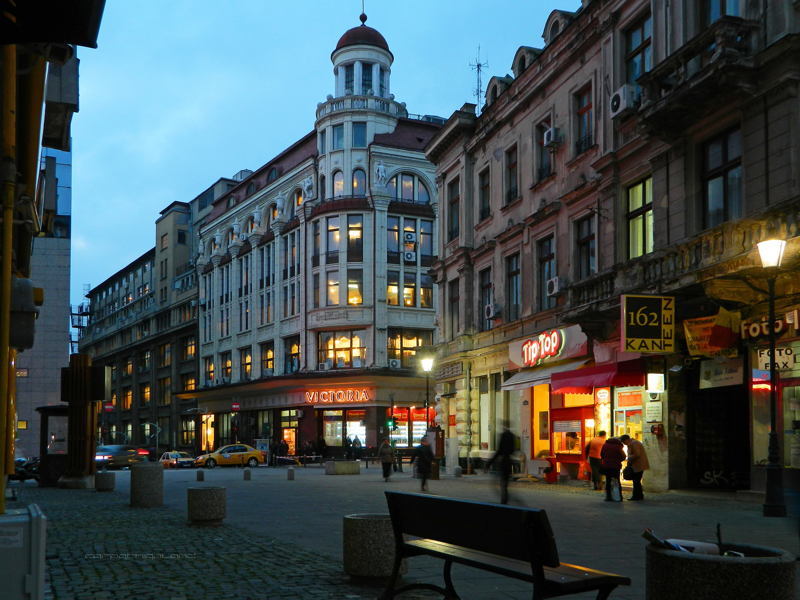 A street and district, Lipscani was once the most important commercial area of the city and Wallachia. The latter is a historical and geographical region of Romania dating back to 1246.   Source: Wikimedia 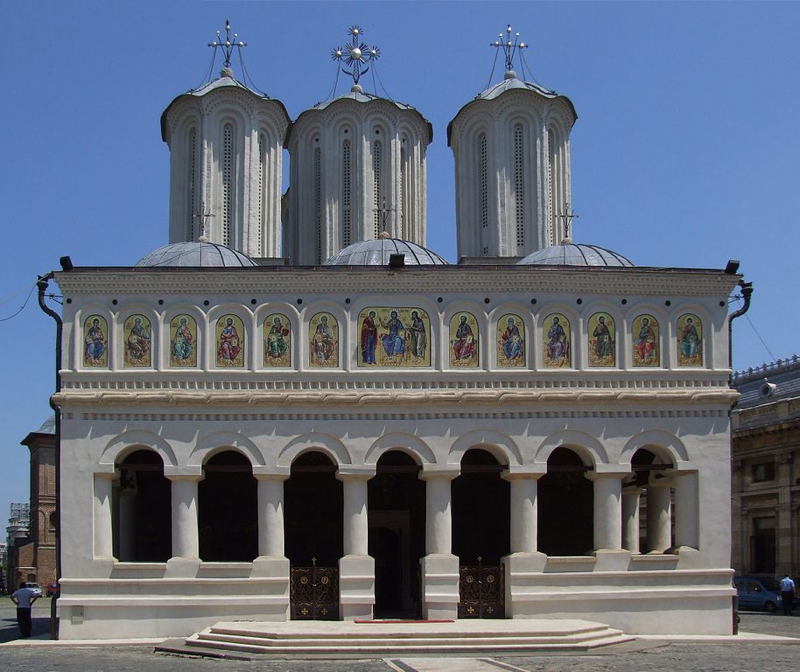 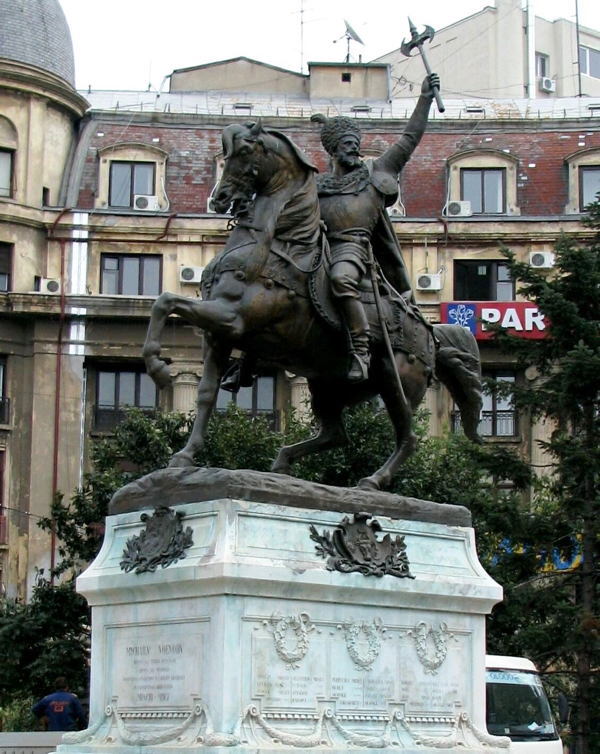 The statue of Mihai Voda Viteazul (Prince Michael the Brave) is the first statue dedicated to a national hero. Erected in 1876, the sculpture commemorates the Prince as the first leader to unite three Romanian countries and stands as inspiration for unity. Source: Unknown Bucharest 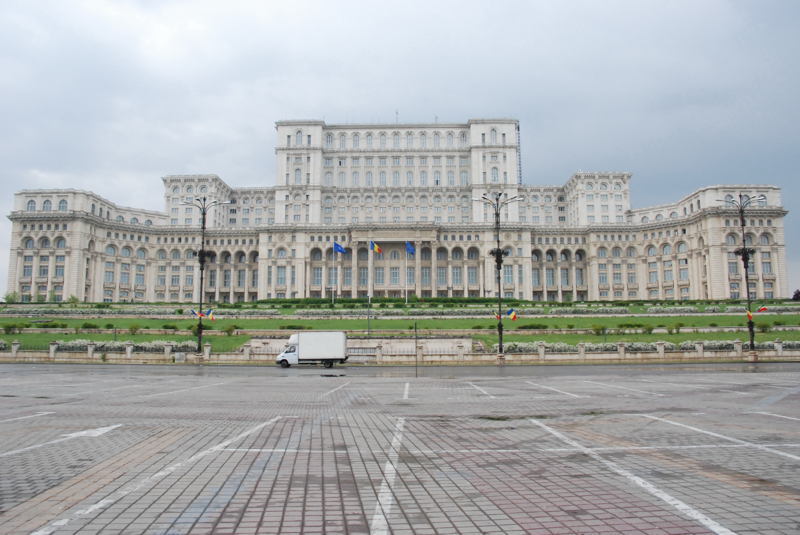 Constructed in one year from 1983 to 1984, the People’s House—the second largest building in the world—was commissioned by Communist dictator Nicolae Ceauşescu. Historic buildings were razed in order for the 12-story beast to be built, using only Romanian sourced materials. The building now houses the Parliament. Source: Wikimedia 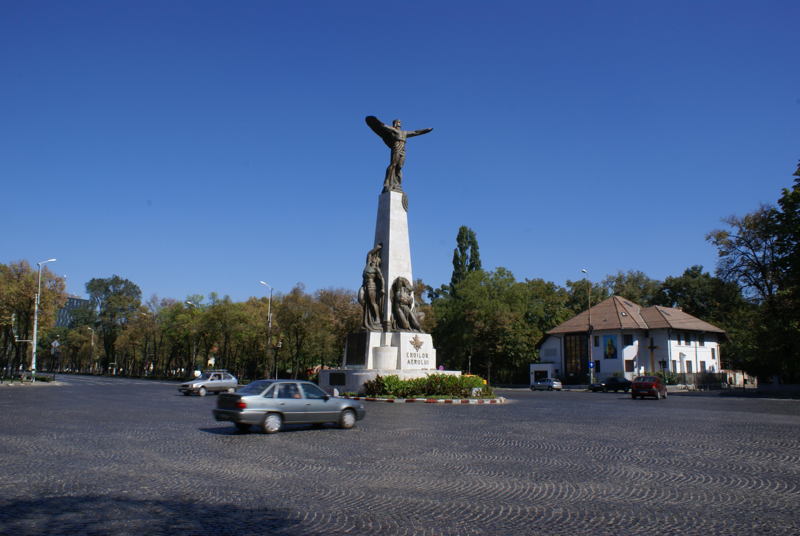 Located in Aviators’ Square off of Aviators’ Boulevard, the Aviators’ statue rises 65 feet into the air and was built by Lidia Kotzebuie and Iosif Fekete. The statue is dedicated to the airmen that lost their lives flying for Romania. Icarus, whose own ambitions led to his fall, looms over the top of an obelisk that features three other pilots in various stages of flight. Source: Wikimedia 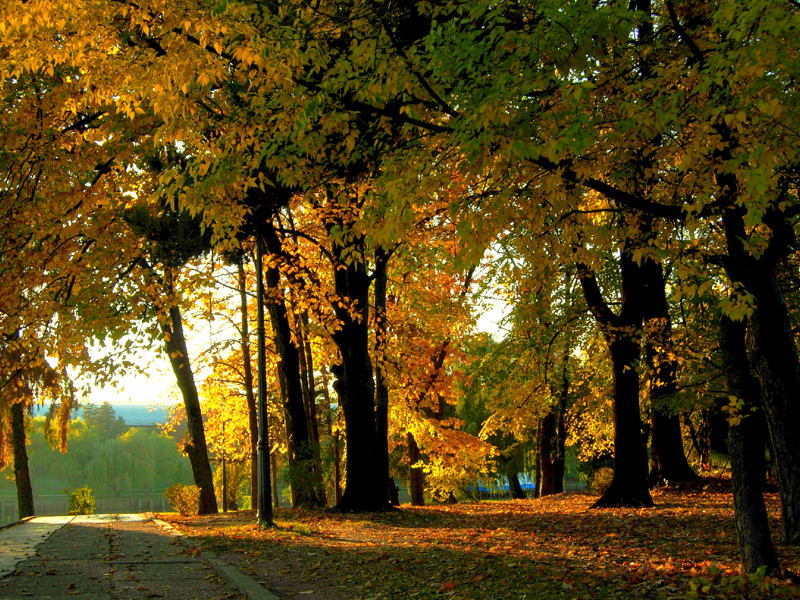 A large park on the northern side of Bucharest, Herăstrău park was dedicated in 1936. The park or “parcul” has two distinct sides, the rustic Village Museum and a recreational and boating area. Source: Wikimedia 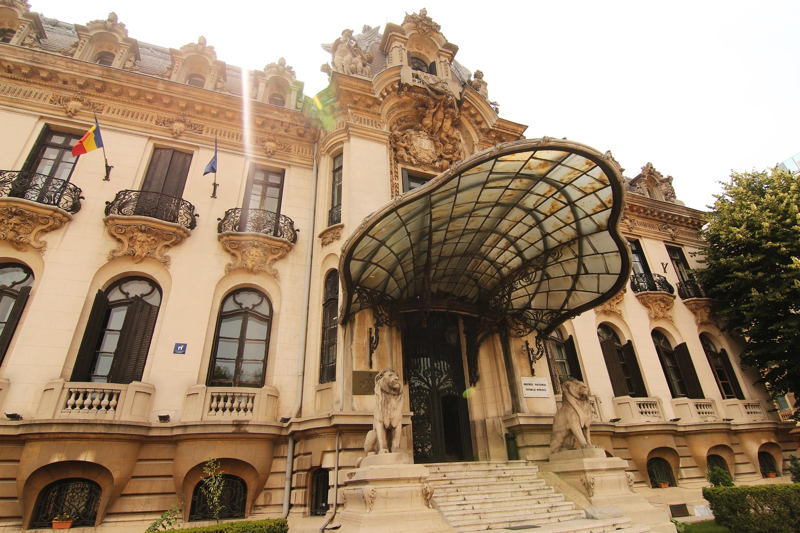 The George Enescu Museum sits inside of the Cantacuzino Palace, an Art Nouveau masterpiece displaying large statues, stained glass and rich tapestries. George Enescu, a Romanian composer, lived in a modest home on the palace grounds. Enescu’s wife requested in her will that the area be turned into a museum dedicated to her husband. Source: Wikimedia 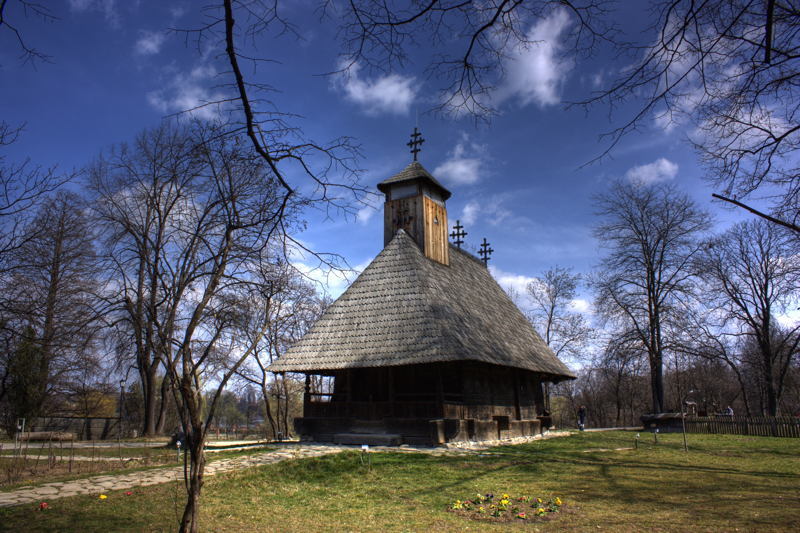 An open-air museum in Herăstrău Park, the Village Museum contains 272 authentic farms and cottages from across Romania. Source: Wikimedia 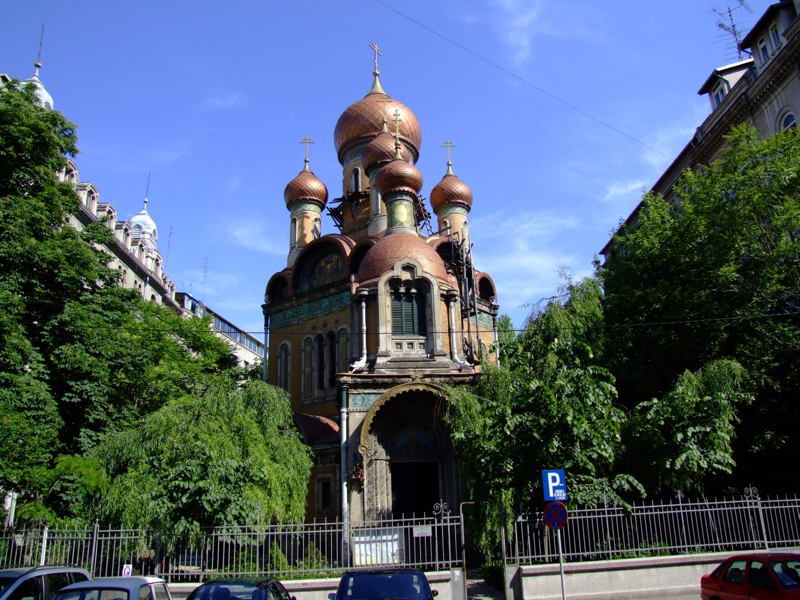 Built in 1905-1909, the little Russian Church is topped with traditional onion domes. Once a Russian Orthodox Church, it was transferred to the Romanian Orthodox Church and is open for use by the students and faculty at the nearby university. Source: Wikimedia 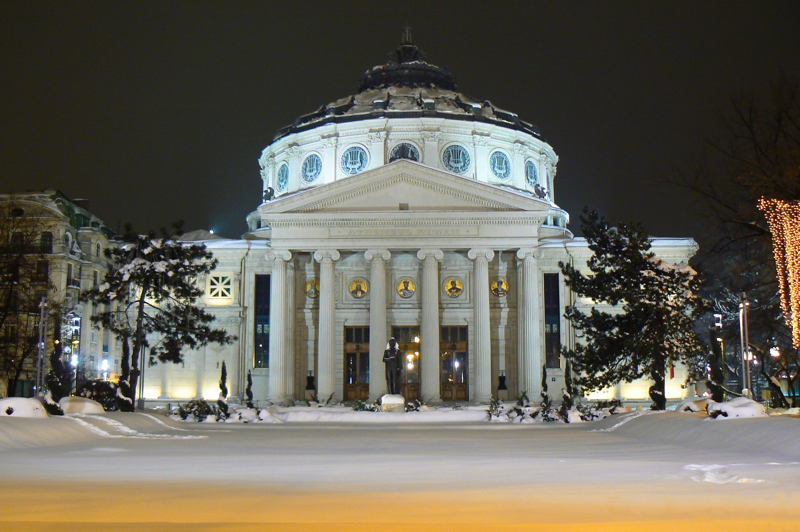 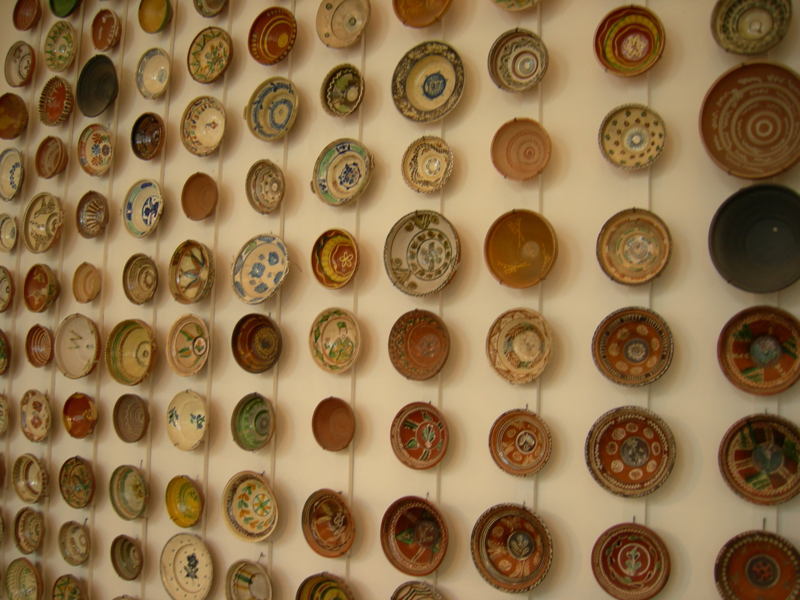 Hand painted Easter eggs, colorful terracotta pottery, religious icons and other aspects of Romanian peasant life are on display at the Peasant Museum. A small gift shop has replicas of Romanian traditional clothing and other peasant art available for sale. Source: Wikimedia 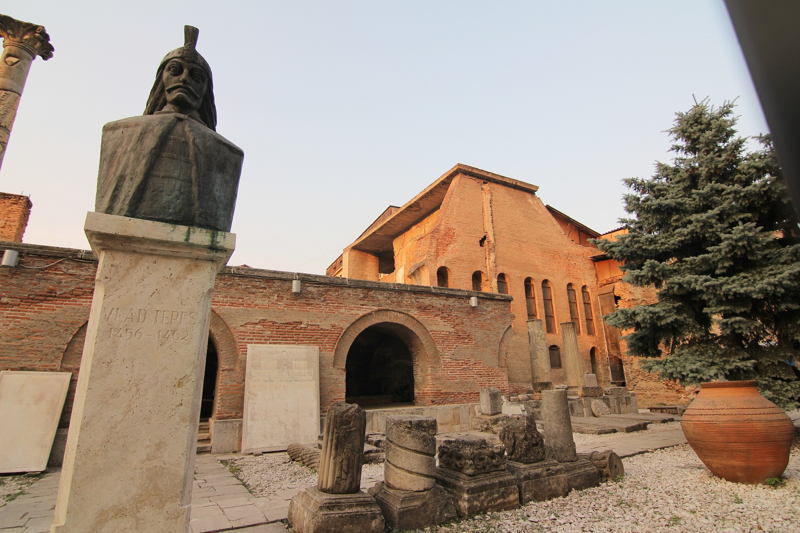 In the middle of The Old City, the Curtea Veche or Old Princely Court was the hub around which Bucharest grew. Vlad Tepes, also known as Vlad the Impaler, most likely constructed it in the late 14th century. A bust of the notorious Prince of Wallachia watches over the courtyard and every one that walks by. Source: Wikimedia 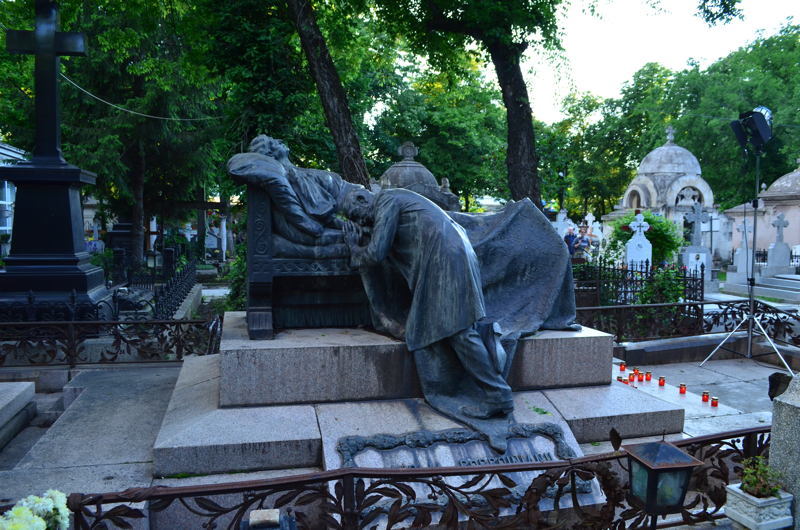 The most historic cemetery in Bucharest, the Bellu Cemetery is the final resting place for myriad artists, authors and politicians. The graves feature grand sculptures and monuments, and are grouped by profession. Source: Roaring Romania 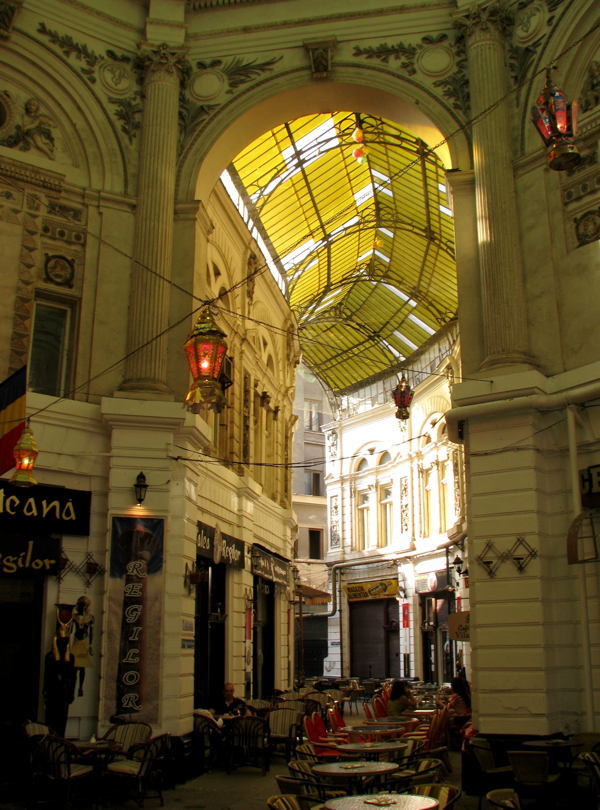 Sitting between the Lipscani district and the Calea Victoriei, the Macca-Villacrosse passage was covered with glass at the end of the 19th century to protect visitors from the rain. The ground floor was intended for shops while the upper levels of the buildings were designed as an inn. Source: Unknown Bucharest 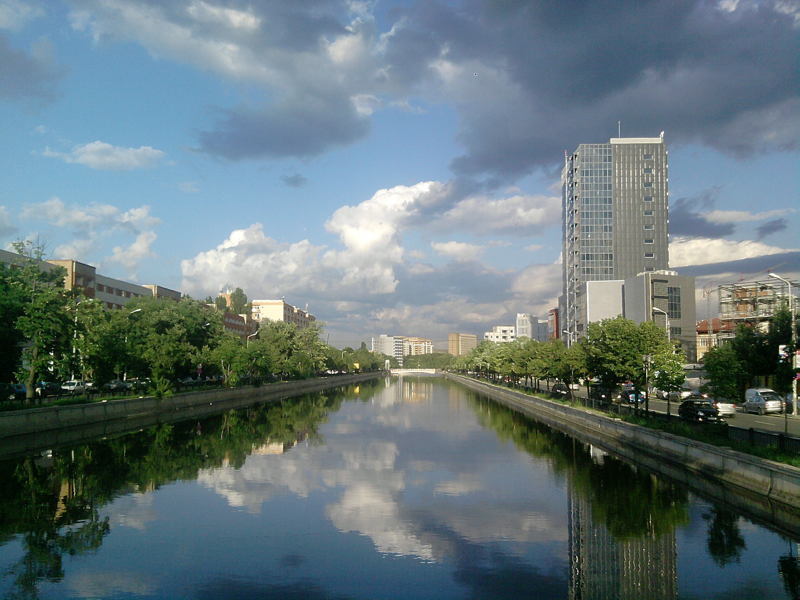 The Dâmboviţa is a river in Romania that connects to the Argeș River in Budești. The river was extremely polluted until 2011 when the largest ecological project in Romania was completed with the building of the Glina Wastewater Station. The station treats the water flowing into the Dâmboviţa and has since improved water quality. Source: Wikimedia 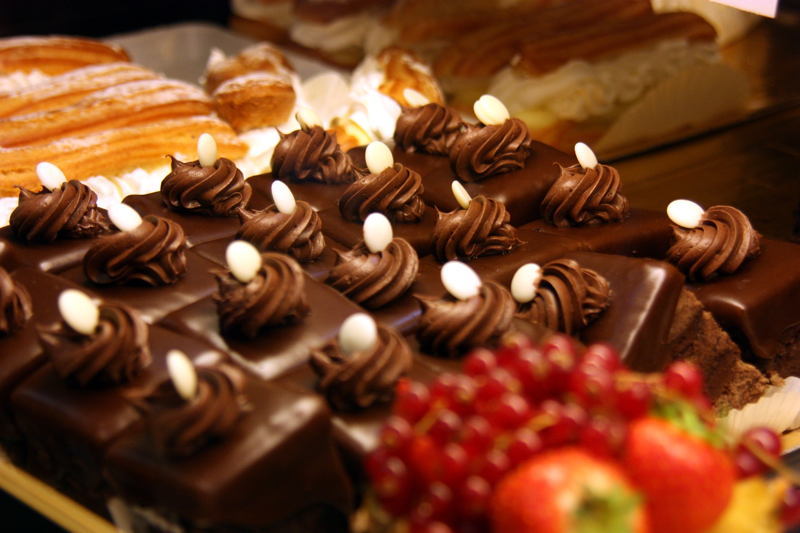 A city rife with restaurants, cafes and clubs, Bucharest’s patisseries are filled with baked goods and sweets. They’re the perfect places to grab a strong espresso and a delicately decorated treat. Source: Wikimedia 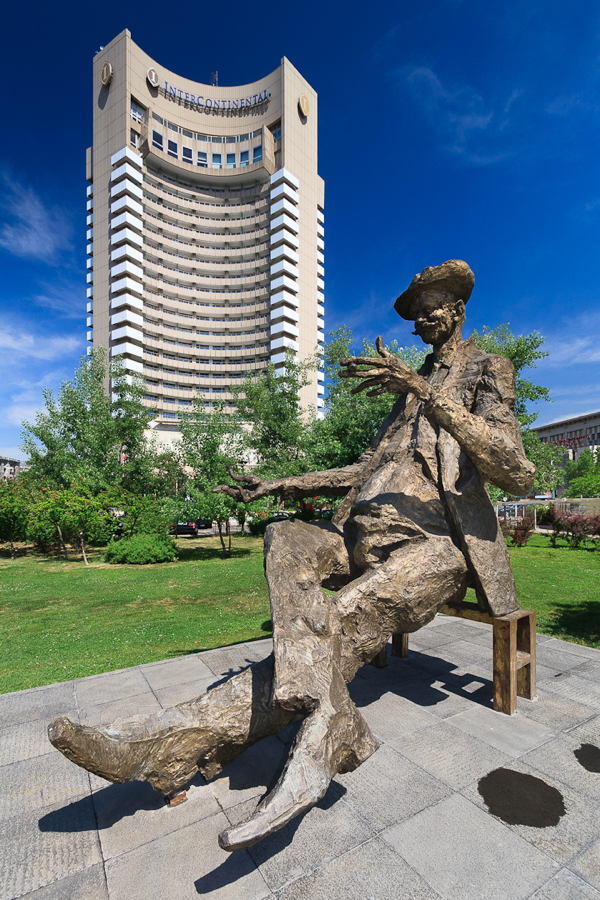 Located on University Square in front of the National Theatre is a bronze statue of Ion Luca Caragiale, Romania’s favorite playwright. Unveiled in December 2010, the statue replaced an old statue of the same man. Locals claim that the old statue was in fact a Lenin statue that featured Caragiale’s head. Source: Wikimedia 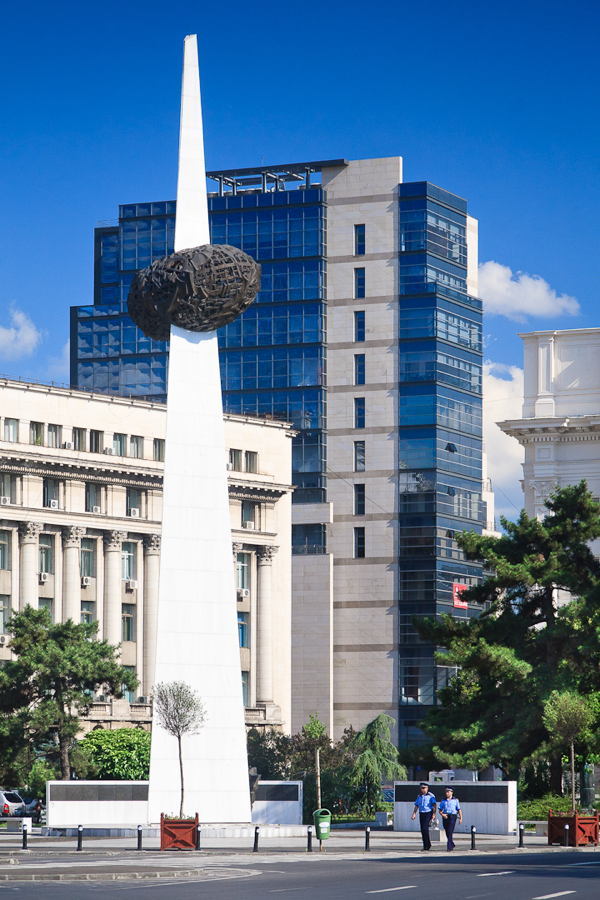 A memorial in Revolution Square, the Memorial of Rebirth was commissioned to commemorate the victims of the Romanian Revolution of 1989 that overthrew the communist regime. A strange modern art piece, it has been described as a “an olive on a toothpick” and “the potato of the revolution.” Due to its unpopularity, it’s guarded at all times. Source: Wikimedia 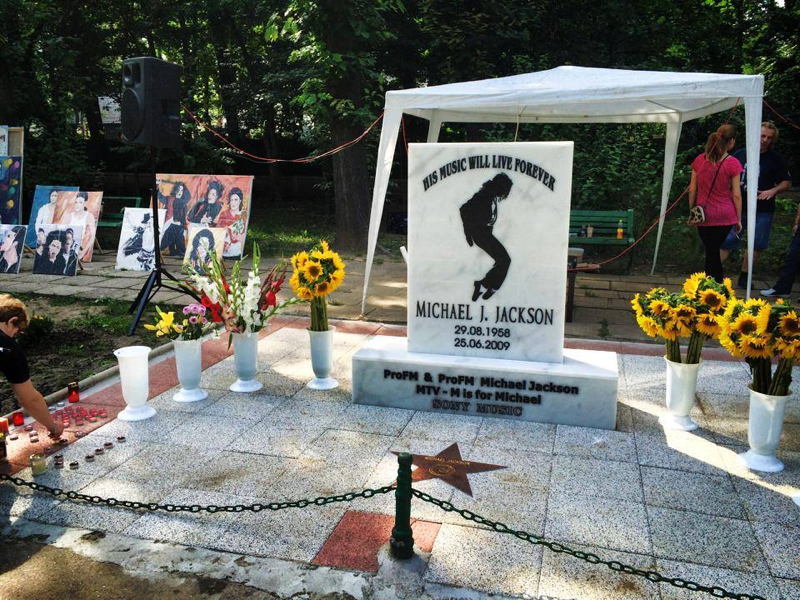 Singer Michael Jackson is so loved in Romania that there is a memorial dedicated to him in Herastrau Park. The alley that runs along the side of the monument is also named after him. Source: MJ Vibe 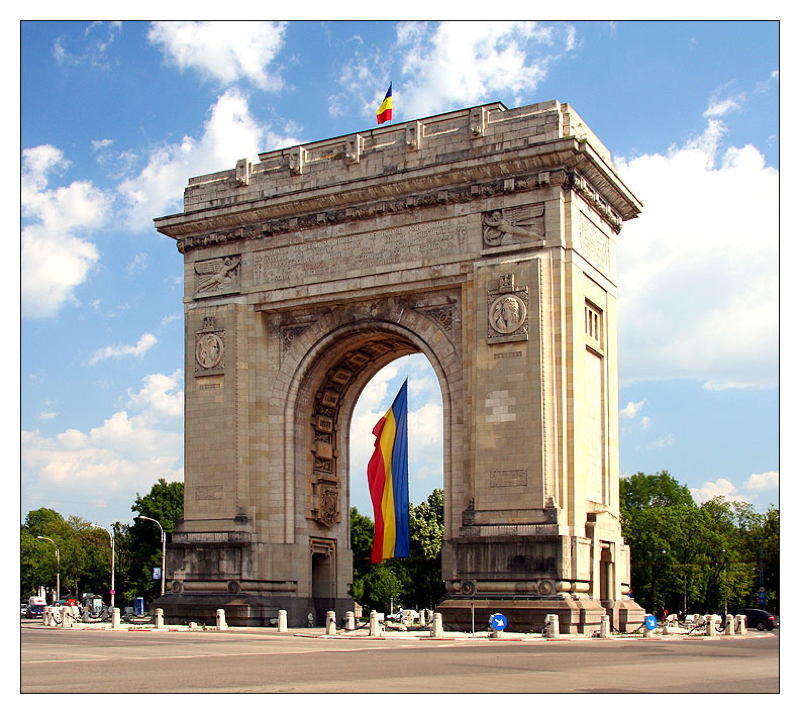 Built in 1922, the Arcul de Triumf was constructed to honor Romania’s World War I dead. Originally made of wood, it was rebuilt in stone in 1935 by Petru Atonescu. Source: Bucharest Accommodation 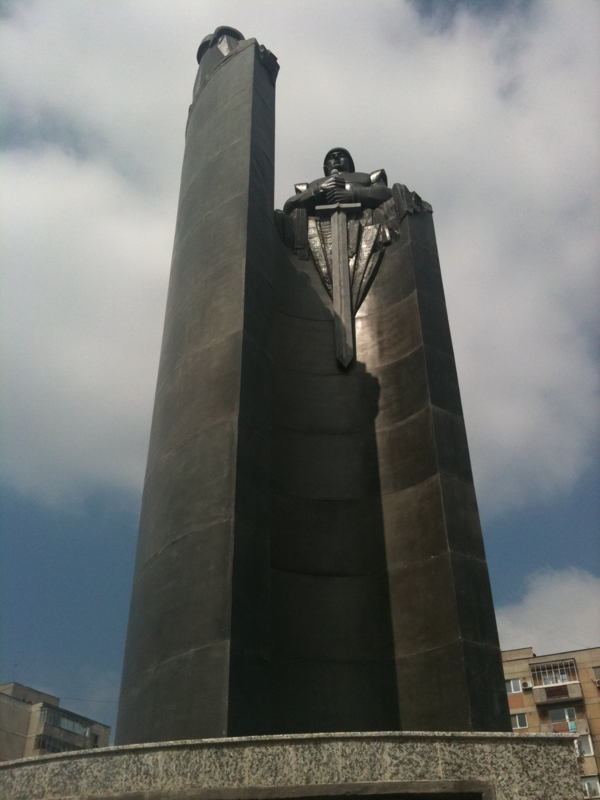 In front of the Children’s Palace stands a memorial to Romanian soldiers that have died fighting for the country. There’s no better place for a war monument than a children’s park. The very tall installation features two soldiers staring at each other and holding swords. Source: Bucharest ife 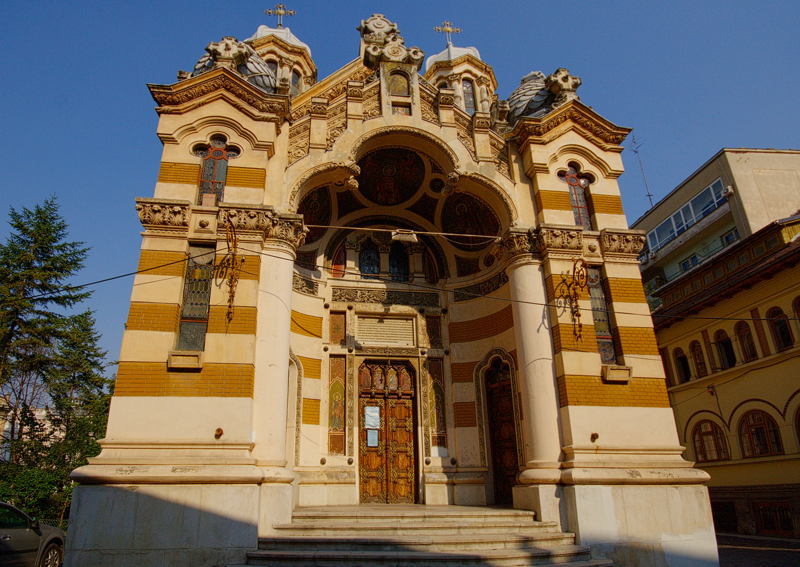 Looking over Amzei Square is the Amzei Church, constructed in 1810 by nobleman Amza. It was almost entirely rebuilt in 1846 and two steeples were added in 1875. Source: Wikimedia 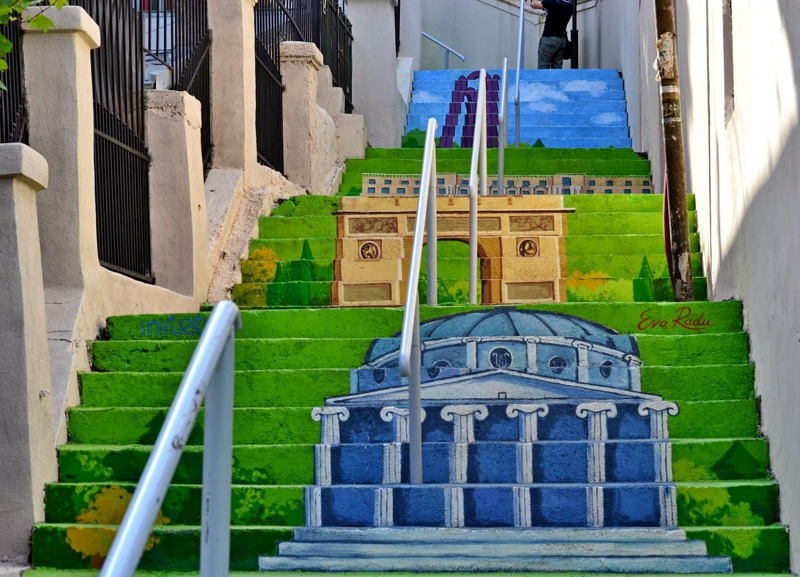 Strada Xenofon is the only street with steps in Bucharest. Painted by Eva Radu, the steps present eight of the most historical buildings in the city. Source: Auto Bild 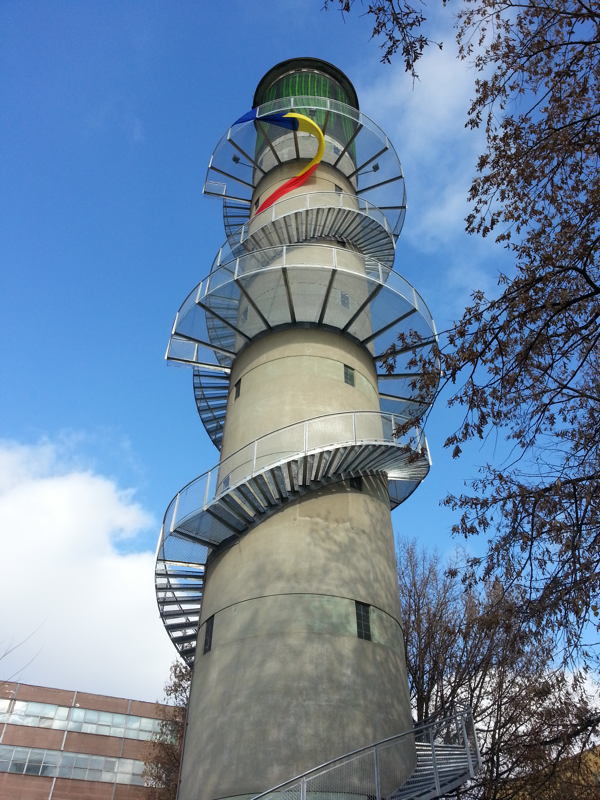 The Pantelimon Art Tower is nearly 120 feet tall and features a mural at the top of a disused water tower. A staircase was added to the outside of the facility so visitors can get a closer look at the art at the top, as well as a bird’s eye view of the city. Source: Bucharest Life 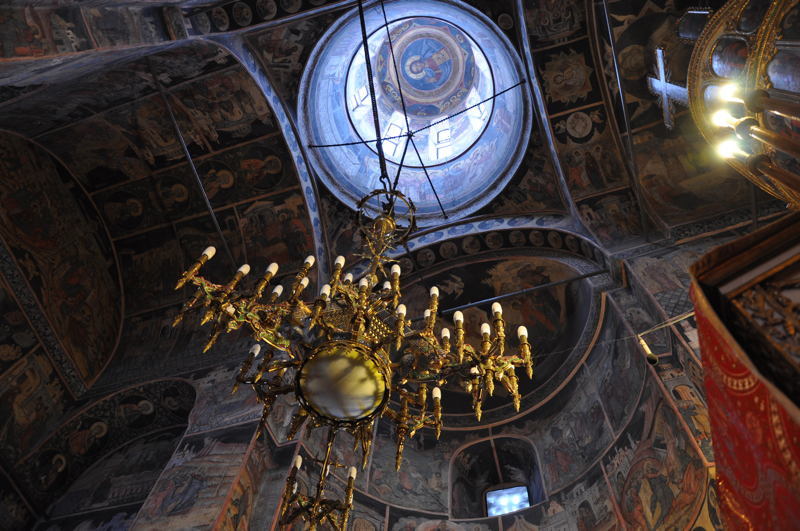 Originally built between 1720 -1722, Kretzulescu Church’s exterior was originally painted, but restoration work changed it to brick in 1936. An Eastern Orthodox Church, it was slated for destruction during the Communist era, but was saved by architects who valued it for its Brâncovenesc style. Source: Wikimedia