‘The Day The Music Died’: Inside The Tragic Story Of Buddy Holly’s Death 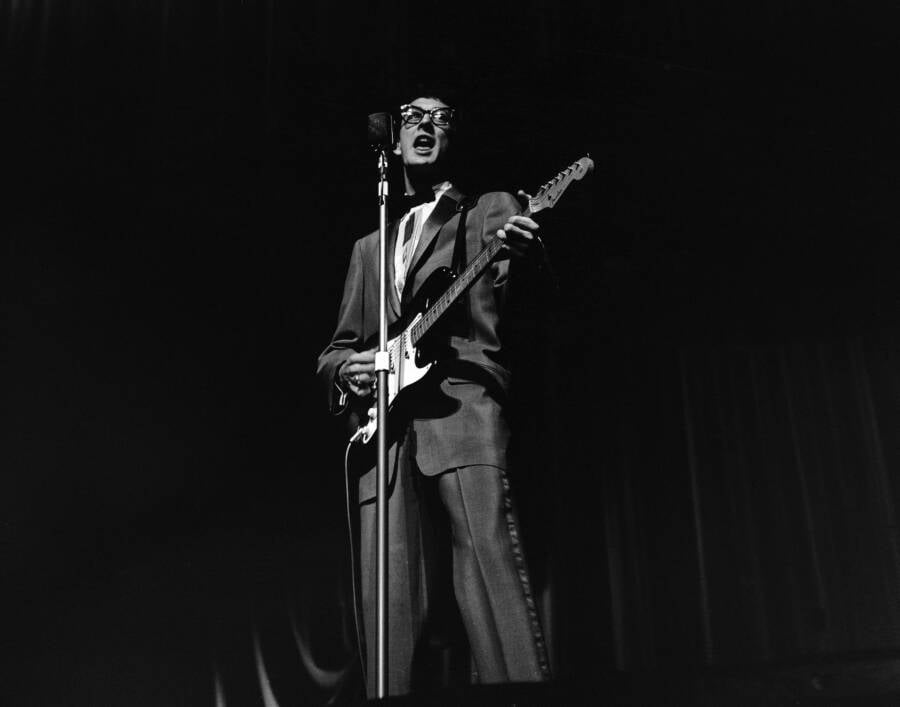 When it comes to impact on the nascent genre of rock and roll, Buddy Holly’s influence is nearly insurmountable. He only had had one number one hit with “That’ll Be the Day,” but he inspired nearly every next-generation legend from Bob Dylan to The Beatles to follow in his footsteps. Then, at 22 years old, Buddy Holly died.

In January 1959, with his new chart-topping hit dominating American airwaves, the young Texan embarked on a Midwestern string of ballroom and auditorium shows called The Winter Dance Party. The tour began on January 23 in Milwaukee during one of the coldest winters on record. The musicians traveled in an unheated bus that frequently broke down.

So one night, Holly chartered a plane to get to the next gig. Instead, he and his tour partners Ritchie Valens and J.P. Richardson were torn from the skies by wintry conditions six mere miles from the Clear Lake, Iowa, airstrip that pilot Roger Peterson had departed from.

All four died upon impact at 12:55 a.m. on Feb. 3, 1959. Holly’s bassist, Waylon Jennings, would be haunted by that night for decades, as he had casually given up his seat for a flu-ridden Richardson moments earlier. Known since as “the day the music died,” Buddy Holly’s plane crash remains one of the most tragic moments in rock and roll history.

The Short Life Of Buddy Holly

Born Charles Hardin Holley on Sept. 7, 1936, in Lubbock, Texas, the musical ingenue was nicknamed “Buddie” by his mother, who felt his given name was too adult for the young boy. The spelling changed to “Buddy” after Holly’s first recording contract misspelled it, and the name Buddy Holly was stuck for good. 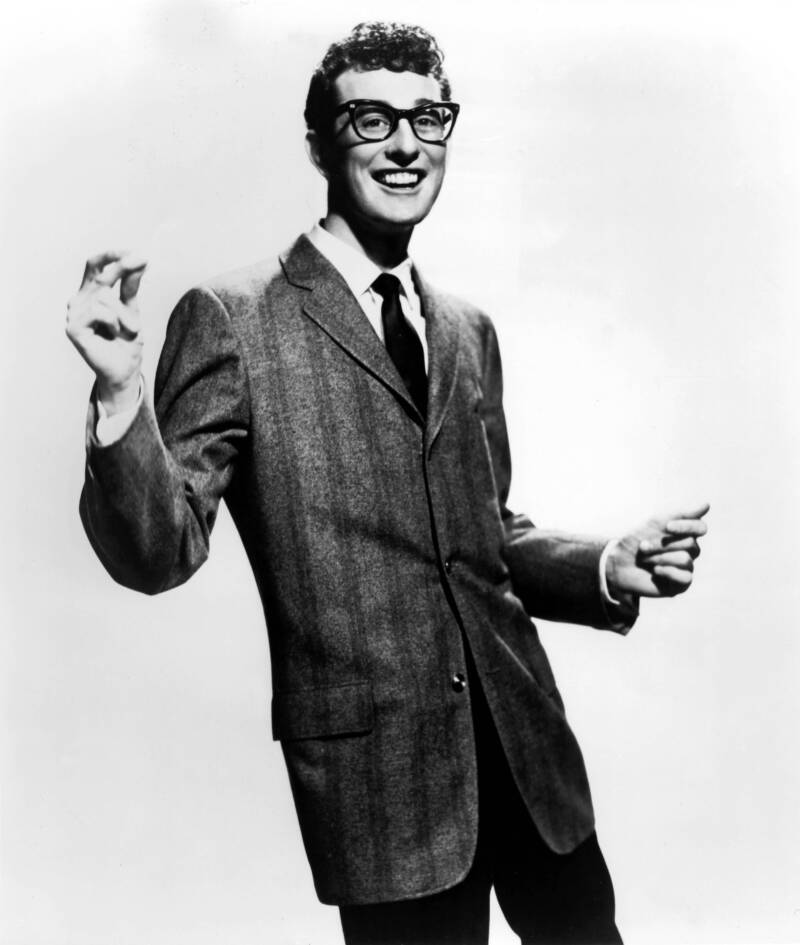 Wikimedia CommonsAlthough he only had one number one song, Buddy Holly influenced countless music legends.

As the youngest of four children, Holly relied on his brothers to teach him the guitar. With his parents ardently supporting their musical household, Holly learned how to play the fiddle and piano, as well. His parents, Lawrence Holley and Ella Pauline Drake, even wrote their local paper in support of rock and roll.

While his siblings formed a tiling business upon graduating from high school, Holly spent his spare time rehearsing country songs he heard on the radio. He had barely graduated himself when he opened for Elvis Presley during a 1955 tour stop in Lubbock. The next year, at the age of 19, Buddy Holly and The Crickets signed with Decca Records.

His time at Decca, however, was short-lived, and only produced two singles that failed to make an impression. In 1957, their contract was not renewed. Within a few months, however, he and The Crickets independently recorded “That’ll Be the Day,” which topped the “Best Sellers in Stores” chart by September.

By 1958, it was clear that Holly and The Crickets needed to part ways. He wanted to stay in New York while the rest of the group wanted to live in their home state. And he left the band in December of that year.

After a vacation with his wife, María Elena Santiago, he agreed to the Winter Dance Party tour. The string of shows across the Midwest in early 1959 saw Holly scheduled to perform every night for over three weeks straight, often in town hundreds of miles apart. Temperatures dropped to minus 35 degrees.

Tragically, one spontaneous decision to brave dangerous weather conditions ended with Buddy Holly’s plane crash when he was just 22.

Buddy Holly and his tourmates Ritchie Valens and J.P. Richardson had just left the Surf Ballroom in Clear Lake, Iowa to the rapturous applause of 1,000 fans. It was Feb. 2, 1959. The tour hadn’t even reached the half-way point. But Holly had tired of the arduous late-night drives and suggested flying instead. 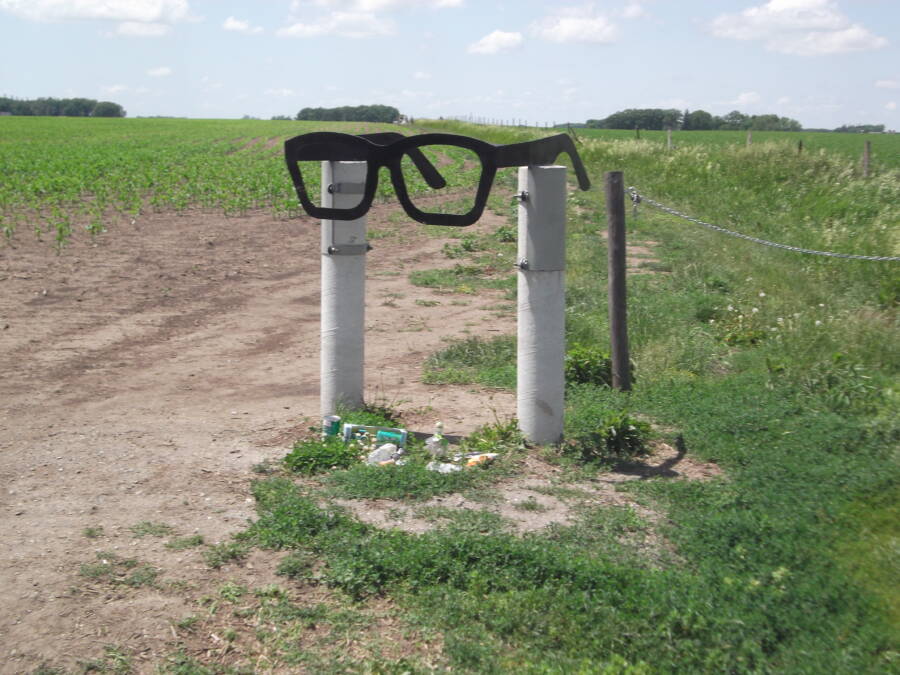 Up until that point, the tour schedule saw Holly and his peers drive more than 300 miles on more nights than not. The bus often broken down, stranding them on the side of the road to endure Midwest winter temperatures until help arrived.

Holly was riding high on “That’ll Be the Day,” while Richardson was known for “Chantilly Lace.” Valens had written “La Bamba,” the world-famous song that would see him posthumously inducted into the Rock and Roll Hall of Fame.

Holly chartered a plane from Dwyer Flying Service to take the group to their next show in Moorhead, Minnesota, via Fargo, North Dakota, so that they could rest and launder their clothes before the next gig. Limited capacity left bandmates to argue over who would get a seat, with Valens and guitarist Tommy Allsup flipping a coin to decide.

Meanwhile, bassist Waylon Jennings was gracious enough to give his spot to Richardson, who was suffering from the flu. Jennings later said that, after Holly joked with him that he hoped the bus crashed, he told Holly, “I hope your ol’ plane crashes.”

Departing the airport shortly before 1:00 a.m., the plane crashed mere miles after takeoff. While skidding across an icy field for 558 feet, all passengers and the pilot were ejected.

The Day The Music Died

Pregnant with Holly’s unborn child, María Elena Holly suffered a miscarriage after learning of Buddy Holly’s plane crash on the news the next day. Ever since, authorities made it policy to notify victims’ families first — then press. 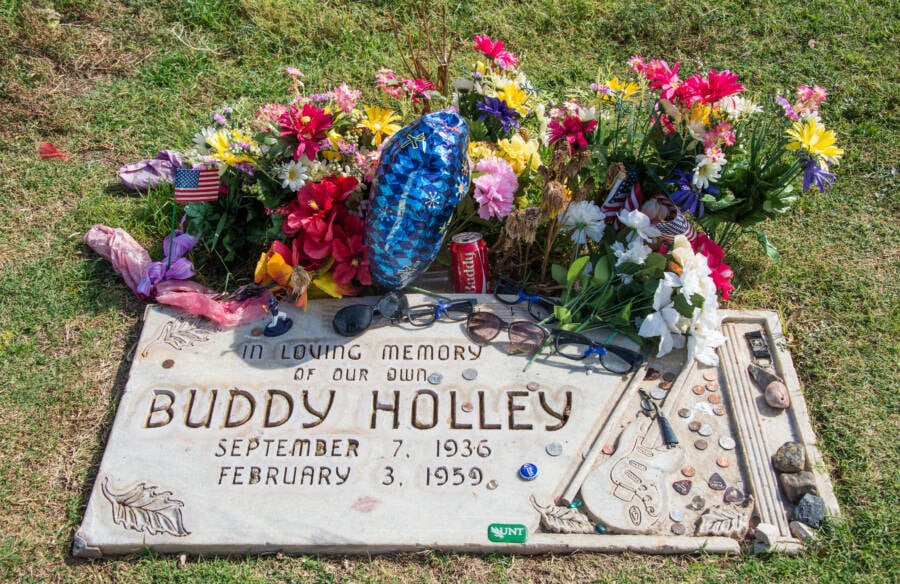 Flickr/Kent KanouseBuddy Holly was buried in the Lubbock Cemetery in Texas in February 1959. Buddy Holly’s death became known as “the day the music died.”

While it would take another 12 years for Don McLean to record “American Pie,” the melancholy epic chronicled the tragedy for generations and officially inscribed Feb. 3, 1959, as “the day the music died.” McLean would describe it as “a morality song” documenting that “things are heading in the wrong direction.”

For Jennings, being offered the Winter Dance Party gig and leaving as one of its few survivors left him with survivor’s guilt for decades.

“I was so afraid for many years that somebody was going to find out I said that,” Jennings recalled of his joke. “Somehow I blamed myself. Compounding that was the guilty feeling that I was still alive. I hadn’t contributed anything to the world at that time compared to Buddy. Why would he die and not me?”

Determined to see the Winter Dance Party through and keep his promise, Jennings performed songs for another two weeks — and missed Holly’s funeral at the Tabernacle Baptist Church in Lubbock, Texas on Feb. 7, 1959.

From Elton John and Bruce Springsteen to Mick Jagger and The Clash, Buddy Holly inspired a litany of incoming icons, an Oscar-winning film, and one of the greatest American rock and roll songs of all time.

After learning about Buddy Holly’s death, read about the satanic legend of blues musician Robert Johnson. Then, learn about the death of Elvis Presley.