Why America Wouldn’t Be America Without This Mountain Of Skulls

This one startling photo captures the horrifying extent of the buffalo slaughter carried out by early settlers of the American West. 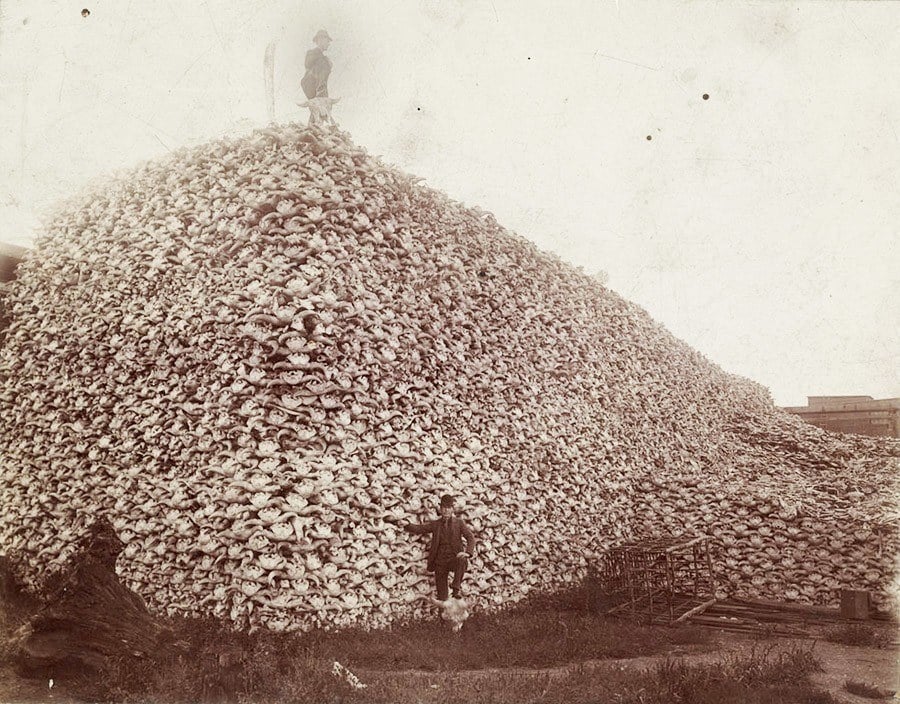 This mountain of skulls piled up in the Midwest in the mid-1870s captures the extent of the buffalo slaughter carried out by American settlers. Image Source: Wikimedia Commons

The American bison was once the symbol of a vast, limitless country filled with seemingly endless land and equally endless opportunity. But American settlers soon ensured that the bison would ultimately symbolize the dark, ugly side of “manifest destiny.”

Estimates of how many bison used to roam the Midwest, before European settlers moved in, range from 30 to 60 million. Native Americans once lived in harmony with these migratory herds, while using the bison for food, their hides for clothing and shelter, and their bones for tools and weapons.

But the American settlers advancing from the east were hungry for more land and more resources, including bison. Hunters on cross-country trains would even take aim at the wild creatures from their windows and shoot down several at a time.

The hunting train would then slow to a stop for people to skin the animals for coats, or cut out their tongues for culinary delicacies in the cities along the Eastern seaboard. Unlike the Native Americans, these hunters left the rest of the bison to rot.

Overall, between 1800 and 1900, the bison population was brought down from the estimated 30-60 million to approximately 325. While more exact statistics on the amount of bison killed by settlers are hard to come by, the full scope of the problem can be glimpsed in the numbers from one railroad company: 500,000 bison hides shipped east between just 1872 and 1874.

As startling as the numbers behind this mass buffalo slaughter are, most settlers seemed to view the animal as just one small step in manifest destiny, the quasi-religious belief that American settlers were destined to own the land of the New World all the way from the Atlantic to the Pacific.

Even the extermination of Native American populations — another enormous casualty of manifest destiny — is directly tied to the bison.

“I would not seriously regret the total disappearance of the buffalo from our western plains, in its effect upon the Indians,” Columbus Delano, Secretary of the Interior, wrote in 1873.

The following year, General Philip Sheridan, a leading fighter in the Indian Wars, told the Texas Legislature that bison hunters were “destroying the Indian’s commissary,” and the people should let them “kill, skin, and sell until the buffaloes are exterminated.”

Conflicts and ideologies like these are oftentimes hard to visualize in concrete terms and solid images. But in the case of manifest destiny, one need look no further than the buffalo slaughter.

Today, however, through careful conservation and land management efforts, the bison population has been brought back up to around 500,000.