See the new pictures from Hubble that reveal the Tarantula Nebula's enormous star cluster containing the largest known star in the universe. 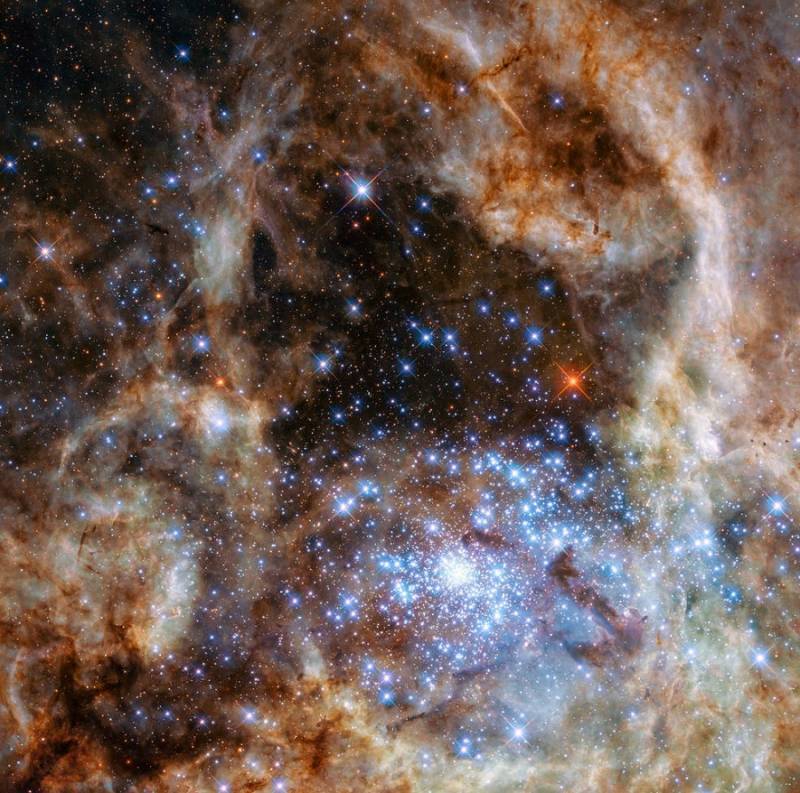 The massive star cluster of the Tarantula Nebula, as photographed by the Hubble Space Telescope. Image Source: NASA

Recently released images from the Hubble Space Telescope reveal the universe’s largest known cluster of giant stars — including the largest star yet discovered — all huddled together in the R136 cluster of the Tarantula Nebula.

R136 is essentially the Hollywood Boulevard of the universe, an exclusive hangout of the Tarantula Nebula section of the Large Magellanic Cloud galaxy some 170,000 light-years away. Nine stars more than 100 times larger than our sun, and dozens of stars 50 times bigger, are all gathered in this one secluded area.

And topping them all is the most massive star on record: R136a1, which is more than 250 times bigger than our sun.

It only takes a quick glance at the Hubble image above to know that the Tarantula Nebula is something special. Because so many of these stars are young, they still have their blue coloring.

And not only do these blue stars look like a sprinkle of pixie dust, they are likely to enlighten astronomers as to how massive stars form like never before. Right now, massive star formation is about as mysterious as the alien structures a NASA scientist found last October.

“There have been suggestions that these monsters result from the merger of less-extreme stars in close binary systems,” Saida Caballero-Nieves, co-author of the study that found the cluster above, wrote in a statement. “From what we know about the frequency of massive mergers, this scenario can’t account for all the really massive stars that we see in R136, so it would appear that such stars can originate from the star-formation process.”

“Once again, our work demonstrates that, despite being in orbit for over 25 years,” Paul Crowther, the lead author of the study, said, “there are some areas of science for which Hubble is still uniquely capable.”

Next, check out the most amazing nebulae photos ever taken. Then, see the most important image captured by Hubble.