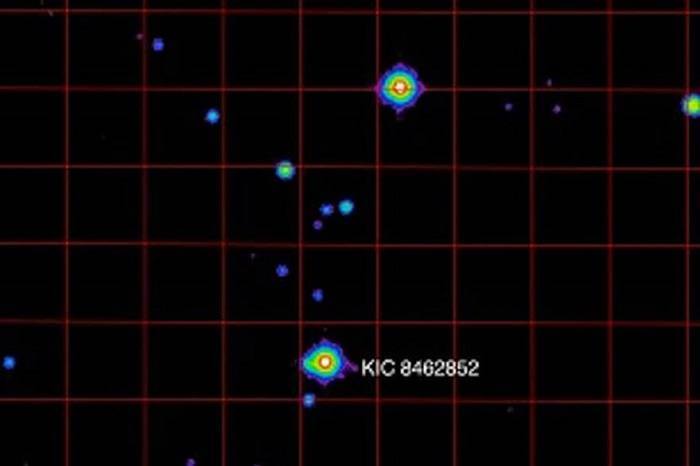 When scientists using NASA’s Kepler Space Telescope get overwhelmed with information collected from the more than 150,000 stars currently being observed, they turn to “citizen scientists” on Planet Hunters to break down the data. Sometimes these citizen scientists help dig through data that just doesn’t make sense, like the unexplainable, most likely natural, and possibly extraterrestrial happenings around star KIC 8462852.

Unusual light activity coming from KIC 8462852 has raised more than a few questions. A group of Yale University astronomers investigated and published a study looking into possible explanations for extreme dips in brightness. Wavering brightness could be caused by rock buildup, large-scale impacts much like the one that created our moon, faulty equipment or, although not even mentioned in the official study, giant alien satellites.

“We’d never seen anything like this star,” Tebetha Boyajian, a postdoc at Yale, told The Atlantic. “It was really weird we thought it might be bad data or movement on the spacecraft, but everything checked out.”

The paper focuses on naturally occurring scenarios, but Boyajian said that there were “other scenarios” that were considered.

Jason Wright, a Penn State University astronomer, is focusing on the possibility of orbital mega-structures made by extraterrestrial intelligent life forms. Wright is working on a paper that looks at constructed satellites, perhaps giant solar energy collectors, as the reasoning behind the varying light readings. Wright, however, is quick to be distanced from UFO speculators and Area 51 conspiracy theorists.

“Aliens should always be the very last hypothesis you consider, but this looked like something you expect an alien civilization to build,” Wright said.

To understand Wright’s line of inquiry, it’s necessary to understand how astronomically far the brightness dropped. Jupiter is the largest planet in our solar system, and would dim emitted light by around 1 percent. The light coming from KIC 8462852 dimmed by 22 percent.

KIC 8462852 is a mature star, therefore dust and debris should be settled by now. It is possible that a different star drew a mass of comets into KIC 8462852’s system and caused the difference in light, but the odds of that happening at the same time that humans developed the technology to observe such a phenomenon would be an almost unimaginable coincidence. So, naturally, more theories needed to arise, and Wright threw his hypothesis into the mix.

Wright and Boyajian are teaming up to work on the alternative, more science fiction sounding, paper. Joining them is Andrew Siemon, from the Search for Extra-Terrestrial Intelligence, or SETI, Research Center at the University of California, Berkeley. Together the group is drafting a proposal to search for radio waves associated with intelligent activity using a powerful radio dish in January. If their notions are supported by this preliminary evidence, they will move on to even more powerful equipment.

Until then, the three scientists and the team of enterprising citizen scientists will have to keep speculating and keep dreaming.