The president was attending a state event at the Japanese prime minister's home when he came down with a case of stomach flu. 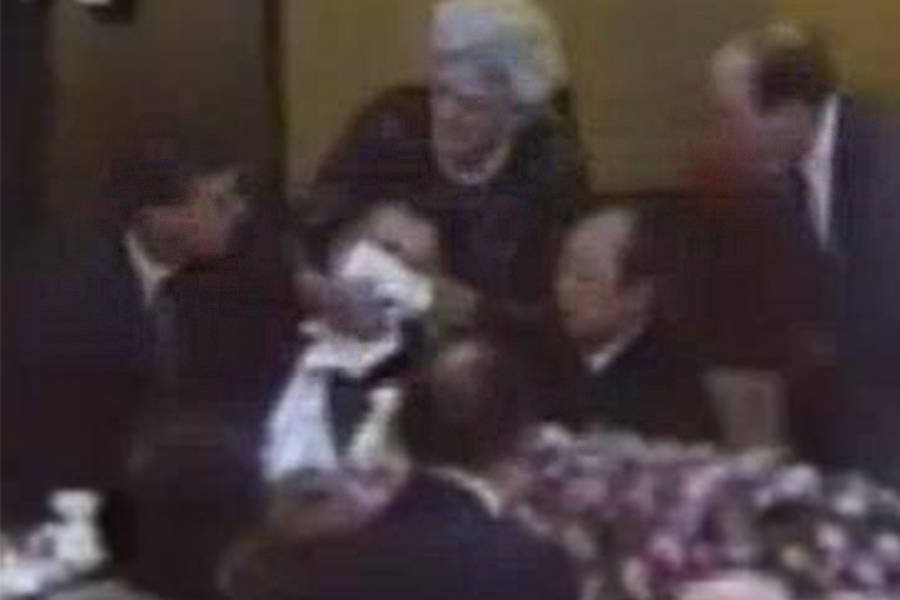 Wikimedia Commons
A still from a Japanese news reel, which captured Barbara Bush tending to her ill husband as he bushusuru-ed.

On Jan. 8, 1992, President George H.W. Bush caused a commotion when he passed out at a state event in Japan. Though not quite on par with the political scandals that the United State is used to now, Bush’s mishap left quite a mark on the Japanese people.

Thanks to the incident, the Japanese instantly had a new saying: bushusuru. It literally means “to do a Bush.” What Bush did that evening was to vomit in, and pass out on, the lap of the Japanese prime minister in front of 135 emissaries. Since then, bushusuru has come to denote vomiting in a very public place.

Bush Does A Bush

In January of 1992, President George H.W. Bush was nearing the end of his 12-day trip through Asia. The purpose of the president’s 26,000-mile tour was to promote free trade and American exports abroad.

The trip had gone well up until the evening of Jan. 8. President Bush had been exercising regularly, jogging and using an elliptical at hotels throughout Asia. Just that morning he had engaged in a doubles tennis match with the emperor of Japan, his son the Crown Prince, and the former U.S. ambassador to Japan. Though the emperor and his son had beaten the president, there was no indication that Bush was ill.

That night, however, at a state dinner held at Prime Minister Kiichi Miyazawa’s home, Bush was looking rather pale. As toasts were given around the room, live television cameras fixated on the president.

Suddenly, as Miyazawa was looking the other direction, Bush slumped over and fell into Miyazawa’s lap, vomiting and seemingly unconscious. First Lady Barbara Bush immediately jumped into action and pulled her husband out of the shocked prime minister’s lap. As Secret Service agents rushed to his side – some of them vaulting over the dinner table to reach him – Mrs. Bush pressed a napkin to her husband’s mouth.

As the Secret Service agents took over, the First Lady stepped aside and let them help the president to the ground. Prime Minister Miyazawa knelt down and cradled the president’s head in his hands until Bush regained consciousness.

A few moments later, the president stood up of his own accord and waved for the cameras. He appeared to be fine, and was escorted out by Secret Service. No ambulance was necessary, and Bush was taken back to the apartment he had been staying in, where he was examined by a doctor. The official diagnosis was the stomach flu, and after a night’s rest Bush resumed his tour the next afternoon. 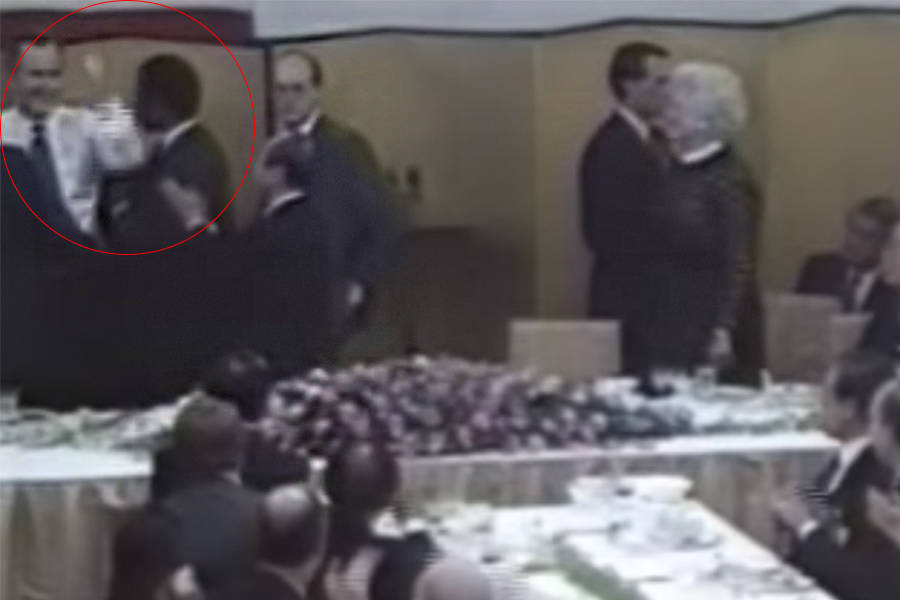 Bush stood a few moments after fainting, and waved to the crowd.

Despite his clean bill of health from the doctor, Bush’s episode quickly became international news. The Japanese immediately found themselves with a comical new slang term, bushusuru which literally means “to do a Bush.” By the end of the month, people were using the term on nights out to warn their friends of piles of vomit in the street as a joke about the U.S. president.

To add to the debacle, a few minutes after the footage had aired of the president being led out of the dinner, a man posing as Bush’s physician called CNN to report that Bush had died. A CNN employee quickly entered the information into a database shared between CNN and CNN Headline News, and Headline News almost aired it before it could be confirmed.

The Secret Service found the man, James Edward Smith from Idaho, before the story went to air. Smith was subsequently questioned by the Secret Service and hospitalized for a mental evaluation.

The incident also made its way into the hands of comedy genius Lorne Michaels, who turned it into a hit comedy sketch for Saturday Night Live.

The sketch spoofed the president vomiting on the prime minister, while Barbara Bush crawled across the table, echoing Jackie Kennedy crawling across the back of the limo after the JFK assassination.

Today, the president’s bushusuru lives on as yet another comical, harmless presidential blunder, of which there are many. According to USA Today, it’s even in the top 25 public meltdowns of the past generation.

Next, read about how George H.W. Bush was almost cannibalized during World War II. Then, check out the origins of these popular slang terms.