California's third-largest city – the 34th-largest in the country – is a near-ghost town. Where did California City come from, why is it so empty, and what lies in store for this odd collection of paved roads in the desert? 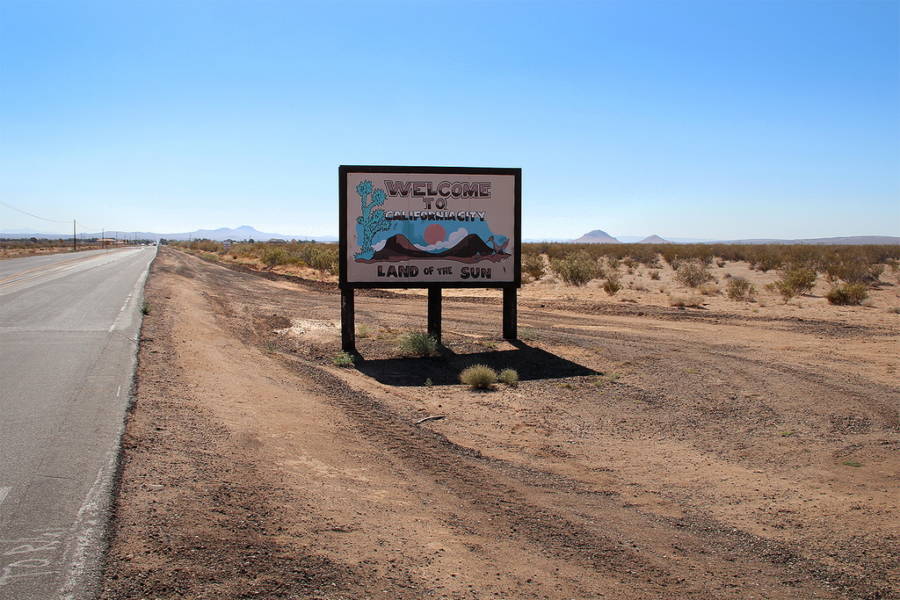 Far out in the high desert of Kern County, California, southwest of Death Valley and just north of Edwards Air Force Base, lies an odd collection of empty streets and unbuilt house lots that make up California City.

California City started in the 1950s with the highest hopes, and it was originally intended to rival Los Angeles in size and population, but lagging development and an unfavorable environment disappointed its developers.

By 1980, the town had tens of thousands of quarter-acre plots and hundreds of miles of paved roads that led to nothing but empty cul-de-sacs. Geographically, California City is the state’s third-largest incorporated city, and its vast, never-settled streets stand today in mute testimony of the dreams of its founders.

High Hopes In The Desert

Wikimedia CommonsCompletely empty and unmarked streets lie unvisited in the desert. All of California City’s empty roads have names, map designations, and other markers of a city – just without the people or the buildings.

California City had its origins in the state’s postwar real estate boom. For several decades, a booming economy and soaring population drove California’s home prices through the roof.

The first wave of returning servicemen, flush with VA mortgages, drove rapid expansion in Los Angeles and the Bay Area. The second wave was of families from all over the United States looking to send their teenage children to California’s tuition-free universities. The third was a tsunami of tech experts who would found Silicon Valley and drove prices higher than anyone could have foreseen a few years earlier.

Furthermore, large-scale immigration from Mexico during this period added to a general housing shortage that boosted prices higher still.

In this environment, it was virtually impossible to lose money investing in real estate. All anyone had to do was to buy a few thousand acres of worthless scrubland, secure access to the state’s all-important water vouchers, and sell the property in quarter-acre units to new arrivals.

That was sociology professor Nat Mendelsohn’s plan when he bought up 80,000 acres of completely inhospitable dirt in the empty Mojave Desert.

Mendelsohn and his family had immigrated to the United States in 1920, from Czechoslovakia. He had always been a gifted student, and his background could hardly have been better for a future town father. Trained in sociology, he specialized in rural land use, which he both taught and applied during the war as a government analyst studying farm profitability.

He developed a lot of ideas about how rural communities thrive, and after the war, he got a chance to found a small town in California called Arlanza Village. Mendelsohn made a success of this venture by activating an abandoned Army industrial park and turning it into a factory to provide jobs.

That attracted new residents to Riverside County, which fueled the steady growth of his town. Arlanza Village had been a collaborative affair, with multiple investors and speculators having a say in how it was organized, but the open tracts in the Mojave promised Mendelsohn something he couldn’t have in over-settled areas: total control. 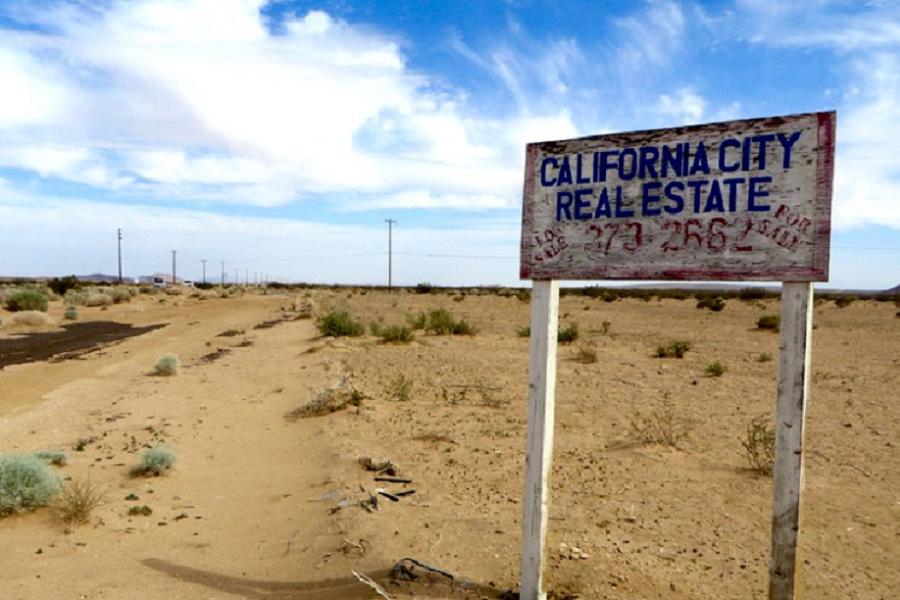 In 1956, Nat Mendelsohn used the considerable funds at his disposal from previous land deals to buy up the enormous M&R Ranch near Mojave, California. At a glance, the site looked promising. The ranch was watered by 11 abnormally productive wells that never seemed to run dry, and irrigation from these watered fields full of alfalfa that stood out against the dusty plain.

For two years, Nat would walk the grounds of his dream city and sometimes camp on a high place he named Galileo Hill. By 1958, Mendelsohn’s dream city had been plotted out. The site was to be organized around an artificial lake and several parks, with scores of large suburban neighborhoods winding around the city core like the layers of an onion.

By the time brochures went out to prospective homebuyers that year, crews were at work clearing brush and paving roads. Most of the streets in California City had names before the ground was broken on a single house. Signage was put up, realtors were contracted, and Mendelsohn thought he only had to wait for the money and residents to start rolling in.

It wasn’t to be. Unlike Mendelsohn’s earlier projects, which had been in reasonably easy to reach places like Riverside, California City was way out in the desert and very far away from anything anybody would want to live near. There was an airbase, but it had housing of its own for its staff and their families.

Worse, Mendelsohn’s enthusiasm was sabotaging his project. Every lot that was cleared for construction, without an actual house being built on top of it, was nothing but a big patch of exposed dirt.

When the Santa Ana winds kicked up, this dust swept through town like a Middle Eastern sandstorm. More than a few potential residents decided against living so far away from civilization if the place they were moving to looked like a dust bowl. Some parts of town picked up residents, but it was only a fraction of what Nat had been hoping for. 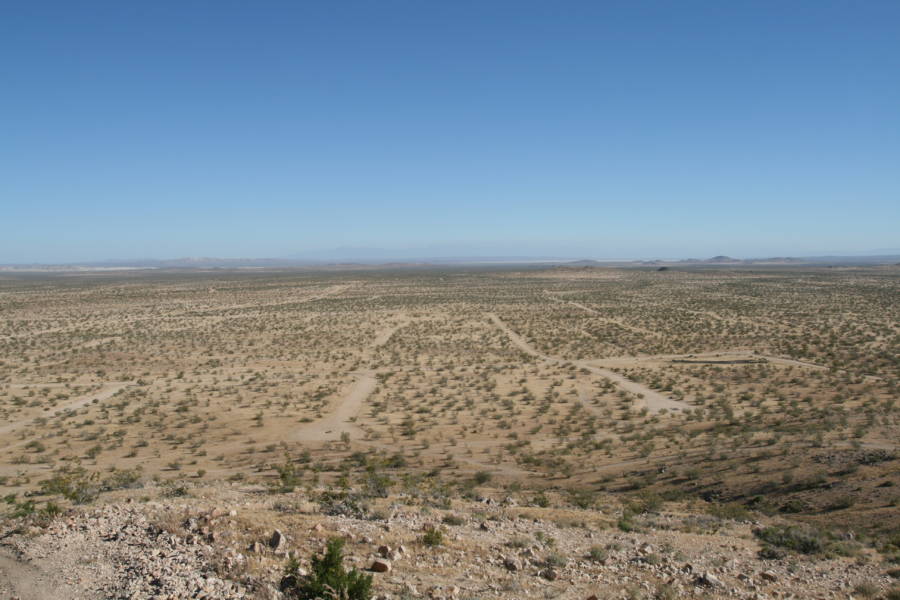 California City celebrated several milestones before its shortcomings became clear. The town’s first post office opened in 1960, and soon after it got a ZIP code. Incorporation followed in 1965, when Mendelsohn was still making frequent trips to Galileo Hill to set up his telescope and gaze at the stars (no people, therefore no light pollution).

As an incorporated city, the town could start its own police and fire departments, which it did almost immediately, despite having a population of fewer than 1,000 people. Still, people steered clear of the oddly hopeful city in the desert, and gradually Mendelsohn’s visits became less common.

California City went through a shakeup in 1969, as its population crested 1,300 for the first time. Thoroughly fed up with wasting money on a patch of barren desert that was bigger than some federal parks, Mendelsohn sold his controlling share in the town to a consortium that year. For the last 15 years of his life, Mendelsohn rarely brought up the one major failure of his life.

The city didn’t just go away because its founder gave up. In the 1970 Census, California City was recorded as having 1,309 people living there. By 1980, that had doubled, to 2,743. The town doubled again in the next 10 years, to 5,955. It seemed as if Mendelsohn’s dream had just been a little ahead of its time, and that California City would double its population every decade until it really was a rival of Los Angeles.

That still wasn’t to be, however. As the population grew, water from those miracle wells started running out, and water vouchers from the state got more expensive. 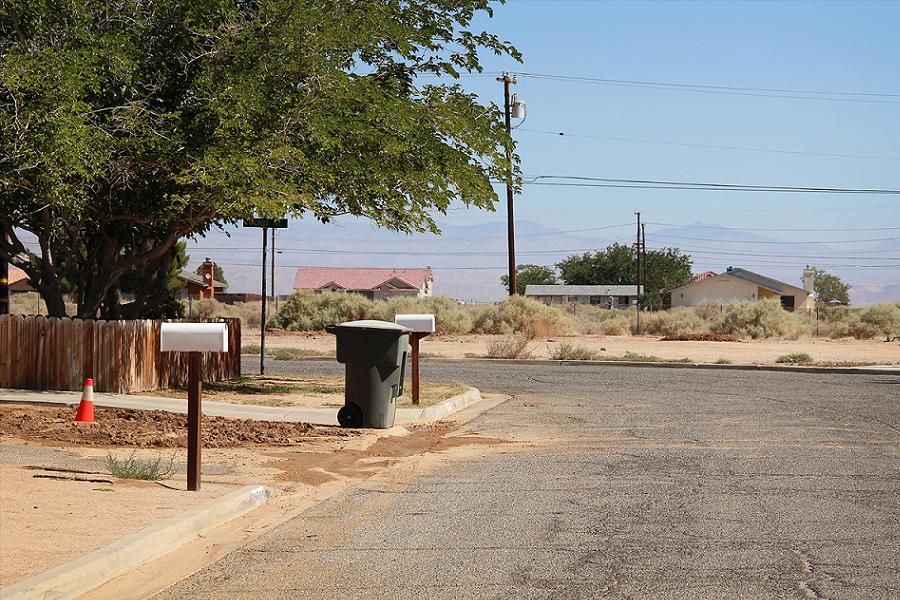 It goes without saying that nothing in California every really goes away, no matter how ridiculous it is. This is even more true when there’s equity at stake.

The people of California City, like Canadian ultra-nationalists, grew to be proud of their odd “little” town’s quirks, such as the endless miles and miles of slowly crumbling boulevards nobody has ever driven on, and so they stayed.

At some point, the Corrections Corporation of America blessed the town with a jobs-generating prison nearby, and canny developers turned the town’s lakefront property into something nice that could be found in any city. Approaching its 60th year since the first disappointed family bought into the community, California City now has two AAA ball teams and perhaps a bit more open spaces than most towns.

California City still controls the enormous wastelands around the civilized core. In any other part of California, these would have long ago been settled by tech workers who don’t mind a three-hour commute for a chance to save $50,000 on their mortgages, but the very remote and harsh environment of the city, combined with the tenacity of its political leadership, have worked to keep the town in business from the beginning.

Believe it or not, the town’s leadership still seems to think there’s a chance that California City may yet grow to the size of Los Angeles, a city that’s roughly half the size of Belgium already.

For more from the strange side of California, check out the peculiar towns of Zzyzx and Colma, the city of the dead.