Giant Camel Bones In Mongolia Indicate That Early Humans Hunted Them 27,000 Years Ago

Camelus knoblochi lived out its final days in Mongolia — and may have been prey for our human ancestors. 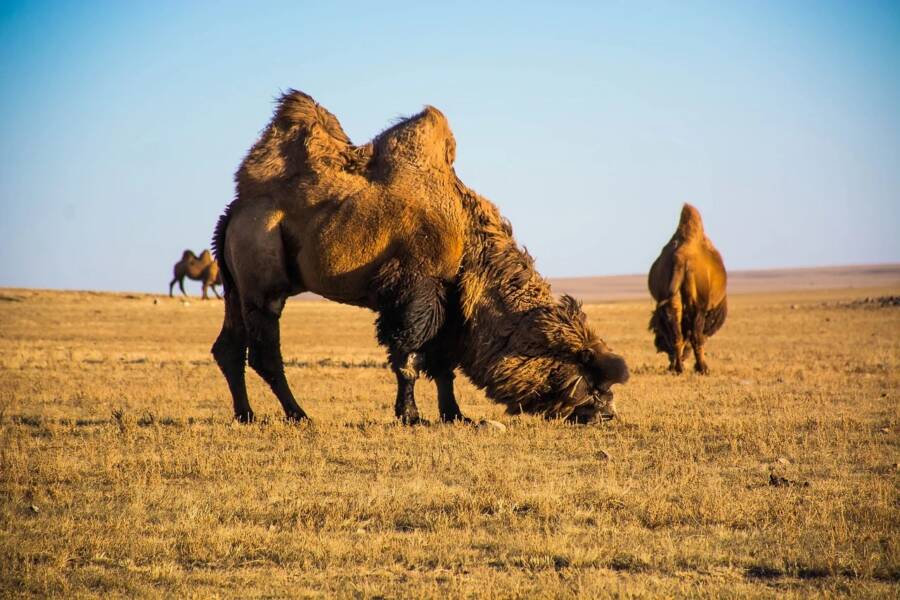 PixabayC. knoblochi was a shaggy, two-humped camel that was twice the size of its modern relatives.

New research by archaeologists in Mongolia, Russia, and the United States is revealing previously unknown information about the ancient giant camels that once roamed the Central Asian grasslands.

Recently published in Frontiers in Earth Science, the study looks at Camelus knoblochi, a species of giant camel that scientists now believe coexisted with early humans and other wild camels that still live in Asia today.

While remains of C. knoblochi have previously been found across Asia, from the Caspian Sea to Siberia, the study’s authors believe that Mongolia was the last home of this giant species before it went extinct.

Dr. John W. Olsen, co-author of the study and Regents’ Professor of Anthropology at the University of Arizona, says, “Here we show that the extinct camel Camelus knoblochi persisted in Mongolia until climatic and environmental changes nudged it into extinction about 27,000 years ago.”

Camelus knoblochi roamed the Central Asian steppes for 250,000 years. The creature was nearly 10 feet tall and weighed more than 2,200 pounds, nearly double the size of modern wild camels. The shaggy beast had two humps and feasted on grass and other plants.

Olsen, along with the other authors of the study, posits that climate change led to the giant camel’s demise toward the end of the last Ice Age.

In the Late Pleistocene era — between 129,000 and 11,700 years ago — Mongolia’s climate became more and more arid, slowly changing from steppe, to dry steppe, and then to desert. These new conditions made it harder for the huge C. knoblochi to survive. 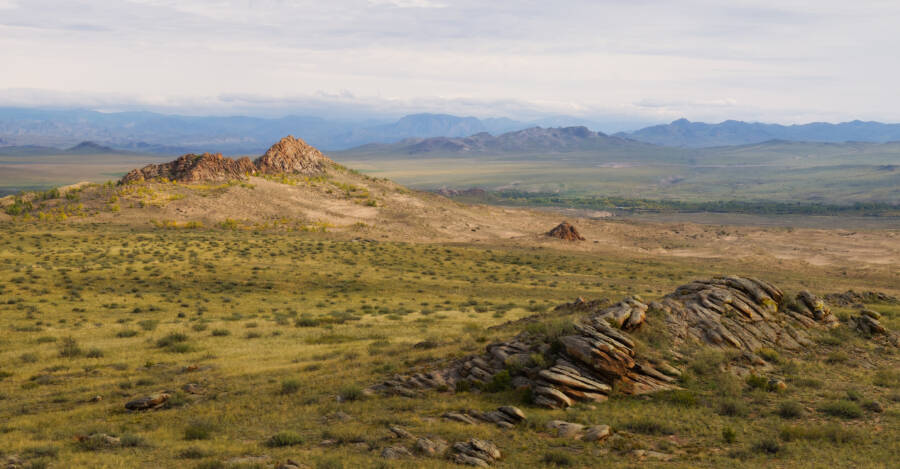 Wikimedia CommonsThe grassy steppe lands of Mongolia eventually turned to arid desert as the Earth’s climate warmed at the end of the last Ice Age.

As reported on Frontiers‘ blog, the study’s authors explained, “Apparently, C. knoblochi was poorly adapted to desert biomes, primarily because such landscapes could not support such large animals, but perhaps there were other reasons as well.”

They list these potential reasons as: “the availability of fresh water and the ability of camels to store water within the body, poorly adapted mechanisms of thermoregulation, and competition from other members of the faunal community occupying the same trophic niche.”

This is the first time fossilized remains of C. knoblochi have been found in Mongolia. Archaeologists analyzed five leg and foot bones from C. knoblochi that were discovered in the Tsagaan Agui Cave in southern Mongolia in 2021 as well as one that was found in the country’s Gobi Desert.

The fossilized bones were found alongside the remains of other animals that roamed Central Asia at the time, such as wolves, cave hyenas, rhinoceroses, wild horses and donkeys, and Mongolian gazelles.

The wide assortment of bones suggests that C. knoblochi lived in a moist steppe environment consisting of lowlands and mountains rather than the arid desert that covers much of Mongolia today. 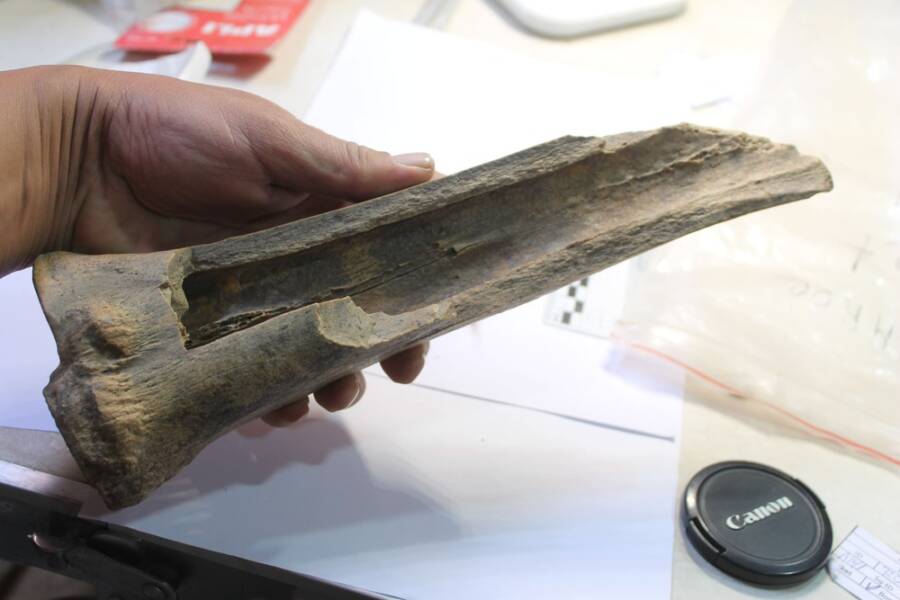 Russian Academy of Sciences Institute of Archaeology and EthnographyThe metacarpal bone of a giant camel was found in a Mongolian cave alongside the remains of other ancient creatures.

Dr. Alexey Klementiev, the study’s lead author and a paleobiologist with the Siberian Branch of the Russian Academy of Sciences, states, “We conclude that C. knoblochi became extinct in Mongolia and Asia … as a result of climate changes that provoked degradation of the steppe ecosystem and intensified the process of aridification.”

However, the authors put forward other reasons that may have contributed to the species’ extinction as well — and one of them is human interaction.

C. knoblochi lived alongside modern humans and potentially Neanderthals and Denisovans — two species of archaic humans — as well. Human hunting and scavenging may have easily contributed to the camel’s already declining numbers.

This theory is due to one of the front leg bones from C. knoblochi that was found in the Tsagaan Agui Cave. It dates to between 59,000 and 44,000 years ago and shows traces of butchery from humans as well as signs that hyenas gnawed on it.

Exactly how these wild camels and humans interacted isn’t completely known, but what is clear is that they were crucial to human existence. Domestic camels were and still are used for transportation, but scientists don’t think C. knoblochi served the same purpose. 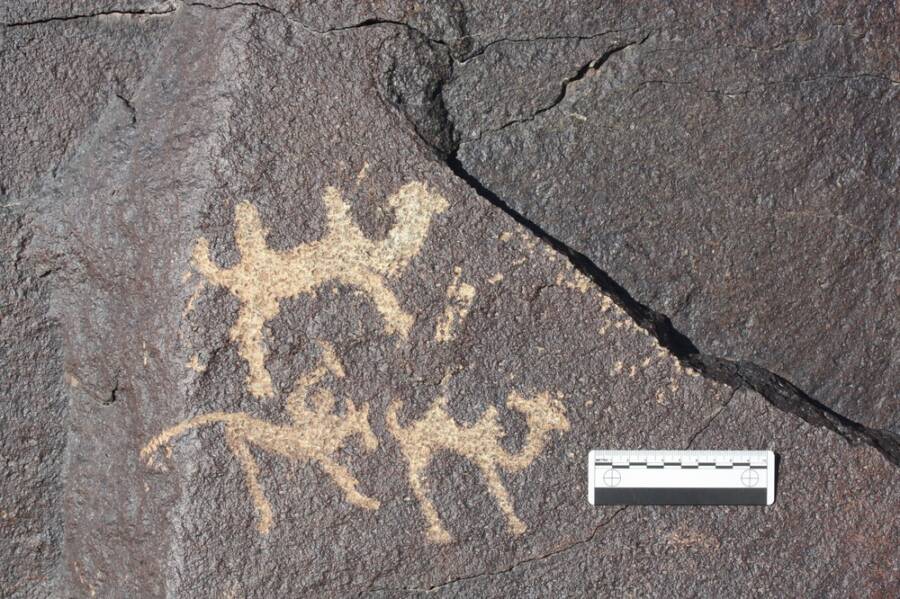 Frontiers in Earth SciencePrimitive carvings of camels have been found in caves in Mongolia’s Gobi Desert.

C. knoblochi was a close relative of and lived alongside C. ferus, the same species of wild Bactrian camel that still roams parts of northwestern China and southwestern Mongolia today.

Co-author Dr. Arina M. Khatsenovich, senior researcher at the Institute of Archaeology and Ethnography at the Russian Academy of Sciences, explains, “We don’t yet have sufficient material evidence regarding the interaction between humans and C. ferus in the Late Pleistocene, but it likely did not differ from human relationships with C. knoblochi — as prey, but not a target for domestication.”

The two wild species likely provided meat to humans, and hunters would have also harvested their leather, fur, and bones for tools and clothing.

Today, C. ferus is critically endangered. Ideally this new research on the extinction of C. knoblochi will help scientists discover ways to prevent their smaller cousins from heading in the same direction.

Next, read up on the 8,000-year-old camel carvings discovered in Saudi Arabia. Then, find out more about the world’s largest dinosaur footprint that was found in Mongolia.