Affectionately dubbed "Pink Floyd," Flamingo No. 492 escaped from a zoo in Kansas in 2005 and has been on the run ever since. 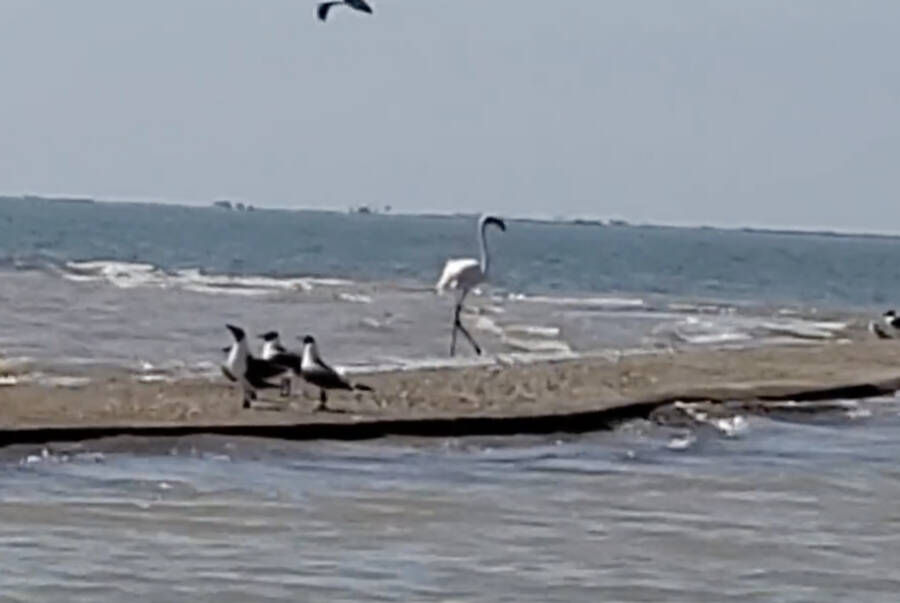 Texas Parks and Wildlife DepartmentThe flamingo known as No. 492 was captured on video by fishing guide David Foreman on March 10.

In 2005, two flamingos flapped their wings on a stormy night and escaped from the Sedgwick County Zoo in Wichita, Kansas. Despite the bands on their legs identifying them as No. 492 and 347, the African birds were now free and gone with the wind. But one of them was just spotted in Port Lavaca, Texas.

According to the Associated Press, David Foreman filmed the bird traipsing around Rhodes Point in Cox Bay on March 10. The machinist and fishing guide was baffled, as flamingos don’t exist in the local wild.

“My brain was telling me, ‘No way you’re looking at a flamingo,’ but my eyes were telling me, ‘That’s what it is, there’s no mistaking it,'” recalled Foreman. “It’s almost like nature’s way of putting me in my place. Mr. Knows-Everything thinks there’s no flamingos in Texas? Have a look at this.”

Foreman sent his video to the Coastal Fisheries Division of Texas Parks and Wildlife, which identified the flamingo’s leg band and confirmed the bird as the fugitive from Kansas, who has affectionately been dubbed “Pink Floyd.” 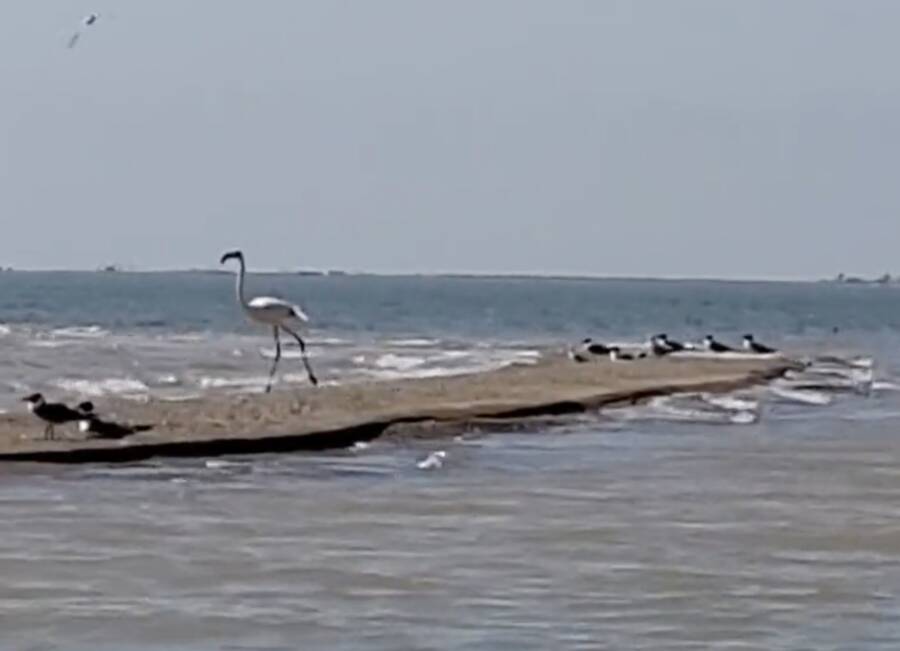 Texas Parks and Wildlife DepartmentThe bird had previously palled around with a Caribbean flamingo that was blown north during a tropical storm in 2006.

According to The New York Times, the bird was captured in the Tanzania wilderness in 2000. In 2003, wildlife officials transported it with 39 others to Wichita, where it annually had its wings clipped to keep it grounded. However, when the zoo forgot to do so in June 2005, the bird took off from its enclosure.

Zoo officials tried for a week to recapture it. But after another storm the night before the Fourth of July, No. 492 finally headed out of the city for good — on Independence Day.

While Flamingo No. 492 and 347 escaped before they had their wings clipped, that process is painless. As curator of the birds at the Sedgwick County Zoo, Scott Newland said it felt “no different than you or I getting a haircut,” according to The New York Times. The process must be repeated annually to prevent the birds from growing new ones.

Newland himself was present when the batch of 40 flamingos arrived in 2003. Newland believed that most of them were three years old at the time, with officials estimating that No. 492 is currently around 20.

While fellow escapist No. 347 followed suit, the two birds fatefully diverged. No. 347 flew north and was never seen again, with officials somewhat confident that it succumbed to the elements. No. 492, however, is not only visibly thriving in the warm temperatures of Texas — but has been previously spotted with a friend. 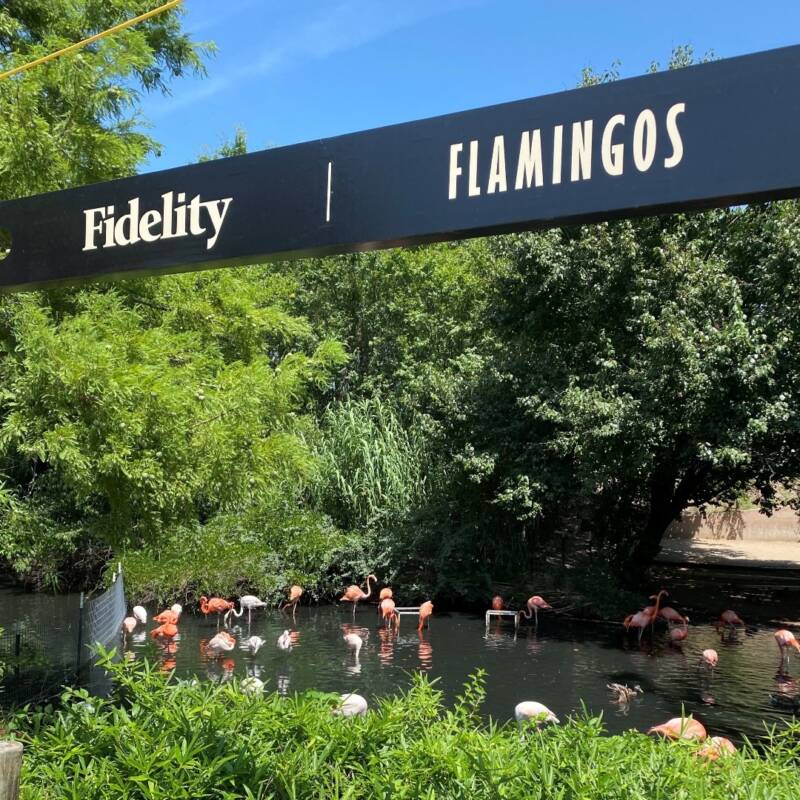 Texas Parks and Wildlife social media specialist Julie Hagen confirmed that No. 492 was spotted around Cox Bay during the same time of year once or twice before. It has not only relished in the salty and shallow wetlands of the region but has bandied about with a Caribbean flamingo blown north during a tropical storm in 2006.

“Even though they’re two different species, they are enough alike that they would have been more than happy to see each other,” said Newland. “They’re two lonely birds in kind of a foreign habitat. They’re not supposed to be there, so they have stayed together because there’s a bond.”

Unfortunately for Foreman, he didn’t get the chance to see No. 492 with its Caribbean companion. The tropical flamingo hasn’t been seen since 2013 and has possibly migrated for greener pastures. After all, flamingos have a lifespan of more than 40 years — and are far more resourceful than they might appear.

“It can move down into Mexico. It can move back up here,” Ric Urban, the Curator of Birds at the Houston Zoo told Houston’s KHOU. “They might look a little awkward getting off the ground, but they can travel 35 miles an hour. And travel over 350 miles.” 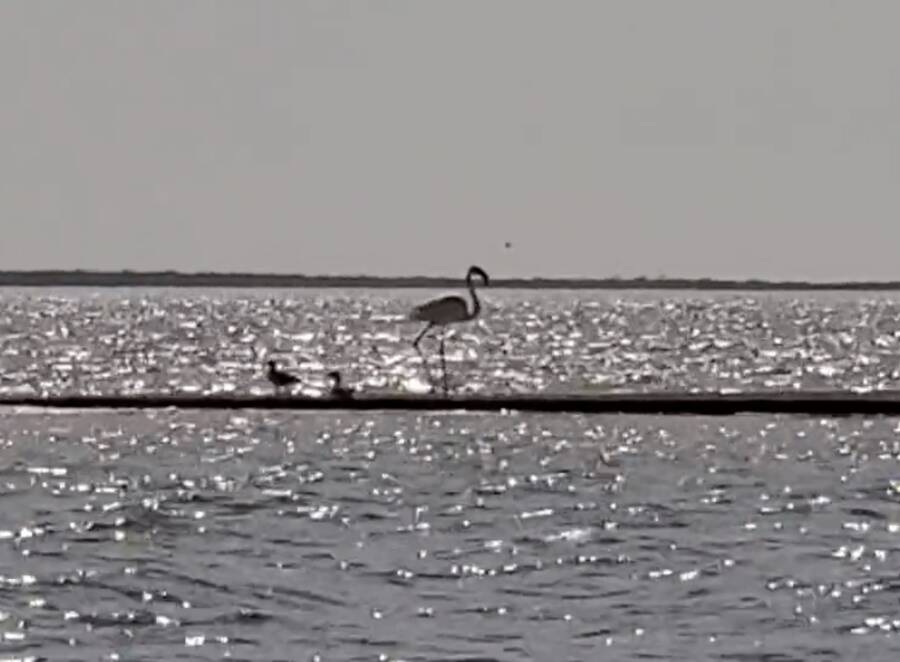 Texas Parks and Wildlife DepartmentFortunately for No. 492, there are no plans to recapture it.

According to KHOU, officials have stated that there are no plans to recapture it, as this would only disturb other wildlife. And while the flamingo has to keep a watchful eye on predators like bobcats and foxes, it’s entirely safe from hunters — since flamingos aren’t game birds.

Foreman’s sighting earlier this month was certainly one to behold. He had no idea how adventurous No. 492’s life was when he posted his captured footage on social media. Indeed, he was just shocked to have seen a flamingo, at all.

“A flamingo in South Texas,” he said. “Wow. Who would’ve thought.”

After reading about the runaway flamingo spotted in Texas after 17 years, learn about the rare “Blue Dragon” sea slugs that mysteriously keep washing ashore in Texas. Then, read about the pole-dancing monkey that attacked a child last Halloween.