The Incredible Story Of Rosie The Shark, The Preserved Great White Found In An Abandoned Wildlife Park

Rosie the Shark was caught in a family's tuna-fishing net in 1997 before being preserved in a formaldehyde tank and eventually abandoned. But now, she's finally being restored to her former glory. 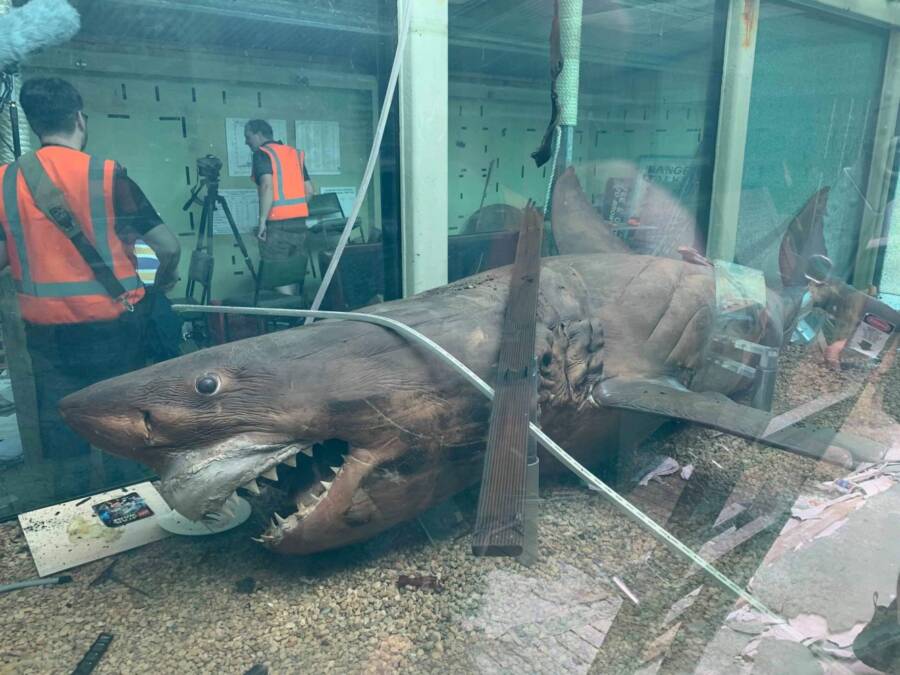 Crystal World and Prehistoric Journeys Exhibition CenterRosie the shark’s tank is being slowly refilled with glycerol as a safer preservative solution to formaldehyde.

The men who found her had no intentions of catching an apex predator, but Rosie the shark would die after breaching their tuna nets, nonetheless. Caught off the South Australia coast in 1997, the great white shark was an extraordinary two-ton beast with razor-sharp teeth — and would be gawked at for decades to come.

With a lifespan of 70 years, Rosie the shark had spent dozens of years traversing the ocean.

Nothing would compare to her journey after death, however, as high demand for her colossal body would turn her into a tourist attraction at the Wildlife Wonderland theme park — before the rise of social media made her famous.

Transported to the park in a refrigerated truck, Rosie the shark spent more than a decade in a custom tank flooded with formaldehyde. When the park shuttered, however, Rosie was left behind — until one urban explorer chronicled the well-preserved creature for the whole world to see online.

Rosie When She Was Still Alive

Australians first encountered Rosie the shark after she had bitten her way through a tuna pen off Louth Bay in 1997. With seafood companies and local divers relying on those waters, the regional government decided to hunt Rosie down. Initial plans included tranquilizing her, but Rosie’s species wasn’t actively protected yet.

It’s no wonder that the incident didn’t make a splash as big as the animal itself. There were only about 70 million people online that year, which appears a prehistoric figure in contrast to today’s 5 billion users. According to The Jawsome Coast by historian Eric Kotz, however, the shark’s journey had only just begun.

“She was stored in a freezer in Tulka after her death, but everyone wanted to see her,” said Kotz. “My brother said eventually the tuna company relented and put it on display and that thousands of people came to see it.” 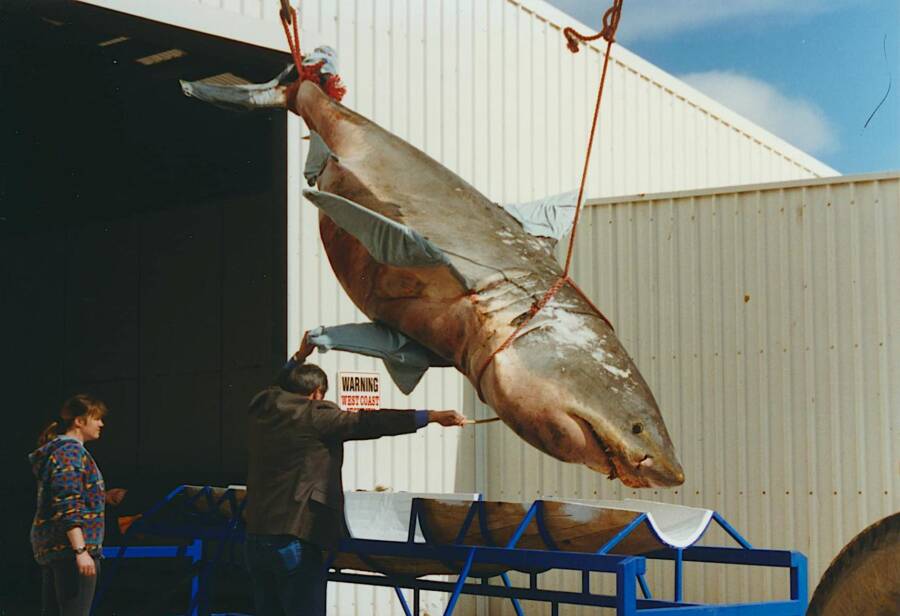 Crystal World and Prehistoric Journeys Exhibition CenterRosie the shark was transported from Louth Bay to Wildlife Wonderland in 1997 and to Crystal World in 2019.

Citizens and animal parks alike did indeed show great interest in the creature. While the Seal Rocks Life Center initially made an offer, they reneged — and led Wildlife Wonderland to fish Rosie from competitive waters. Loaded into a refrigerated truck, she made a 900-mile journey from South Australia to Bass, Victoria.

The government impounded her before she arrived, however, as a local woman had gone missing and all eyes turned to Rosie. A gruesome necropsy cleared her as a suspect before Wildlife Wonderland founder John Matthews stuffed her with dacron — and placed her in a giant custom-built tank full of formaldehyde.

Unfortunately for Matthews, Wildlife Wonderland lacked the proper licenses to own and display its creatures. Ordered to surrender all living animals in 2012, the park shut down. Rosie the shark was left abandoned in her tank, until urban explorer Luke McPherson explored the decaying venue and sparked renewed interest.

Rosie The Shark’s Return And Restoration

On Nov. 3, 2018, McPherson uploaded a video to his YouTube channel titled: “Abandoned Australian Wildlife park. Decaying, left to rot.” It has since amassed more than 16 million views and generated awareness for the abandoned shark. Unfortunately, that awareness also led to alarming vandalism.

Within months of the footage going viral, locals began trespassing onto the property. They damaged Rosie’s tank, sprayed graffiti onto the glass, and even threw a chair into the water. When the tank began leaking, police issued public safety warnings — with McPherson noticing carcinogenic fumes in the air.

“The fumes were so bad you couldn’t last longer than a minute in that room, the formaldehyde must have been evaporating,” he said. “The tank was huge and in bad condition, with a rusting metal frame and smashed panels of glass and trash thrown inside. Once I got the light behind the tank I was like ‘wow, that’s creepy.'” 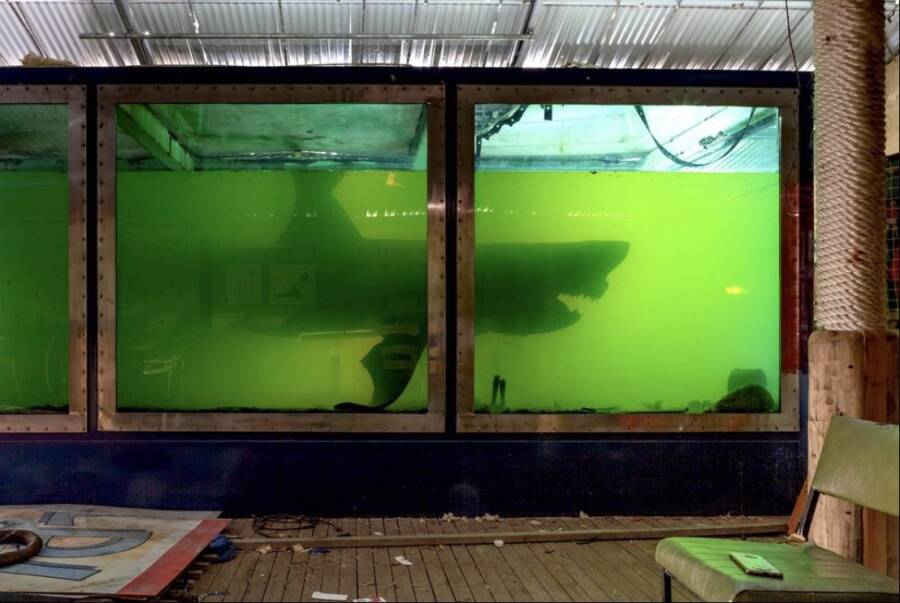 Crystal World and Prehistoric Journeys Exhibition CenterRosie the Shark in her tank at Wildlife Wonderland.

When the landlord started publicly considering destroying the animal, campaigns to “Save Rosie the Shark” began flooding social media. As the owner of the Crystal World and Prehistoric Journeys Exhibition Center, Tom Kapitany perked up in 2019 — accepting the $500,000 cost of transporting and displaying her himself.

“It’s a remarkable thing, for starters with all the vandalism and everything that has happened to the actual wildlife park and to Rosie’s tank,” said Shane McAlister, an employee at Crystal World. ”I had to go down there and do a patrol and make sure no delinquents were going to vandalize Rosie’s tank any further.”

In the end, Rosie’s story is far from over. While Kapitany flushed her vitrine of its toxic formaldehyde in the hopes of replacing it with a safer preservative solution, his GoFundMe campaign to finance 19,500 liters of glycerol to preserve and restore Rosie the shark has currently only yielded $3,554 of the $67,500 goal.

“To bring her back and actually put her on show for people is a once in a lifetime opportunity to do this and I’m just very blessed and proud to be a part of it,” said McAlister. “Rosie herself has had a pretty amazing journey.”

After learning about Rosie the shark, read about the exploding whale incident. Then, learn about 28 interesting shark facts that would surprise you.